i agree on that about de vries, mercedes have been very disapointing, looked so strong at the start. disappeared without a trace. but i guess that racing drivers love an excuse & that qualifying system does give drivers a perfect excuse for that

because the stats are there. (discounted Valencia as it was chaos) out of 9 races only twice has a driver made superpole from group 1 (monaco friyns, evans & NYC 2 evans) & only 3 times have they made the podium (Rome 1 Bird, Evans, Monaco friyns, evans, & NYC 2 Da Costa)

Contributor
I sort of agree about the criticism of the quali format. Kind of. I think the closeness of the cars and drivers makes it seem more of a problem than it is. If they ran the same system in F1 would we really not get Hamilton and Verstappen at the front? I doubt it.

I think it's all part and parcel of Formula E. You have to take your wins when you get them and then work to stay in the title fight. I dunno. Maybe it's me, but as I've said before I think the format is what makes Formula E interesting. You never know who is going to be fighting at the front from week to week. I never would have called Cassidy being so much in the action or Envision being the team to lead the drivers championship.

its working out for bird as too often he starts well & falls apart. this time its the season in reverse. i think it wouldnt make much difference as they did in 2004 but Schumacher took 4 of 1st 5 poles & most dominant year

but i like the identical cars. as most of best series have them but ill like to see them try it for a season maybe 2 12's like in indycar 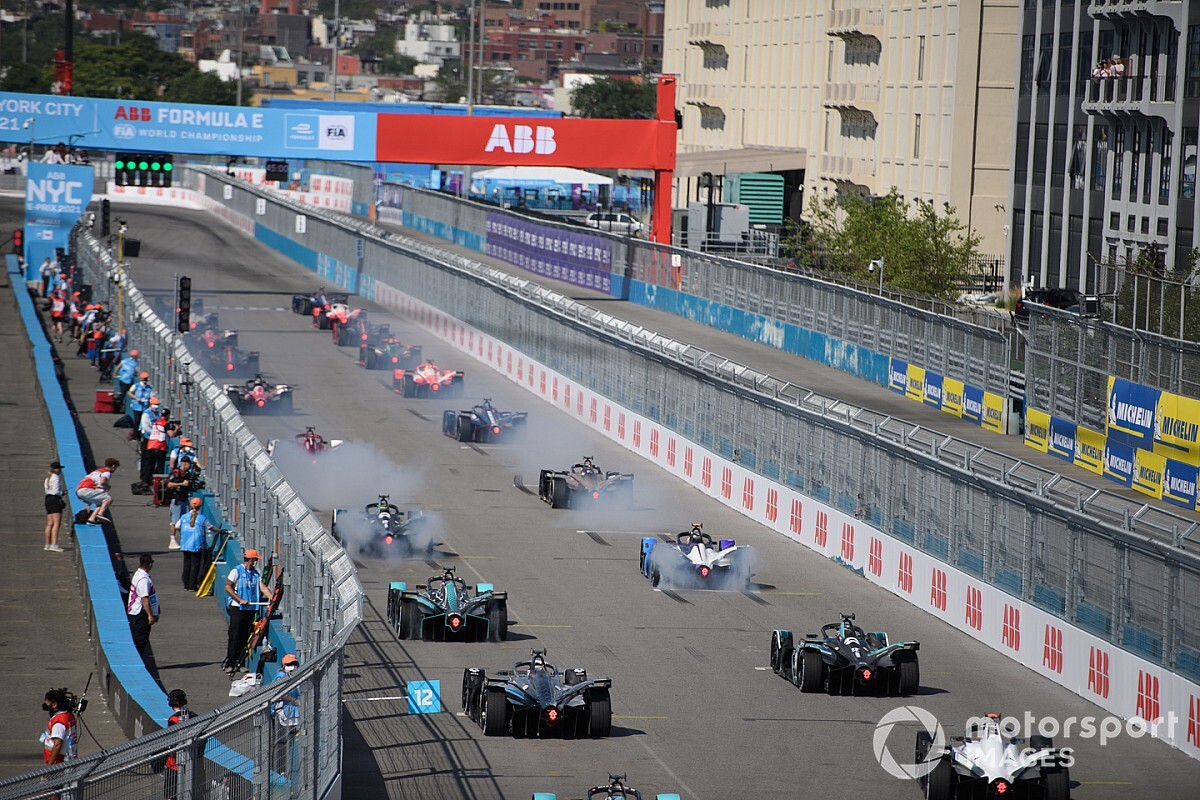 The FIA have responded to the concerns of Formula E teams that the London E-Prix double-header could produce sterile or crash-strewn racing by slashing the available energy levels.

well that song by raye, who i like a couple of songs to i think review the 2021 calendar. was good but still awkward

Valued Member
Good race, shame it wasn't wetter outside as the practice sessions proved a real test for the drivers. I think there will be rain tomorrow.

Formula E should congratulate whoever came up with the idea running part of the track indoors, I know F1 would never try anything this radical (and there would be problems with the exhaust emissions). FE isn't frightened to try something new and it's great to see the teams going along with those who run it.

Valued Member
Race 2 didn't disappoint, lots of incident and some controversy. Track it down on the iPlayer if you can.

i always say about spoilers is that if your trying to avoid spoilers a Formula E Thread on a Formula E weekend, is the last place you should be

very impressive 2nd race from de vries only 3rd driver this season to make superpole & only the 5h driver to make the podium from group 1, but where has mercedes pace has returned from, that was 2 2nd places from de vries. in comparison before penalties his had best result from the last 6 races was 10th. then comes to london & his early season pace has returned. i know i say it every race & getting repetive i wasnt going to say anything, until i saw de vries post race comments & how he was on the podium. ill never get my head around how a driver can be upset, any driver in any other motorsport series leading the championship going into the final weekend would be over the moon. de vries was acting as if he's just been sacked & dumped at the same time

then wow, thought id seen everything in motorsport, nothing could surprise me, & what on earth was di grassi playing at. he just decides to blatantly cheat in front of everyone. the absoulte balls of the man. mcnish try to defend it as you would expect but its sporting principles & honesty. when they say follow the safety car, they didnt mean go in the pit lane to try & overtake everybody

then driving standards again. this is a

world championship. today ive seen better driving standards at the bumper cars. some of these need reminding of it.
Buemi & rast started it off with there shunt. where buemi rammed into rast & rast returned the favour
Rowland going full Kyvat & torpedoing into Vandoorne
Although the gap looked a bit narrow, no excusing Lotterer ramming him into the wall
Bird & someone else coming together into the wall

Contributor
Just caught up on all of them. Hells bells Formula E never disappoints on the controversy, incidents and talking points does it? I'm with FB on congratulating whoever came up with idea of half inside half out. Looked good and was great to see something new. Now where do I start on the racing?

I thought we were about to see the Da Costa show in Berlin again as he carved through the field in both races but then he got took out by Crasha Lotterer.

De Vries is obviously a secret CTA lurker because I was just having a pop at him about a week ago and then he puts in two quality drives. When he dials into the track he is awesome.

The silent assassin Robin Frinjs crept himself into contention in the championship again, Jake Dennis is a sensation, there were some terrible terrible terrible moves, Mitch Evans pulled off one do the best overtakes I've seen in Formula E, Audi and Di Grassi try to actually steel the race and then Alex Lynn celebrates his first ever win by dropping the F bomb live mid Sunday afternoon on Channel 4.

RasputinLives said:
De Vries is obviously a secret CTA lurker because I was just having a pop at him about a week ago and then he puts in two quality drives. When he dials into the track he is awesome.
Click to expand

he must be were slagging him.off after a very poor last 3 races & he goes takes 2 2nds & leading the championship 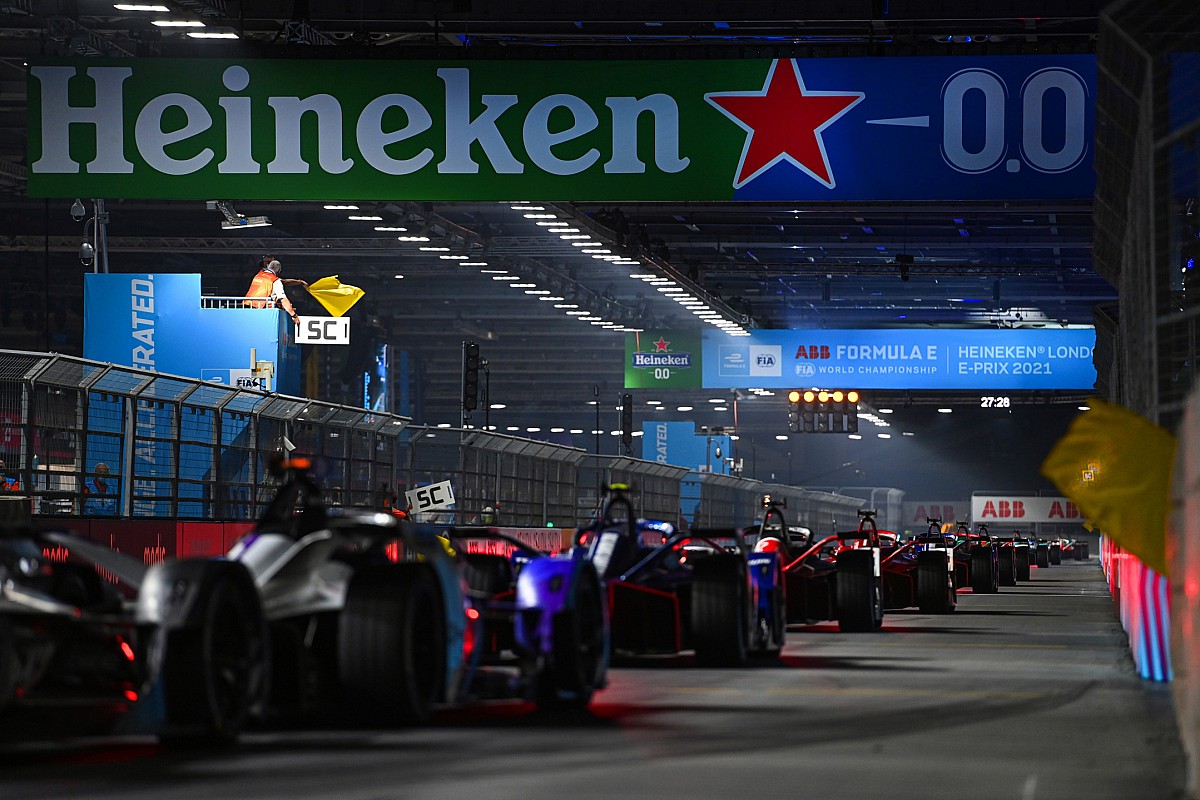 Lucas di Grassi has pitched a radical Formula E pre-qualifying concept to the FIA, headlined by drag races at landmarks like Buckingham Palace, to showcase cars “faster than Formula 1”.

Teams are pushing heavily for alterations to the current group system that disadvantages the points leaders, and they want a new format in place for next season - rather than wait for the advent of the Gen3 rules in 2022-23. Series boss Jamie Reigle has already confirmed to Motorsport.com that any changes will follow Formula E custom and are “not going to be conventional”, but there is little consensus between the championship, teams and the FIA as to what shape qualifying should take.
Click to expand

Di Grassi reckons organisers “are not even sure what they want” in respect to whether it is better for, as per this season, 18 drivers to remain in mathematical title contention ahead of the final round or push to create repeat winners who can be “heroes”.
“The [current] one-lap scenario is probably the worst of all the possibilities, so it needs to change. You [need to] completely think outside of the box," he told Motorsport.com.
Click to expand

Contributor
Funny it's Di Grassi pushing for it. He won't be in it next year.

RasputinLives said:
Funny it's Di Grassi pushing for it. He won't be in it next year.
Click to expand

its better than his idea to overtake the safety car 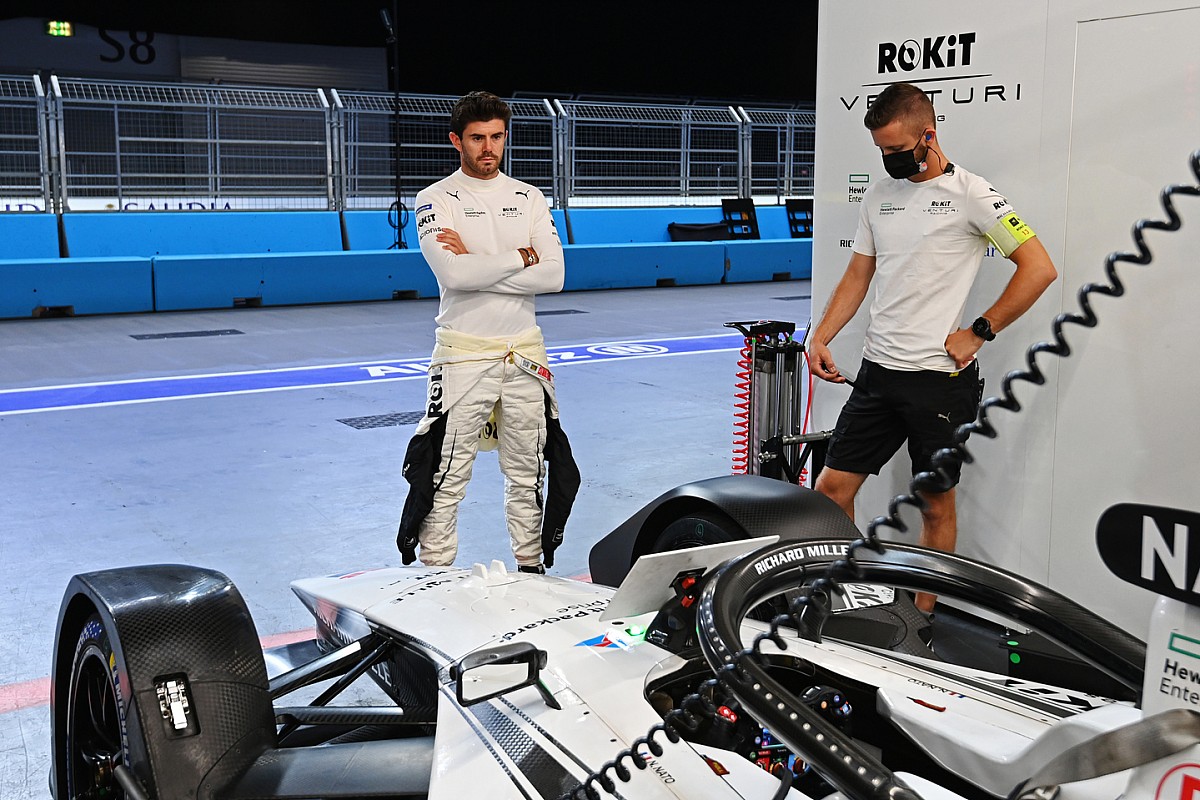 well im sure di grassi has no intention of leaving & wants to be involved its a good seat, venturi grown over the years as mortara has proven. surprising looking the lineup. im surprised at how few are confirmed, so seemingly there a few better seats out there if you want them. like rumours to believed a seat at virgin, mercedes & maybe andretti 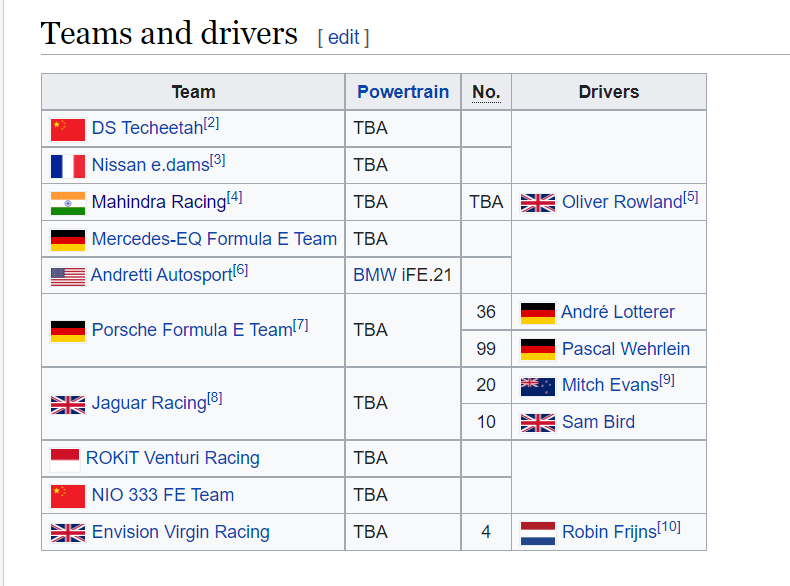 i was reading this, interesting in itself, 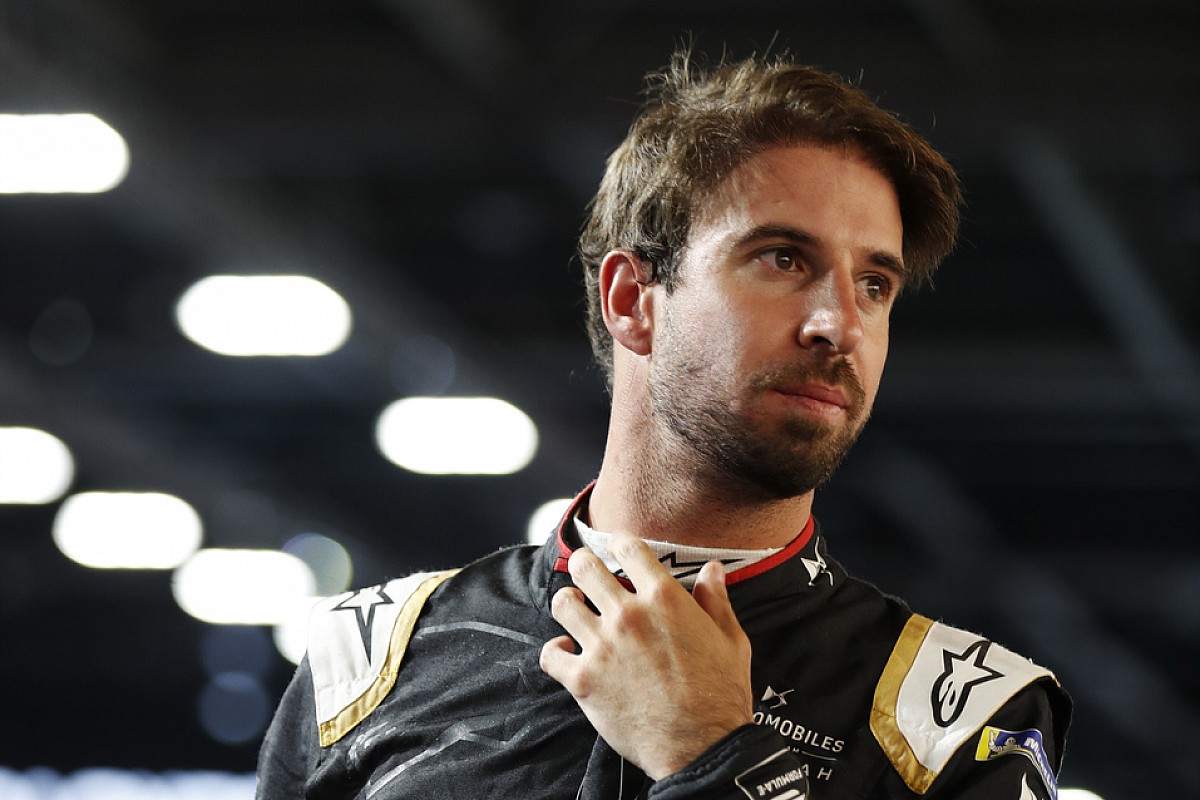 Antonio Felix da Costa has confirmed he’s “90 percent sure” he won’t race an IndyCar in 2022, and Rahal Letterman Lanigan co-owner Bobby Rahal has expressed his regret that the Portuguese ace couldn’t be won over.

Obviously he’s very good, isn’t he?” said Rahal, who as a driver won three Indy car championships and the Indy 500. “But I think he’s got opportunities in Europe, and not necessarily in Formula E, that are interesting to him. & I think if you’ve done 1 particular series for a while, you’re always looking for something different, & maybe something that’s also better than what you have already.

“I think IndyCar is definitely interesting to him but it’s one of a few series that interest him, and he has opportunities because his track record speaks for itself. He’s a sought-after driver by several teams in several series and with good reason"
Click to expand