Contributor
This is an exceptionally late thread start because I thought the race was next week. However I am wrong and Formula E's third round happens tomorrow on the streets of Santiago in Chilie. The track is different this year, which is a plus if it's stopped it running alongside that open sewer like it did last year. It was a really good race last year though with Teechetah dominating. JEV and co will be hoping for a repeat performance.

Two races into Gen 2 of Formula E and it seems that the new gen will bring us the same close action as Gen 1. It's quite clear there are two packages that are above the rest of the field (Teechetah and BMW) but they are struggling to take advantage of this mainly due to driver error and the qualifying format. The grids get so mixed up in Formula E because one lap pace goes against all other aspects that make you a contender in a race. Add to that the close street circuits and the fact you get one lap at 250kw (25kw than at anytime all race day) it leads to mixed up grids. Mixed up grids usually lead to good races. I imagine once again we'll see the likes of Turvey or Bird on pole when we know full well they don't have the race pace.

Which leads us on to our current championship leader Jerome D'ambrosio. Imagine you'd been drafted into an upper midfield team as the experienced driver to help shepherd the new young superstar but then found yourself leading the championship after two rounds? You'd be pretty ecstatic - and Jerome was, you only have to watch his celebrations last time out. I don't think D'ambrosio expects to challenge for the title but he also has nothing to lose so expect to see him pushing it at the front once again this time out. The real title challengers are Felix Da Costa and JEV - both of whom could be sitting here as two time winners. JEV is quite pragmatic and I don't expect him to feel the pressure took much. Felix Da Costa could be a different story. He's always been prone to crack under pressure and the quickness in which he accept responsibility for an accident that was clearly 50/50 makes me think his head might be going down. He really needs a bounce back this weekend.

Both need to get a move on because Marrakesh sent a clear message that Audi aren't there yet but they are coming and they are dragging their customer team with them. The question for me is how big a points gap they can build before Di Grassi and Bird get equal machianry. We saw the disastrous start Di Grassi had last year and he still pulled it back to be within spitting distance by the end.

As for the others? Jag need a win to justify involvement. HWA need some laps and to stop hitting each other. Nissan just need that little extra something to put them in the mix. Venturi need to be interesting, Dragon need to be noticed and NIO? Who?

Contributor
Having just watched qualifying live on my Facebook feed (wonders of the modern world) it seems Formula E has gone old school with a Di Grassi/Buemi front row! Wherein and Vandoorne in top six whilst Teechetahs and BMWs are in second half of the grid!

whats this brake issue with di grassi. as franchitti says that now they have to use the same per qualifying lap as in race

but i had wondered watching as i remember it being different. as this the one a few yrs ago where people kept crashing out of the lead. but i like the new location its very scenic in the park & reminds me if albert park a indy car circuit or a wider version of british one in that park

it was only a matter of time before Buemi took pole as they said. class is permanent form is temporary

I think I prefer this to F1 in its current state.

The coverage is amateur hour at it's very worst but it can't take anything away from how fun it is too watch.

Contributor
I can put up with the crap TV director if the racing keeps me hooked. Enjoyable race to watch and like all 3 races this year impossible to predict. Birdy always pulls at least one out the bag every year doesn't he? Put the pressure on Buemi and he cracked like a nut.

BMW and Teechetah screw themselves out of good results again. Still think they are fastest cars out there. Sims even managed to throw his podium away after getting a pen for stupid move on Mortara.

Bird with an ever improving car and one point off the title lead? Could this finally be his year?

I'll leave you with one question - if he'd never received a penalty how many race wins/championships would Lucas Di Grassi have?
Last edited: 26 January 2019

Contributor
Oh and nice to see Princess Pascal putting his money where his mouth is - even if he did still manage to be grumpy at the team in the interview afterwards.

The penalties that are being thrown around in FE are a bit ridiculous though; given that half the field were given some form of penalty, this suggests something still needs working on...

That being said, the race was much better than F1 currently.

Valued Member
Another fun race to watch. Poor old Stoffel if he didn't have bad luck he wouldn't have any luck at all.

Contributor
He has come out on twitter with an apology to the team for messing up! Retiring from 6th is a step up from retiring from 20th though.

yeah fantastic race interested looking on google maps it looks like they have only gone 3 miles south of the 2018 venue so that that big of an upheaval. I was gripped til 2 mins to go when weirlein had to go to survival mode. great win by sam bird it was a race that he was rarely the favourite as Buemi was favourite til he pushed the limit too far & weirlein with attack mode was favourite at the end

very nearly had 3 sort of F1 rejects win the 1st 3 races with felix da costa (sort of) d'ambrosio & weirlein/Buemi. but we had been spolit 3 great races & its unusual in most series that the winner last time out & championship leader would for majority be a backmarker on merit. considering the opening races its probally a blessing that d'ambrosio got moved up keeps the lead because to its seeming a curse on championship leader, reigning champion finishes 2nd in Saudi arabia but very eventful, felix da costa DNF taken out by teammate & d'ambrosio qualified 21st finishing fortunate 8th

I love F1 but do feel that this series is proof that F1 went the wrong way on aerodynamics, as less is better. as we dont get any of dirty air chat that is almost dominating feature of every weekend in F1 & I like the fact that drivers that had the talent but not the money get a chance to show their talent
Last edited: 27 January 2019

saw this yesterday & think this would be a shame if it wasnt used for caption competition. rita ora & alejandro agag 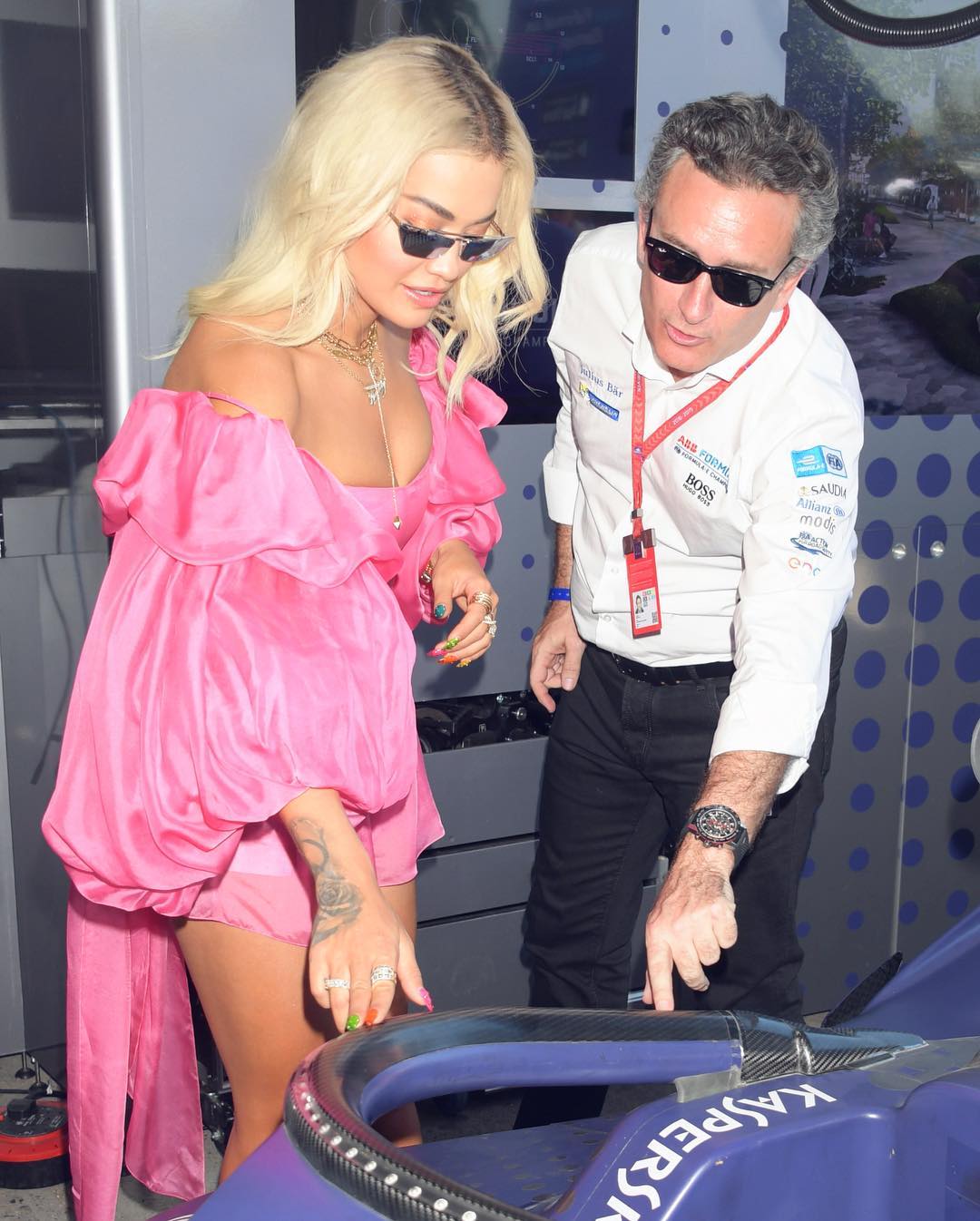 Contributor
AJ: "This is a Virgin"

RO: "So was Brooklyn"

Staff Member
Premium Contributor
Lewis Hamilton upset that no one recognised him as he visited the Formula E paddock and was shown around a car.

Just confirmed my suspicion that success is directly linked to insecurity.

Staff Member
Premium Contributor
Nah, as funny as that would be Andyoak my response above was a caption for the picture above that.

Contributor
So the reason so many people struggled for energy near the end of the E-Prix was because it was so ridiculously hot that the regen wasn't working as it should. Got me thinking. In hot conditions like that maybe they should put solar panels on the car and see what power they can get from that.

Could out a wind spinner on top of the cars in windy conditions too.