Contributor
So just 13 days after the race in Hong Kong Formula E arrives at the costal Chinese city of Sanya for round 6. Formula E makes quite a big deal of being born in China and has always had Chinese teams and tech, so no surprise it's opted for two races in a country of such massive size. What the attendance at these events are I don't know but I guess being in the centre of a populated area helps. After 5 rounds it really couldn't be any closer at the top with 2 points separating the top 4, 7pts between top 5 and, by my calculations, 12 drivers being able to lead the championship mathematical by the end of the race.

Sam Bird tops the championship despite losing the win in Hong Kong to a penalty. I think Sam knew he was going to get the penalty when he won so I don't think mentally it will effect him too much. However it will be interesting to see how the penalty effects the racing. Nudges like Bird on Lotterer have been pretty reg through the last 4 years so I wonder if drivers will be more cautious now. The surprise contender this year is Jerome D'ambrosio who continues to remain in touch with the title race, all this despite being at back of the grid for the last few races and going out on lap 1 in Hong Kong. I'm not exactly sure what was going on with Mahindra last time out but hopefully they'll get it sorted this time out. Lurking in 3rd in the championship is Lucas Di Grassi which is pretty ominous to me. That Audi is only going to get better and they usually blitz the European season. Back in 5th in what we used to think was the fastest car is Antonio Felix Da Costa. I've given up trying to work out what the BMWs are going to do each weekend but their capacity to self destruct is only rivaled by that of Teechetah. Interestingly 4 of the top 5 were all there on day 1 of Formula E which maybe shows that experience counts for something in this series.

Who is the interloper in the top 5? It's 'dead man' Mortara in his second season driving the Venturi. What's remarkable about Mortara's season so far is that it has been entirely unremarkable. Don't get me wrong he has driven some good races but his results have all come from keeping his head whilst others around him lose there's. From 6th to 3rd on the last lap in Mexico. Then held off Di Grassi and inherited the win when Bird and Lotterer took themselves out in Hong Kong. Also credit must go to Suzie Wolff and Venturi who have really found something in that car over last few rounds. Someone else to watch out for is Oli Rowland who has started to show his potential in last few races and could have been on for a great result in Hong Kong of he had hit the pit limiter coming off that chicane whilst leading. He then proceeded, in his own words to "hit everyone and everything trying to make it back up" but there is no question a good result is coming. The same can be said of Pascal Whrelein who, in his 4 races, has been out on lap 1 twice and been in contention for the win before running out of energy twice. I think all of the above indicate how essential racecraft is in Formula E.

It's worth mentioning that over the last couple of months Formula E has gone from being a bit of a novelty to bring taken seriously as a form of competition. Andre Lotterer skipped a WEC race to do simulator work for Teechetah. Jani (who is already signed to drive for Porsche next year) has announced he will be quiting WEC to concentrate fully on Formula E. The BBC showed an E-Prix as part of its main programming for the first time and got a peak viewership of 325,000, which is not bad when you consider Moto GP only got 345,000. It's all building very nicely and that's mainly due to it entertaining racing. Which is why it's good to see the organisers sticking to their guns at the moment despite coming under pressure from the drivers and teams to change the format. The complaint being the race lengths being too short leading to flat out racing and less energy saving. It's a funny one seeing we've seen more people run out of energy than ever this year. I do hope Nissan aren't one of the teams complaining.

No news on the times and channels yet - mainly because I haven't checked - but remember it's back to Saturday this week!

(By the way I love writing the E-Prix threads but I don't want to monoplies them if someone else fancies writing some. Just give me a nudge if you do)

Staff Member
Premium Contributor
As Formula E now seems to have gained traction and looks like it is becoming a successful series I hope and pray that level heads remain in charge and it doesn't become all about the manufacturers.

Staff Member
Premium Contributor
Looking at the TV schedules, all I can see is coverage on the BBC Red Button and on Euro sport both starting at 06:30 on Saturday morning.

The BBC's Formula E coverage details page hasn't been updated since the 10th of March.

Contributor
To go alongside my statement on the changing attitudes to Formula E there have been various 'think pieces' appearing in Sunday supplements across the globe. This one from the Independent is worth a read:

My main take from that is a FE battery can charge an iPhone for 20 years! Probably means it'll charge my Huawei for about 20 hours.

fantastic write up RasputinLives but yeah looking forward to this every Eprix has been pretty great, you could make a case for the most entertaining open wheel motorsport series going. you cant really talk about favourites 11pts between top 6. & no disrespect to d'ambrosio or mortara but they dont look like championship contenders. but the ones you expect to be a threat 3rd 5th & 11th. so bit of topsy turvy championship & the current title odds show that

on the race, I think birds penalty was deserved because it comes down to 1 question would he have got pass if he had bumped him out of the way & its no because just wasnt enough of a gap. but strange this is 1st race in mainland china since 2015 bejing ePrix which circuit looked very basic in comparison to what we are used to now. also looking at the circuit layout, its very interesting, Im not presuming anything but i think the designer needs either a girlfriend or has been married too long. 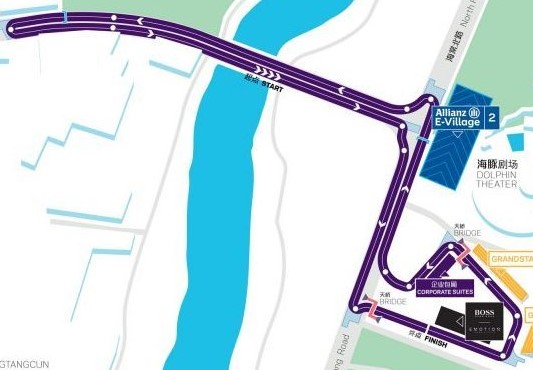 Contributor
I'm making a joke really. My P8 used to be pretty strong battery wise but as it's it's aged and my use of my bluetooth headphones have drained it.

As for timings - I can't do morning ones so will be getting it on catch up anyways. Have to admit the it's been great having it on iPlayer this year.

Contributor
Yes they are racing round a doodle of a penis this weekend.

F1Brits_90 said:
I thought Huawei were supposed to be good im guessing its just PR
Click to expand

I've just replaced my first Huawei phone after 2 1/2 years. I can't fault the operation of it but by the time I upgraded the battery life was down to about 5 minutes. I did upgrade to another Huawei though because pound for pound they are quality.

RasputinLives said:
Yes they are racing round a doodle of a penis this weekend.
Click to expand

You have a very strange shaped penis

Contributor
All the kids are doing it now days.

Staff Member
Premium Contributor
I don't know whether to go orange, laugh or cry regarding the previous few posts.

The thought of a Formula P(nis)

cider_and_toast said:
As Formula E now seems to have gained traction and looks like it is becoming a successful series I hope and pray that level heads remain in charge and it doesn't become all about the manufacturers.
Click to expand

Getting us back on track. I think where the manufacturers are concerned Formula E has a unique advantage. After the decree of a few governments, and the way the tech is developing, it looks like electric cars are the future. This means the big manufacturers need to develop the tech so they don't fall behind. As proven by last 5 years one of the best places to develop the tech is in Formula E. Therefore right now the manufacturers need Formula E. Formula E has 11 manufacturers as of next year so actually when it comes down to it they can afford to tell a pushy company to sod off because they will still have a series.

Hopefully those running the series realise this though.

RasputinLives said:
I'm making a joke really. My P8 used to be pretty strong battery wise but as it's it's aged and my use of my bluetooth headphones have drained it.
Click to expand

Battery life may be the least of your problems ...

Contributor
Olivier i've actually looked into this and I'm really not worried to be honest.

Staff Member
Premium Contributor
Yeah, I think the Chinese Intelligence services may enjoy a picture of my sons school project but I'm not worried about it.