Contributor
Thanks to the Bill Gates numbering system the next incarnation of windows will be number 10.

After Windows 8 failed to meet standards, a lot of people, including myself have stayed on or reverted back to Windows 7 which has generally been a very stable OS. If it's not broken, why fix it?

To combat the expected low sales uptake Microsoft have decided that Win 10 will be a free upgrade for people using 7,8 Phone & Xbox One but only in the 1st year it is released.

Since Win XP, the popularity of the OS has gone in cycles of good, bad, good, bad. Hopefully this version will make right everything that 8 got wrong but just looking at the interface it's not really convincing me yet.

I'm tempted to give it a go, mainly due to the price but as with any software these days the early months of any release are bug ridden and this free release is in effect just an open Beta test.

It does have some good gimmicks but what will make or break the software is everyday functionality.

Staff Member
I doubt I will be changing from Win 7 any time soon, mainly due to software I am using.

Also, I don't really see any reason to change - it's just an OS and it works.
I can't think of any other features I would require from an OS.

It also unveiled a headset that it said would one day project the operating system over views of the real world.
Click to expand

Wow, and old fashioned me has just been using my eyes to view the real world without the need for digital enhancement. Presumably Microsoft were so impressed with Google Glass they felt the need to make something similar we neither need nor want.

Contributor
"In addition, Mr Belfiore showed how the software could be used to respond to requests that had been typed, rather than spoken into a PC"

Now that is progress.

Valued Member
No doubt my old man will have it on one of the many computers that he owns, I shit you not, his "study" would shame a small university's IT department.

So I'll probably get to have a look at it then, I'll be sticking with Win 7 for the foreseeable future, tbh I only really use my PC as a media/home automation server these days anyway, I'm mainly using android........ Don't get me started on the Lollipop update (if you need any advice about rolling back to KitKat then I'm your man

Valued Member
Where do these companies get the names from? My Mac recently updated to "Yosemite". Really? Microsoft may not be able to count but at least there is some logic to the names of their OS's.

I want a holographic head set. Don't know why, I just do.

Contributor
Microsoft do have a serious problem with counting. Borrowing Greenlantern101's post from the Win 8 thread, 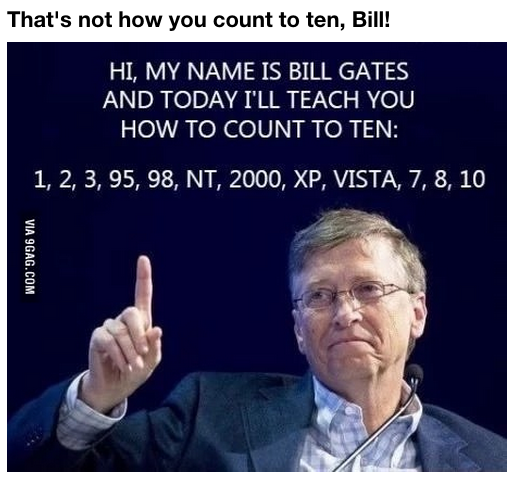 Then you have the Xbox numbering system.

Contributor
Out next month. Yay.
Comes with Cortana. Yay. And it's free. Double yay.

Staff Member
No good to me.

I use too many programs for which I don't have a Windows 10 equivalent.

I'll be sticking with Win 7 for a while yet.

Contributor
Beware, it sounds as though Micro$haft will get you to upgrade by a pretend update.
M

Contributor
Window 8 was shite windows 8.1 was even more shite, what's to say that windows 10 won't be completely shite..? 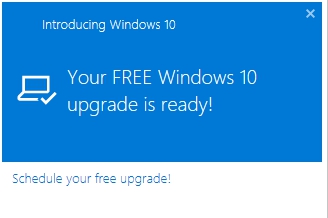 I'll wait for someone else to do it. I didn't entirely hate Windows 8 but I didn't upgrade my own PCs to it from Windows 7 as there was no real point.

That was flippin easy.

Contributor
Chrome dumped. Going to give Microsoft Edge a go. Internet Explorers replacement.
So nice having Cortana on the laptop as well as my phone.

I'm stunned at how easy the change over was and everything works fine! I'd spent bloody ages backing everything up yesterday just in case.

me too with the back up haha. Glad I'm not the only one that's paranoid.

Contributor
I am quickly forming the opinion that Microsoft Edge is even slower than Internet Explorer. Top job.