Staff Member
This should make FF1 easier this season Greenlantern101 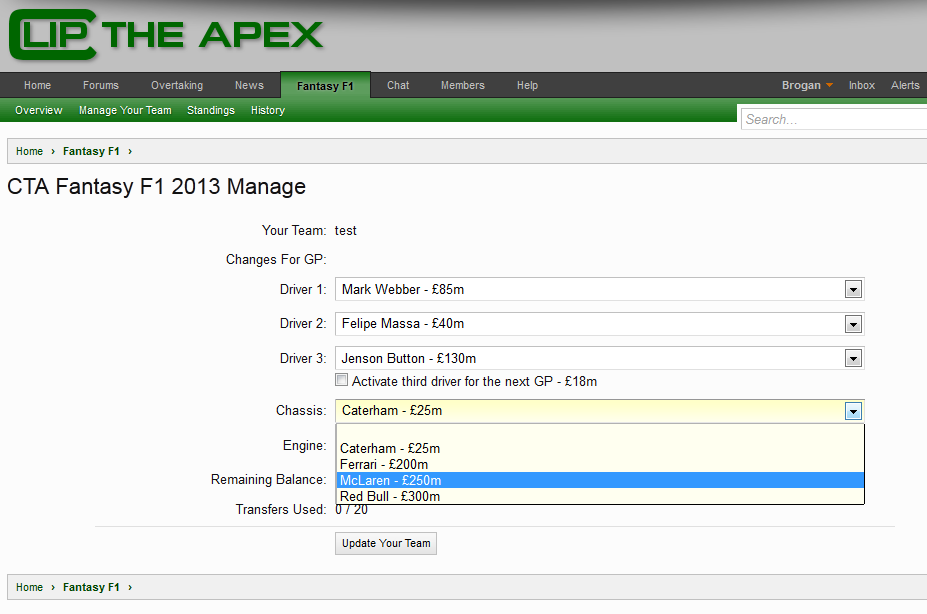 Contributor
That should make it easier for me at least I hardly did any transfers last year.

Mike has the basic framework in place but there's a lot of code still to write.
I'm busy adding the data so hopefully we'll have something a bit more polished within the next week or so.

It's looking good though and for those of you who have used the Overtaking Database, you'll know just what a great job Mike will also make of this.
M

Contributor
Yep he is a top bloke....

Contributor
Splendid. I might play this year after all.

Staff Member
I'm pleased to say that all of the data is complete from 2009 - 2013, which should in theory allow us to rebuild previous seasons and get rid of the pages (with a fair bit of manual hacking).
That's very low priority at the moment though as we only have a few weeks to finalise the code ready to open up the game for entries, which is typically near the end of February.

The core mechanics are done though so it's looking pretty good so far.

Contributor
Thanks Brogan and Mike

Staff Member
I hope this means you'll be entering this year Galahad...you have no excuses now

Staff Member
Still a way to go, but here are some pre-season teaser shots 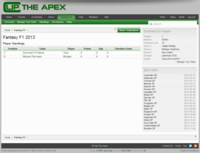 Valued Member
And I spy one of Administrator's friends has joined Clip the Apex, a shadowy being known only as CTA Fantasy F1.

I hope they don't decide to wreak destruction on this website for I think they are surely capable.
M

Contributor
Brogan those screen shots look fantastic now if you could just give me the name of the sneaky git who leaked my next seasons team name to you (Doomed To Failure.) and then ban him for life that would be appreciated, thank you....

Valued Member
Mephistopheles - Looks to me like it was Test.
M

Contributor
He won't even let me view his profile

Will the new software be able to accomodate obscure Led Zeppelin-created symbols for my team name?

Staff Member
It should be able to soccerman17 as the tables and software all support UTF8.

Try posting it here and see if it shows correctly.

Valued Member
Team-Mate Prediction will be back too, with a slightly upgraded spreadsheet and two slight rule variations. Just need teams to announce drivers...