So both Championships are now decided. Lewis Hamilton and Mercedes Benz are setting new standards by which F1 teams and drivers will be measured in the coming years. Despite this, the calendar is not yet complete and we move on to that bastion of freedom and equality, Bahrain. This race was postponed from March and should have followed Australia, but like so many things COVID intervened. Now we will have a double header on the Sakhir circuit as rounds 15 and 16 are scheduled to take place on consecutive weekends. However, unlike the other double headers this year we have two different circuit layouts to look forward to.

As with previous races in Bahrain the track action will start at twilight and run in to the night around a floodlit track. Pirelli are supplying the C2, C3 and C4 tyre compounds. I suspect they may find some more grip from these at this circuit than they did in Turkey. But wait, what's this? There is rain forecast Saturday practice and qualifying! Yes, seriously - Gulf Air Bahrain Grand Prix | Realtime Weather & Forecasts

There have been occasions when having won the title Lewis Hamilton has backed off. In 2015 Nico Rosberg won the last three races of the season, with Lewis having taken the title, and used this as a springboard to win the title himself in 2016. Lewis Hamilton 2020 is, however, a different person. His teammate is nowhere near the same standard as Rosberg, and Hamilton's focus is at a different level compared to the 2015 version.

Some happy facts to help you enjoy the event. If you live in Bahrain you can go to prison for sending out a tweet criticising the race. The families of those who oppose the regime in exile are often imprisoned and tortured. Despite 70% of the population being Shiite Muslim nearly all senior positions in Government and the military are held by Sunni Muslims. Bahrain is 142 out of 180 in the global press freedom ranking with journalist who oppose the regime often jailed and tortured. Put simply, if you are a male Sunni Muslim living in Bahrain it's a great place to live. For anyone else, it's a bit shit.

This marked the first time a British Royal Naval Base had been opened overseas, other than small administrative sites, since before World War 2.

This marked the first time a British Royal Naval Base had been opened overseas, other than small administrative sites, since before World War 2.
Click to expand

Staff Member
Premium Contributor
Under those stars is it the word "pizzas" by any chance?

Contributor
Does paedophiles get through the spellchecker?

gethinceri said:
Does paedophiles get through the spellchecker?
Click to expand

now then now then

Staff Member
They sent a letter no less.

Oooh, I bet it was strongly worded. 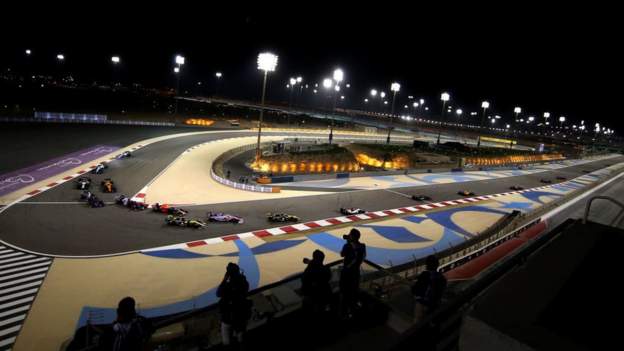 A cross-party group of 30 UK parliamentarians calls on Formula 1 to "leverage Bahrain into respecting human rights".

Brogan said:
They sent a letter no less.

Oooh, I bet it was strongly worded.

A cross-party group of 30 UK parliamentarians calls on Formula 1 to "leverage Bahrain into respecting human rights".

These MPs are a bunch of twits. If they really wanted it to stop they should pass a sanctions bill banning any UK entity from doing business with Bahrain and Saudi Arabia.

Valued Member
But then we wouldn't have a "defence" industry...

Back to the race, how much does Lewis want to break the final threads holding Bottas' spirit together? Another pummelling this weekend and you wonder how he can keep going.

yes he can beat bottas before next season. if we have 3 Portuguese GPs where he dominant on race season. unless bottas 4.0

Valued Member
I like Jonathan Wheatley. The man knows his stuff about heave dampers.

just to add to the madness of 2020, the F2 practise session had to be delayed because of rain.

yes it was raining in the desert

intresesting in FP1, verstappen's issues in turkey werent known until they broke the car down in the garage that when they went from wets to inters reason for the lack of pace is person who in charge of electronic devise for "turns" of wings. had put +2 on 1 side & -2 on the other

i said before how much i want albon next season. but listening to 5 live at work & i thought palmer was spot on. red bull are hoping he gives them a reason to hire him & hes giving them a reason to fire him

Contributor
Alex Albon is wasting a seat in F1 now.

I think Albon needs to finish in the top 4 each race to stand a chance. However their management of drivers is creating problems for them so really they dont have any sympathy

Contributor
When they’ve gone through so many drivers in recent times, if they then get rid of Albon who can they replace him with.
J

FP2 - ruff session, paws-ed because of dog on track.

I know, I know - people have been banned for less