So both Championships are now decided. Lewis Hamilton and Mercedes Benz are setting new standards by which F1 teams and drivers will be measured in the coming years. Despite this, the calendar is not yet complete and we move on to that bastion of freedom and equality, Bahrain. This race was postponed from March and should have followed Australia, but like so many things COVID intervened. Now we will have a double header on the Sakhir circuit as rounds 15 and 16 are scheduled to take place on consecutive weekends. However, unlike the other double headers this year we have two different circuit layouts to look forward to.

As with previous races in Bahrain the track action will start at twilight and run in to the night around a floodlit track. Pirelli are supplying the C2, C3 and C4 tyre compounds. I suspect they may find some more grip from these at this circuit than they did in Turkey. But wait, what's this? There is rain forecast Saturday practice and qualifying! Yes, seriously - Gulf Air Bahrain Grand Prix | Realtime Weather & Forecasts

There have been occasions when having won the title Lewis Hamilton has backed off. In 2015 Nico Rosberg won the last three races of the season, with Lewis having taken the title, and used this as a springboard to win the title himself in 2016. Lewis Hamilton 2020 is, however, a different person. His teammate is nowhere near the same standard as Rosberg, and Hamilton's focus is at a different level compared to the 2015 version.

Some happy facts to help you enjoy the event. If you live in Bahrain you can go to prison for sending out a tweet criticising the race. The families of those who oppose the regime in exile are often imprisoned and tortured. Despite 70% of the population being Shiite Muslim nearly all senior positions in Government and the military are held by Sunni Muslims. Bahrain is 142 out of 180 in the global press freedom ranking with journalist who oppose the regime often jailed and tortured. Put simply, if you are a male Sunni Muslim living in Bahrain it's a great place to live. For anyone else, it's a bit shit.

Why did they need a full safety car at the end? Surely that should have been covered with a VSC

Johnny Carwash - I think that that boat may have already sailed... Perez or Hulkenberg will Get that seat...

Contributor
The survival cell of the Haas did its job today. 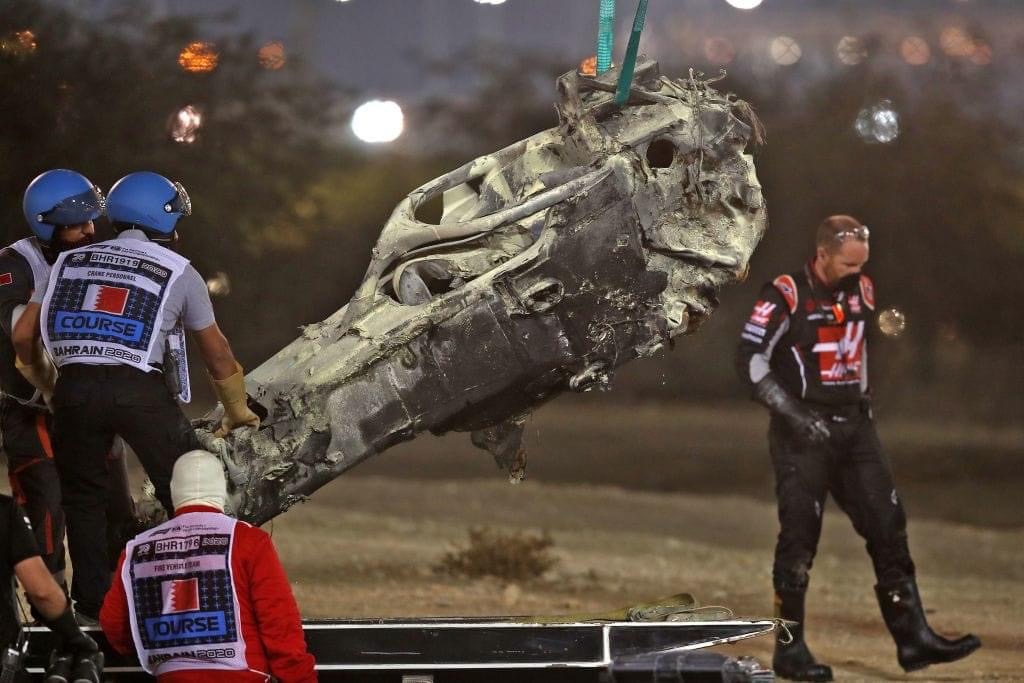 that was possibly the most terrifying crash ive seen. not seen a crash as bad that in a very long time. especially with car splitting in half which must be a severe concern to Haas team. it was like a throwback to Niki Lauda era & im not surprised most in the paddock where shook up because i was at home. its no understatement to say its a miracle he's alive & i seriously feared the Worse. congratulations to the entire safety team because i had a huge sigh of relief

but now on to the tough part because i dont want to speak ill of him. because he had a traumatic experience & with his burns + suspected broken rib. likely won't be back until his farewell in abu dhabi. & i feel awful for saying this, this looked like it was Grosjean Fault & it have been coming because i vaguely remember Riccardo was furious with him in Silverstone for then dangerous driving & im sure i remember he was involved with a few incidents in 2019. why was Grosjean not lifting off the throttle if he closing on magnussen a bit quick. to do such a severe turn on the opening lap was mad because it shows no spatial awareness.

Spatial awareness has been the back story throughout his F1 career.

Contributor
I hated that race. He’s got the driving skills of a mummy in a 4x4 but that was pretty sickening. And gutted for Perez and the RP team (excluding Stroll senior). What a shit race.

Valued Member
Some excitement at the start, amazing that some burnt cotton and glue is stronger than a steel armco. Very glad Grosjean wasn't seriously injured. The rest of the race was just pants. I genuinely fell asleep for 30 laps.

Premium Contributor
So where is the circus going for the next race ?

Contributor
Staying Bahrain.
Grosjean's driving straight from his own playbook. What a very lucky man.

Titch said:
So where is the circus going for the next race ?
Click to expand

same again but on the outer circuit. thoughts of 53 second laps, potentially fastest average speed pole lap & 87 laps i think will be most laps. since 90 laps of 1972 Spanish GP

that crash is 1 of those going to take time to get over. that its still effecting me now of what couldve been. i heard he was in the flames for 18 seconds

Contributor
I’ll prefer never to see the same again, but I’ll be intrigued to find the cause.

The guy is lucky to be alive - he survived a massive impact and total disintegration, went through a metal barrier, then was in a fireball.

The ****ing trifecta of crashes.

François Cevert was killed in an armco failure there were a few in those days resulting in death, many more died as a result of fire and crashes, however the chances of both happening simultaneously and walking away are very rare, considering the amount of time he spent in the flames of that intensity it shows that each individual advance in safety despite criticisms were worth it.
One must consider that probably the latest, the Halo was the final safety measure that ensured he walked away ugly though it is, what I did find strange was that armco was exposed where head on collisions were possible, I.e no tyre barrier, but with Grosjean's accident the possibility of the tyres enclosing the car would possibly be a greater risk. He was just lucky and unlucky, unlucky to crash in that area where two things shouldn't have happened, fire and armco failure, lucky that the multiple safety systems worked in an accident where multiple failures occurred.

It struck me overnight just how lucky Grosjean was. Because the car punched through the Armco, it Was perfectly possible that Grosjean could have been stuck in the car (with Armco above the cockpit opening).

I was mightily relieved seeing that he was out of the car - had he been trapped in the car, I fear that the outcome would have been much, much worse.

After the accident, I did ask myself why there was an Armco there - the accident itself was a freak accident, as it would take significant combination of outcomes for a car ever to end up at that barrier.

This is the second incident like this I’ve seen this year - the first was at Russia in the F2 race - the crash into the TecPro barriers was very similar! (Ghiotto’s accident in the sprint race - and the cause was similar)

Jack Aitken and Luca Ghiotto suffer a big crash at Turn 3 in the Sochi F2 sprint race, with both drivers fortunately escaping unscathed as the race was red-flagged.

heres the replacement, i believe the 3rd fittipaldi to race in F1 i hope he's more Emerson than Christian

Contributor
When the grandson of Emerson Fittipaldi is racing this weekend, I bet it makes quite a few people feel old.

Contributor
I’d rather chalk a cue than crash into an Armco barrier. I think Ronnie o Sullivan saying you could drive an F1 car with one finger looks,even more ridiculous now than when he said it last week. 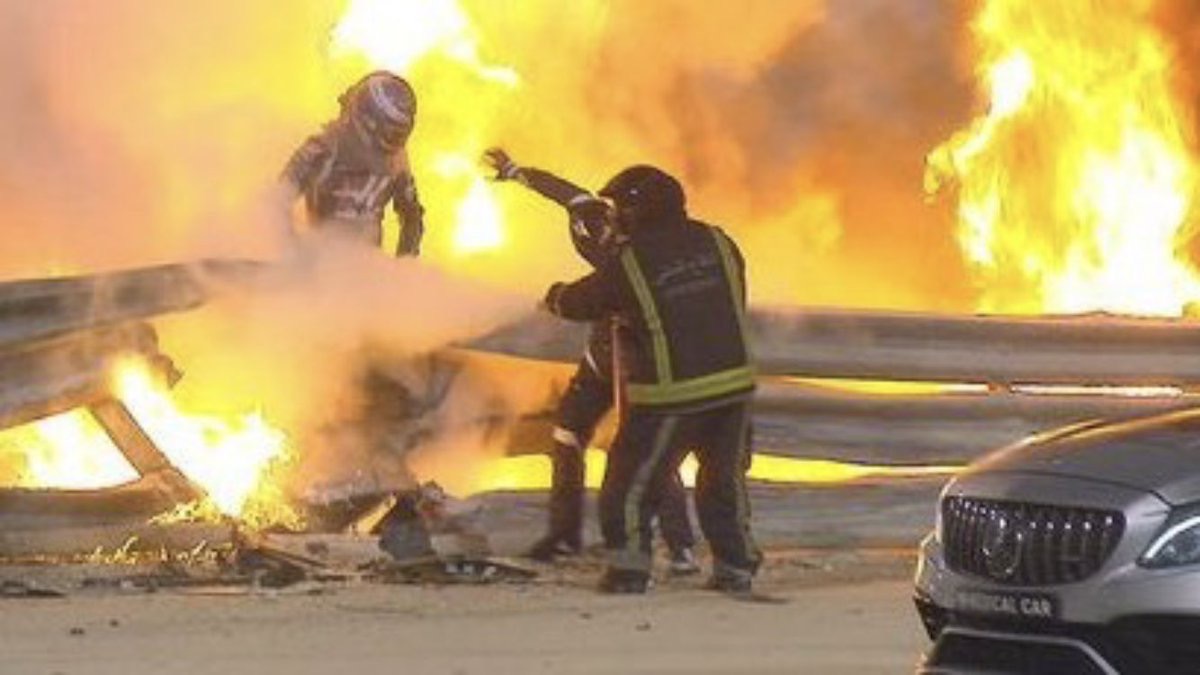