1st of apologies completely forgot to upload it yesterday. got doing other thing & other concerns it flew out of my head

after a last few races recently not classics but decent. & where Mercedes have made a very good case to be considered the most dominant F1 team in series history. no team has won both titles 6 in a row, not Fangio, Prost/Senna McLaren, Schumacher Ferrari or Vettel Red Bull. which is even more impressive as theyve done it over 2 different rule changes. which has brought many a dominant team to an also-ran. but i feel its a perfect storm alot like Ferrari in early 2000's who for me were more dominant than Ferrari over the 6 constructors , the best driver in the most efficient team

but anyway enough of the events of post Japanese gp & its place in history next time out it will be the final Mexican gp, because next year under the new deal it will become the Mexico city gp & become only the 2nd grand prix named after city rather than a country after abu dhabi. but im delighted about the new deal because I think mexico even so early on would have been a big loss to calendar. because it is a fantastic vibrant city with all the day of the dead festival. Fans love the racing shown by the great atmosphere given by that stadium section & only a support matched by tifosi & british. because you dont need a commentator to tell you if perez has overtaken anyone because the huge crowd roar let people know. the circuit has a bit of everything you've got the 1.2km front straight & long straight between 3 & 4. then flowing section between 7 & 11 then into the stadium section. also the altitude throws a unique factor into it, as mexico at 2,300m is higher than other 20 combined, Altitude has been a issue for Mercedes & very good place for red bull because even in 2016 they only got pole by a few tenths compared to 7 tenths over the season. also since the rule change no Mercedes has been on front row, only bottas in 2017 has been on the podium & Bottas even got lapped last year which is unthinkable for "dominant" Mercedes, which barring reliability the championship will highly likely will carry on til USA

Circuit outside of F1 does have Rich History of Motorsport up there & beating some of the historic circuits from around the world there is rarely global or North American series that hasn't raced here at some point, you have old sportscar series & New WEC, Formula 3.5, Champ Car/CART, NASCAR, Porsche Supercup, A1 GP, Rolex sports car series (US WEC), Formula E & Race of Champions. the stadium section the Foro Sol has played host to some big names in music Madonna, Paul McCartney, Rolling Stones, David Bowie, Coldplay, The Killers, U2, Iron Maiden & Lady Gaga

Circuit is Honoured after the Brothers Ricardo who died in 1962 & later Pedro Rodríguez who was also killed on the track in 1971, 2 very talented drivers who were taken too soon, Ricardo who was the Max Verstappen of the late 50's early 60's, at just 16yrs & 4 months was due to take part in le mans 24 hrs but organisers judged him to too young so was replaced by jose behra brother of teammate jean behra to race alongside pedro, but after allowed to compete but retiring in 59, he would finish 2nd in 1960 at just age of 18. still youngest ever to stand on the podium at le mans, held the record for youngest driver to start a race for 48 years, until Jaime Alguarsari came in for Bourdais mid season. was youngest for 55 yrs to start from the front row until Verstappen Belgium 2016. he is still the youngest F1 driver ever to race for Ferrari at just 19, a year before his tragic death which all start Ferrari opted not to enter the non-Championship Mexican GP so signed to drive Lotus 24, but during the 1st day of practice, approaching the peratalta the Lotus's rear right suspension failed & he hit barrier dying instantly

Pedro who was considered the best driver of his era in the wet, won 2 F1 Races, his 2nd & final F1 victory was in the final Belgian GP on the old circuit in 1970 in a race where only 6 took the chequered flag, but only managed the best of 6th in the championship so it was sportscars where Pedro was more successful came 3rd in 1967 24hrs of daytona, then despite having a terrible reliablity record where he retired from 12 of 14 le mans he entered, he won the 1968 le mans 24 hours in the GT40 & also won the 1970 & 1971 24 hours of Daytona which was to be his final success. because Pedro Rodríguez at age of 31 was driving for the lead was killed in an sports car race at Norisring on July 1971. as a slower car edged him into the wall & upon impact it burst into flames.

but to end it on cheerier note & not the tragic death of 2 very successful drivers. enjoy the race & hope everyone has a good weekend 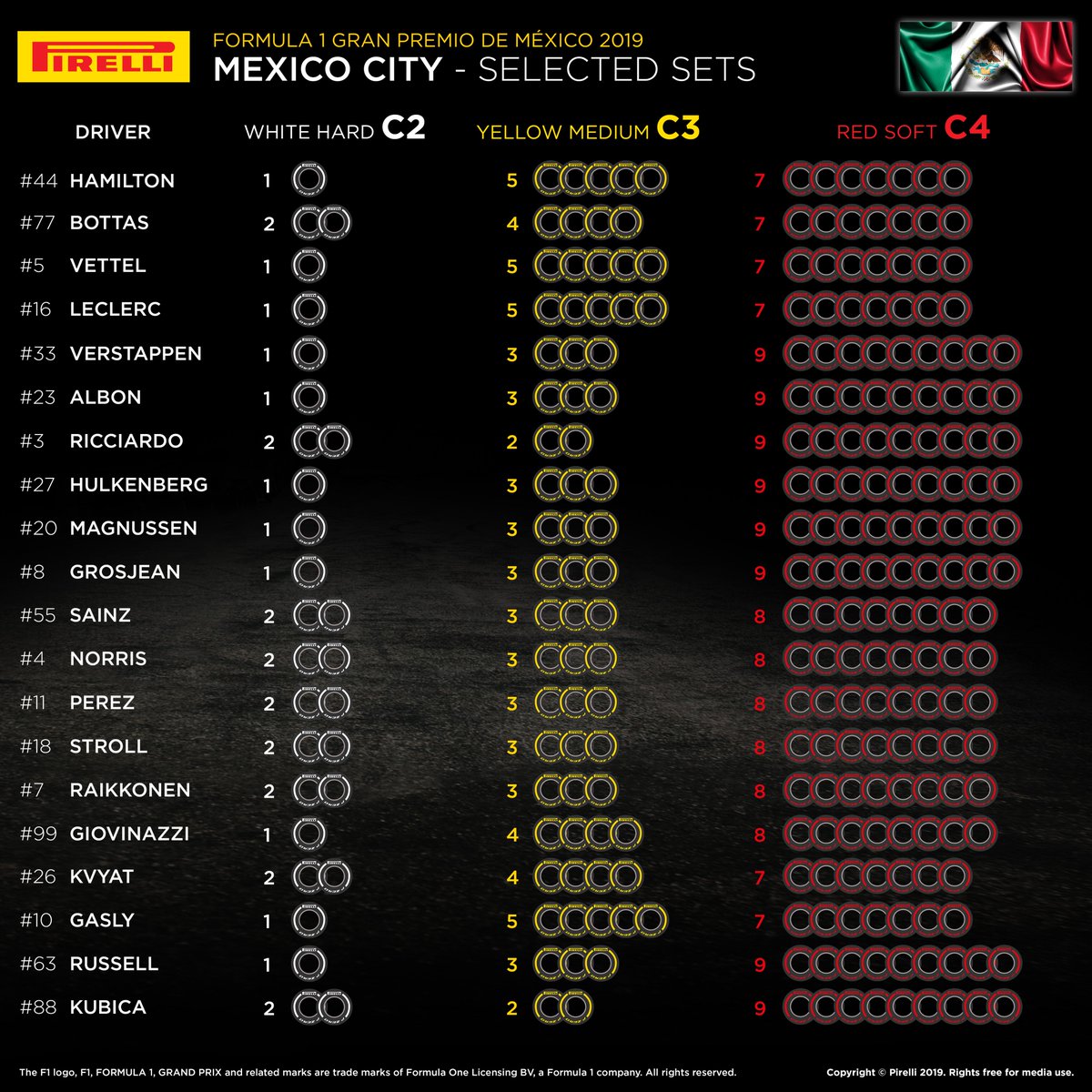 Contributor
So if Lewis wins how far down does Bottas need to finish for Lewis to be champion?

Contributor
I've worked it out, If lewis wins but not fastest lap. Bottas needs to be 5th or worse this weekend for lewis to be crowned champion. Otherwise it will go to the next race.

Contributor
If Lewis wins AND gets fastest lap, Bottas needs 3rd as if he was 4th the points would be a draw. But Lewis would still be champion as he would have 10 wins to Bottas 7.

Greenlantern101 for me Lewis would need a DNF for Bottas. to win it in mexico. because as posted above since new cars 2017 Lewis qualified 3rd twice. finishing 9th & 4th. he finished 1min 17 last year & bottas lapped. then in only altitude race this year. austria they were nowhere. so 3rd is possible but it realistically wouldnt be enough

Contributor
I mean purely mathematically, it's been over for a whilst.

Greenlantern101 said:
I mean purely mathematically, it's been over for a whilst.
Click to expand

Staff Member
Never rule anything out.

Schumacher broke his leg in 1999 which took him out for 7 races.

If Hamilton DNFed or DNSed the remainder of the season, Bottas could take the WDC with 3 3rds and a 2nd.

Contributor
Will need need something like that for Bottas to win the Championship as Lewis Hamilton has only had 7 non finishes in the Turbo Hybrid era.
Last edited: 18 October 2019

Contributor
Omg I love championship maths. I'm so excited. Off for a lie down

Brogan said:
Never rule anything out.

Schumacher broke his leg in 1999 which took him out for 7 races.

If Hamilton DNFed or DNSed the remainder of the season, Bottas could take the WDC with 3 3rds and a 2nd.
Click to expand

i agree that anything can happen & Lewis from his maiden season knows this when kimi was 19pts behind with 20pts remaining. but realistically its going to be tough because arent talking about a ferrari team that had errors in them

Lewis has 3 DNFs in 75 races 2 was engine failure & the other rosberg gave Lewis no room & forced him off. only Austria 2018 was last DNF in previous 63 & only twice in over a decade has Lewis seen the chequered flag but not been in points germany 2009 & spain 2013. we are talking about ridiculous consistency in the same 75 races Lewis has taken 26 poles 33 wins & 49 podiums (including 26 of last 30). if Lewis to lose is going to need some of worse prolonged reliability any F1 driver has ever suffered
Last edited: 19 October 2019

14 points difference in the next race over teammate and Hamilton wins the championship early.
I wouldn't like that.
Let still, though symbolic but the intrigue in the championship remain.
But Hamilton could improve his statistics in next seasons.

nice overhead picture of the circuit 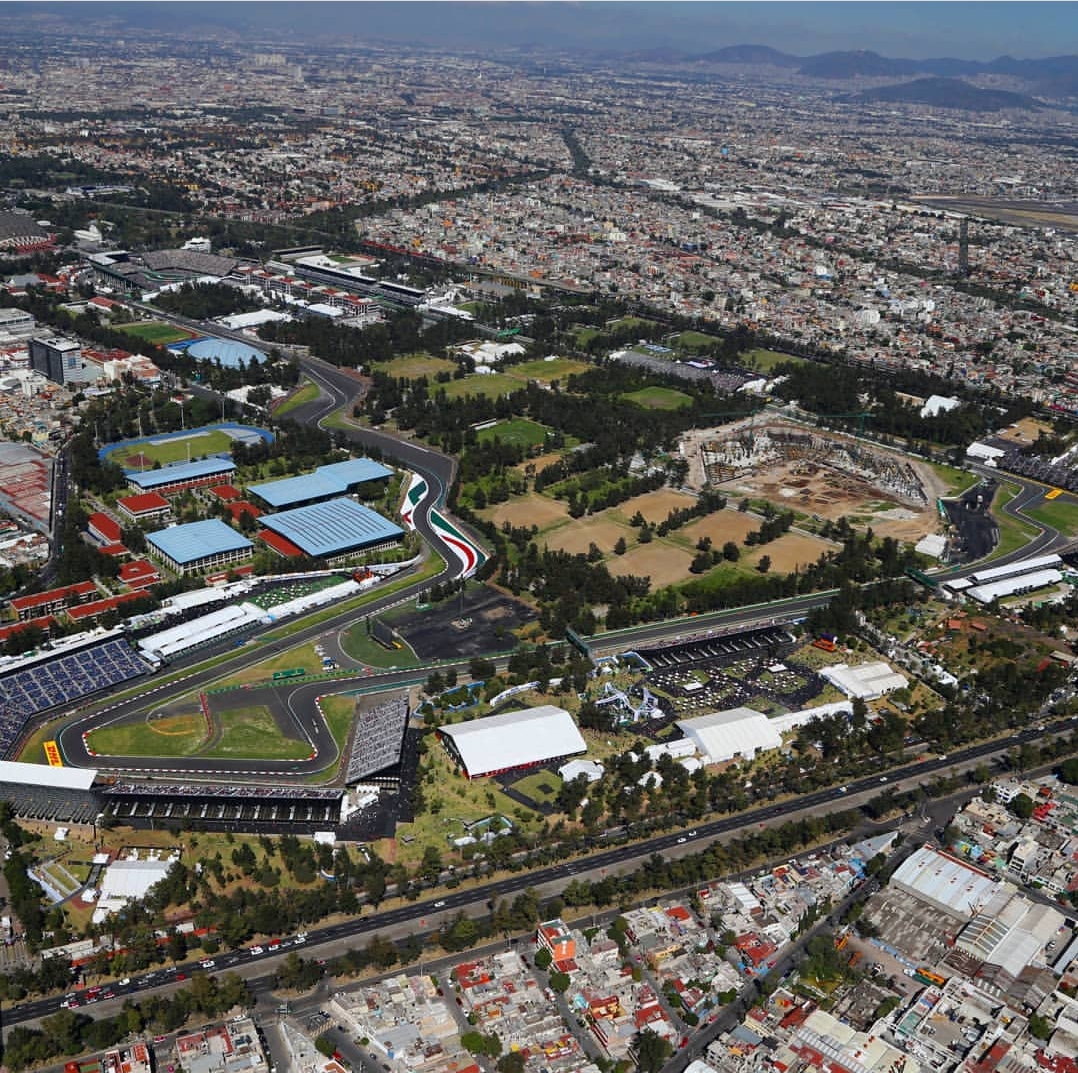 This may be my least favourite race on the circuit apart from, maybe, Abu Dhabi. It just does nothing for me. The crowd seem keen though which is good.

Valued Member
I'm with you rufus_mcdufus, hyped beyond belief and an emasculated circuit because of health and safety concerns. But look how fast they go down the straight...

Contributor
Late one for the Ch4 people. 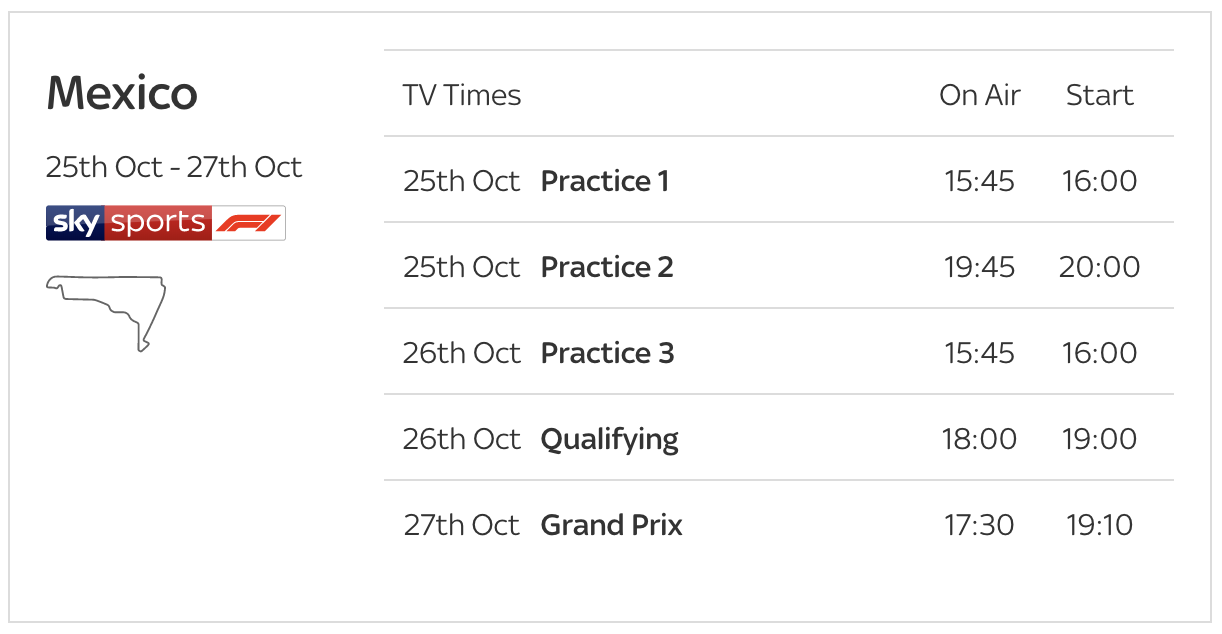 Valued Member
Is Mexico the only circuit where the cars go round the back of a grandstand?

Contributor
Yes, Greenlantern101 I'll record the race and watch it Monday. It's either that or fall asleep and not watch half of it.

Valued Member
Fast forward to the end Angel and save yourself the agony of nearly two hours of tedium.