Poll Should Button now take a supporting role to Hamilton

Contributor
With only 9 rounds remaining and Alonso 88 points ahead of Jenson, he would need to gain 10 points per race on Alonso. With Jenson averaging 9th place this year it is unrealistic to say he still has a chance.

Hamilton is 47 points behind Alonso, so only needs just over 5 points more than Alonso per race.

Is it time Jenson plays the team game and assists Hamilton when possible even if that means swapping places or altering strategy to hold up opponents ? 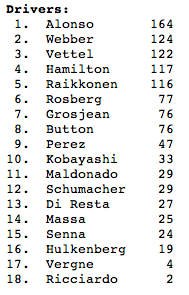 Jenson already developing into a Massa-type supporting role; turns up, but doesn't do much to get in the way.

Saying that, and the way this season has been, Spa will probably be a Button/Massa front row and 1-2 finish.

No he shouldn't, but McLaren need to maximise both drivers results rather than making dodgy strategy calls that do not work.

First thought for McLaren should be the constructors. If Jenson wants to help Lewis out, then fair enough, but do not think he should get forced to, the same as I don't think any driver should get forced to help their team-mate (Massa, Webber, etc..) as this is just the waste of a seat a better driver could be using.

Oh, and I would like to know your thoughts if the points were the other way around.

Contributor
RickD if the points were the other way around I would expect Hamilton to support Button.

Valued Member
I believe a McLaren contract states that a driver drives for the team. Button has next to no chance of winning the title, Hamilton has a possibility. Button should support Hamilton.

Staff Member
Should the team implement this? Possibly.
Will they? I doubt it.
If they did, would Button play along? Unlikely.

Valued Member
If it can make a difference without sacrificing constructors points they should. I would add though, that I am not sure on the long terms benefits of forcing a driver to do the bidding of the team, so serious coaxing would be required.

Look at how focusing on one driver has worked out for Ferrari when it comes to the constructors.

Contributor
If we turned the tables on the other foot, would Lewis help Jenson out if he was the one more closer to Alonso with 9 races to go? Somehow i don't think so!

Mclaren let their boys race, common sense for any pilot to do as much as he can for the team,if and when Lewis's chances are there JB will step up

Contributor
I agree with WheelKnutt, I think Button is a decent and practical bloke and will support Hamilton when he thinks there's no chance for himself, it depends on when he feels that point is though.

Contributor
He'll race for the title as long as the maths allow it. It was ever thus and should always be, unless teams are employing drivers who don't want to win. I wouldn't employ one, would you?

Valued Member
I just saw this after I posted on the JB thread...

I voted no... HE shouldn't take a supporting role to LH... but I think Ron, Martin and Sam have different idea's...

gethinceri said:
He'll race for the title as long as the maths allow it. It was ever thus and should always be, unless teams are employing drivers who don't want to win. I wouldn't employ one, would you?
Click to expand

I'd employ drivers who do what is best for the team. Which is winning when they can, but when the teammate has a much more realistic chance for the WDC, they support their mate.
And if I was teammanager from McLaren, I'd be employing teamorders from now on, if it is approriate during the race.
Which means that Button can go as fast as he likes, but if Hamilton is in the place behind him, they would switch places.

Contributor
Even if Button did take a support role for Hamilton it would only work if Button was able to finish ahead of Hamiltons main rivals and take points of them which he hasn't really done recently apart from at Germany.

Contributor
Hmm it depends on the specifc situation really. For example if Button is not directly racing Hamilton (as in Silverstone) he should move aside to let Hamilton past. However if both are fighting for the same position I think that it should be fair game for both, unless Button's championship is mathematically over. I would expect the same of Hamilton if the situations were reversed of course, just like how Hamilton played a pivotal role in Button's P2 in Germany. Overall I voted yes.

Massa for example could still mathematically win it...

Who is the fastest driver? Attempting a 'Speed Index'
2

Poll Was Hamilton right to not yield to Rosberg?
8 9

Poll Should Grosjean now take a supporting role to Raikkonen?
2 3

Second Half of the Season - Championship Battles