Second Half of the Season - Championship Battles

Valued Member
Focusing on the Drivers' Champion is, of course, what they'll all do when looking back on the 2014 season, as in any season. They're the people who will forever have their names up in lights, their commemorative T-shirts printed and the trophy in their hands. But, as in any F1 race, there'll be battles running right through the field right up to Double Dhabi...

BATTLE FOR 1st: NICO ROSBERG 202, LEWIS HAMILTON 191
So Lewis Hamilton is apparently in one corner fighting the world of ill fortune, poor strategy and his team-mate's inexhaustible cunning while Rosberg is given the easy task of just winning Grands Prix. It is not that simple, but it is the case that this is a two horse race. One suspects Hamilton has the resources to win this, but not necessarily that he will.

BATTLE FOR 3rd: DANIEL RICCIARDO 131, FERNANDO ALONSO 115
That Alonso is in 4th in the Championship underlines the fact that he is a superb Grand Prix driver. If we're honest, anyone in that Ferrari should offer no challenge to a Red Bull pilot such as Ricciardo, but I'm not stupid enough to rule Fernando Alonso out of getting the Other Cars Champions' bronze medal.

BATTLE FOR 5th: VALTERI BOTTAS 95, SEBASTIAN VETTEL 88
I'm not ruling out either catching Alonso, actually, but this could be extremely interesting. Essentially, it is a battle between a young up-and-comer with a whole lot of top speed and a four time World Champion who is almost as quick going around corners as in a straight line. You would suspect Bottas will have pushed this lead out by the Asian rounds, but there Winfinger may well be dangerous.

BATTLE FOR 7th: NICO HULKENBURG 69, JENSON BUTTON 60
That Button and Hulkenburg are so close to Vettel is testament to their excellence over the course of the season, which has somewhat gone un-noticed. In fact, Ron Dennis needs a careful cranial examination if he feels Button has been the problem this year. The Hulk has been his usual consistent self, while JB has scored big when given a rare opportunity. Force generally need to take a big lead after Monza, because that's where they typically fade.

BATTLE FOR 9th: FELIPE MASSA 40, KEVIN MAGNUSSEN 37, SERGIO PEREZ 29, KIMI RAIKKONEN 27
This group is really the "machinery to do better" category, if one is being harsh on Magnussen. The other three need to really get their fingers out if they're to maintain their perception as competent Grand Prix drivers. Admittedly, the work of the latter three to limit their losses by crashing into Massa has been ludicrously effective, but Massa needs to get himself out of the line of fire more often. Massa should win this by miles, in truth.

BATTLE FOR 13th: JEAN ERIC VERGNE 11, ROMAIN GROSJEAN 8, DANIIL KVYAT 6
It is a blow to the reputation that Kvyat has built up this year that he is somehow on less points than Romain Grosjean, who is driving a cardboard box with wheels. He's also worryingly close to Vergne, but it is difficult to imagine Lotus scoring too many points from now to the end of the season without a big improvement. Kvyat really needs to beat both if Red Bull are going to sit up and take notice.

BATTLE FOR 16th: JULES BIANCHI 2, PASTOR MALDONADO 0, MAX CHILTON 0, SAUBERS & CATERHAMS 0
Bianchi's two points from Monaco still stand. The humiliation for Sauber and Maldonado to be beaten by Bianchi could be too great to bear, and frankly should be. I hope Maldonado still cares enough about racing to be ashamed. Look out for attrition, because none of this lot have been too close to the points otherwise. Although, in general, lots of attrition means Saubers in the wall/pit garage/both.

Contributor
Kimi fighting for 9th . He's better than that, if only he could get his brain into something like the same place as the car, he might be able to do something about it. He's dissapointing.

Staff Member
Premium Contributor
Vettel will surely win a race this year in the second half of the season. I just can't see him not doing it.

The 4 way battle between Bottas, Alonso, Ricciardo and Vettel is really interesting. I've got a sneaking feeling that it could end up with the RBR's third and fourth leaving Alonso fifth and Bottas sixth.

At the sharp end, I reckon Hamilton will do enough. I'm pretty sure, with the Mercs the way they are, the faster driver will come out on top in the final reckoning.

Murray weighs and tips who will be champion

Staff Member
Premium Contributor
Let me guess, before even reading it. Erm Hamilton ?

Staff Member
Premium Contributor
Wow, I take it all back. 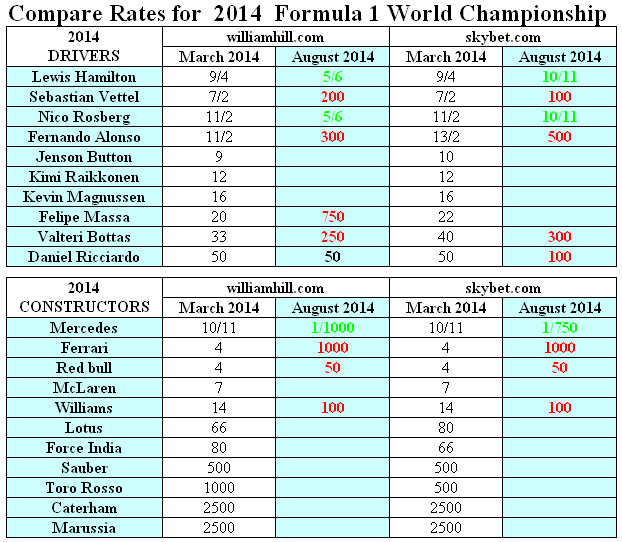 Blank cells - bids will not be accepted

It is clear that the emptiness worse redness

And about championship before summer vacation 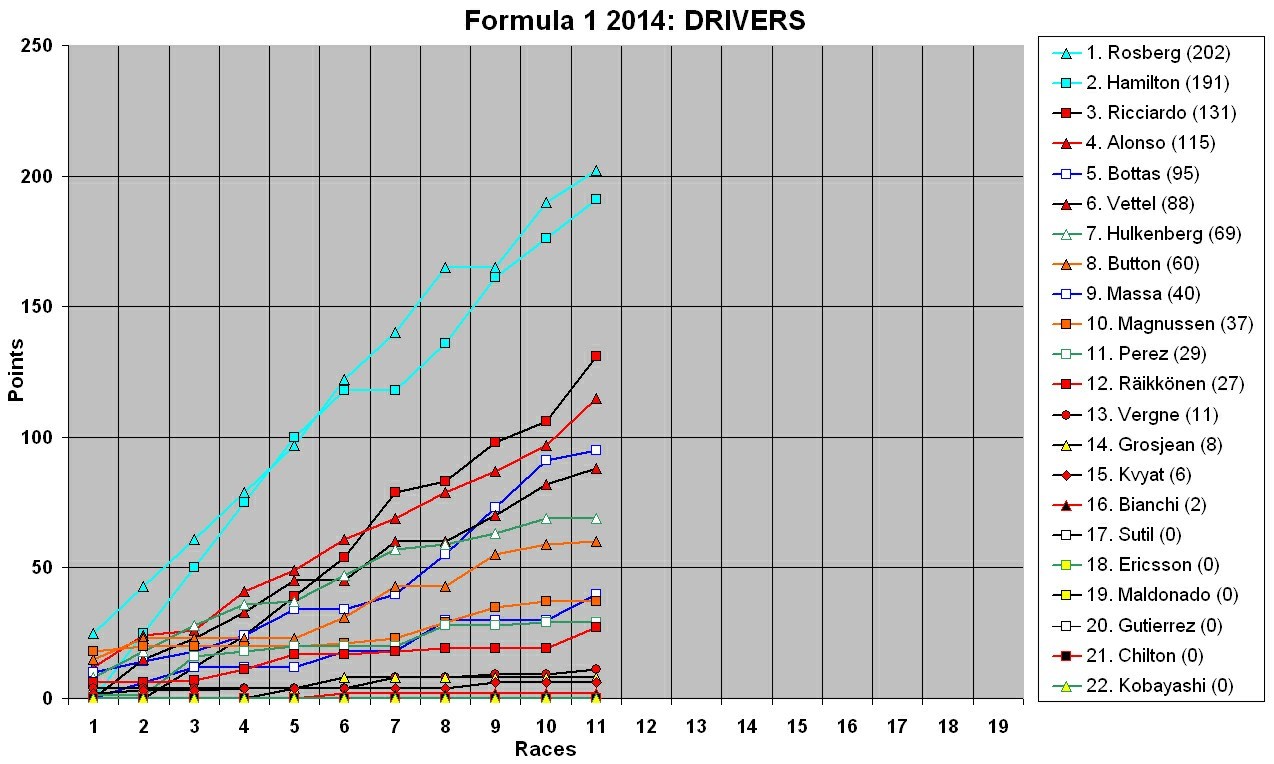 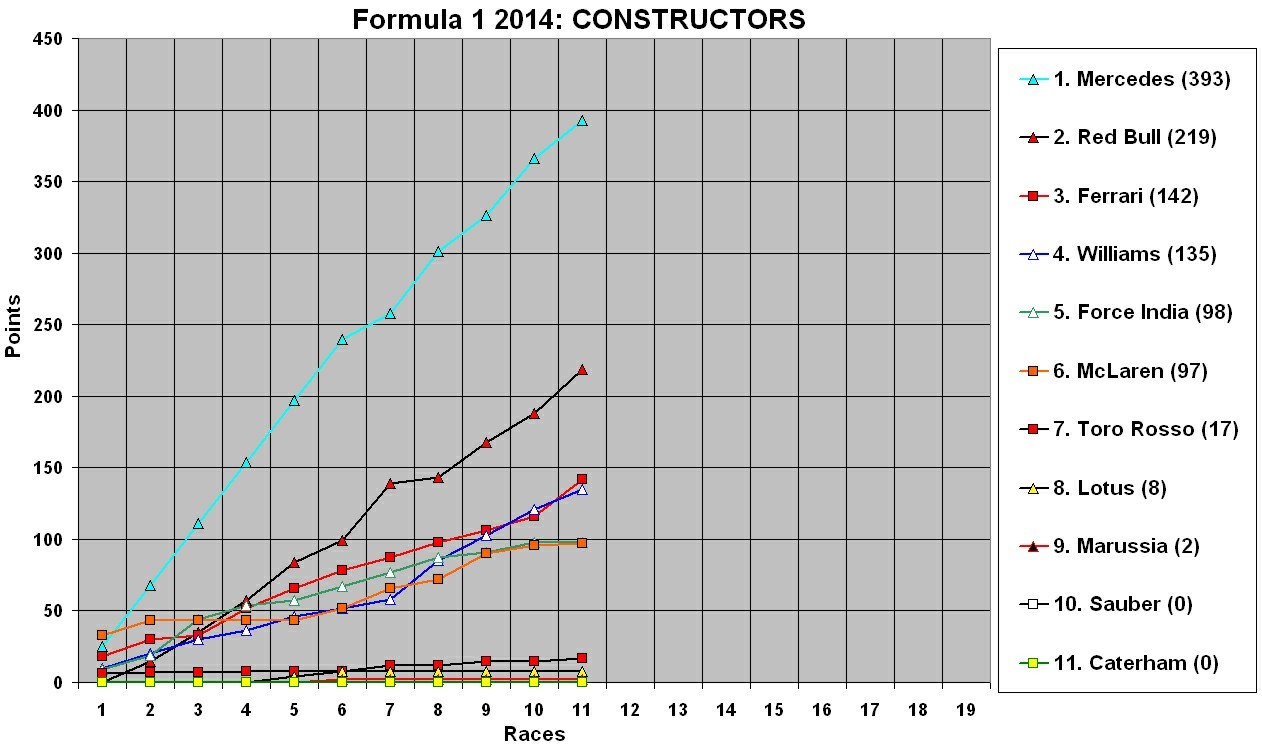 There is 3 duels at least: