Contributor
I 100% back JEV to beat Da Costa over a season. Da Costa has never been able to be consistent over the course of a season in any series he's been in and JEV is on super form.

stumbled upon this earlier. tough to research as this was only thing on Google about it. no trailers or formula e page about it & nothing on youtube. interesting program its about how saudis organised the eprix from circuit design, construction & all security stuff. if you have eurosport be interesting to watch

Find out when Formula E: Race to Change is on TV. Episode guide, trailer, review, preview, cast list and where to stream it on demand, on catch up and download.

Contributor
So just read this article

New Formula E CEO Jamie Reigle says the electric championship could reintroduce pitstops along with a potential fast-charging focus for its Gen3 car – an idea he calls “the big one”.

Which is really interesting and talks about the push in the Gen 3 car to show rapid recharge is possible. They state Gen 1 showed e vehicles can be racers, Gen 2 that battery life had longevity so rapid recharge is the next logical step.

Also interesting to me (I'd missed it) is Jamie Reigle slipping into the Agag vacancy he left when he went to be chairman as the CEO. Reigle has spent decades with Man Utd and some time with the LA Rams and knows how to market a sport or team.

but it sounds good & fits the brand of formula e

also weird time to start a championship. but it will start on Friday morning, which I had to double check was correct on 22nd

Contributor
Why is it hidden on the red button. Are they ashamed of it?
Stick it on BBC2

Marrakesh & Rome will be on bbc 2, I would assume that London will be as well even if they have no plans. I wonder if the red button is because of the 1000hrs of sport they are aiming for

formula e starts tomorrow morning 11.30am i believe in saudi Arabia for the double header. is Jean Eric Vergne a stick on for 3rd straight title after his outstanding form in final 3 or 4 of last season. or could his teammate da Costa previous champions buemi & di grassi, perennial bridesmaid sam Bird. or Mitch Evans. i think the 2 newcomers will be back like usual new teams do 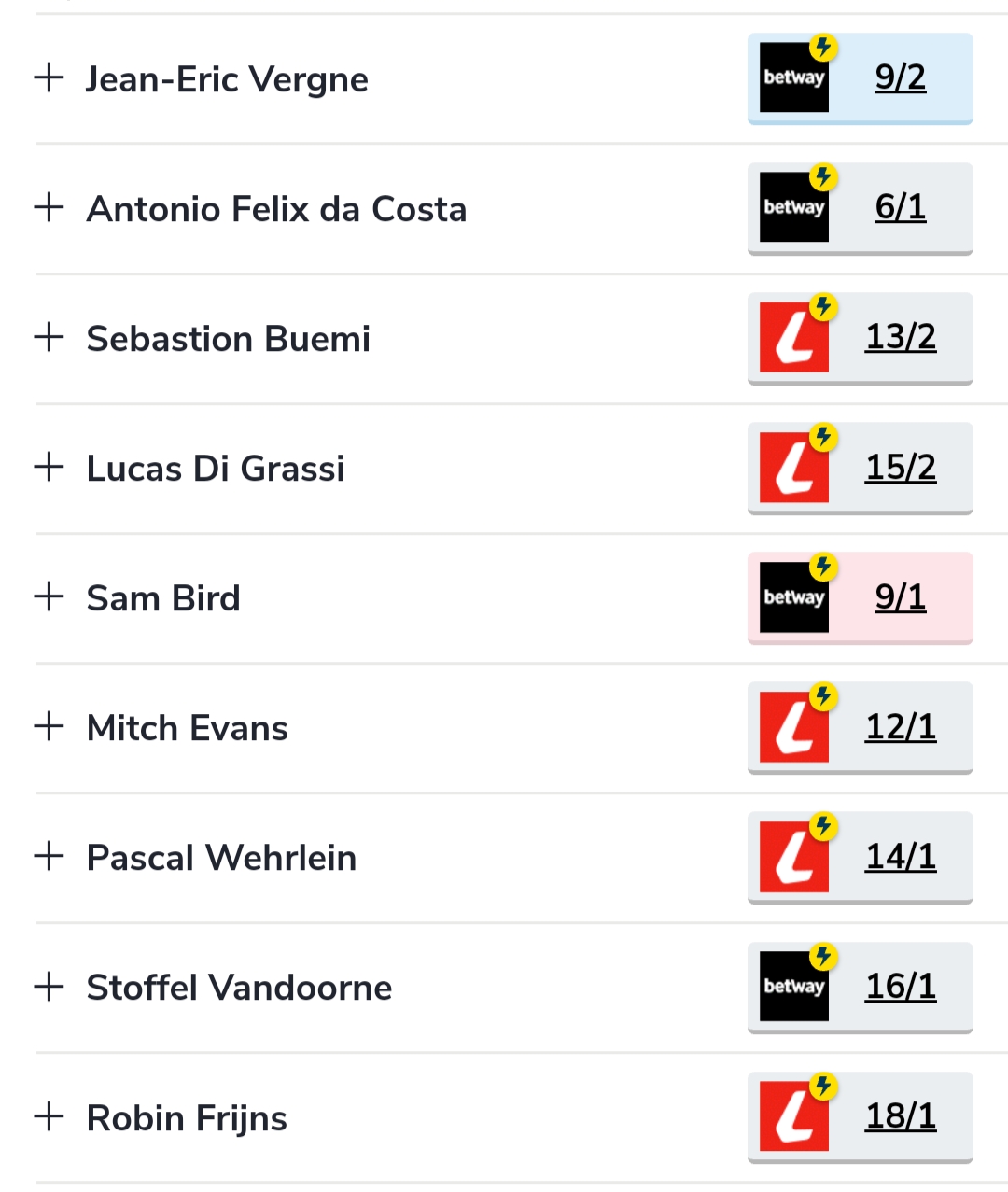 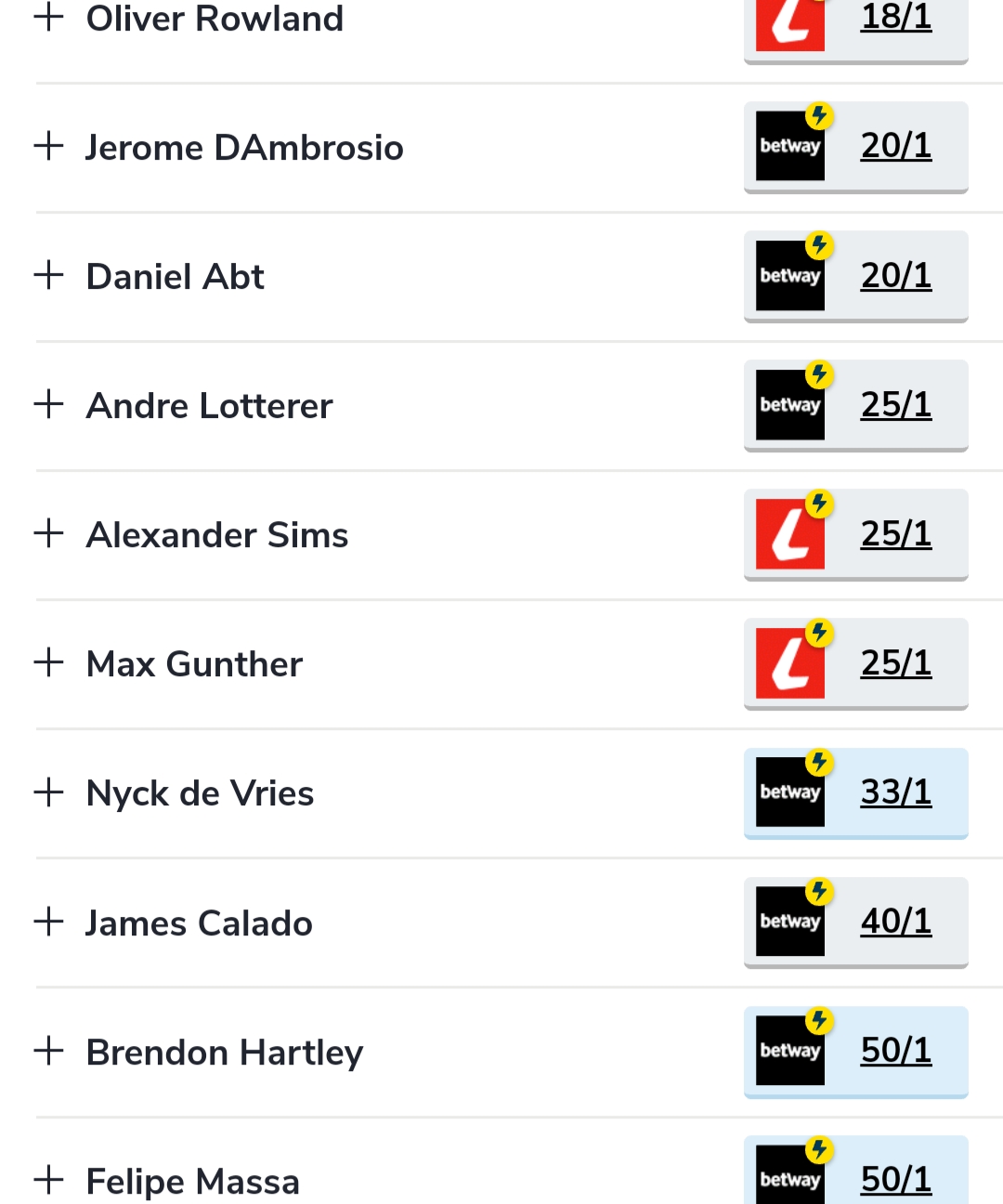 Contributor
There was spmething on tjhe Red Button this morning about Formula E and qualifying. I decide to watch it later but haven't got round to it yet.

i thought it was decent race & cracking drive by the winner

I am still very confused by formula e. The scheduling, and the publicity just baffle me

yes 12pm today, if you can find it go on the tv guide on your tv, go to channel 980 on sky or 601 on freeview. or keep checking this website

Follow the 2019-20 Formula E season across the BBC with full race calendar, results and TV and online coverage times.

ive no idea why they started on Friday morning, its baffled me & mates in "real" world when we were disscuing Formula e because why would you start a big series on Friday morning is extremely weird. its an amateur thing to do

2 races will be on main BBC, but I think the reason why bbc is because of their 1000 hours of sport objective, they been putting a lot of stuff on there. like FA cup qualifying rounds

The BBC plans to broadcast 1,000 extra hours of live sport a year online as it attempts to "reinvent free-to-air sports broadcasting".

Fanboost is the same reason for driver of the day in F1 they love having audience participation but now we have attack mode. its less relevant but yes you will see the same people get it I think abt got it at every race last season, its mainly the people with the biggest social media presence

F1Brits_90 - thanks - I forgot my biggest complaint - finding information about Formula E on the BBC website! The fact that they have a direct link to Formula 1, but you have to go into "All sport", then "Motorsport" to find FE - surely the default should just be to Motorsport. After all, there isn't a different link for each different division of kick-the-ball...

Valued Member
Two cracking races, if you haven't seen them just search for Forumla E on the iPlayer

Contributor
By cracking do you mean "lots of penalties"?

Yhe first race was reasonable but why have an attack mode which makes drivers lose time, why do the drivers have to use it and why have such gimmicks anyway; it's at least as bad as DRS.

Does anyone know how many spectators there were? I saw very few until after the race finished.

Yes, there are always things happening and some good racing but it is just too gimicky to take it really for mr (and that includes qualifying which seems to be set up to punish good performances).

Bill Boddy said:
includes qualifying which seems to be set up to punish good performances
Click to expand...

Contributor
Bill Boddy attack mode is there to add the tactical element without pitstops - much in the way that you have to do at least one pitstop in most other formulas. I disagree with you on it being at least as bad as DRS because you can use it to attack and defend and is not a certain overtake. It plays out much better at other tracks than it does at the stupid round at Saudi Arabia where they shouldn't be racing at anyway - especially on a Friday and especially 2 months before the rest of the season takes place. I do get why the Boomer generation struggle with it a little bit because it is different but the racing is always good and is always unpredictable.

Despite not liking the timing or the location I did enjoy the racing. Race 1 especially was a fun Formula E race. Race 2 was a little bit too chaotic. There is a lot of quality in the field this year driver wise and car wise. Was all up for having a pop at BMW's driver line up for being low on talent but then they get a 1-2.

Sam Bird is Formula E's answer to Stirling Moss. Audi once again promise a lot and deliver very little. Merc's test season last year has worked well for them. Pleased for Lotterer that Porsche aren't as far off as I thought they would be. Jag? Need results or cider_and_toast's prediction of a team withdrawal last year might come true.

Looking forward to the season starting proper in Jan.

Amazed they didn't announce the end last year. Electric cars are very much central to JLRs plans however it must have been a tough sell as the workforce was being laid off to justify the team. Mitch Evans winning certainly helped.

They seem to have spent all of their seasons in FE to date having to come back from being initially way off the pace.

Contributor
I think the IPace trophy has a lot to do with them staying in too. Interesting to see it get some very brief air time in the build up show.

Speaking of TV coverage the 'driver eye view cam' used on the second day was pretty cool. I'm sure FOM will have nicked that by next season.

cider_and_toast said:
Amazed they didn't announce the end last year. Electric cars are very much central to JLRs plans however it must have been a tough sell as the workforce was being laid off to justify the team. Mitch Evans winning certainly helped.

They seem to have spent all of their seasons in FE to date having to come back from being initially way off the pace.
Click to expand...