The man widely regarded as "the most complete driver on the grid" has proved he is no one hit wonder. Last year, he almost won the championship in the 3rd fastest car - and throughout the season he gave Massa a schooling.

Senna's teammate Berger is best placed to tell us who, if anyone, is as good/better than Senna - and he said that Fernando Alonso is "as good as Ayrton Senna". Since Senna is the g.o.a.t, this would mean that Fernando (as of October 2010) was the greatest of all time (along with Senna).

Now that Fernando has yet again schooled the field with his complete driving (see lap times today), it is fair to say that he is the greatest of all time.

Staff Member
He didn't do too well in 2007 did he, against a rookie?
M

Staff Member
Massa and Hamilton were in different teams so you can't make a comparison.

Besides, last time I checked, Hamilton was the 2008 WDC, not Massa.
Difficult to therefore claim Massa outdrove him.

As much as it galls you, when Hamilton and Alonso were in the same team, the rookie won.

Accept it and move on.

Your attempts to disrupt this forum with your bile won't work so give it up now.

Valued Member
Wasn't hard, "Fernando is faster than you"

The men who stare at goats.

Contributor
Perhaps he meant this sort of goat:

Sure, Ferrari finished 3rd in the Constructor's Championship, but the F10 was not the 3rd fastest car.

The McLaren was slightly behind the pace of the Ferrari in the first half of 2010 (slightly faster at Turkey and Canada), but the Ferrari was undoubtedly quicker in the 2nd half of the season.

If Fernando didn't bin it at Fuji 2007 and Spa 2010 all on his own, he'd have two more titles and then you might be able to say he was the G.O.A.T. As it stands though, I think it's debatable that he's even the best CURRENT driver.

Contributor
With a title of Alonso = Goat i was looking forward to a good reasoned comparison of the two, like for example that his feet are hoof like which gives the spring in his step, or that his mindset is that of a billy goat - temperamental at best..

I could tare every word of your pointless glory ramble to shreds, but like most, i realise there is no point to shred.

Contributor
Just read the other thread, I'm obviously too late to the party

I couldn't find a picture of Fernando Alonso and a goat, so here's a picture of David Hasslehoff with some puppies instead. 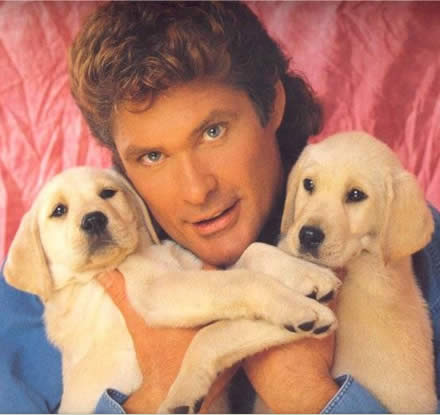 Staff Member
As you've seen OP, your attempts to disrupt this site have failed and will continue to fail.

If you have any useful input then by all means stick around and try engaging in some serious, reasoned debate.

Not just ugly but seriously fugly
2