Here we go you lucky ducks. Our good friend Olivier signed up for this one, but since he's not around you're stuck with me doing it instead, sorry

As we head into Asia and the race at the Marina Bay Street Circuit of Singapore the balance of power looks to have shifted slightly in the 2019 season. We started off the year with the domination of Ferrari in testing and then when the racing started we were back to square one. Mercedes were on the front foot and off up the road like a robbers dog winning every race going it seemed. Bottas, complete with his new beard, even showed some fight against his team mate and took a couple of wins in Australia and Azerbaijan, he was the only one who managed to deny his team mate in the first eight races as we all sat back and expected total domination by the German team and Hamilton, it seemed likely.

Then we went to Austria and something happened. Now Austria is always a track where Mercedes as a whole and Hamilton in particular has struggled more than at other circuits from what I can tell, Hamilton did again this year it would seem. The young Dutch driver Max Verstappen managed to stun us all and pull a win out of the bag, followed home by both Ferrari's and Bottas ahead of Hamilton. Since then out the last five races Hamilton has only won two, his dominance seemingly less than it was. Whether he's so far ahead in the championship he's not as driven to win, or if it's something else, who knows? Red Bull and Ferrari seem to have suddenly found a way to beat him, at least Verstappen and Leclerc have, let's not mention their team mates just now for various other reasons.

Singapore is another track like Monaco where the walls are incredibly close, the turns tight and twisty and where pretty much anything can and often does happen. We rarely see a race there without at least one safety car, often there is more than one due to the nature of the track and lack of run off areas etc. not to mention the narrow and cramped pit lane. It's a bumpy circuit, and although the race is run in the evening when it should be cooler, note the should, the temperature inside the cockpit can get up to 60C (140F). The humidity is also incredibly high making it even harder on the body, along with being one of the longer races which can trouble the two hour limit. So it's not for the feint hearted. You need to be on your game both mentally and physically to win in Singapore.

Of the eleven times it's been raced since we returned there in 2008, Nico Rosberg has won it once, Fernando Alonsohas won (ahem) it twice and both Sebastian Vettel and Lewis Hamilton have four wins under their belts. The way things are going you have to wonder if either of them will win it again this year. Vettel likes this track but in his current form I have to wonder if he can up his game enough to take his first win of the season on such a demanding track, especialy when his younger team mate Charles Leclerc is showing such brilliant form and could potentially make it three wins a row. Then again will Max Verstappen put in another sterling performance to take his first win here and third win of the year as well? Will Hamilton find that extra something that seems to have been missing in some of the recent races and grab another win here, his fifth here and his ninth of 2019? Under the artificial lights and in the heat and atmosphere of Singapore you can bet whoever wins it will be physically drained by the end of it all. Probably we will too if the race is anything like as demanding as it had been sometimes.

Last year your pole sitter was Hamilton and your podium was 1st Hamilton, 2nd Verstappen 3rd Vettel. On a side note, Kevin Magnussen managed to grab the fastest lap there which just proves how unpredictable this place can be.

Turn on your fans, sit back and let's hope we all enjoy Singapore 2019!
Click to expand

Staff Member
Premium Contributor
I can't believe it's been going for 11 years.

I also can't make my mind up if it's a good track or not and if I would miss it if it went. Its always been a GP that seems to take place with very little fanfare. It comes round in the calendar, it happens, the calendar moves on.

Contributor
With this track being more suited to cars with good high downforce packages,I would imagine that either Red Bull or Mercedes are most likely to have the best chance of winning this race.

I'd say that this is Verstappen's race

Contributor
I will point out that Ferrari have done well here in previous years and although Hamilton has won four times, he's seemed to struggle at other times in my view.

I'd say it could be Verstappen's race, Publius Cornelius Scipio but I also wouldn't rule out Charles Leclerc either. I'd like to think we'd get an epic battle between the two of them as well.

i couldnt choose because it obviously suits red bull always has, ferrari im not historically yes but they were alright in monaco but clearly 3rd best in Hungary & car suits high speed circuits. mercedes were great in both winning both. weather is always a factor long-range forecastis that it will rain in morning on Sunday

so i am struggling on my youbet.

Premium Contributor
Do they still have storm drains beside the roads in Singapore? If they do, I don’t suppose they run next to the designated F1 track, I’ve never seen an F1 car putting two wheels over the line and sliding gently into a six foot hole , so I guess I’ve answered my own question.

cider_and_toast said:
I can't believe it's been going for 11 years.

I also can't make my mind up if it's a good track or not and if I would miss it if it went. Its always been a GP that seems to take place with very little fanfare. It comes round in the calendar, it happens, the calendar moves on.
Click to expand

i like it i think the mix of it being a night race the mental challenge of walls, it being 2 hours long. its been the now big physical challenge now Malaysia has left. i would get rid of spain france & Russia before. but the fact that it is in the run in every race gets overlooked for the main prize

but yes it is older than i thought by Sunday it will be 25th longest hosted F1 championship race in history out of 42 different places that have. overtake indy 500
Last edited: 13 September 2019

Contributor
I can't remember seeing storm drains in Singapore Titch unlike KL and other cities in Malaysia.

They were definitely there in the 60's

The Ferrari's will struggle because there is only the back straight where they can use their engine power. Their cars seems to have trouble with slow and medium speed corners judging by Hungary where they ended up a minute behind Hamilton and Verstappen and there is a lot of that in Singapore

Contributor
Okay, I'm going to admit it, this race is so dark I often look at it and get the idea it is run indoors. Yes, I know, it couldn't possibly be, but I sort of get the feeling it could be.

yeah I think it is an excuse because bernie wanted a night race found some one willing, not complaining because I think its been a success & a great spectacle although ive seen a few gp2 races in the day at Singapore, it looked abit crap. & night makes it look better for some reason.

but they needed an excuse use European time but it does suit the world because its 9am qualy / 8.10am in new York, 1pm/2pm Europe 8pm/10pm Australia & they couldn't really do it in Europe because of time great for America, but dreadful for asia as it would start between 1am - 4am

Contributor
Singapore is held in the city with high rise buildings which add to the spectacle.

Plus Singaporeans have lots of money if you believe in Crazy Rich Asians .

We've yet to see a wet race in Singapore but they keep when it rains it pours. Would it make it too dangerous to race? 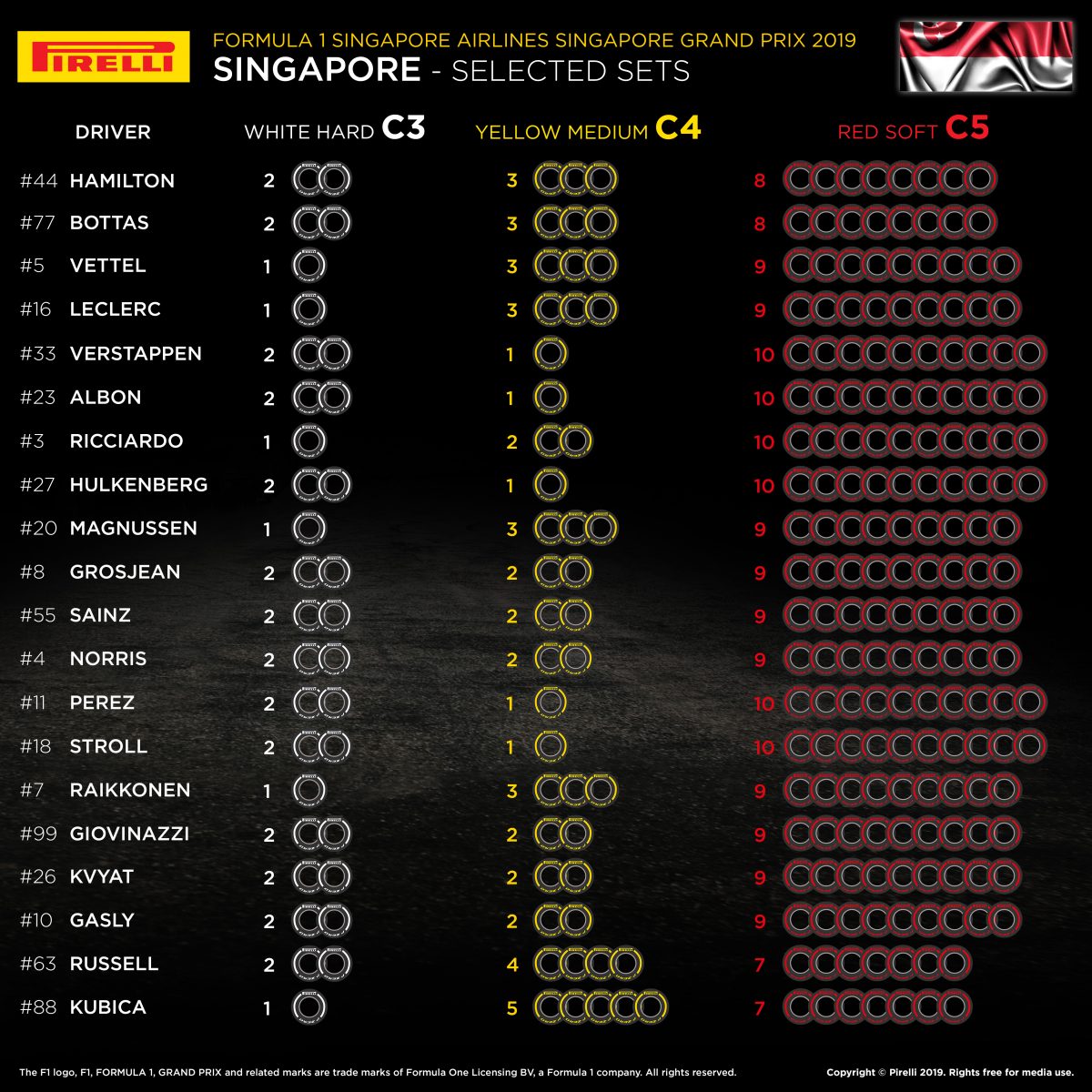 Il_leone said:
We've yet to see a wet race in Singapore but they keep when it rains it pours. Would it make it too dangerous to race?
Click to expand

Based on how it's rained in other Asian races, specifically Sepang, it probably would make it too dangerous to race, especially given the nature of the circuit.