So F1 moves on to its Shanghai noon, or Shanghai ten past noon under the new regulations, for its annual trip to China. The Clip The Apex board is still reeling from a Bahrain Grand Prix it actual enjoyed and Mercedes are still reeling from the second Ferrari victory in a row. Whilst there is a good deal of punditry suggesting these results mean Ferrari have now caught up with Merc I tend to disagree. Both races feel like Mercedes have ballsed up rather than Ferrari have solidly beaten them. The Merc has never liked the heat so Bahrain was always going to see them off form (as will Singapore later this year). China though is very much a Mercedes track. It was a Mercedes track before they were the dominant force in F1. If they don't win here then they are in serious trouble.

The problem Merc have is the opposition they are facing. He really has his detractors (some on this board) but Sebastian Vettel is a force to be reckoned with. Hamilton may be the greatest when it comes to pace and overtaking but Vettel has, and always has been, the master of defensive driving and adapting to change in situation. His ability to have to suddenly switch strategy and make those tyres last in Bahrain shouldn't be underestimated. Neither should his positioning and use of battery boost to make sure Bottas couldn't get close enough to jump him. All of this means that any micro mistake Merc make is really exploited. Hamilton is brilliant, he really is, but seemed very lost in Bahrain when Ferrari did something unexpected and his radio stopped functioning, basically turning his radio man into Red Leader from Star Wars (stay on target!). Its an area both he and Merc need to work on.

The only thing longer than the straight at the Chinese Grand Prix were the faces at Red Bull after last Sunday. Mechanical error aside you have to raise an eyebrow at Verstappens erratic start to the season. 3 crashes in 2 races, all driver error, is not what we'd expect from a talent now in his 4th F1 season. I believe the speed is there but he really needs to calm down and realise you can't win a race unless you're in it. I sound like a broken record but he continually reminds me of Jean Alesi. Danny Ric will just be hoping for a functioning car and a clean run so he can really see how the Red Bull matches up to the big two.

I love Martin Brundle as a pundit but, due to his connections with the companies that own Mclaren, I really can't trust his take on the team and its situation. Its a bit like listening to Alan Shearer talk about Newcastle United. Brundle was saying they are third in the constructors championship and Alonso is 4th in the drivers so its all good. It really ignores a lot of elephants in the room. For starters Mclaren were still not the leading Renault powered car at the end of the Bahrain Grand Prix despite two of them being out the race and one of them struggling with a battery pack throughout. This is not good for a team who prides themselves on their chassis. The other is of course the sudden form of Torro Rosso Honda. There was a lot of questions as to why Alonso switched from a one stop to a two in Bahrain when staying out would have bumped him up to 4th. Well it wasn't shown on TV but when Alonso dived into the pits Gasly had just got into DRS Zone and was about to streak past him. I honestly believe they pitted him to avoid the embarrassment of Honda going past them.

The likelihood of a repeat performance by Torro Rosso by the way is low. It was great to see them up there but on the big engine powered circuits I'd be very surprised if Honda can compete. It is great to see them making progress though. Speaking of progress, how about a minutes applause for the much maligned Marcus Ericsson and his great drive to points in Bahrain? Followed by a verse of for he's a jolly good fellow for Kevin Magnusen for finally looking like he is achieving his potential and beating up on his high rated team mate? Once we've done all that we can go look for the real Carlos Saint as I believe he is being held in a dungeon somewhere. He certainly hasn't been at the Grand Prix this year.

OK guys. Second part of a double header! Go to the second sub menu on your steering wheel, move the cursor down to that blank space and press OK to engage party mode! Then remember to deny that party mode exists. Either ways have at it.
Last edited: 9 April 2018
Click to expand

Staff Member
Premium Contributor
After my glowing write up on Max in pre-season about how I felt he had shook off the inconsistency that plagued him last season, how he would go on to outshine Danny this season and force Danny to move on.....

I'd just like to say as usual, I'm wrong.

I watched the race late last night and didn't spot the potential Honda overtaking the McLaren, sounds like you could be right about the pit stop.

Young Max needs a damn good drive in China that's for sure. Bless him he's only a kid, it takes a while for patience to sink in, it's only natural for him to mess up a bit and endanger others at the same time, and he's a nice young lad so let's give him a bit more rope. I'm only half-joking and admittedly biased towards him – the start in China will be exciting.

do we still give max Verstappen abit of leeway, being young & aggressive he going have up & down where he's learning because he has been fast tracked hasn't gone through GP3 or GP2, he's doing all his development In F1. good fact that if Verstappen takes his 1st pole position, despite a possible 81gps expierence still be the F1's youngsest pole sitter & good win a F1 title as late as 2020 still beat vettels youngest world championship

but then i feel like with come end of 2018 some mid 2018, he will have started more grand prixs than Kubica, Clark, G Villenueve & Moss. so he should be less error prone now

Contributor
How about we compare his number of races rather than his age? Out of the top drivers what were there stats like they reached sixty odd races like Max? And what was there temperament like?

Hamilton certainly had a title under his belt by 60 races. I might be wrong but I think Vettel did too. Vettel was the crash kid for a while though and Hamilton's driving used to make Massa call safety meetings every week.

Interesting topic for a thread elsewhere I reckon if someone wants to check the stats. 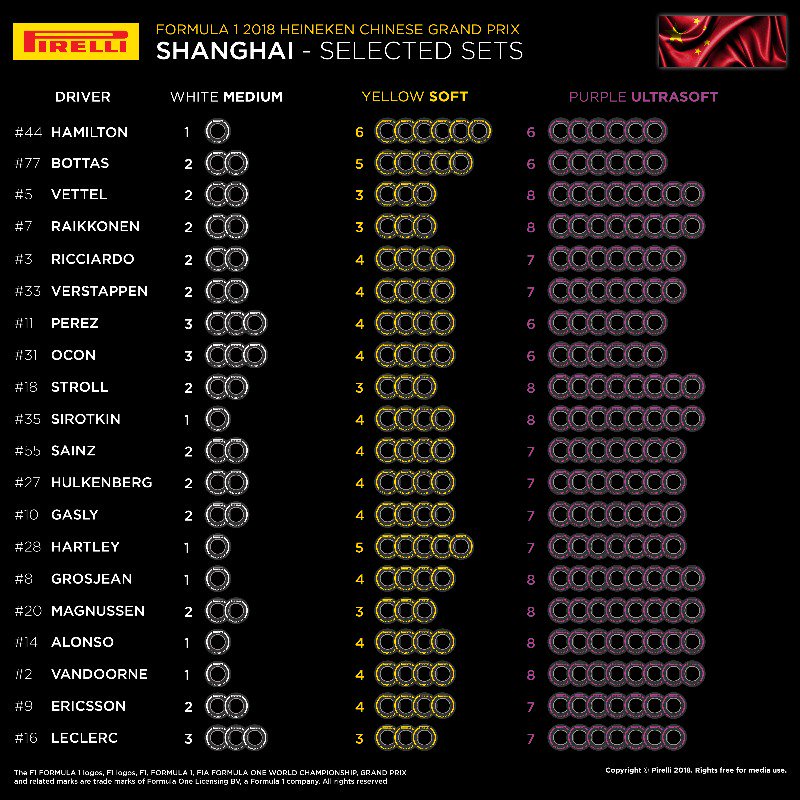 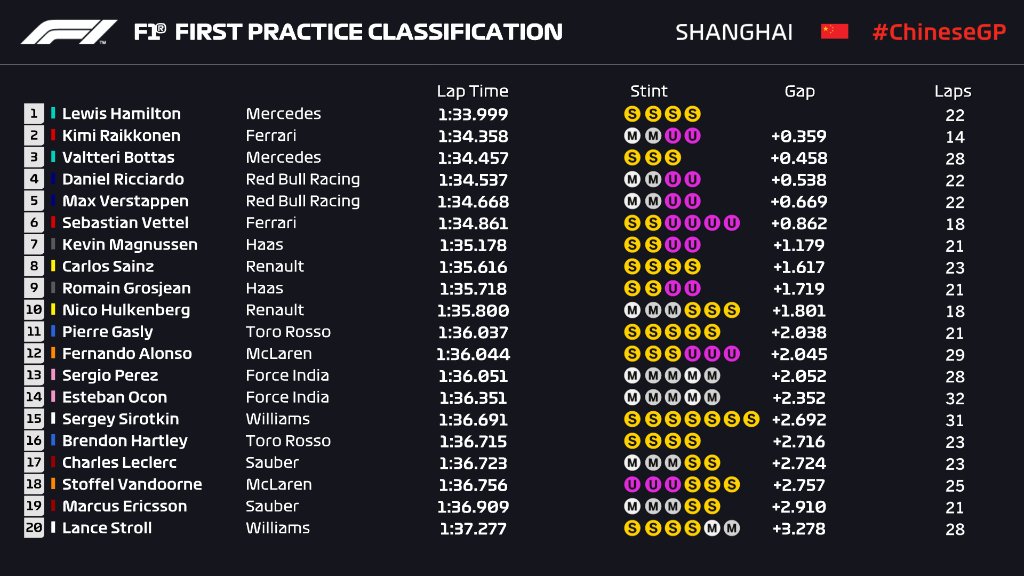 Contributor
Wasn't expecting to see Gasly so high up even in practice! 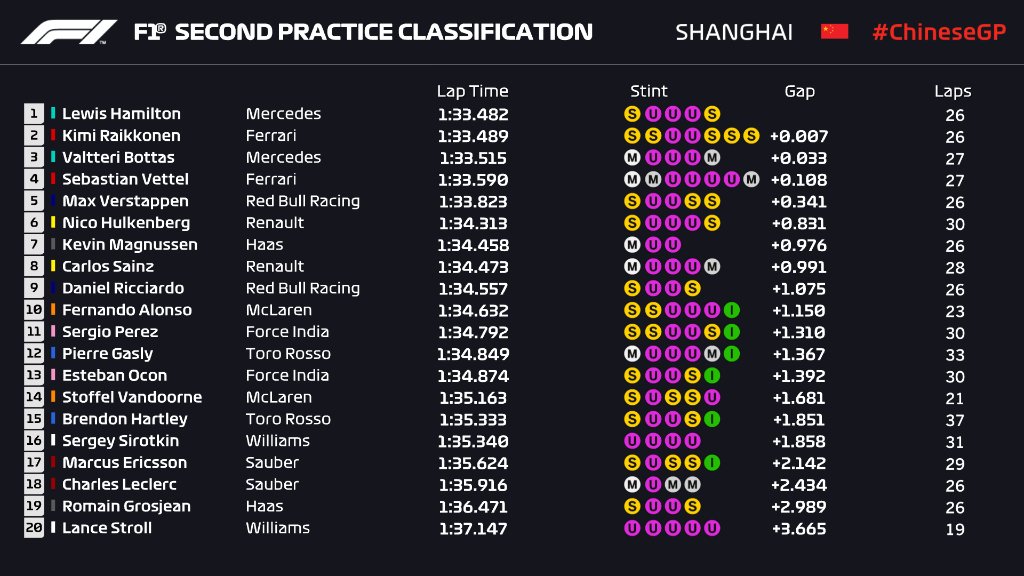 as i mentioning on bet thread, i cant confidently call this race its too close between both lewis & vettel for the win, 3 teams for the podium

been thinking for a while ever since i calculated that the 2019 Chinese gp will be the 1000th F1 grand prix, which is a huge a deal, but should the calendar be shuffled next season, because it could be an anti climax of having all the celebration, pomp & ceremony of the 1000th grand prix that liberty have been counting down since hungary last year. to annually the least attended grand prix of the season

Premium Contributor
It’s quite cold in China at the moment, It will be interesting to see how the various cars handle that. 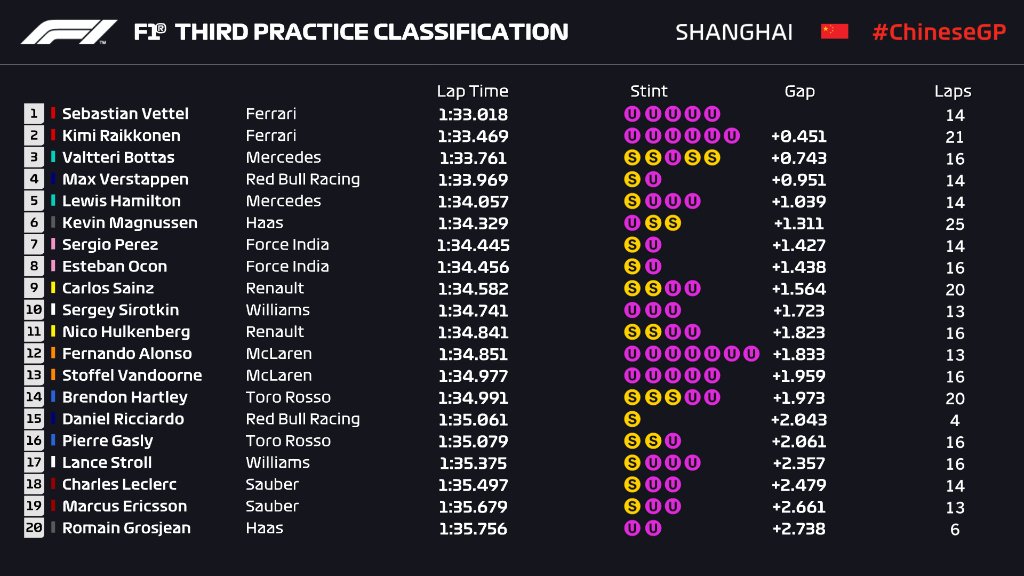 Staff Member
Premium Contributor
It has to be said, the qualification day of the first GP of the season may have been a bit too early for a certain Merc driver to engage "smug mode" in his discussion with a certain Ferrari driver.

Valued Member
Lewis is starting to beat himself and only a good result tomorrow will stop him from dropping further backwards.

Valued Member
Looks like Mercedes are particularly suffering getting tyres softer than supersoft to work.