So F1 moves on to its Shanghai noon, or Shanghai ten past noon under the new regulations, for its annual trip to China. The Clip The Apex board is still reeling from a Bahrain Grand Prix it actual enjoyed and Mercedes are still reeling from the second Ferrari victory in a row. Whilst there is a good deal of punditry suggesting these results mean Ferrari have now caught up with Merc I tend to disagree. Both races feel like Mercedes have ballsed up rather than Ferrari have solidly beaten them. The Merc has never liked the heat so Bahrain was always going to see them off form (as will Singapore later this year). China though is very much a Mercedes track. It was a Mercedes track before they were the dominant force in F1. If they don't win here then they are in serious trouble.

The problem Merc have is the opposition they are facing. He really has his detractors (some on this board) but Sebastian Vettel is a force to be reckoned with. Hamilton may be the greatest when it comes to pace and overtaking but Vettel has, and always has been, the master of defensive driving and adapting to change in situation. His ability to have to suddenly switch strategy and make those tyres last in Bahrain shouldn't be underestimated. Neither should his positioning and use of battery boost to make sure Bottas couldn't get close enough to jump him. All of this means that any micro mistake Merc make is really exploited. Hamilton is brilliant, he really is, but seemed very lost in Bahrain when Ferrari did something unexpected and his radio stopped functioning, basically turning his radio man into Red Leader from Star Wars (stay on target!). Its an area both he and Merc need to work on.

The only thing longer than the straight at the Chinese Grand Prix were the faces at Red Bull after last Sunday. Mechanical error aside you have to raise an eyebrow at Verstappens erratic start to the season. 3 crashes in 2 races, all driver error, is not what we'd expect from a talent now in his 4th F1 season. I believe the speed is there but he really needs to calm down and realise you can't win a race unless you're in it. I sound like a broken record but he continually reminds me of Jean Alesi. Danny Ric will just be hoping for a functioning car and a clean run so he can really see how the Red Bull matches up to the big two.

I love Martin Brundle as a pundit but, due to his connections with the companies that own Mclaren, I really can't trust his take on the team and its situation. Its a bit like listening to Alan Shearer talk about Newcastle United. Brundle was saying they are third in the constructors championship and Alonso is 4th in the drivers so its all good. It really ignores a lot of elephants in the room. For starters Mclaren were still not the leading Renault powered car at the end of the Bahrain Grand Prix despite two of them being out the race and one of them struggling with a battery pack throughout. This is not good for a team who prides themselves on their chassis. The other is of course the sudden form of Torro Rosso Honda. There was a lot of questions as to why Alonso switched from a one stop to a two in Bahrain when staying out would have bumped him up to 4th. Well it wasn't shown on TV but when Alonso dived into the pits Gasly had just got into DRS Zone and was about to streak past him. I honestly believe they pitted him to avoid the embarrassment of Honda going past them.

The likelihood of a repeat performance by Torro Rosso by the way is low. It was great to see them up there but on the big engine powered circuits I'd be very surprised if Honda can compete. It is great to see them making progress though. Speaking of progress, how about a minutes applause for the much maligned Marcus Ericsson and his great drive to points in Bahrain? Followed by a verse of for he's a jolly good fellow for Kevin Magnusen for finally looking like he is achieving his potential and beating up on his high rated team mate? Once we've done all that we can go look for the real Carlos Saint as I believe he is being held in a dungeon somewhere. He certainly hasn't been at the Grand Prix this year.

OK guys. Second part of a double header! Go to the second sub menu on your steering wheel, move the cursor down to that blank space and press OK to engage party mode! Then remember to deny that party mode exists. Either ways have at it.
Last edited: 9 April 2018
Click to expand

cider_and_toast said:
It has to be said, the qualification day of the first GP of the season may have been a bit too early for a certain Merc driver to engage "smug mode" in his discussion with a certain Ferrari driver.

Contributor
I wonder will Bottas drive like a dingbat from the off.

Valued Member
Interestingly, Bottas was 2 tenths faster than in 2017.

teabagyokel said:
Looks like Mercedes are particularly suffering getting tyres softer than supersoft to work.
Click to expand

According to Niki Lauda, they've set the car up for higher track temperatures. In the interview it sounded like he was suggesting that Ferrari are simply trying to get pole and aren't prepared for tomorrow, i.e. will suffer high deg.. Later on though he said that Ferrari are simply better.
So far this season, Ferrari have brought more updates to the track. This weekend they've revised the sidepod area, making it even more efficient. Some analysts are also suggesting that Mercedes are struggling to develop their car as the concept is old and their sidepod design outdated, when compared to Ferrari and Red Bull.

We're only two and a half races in and I think it's too early to make any long term predictions.

According to Hamilton they have the Ferrari engines turned right up now. Hard to disagree. I guess we'll know when the first one goes bang.

One thing that has really interested me, so far this season, is that of all of the Renault engine failures (that we know about), all of them have been in the Red Bull.

I can't imagine that Red Bull have been pushing their engines more than they have been allowed to by Renault, but it has been noticeable throughout the last couple of seasons that Red Bull suffered a lot of engine failures, especially compared with the works team, but also have had a performance advantage...

The Artist..... said:
One thing that has really interested me, so far this season, is that of all of the Renault engine failures (that we know about), all of them occurred on Ricciardo's car
Click to expand

Clearly, he's too aggressive and doesn't know how to nurse the car.

Adrian Newey's designs have always had faults. The Red Bulls never used to be as reliable as the other cars. The McLaren era wasn't too great in terms of reliability either.
Last edited: 14 April 2018

But you never know!!

but i would like to say what a miracle that was from the red bull mechanics huge pat on the back to get the car ready, i saw that car with 13mins to go & it was in no fit state, no rear cover, no wheels, no front end, no driver & was still up on the jacks.

Valued Member
Adrian Newey will always push the limit of engine installation rather than compromise the aerodynamic package. Now Renault are running their own team, and getting the hang of what to do, I suspect the requests from Red Bull to make design changes falls on deaf ears and this risks engine failure. Red Bull will have to move to Honda next season to have any hope of winning another championship.

Contributor
Ferrari tuned for conditions on Qualifying day and Mercedes tuned for conditions on Race day but I wonder who got it right? The Mercedes is awful when following but may get the undercut if they can do Hammertime when the Ferraris pit. I'm not thrilled with how the season has started but at the same time, it will be exciting seeing Lewis fight back from this deficit 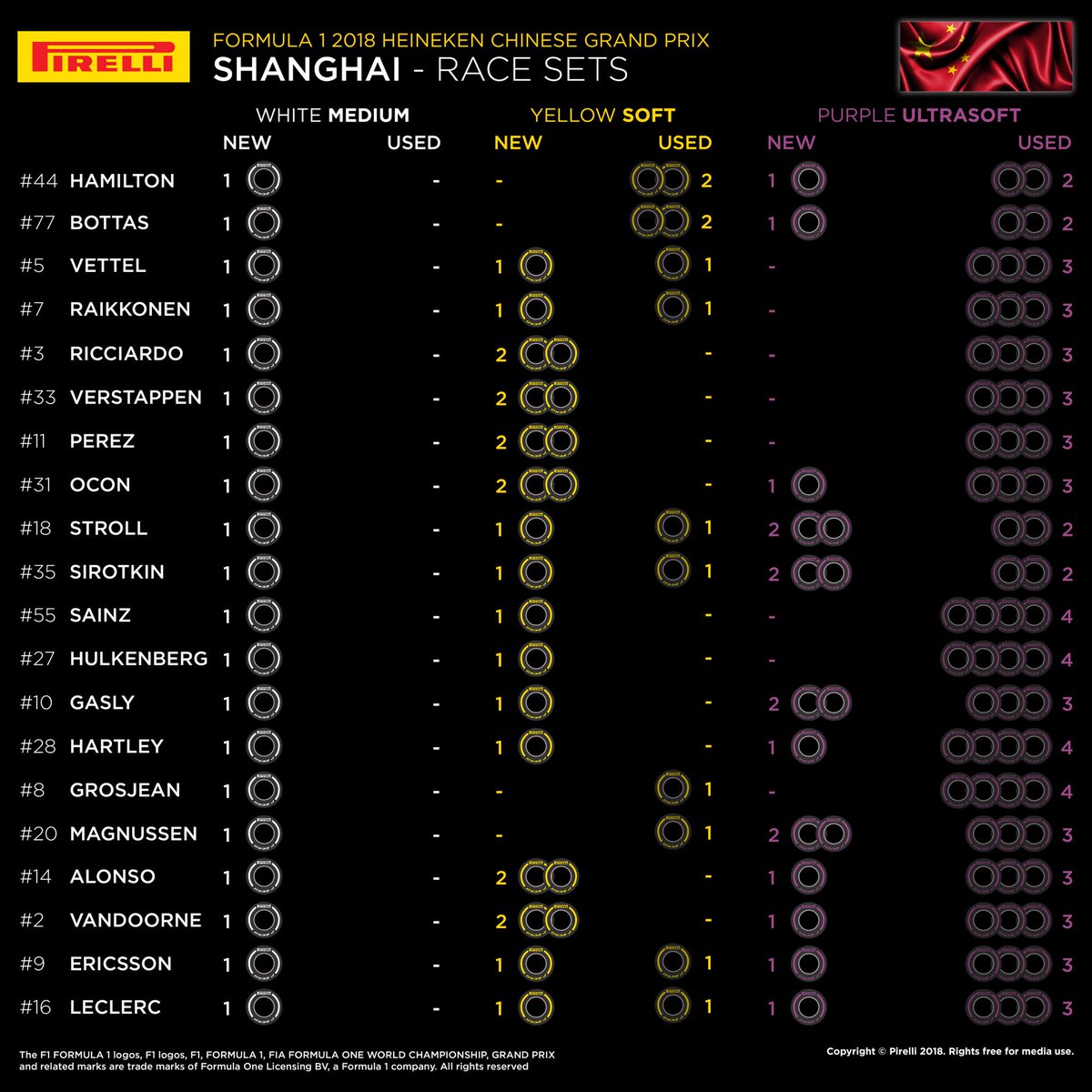 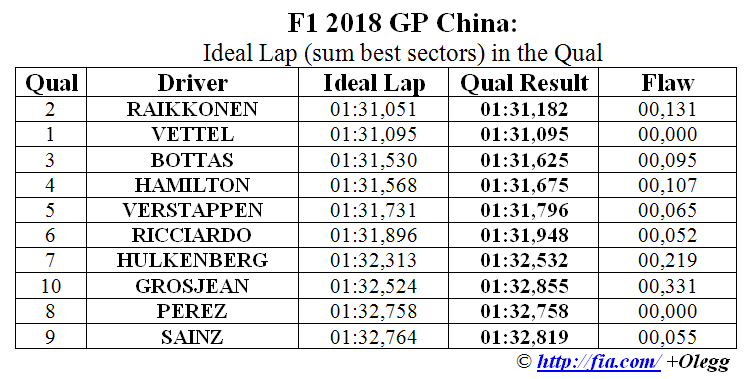 Contributor
Join us in chat for the race.

Danny drove around every car ahead while Max drove through them.

First time since 2014 that Mercedes have 'lost' three races in a row. Also, Hamilton has won any of the last 6 races.
Wurz said that Vettel and Bottas used up their reserves on each other trying to overtake and defend, respectively. Thus, didn't have much power to defend against Ricciardo.
Last edited: 15 April 2018

That was an entertaining final third but average before, had another grand prix down to the final laps albeit helped because of safety car after gasly stupid move into the hairpin. Not the 1st time this season mercedes have been undone by a safety car. As bottas before had done everything well before then. Looked like he had race sorted, so unlucky. Also feel for kimi because the pace is there. Qualy is proof in the mix for pole last 2 races & if hadnt have made big mistake in final sector wouldve been on pole. But ferrari arent even suttle about it anymore, kimi isnt allowed to race he just a road block to help vettel. Riccardio who cant help but love always has a smile on his face outstanding overtakes yet again. That man has just got such confidence on the brakes & like i say in qualifying, whole team need a pat on the back. Considering his car was pieces with 13mins to go. Just qualifying was achievement. No one could imagine in that state he would win the race 24hrs later.

Said during the race verstappen aggression is brilliant when it works its a joy to watch. Brazil 2016 was 1 of greatest wet Drives ive ever seen. but he was hit & miss like his teammate Riccardio who had as equally agressive moves but verstappen has to learn how to channel it at right moment. As impatience cost him now in all 3 races. Watching the replays i think Verstappen out braked himself into that hairpin as well look too fast at the apex

Valued Member
Another apparently flawless drive from Hulkenberg as best of the rest. Alonso drove well, his late stop allowed him to get ahead of the Haas' in the later stages (and, unexpectedly, a Ferrari) and he did well to fend off Sainz - who will again feel this was an opportunity missed.

After Perez' terrible first lap, both Force Indias stopped early and used the undercut to make progress - the SC allowed them to freshen their tyres, otherwise they'd have been under pressure from Vandoorne and maybe Stroll too. Despite this stroke of luck they still couldn't register any points. Stroll had a great first lap but gradually sank back to the car's true level.

Hartley and Leclerc had races to forget after outqualifying their team mates - the New Zealander's race pace not a match for Gasly again even before the collision. 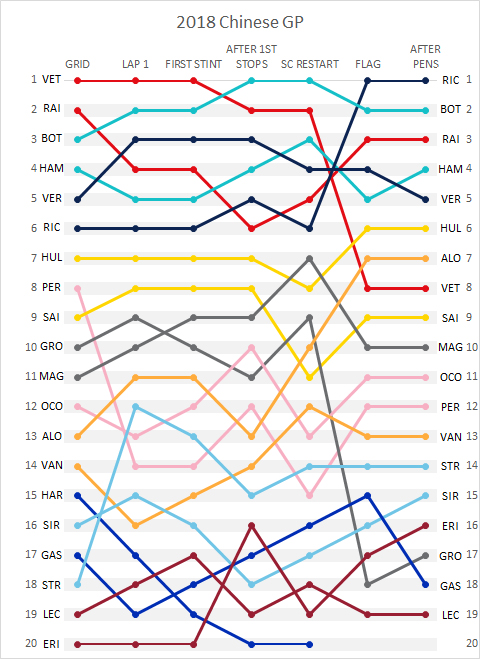