It's a long summer and the key discussions aren't about the F1.

As we are in the middle of the summer break, the SKY/BBC deal continues to take precedence over any on track action we saw at Hungary, which is a shame as we saw a cracker of a race where Jenson Button eventually won his second race of the season ahead of Sebastian Vettel who extended his lead at the top of the championship yet again and surely it takes a miracle for anyone to overtake him now with less than half the races to go.

However with Belgium coming closer on the calender, it seems as if Red Bull has lost the dominance it held over the first half of the season with McLaren appearing to have the best all round package with 4 wins now this year with 2 for Button and 2 for Hamilton. Ferrari aren't far behind and are perhaps the best team in warm conditions but that remains to be seen after a series of damp and cold races. However it would still be a foolish person to bet against Red Bull going into the Belgian Grand Prix where the fast sweeping corners and technical hairpins will no doubt play to their advantage.

Spa Francorchamps is regarded (quite rightly) as the best driver circuit on the calendar with the famous circuit having many variations from its original form to the current version which was last changed in 2006 to incorporate the new pit area and final chicane, the final chicane wasn't popular as both fans and drivers miss the challenging bus stop chicane and the 'new' pit lane which can cause problems.

The grand prix has been famous for it's unpredictable weather with violent storms and half the track being dry and the other wet at the same time and completely random showers, the big example was 2008 where a late shower caught out the entire field and cost Kimi Raikkonen (and eventually Hamilton) the win. In 1998 torrential rain caused one of the worst starts in F1 history where half the field was wiped out on turn 1, eventually (after a restart) Damon Hill won for Jordan in a 1-2 with Ralf Schumacher second, Michael Schumacher famously nearly started a fight with David Coulthard after crashing into him trying to lap him.

Michael Schumacher has an impressive record at this track, winning his first race at the track in 1992 and taking several wins at the track with his last coming in 2002 where he took his seventh world championship. However at the moment it is unlikely that he will add to his list of wins with the Mercedes well off the pace of the leading trio of Ferrari, Mclaren and Red Bull.

Mercedes might find themselves behind Force India at the race as the track suits them down to a tee, in 2009 Fisichella took a surprise pole position and then took second place just finishing behind Raikkonen in the Ferrari (who always seemed to win at Spa when he was driving there)
Sutil and Di Resta have shown impressive pace recently, with both achieving season bests at the last few races and are closing the gap to the flagging Renault team who have really lost performance since the start of the season with Heidfeld and Petrov dissapointing.

On a personal level I am really looking forward to this race as I have weekend tickets and will be at Pouhon all weekend to bring you the best coverage from the track, (better than these Sky lot anyway)

Valued Member
McLaren look like favourites to me. Sectors 1 and 3 are tailor-made for their car, with traction zones out of slow corners and long straights. Red Bull will probably hold the advantage in sector 2, but will it be enough overall?

If it rains, anything is possible. Perhaps even a Mercedes victory?

Galahad said:
Perhaps even a Mercedes victory?
Click to expand

Now you're just being silly

A dry race will give us a good opportunity to see how the 3 top teams stack up against each other.

If McLaren can capitalise on what should be on paper another strong circuit for them (where have we heard that before?

), then there's every chance they can close the gap to Red Bull in the WCC.

That surely has to be their target now for the season.

Brogan said:
I for one am hoping for a dry race, but 3 of the last 6 have been wet, so there's a 50-50 chance of it going either way.
Click to expand

Brogan said:
If McLaren can capitalise on what should be on paper another strong circuit for them (where have we heard that before?

), then there's every chance they can close the gap to Red Bull in the WCC.

That surely has to be their target now for the season.
Click to expand

Close the gap, yes. Bridge? Maybe not. Still, it will be fun to watch them try, no doubt about it.

Brogan said:
I for one am hoping for a dry race, but 3 of the last 6 have been wet, so there's a 50-50 chance of it going either way.
Click to expand

Contributor
Unfortunately, McLaren will close the gap in this race and the next, ready for RBR to stretch it back out again in the final races.

Contributor
Yeah this definitely seems like a McLaren track, cold conditions, then Monza McLaren/Ferrari, seems to be one of Red Bull's weaker tracks.

If it rains, then I like Galahad can see a Mercedes winning (that is if they don't munch on their tyres).

Contributor
I think a Mercedes powered car will win at Spa. 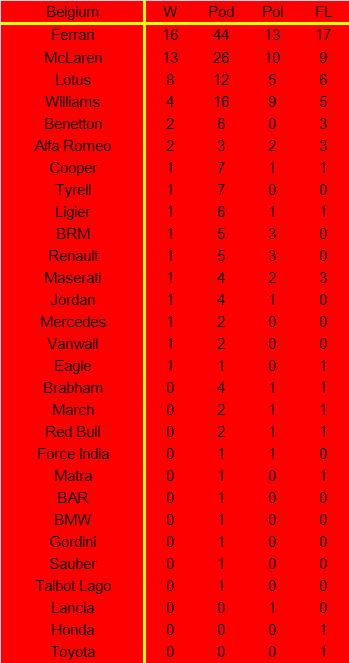 Contributor
Look out for Force India. They go well here and could spring another surprise.

Quintessentially said:
Look out for Force India. They go well here and could spring another surprise.
Click to expand

If they do and Di Resta stands out, look for him possibly to partner Rosberg at Mercedes, if Schumacher decides to call it a day at the end of this season.

seems to be one of Red Bull's weaker tracks.
Click to expand

I think Redbull will be pretty strong. They were on pole last year and Vettel was quicker than all bar Hamilton at the start of the race until he t-boned Jenson. It's hard to evaluate Redbull in damp to wet conditions because car superiority is suddenly neutralised by driver skill and I believe there are better skilled drivers under these conditions than both Redbull drivers .

Quintessentially, I think you will find that though skill is an important factor, car setup still plays a vital part in determining wet race performance. Peter Windsor said in episode 32 of Flying Lap that in Hungary, Red Bull struggled due to stiffer setup while McLarens were better suited to wet conditions. And more often than not, you will find that Vettel can easily match or better other drivers in wet conditions, like Silverston 2011 and especially Korea 2010 when he pulled out a 2 second lead on the 1st racing lap. Not to forget his 1st two wins were in wet conditions as well.

Contributor
Foaad - I think you'll find out car setup is an important factor is race performance, be it wet, dry or moist. You can also look up the relative lap times of Redbull at Hungary on the FIA website. I prefer to look at the facts rather than so called expert analysis, if you don't mind.

They were far from weak or "struggled" and Vettel was generally quicker than Hamilton in the laps preceding the first round of pitstops (and incidentally the second round too). Redbull have been so dominant at the early part of the season that there is this tendency to assume weaknesses on their part when they are suddenly not pulling out a ‘1second advantage’. By the way I didn’t question Vettel’s aptitude in the wet. I just said there are better skilled drivers in the field, before this turns into driver X against Y debate.

Contributor
I can see McLaren (Hamilton if I honest) stopping Red Bull from taking their 13 consecutive (12th of the season) pole position. Seeing as McLaren (and Ferrari) were right on the pace of Red Bull at the Hungaroring I can for the first time in nearly 2 seasons I can see them as having the overall best car. However until wee know what updates the teams are bringing to Spa and how well they work it's probably too early to speculate. The only thing that I would bet on is that there will be rain sometime during the weekend.

Just saying that if, as you said, "car superiority is suddenly neutralised by driver skill", and still you have instances of a Red Bull driver performing equivalent if not better at most times, then I dont see how you can say "there are better skilled drivers under these conditions than both Redbull drivers". Though I must say, the strongest case in point of the above statement was Schuumacher in the hopeless Mercedes in Canada.

Contributor
I was specifically referring to the status quo and I believe the Redbull is still the superior all round machine (regardless of track) although it obviously no longer holds a significant performance advantage as was the case in the first part of the season. The relative performance between the top 3 cars is now close enough to see where driver skill is making the difference. As shown by the lap chart, the Redbull was at least on par with McLaren on race pace and quicker at times, especially towards the end of stints.

Schumi and Rosberg podium you heard it here first! Weather updates as soon as i can get it

In the week of the GP the weather seems to get better and better, with a 20% chance of rain on Tuesday.

It would be nice to see schumi win again, in the place he had his first drive in f1, his first win (and his first championship?)