Contributor
So this is a quick little exercise in stats I can never stop myself from doing. The idea is to put some numbers on how well testing has gone for each team, I'm trying to answer the question of "who got the most out of testing?" rather than "who will win in Melbourne?", although the two may be linked.

This is how it works. We all know times aren't everything in testing so I combine the times with the only other piece of information that's easily available - the number of laps completed. For each day of testing I award points (using the 10-8-6 system) for the teams ranking in both time and no. of laps completed (maximum of 20 points per day possible). I then multiply that total by how many days of testing there have been at that point - i.e. the points for the first day of testing are multiplied by 1 and the points for the last day of testing are multiplied by 12. This is to represent that it's more important where you end up in testing than where you start.

Previous winners were Lotus in 2012 (who were very strong that year), Mercedes in 2013 (probably the fastest car in qualifying trim for the first half of the season) and Williams in 2014 (remarkable comeback year).

Or in the form of a graph: 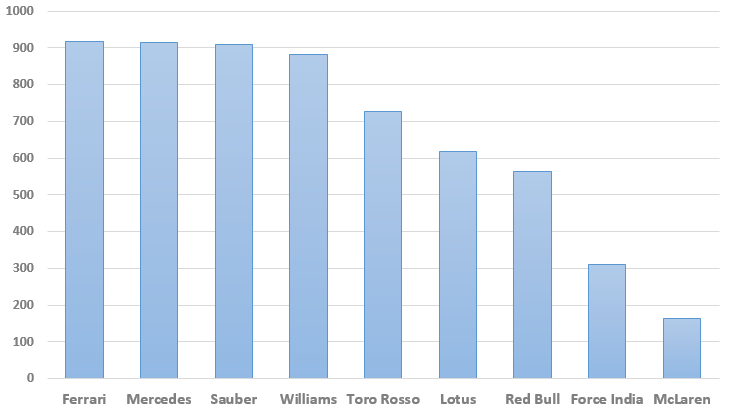 So Ferrari, who despite the turmoil last year seem to be much improved, actually edge out Mercedes to take my testing title for 2015. Although it looks like Mercedes are going to be very tough to beat again in 2015, they did have their fair share of issues (injury/illness for Rosberg and Hamilton, half a day missed in the 2nd Barcelona test etc.), which explains why Ferrari pipped them to the post in this system.

Looking at the graph, it becomes clear that really we have 4 teams that all had a very successful time in testing, with very little separating Ferrari, Mercedes, Sauber and Williams. All 4 of them will be very optimistic that they're in the best position possible going in to Melbourne. Behind them, I feel Toro Rosso and Lotus will also be quite satisfied with how things went. in particular considering their position last year (plus Toro Rosso have two new inexperienced drivers, and Lotus' new car came late).

Red Bull is the strange one, although it's nothing like the disaster they went through last year they've been pretty unspectacular. They only lead the times on one day and at no point did they complete the largest number of laps. At the last test, the best they could manage in either time or laps was 4th. You'd expect their chassis to be strong again but it seems like Renault still isn't on top of the engine and I won't be surprised if they start the year less competitive than Ferrari and Williams.

Force India obviously had a difficult testing as they only had two and a half days with their 2015 car, although I did award them half points for the running they did with their 2014 car in the 1st Barcelona test (note that even if I awarded them nothing for testing with the old car, they still would have beaten McLaren just with their 2.5 days running with the 2015 car). They're clearly nowhere near as prepared as they'd like to be for Melbourne but they were able to run reliably with the 2015 car and there seemed to be no major issues.

McLaren had an absolute nightmare with endless problems with the Honda power train. The only valid point of comparison is Red Bull's experience in 2014, and that tells you everything you need to know about the position McLaren find themselves going in to Melbourne. At least they have a size zero chassis, right?

Only two weeks to go to see how things actually work out!
M

Really hoping that McLaren get their act together because it would be massively unfortunate if Button and Alonso spent the whole year just doing development tests for the 2016 car. Should be fascinating between Williams, Ferrari and Red Bull and I'm hoping the Force India is fast as well as seemingly reliable. I reckon Merc will have similar team instructions to last year...don't hit each other and once the Manufacturer title is secure its gloves off.....

Contributor
This is such a good thread and seems to have been discussed so little. Great Maths once again sushifiesta

I'm surprised at how strong Sauber have come on so far. Its most likely the new Ferrari engine but it certainly seems they've swapped places with Force India. I was expecting Enstone to come on stronger but I guess there is time.

Proof is in the pudding not the tasting though.

Contributor
The problem for Force India was how late their new car was ready. Lotus also had a slow start and Sauber maybe took more fuel out than the rest. We'll see how it plays out.

Contributor
The Championship has already been decided in many peoples minds but I am very interested in the season. With all the new drivers on various teams, a new engine and new owners of Manor, there are a lot of things we just can't predict.

Valued Member
Ferrari's work over the winter with their engine consultants seems to have borne fruit. I hope they are more competitive this year and Red Bull and Williams can get seriously closer to the two Mercs.

Contributor
Pretty happy with how well this is linked to the team's actual performance (at least performance gains/losses relative to last year). The apparent gains of the Ferrari powertrain are real.