Contributor
In the new V6 regulations the number of engines and related components that can be used by each driver during the season is heavily restricted. Originally, the limit this year was going to be a crippling 4 units of each type for the whole season although it now looks like that will be increased back up to 5 after the struggles of many of the manufacturers in Australia. There was a thread to keep track of how many components each driver had used last year, and I'll try to keep this thread updated for this season as well.

The various components that come under the restrictions are:

The FIA provide technical documents with a list of the number of components used by each driver at the start of each race weekend. Here's the status going in to Malaysian grand prix: 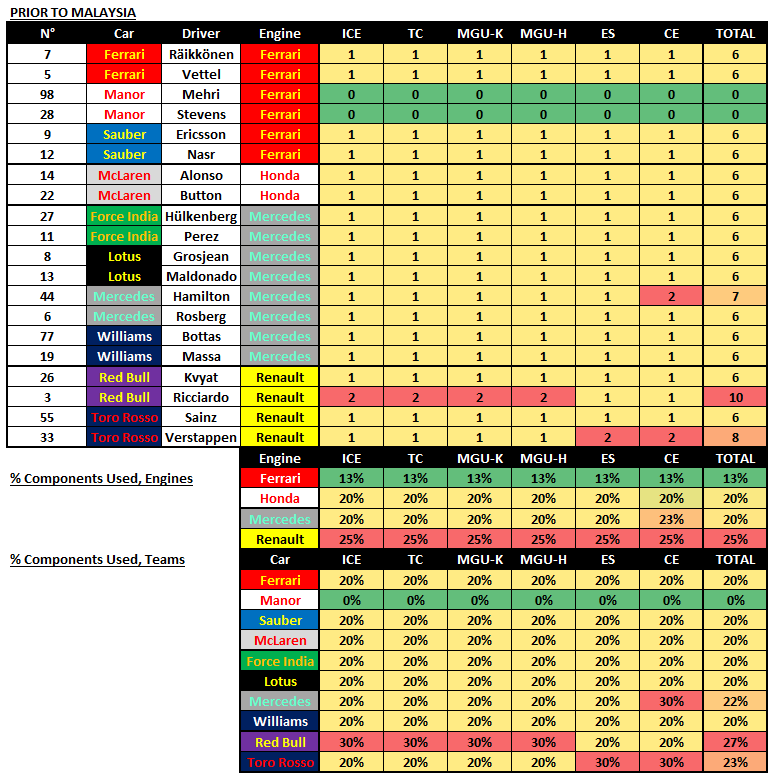 As is well documented elsewhere, Renault had a difficult start and Ricciardo's already had to use a second unit of everything except the batteries and control electronics. If the optimists at Renault were thinking "well at least the batteries and control electronics are ok", then they're out of luck because Verstappen had to replace those which makes a clean sweep of 2nd units used for the Renault powered cars.

I mentioned this under the Hamilton thread yesterday but it slipped under the radar during the weekend in Australia that Lewis had to replace the control electronics on his car. Not the ideal start to the season but it shouldn't be a major issue as many of the Mercedes powered teams got to Abu Dhabi last year having only used 4 sets of control electronics.

Ferrari come out as looking super reliable in the percentages thanks to Manor not leaving the garage and not putting miles on any of their components in Melbourne.

EDIT: Oh yeah there's Honda too... well they went on a nice Sunday drive putting as little stress on the components as possible. It looks like Magnussen's failure on the way to the grid has not required McLaren to change the engine, though.
Last edited: 28 March 2015

Contributor
The Renault powered teams and McLaren Honda are heading towards a lot of grid penalties this year at the rate they're consuming units: 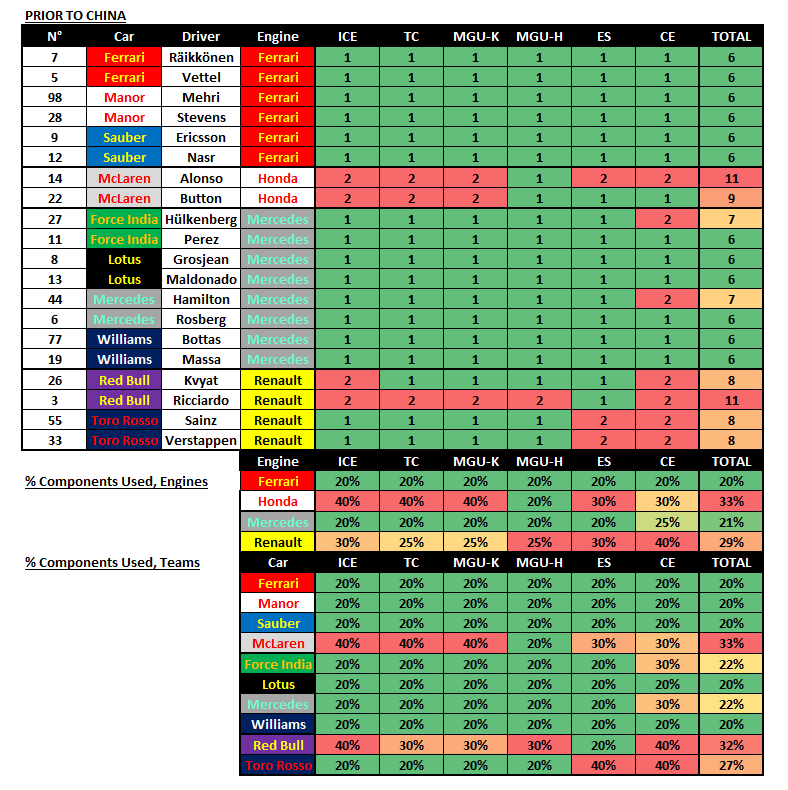 This should prove to be a very useful resource this season.

Contributor
Update for the state of play as it was after the Chinese grand prix, and things start to look pretty gloomy for McLarens and the Renault teams. I should point out that at the moment all the percentages in the tables are based on the teams having 5 units of each type for the season but the current rule is 4. It sounded like the rule was going to change but news on that front has gone quiet again so if there's no new news by Spain I'll change the percentages to reflect that. 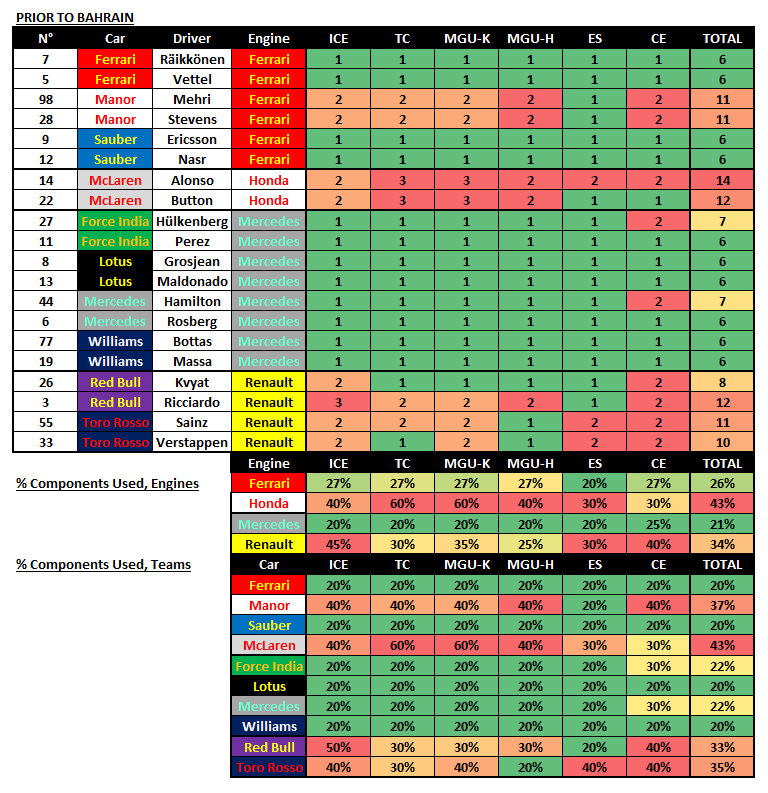 Staff Member
If it does remain at/reduce back down to 4, some teams/drivers are in trouble.

Staff Member
Premium Contributor
Amazing, the same number of bits have been replaced on Alonso's car as all 8 Mercedes cars combined.

Staff Member
Premium Contributor
This also shows that Renault and Honda have a strong case to make "reliability" upgrades.

Contributor
Seems likely that Ricciardo will have to use his 4th engine in Spain already after his explosive end to the race today.

Staff Member
At least it blew close enough to the line that he was able to finish.

Staff Member
Premium Contributor
The old Colin Chapman saying "an F1 car should last long enough to cross the finishing line, anything beyond that isn't important"

Staff Member
That was in the days when they weren't limited to 4 engines per season though.
M

Contributor
What happened to the rule that stated if an engine blew up during the race and the car didn't finish then that was considered penalty enough and you could get a free power unit?
M

Contributor
Can I have a clarification? If their is say a 2 in the ICE column does that mean a driver has used two and is on his third or does it mean he has used one and on his second?

Also it is my understanding that the Honda engine that let go in Australia on the way to the grid was in fact reusable...
Last edited: 19 April 2015

Contributor
It's the number of units that have been put in the car at any point. So 2 in the "Prior to Bahrain" table means the driver used 2 units of that type across Australia, Malaysia and China. They can go back and use old units if they still function and later in the season I think this becomes increasingly the case on Fridays before they swap a new/newer unit in for qualifying/race.

The engine reliability rules were completely overhauled in 2014. They can change units as often as they like now as long as they don't use more than the total allocated number (4 as it stands but maybe increased to 5). Penalties are only given once they use a new unit outside the allocation.
Last edited: 20 April 2015

Contributor
Ricciardo will be using his 4th engine in Spain and the limit will be changed to 5 for the season:
http://www.autosport.com/news/report.php/id/118608

Valued Member
I wonder if the upgrades Ferrari have planned from Canada onwards will be as "successful" as Renault's have been from over the winter.

Contributor
Renault are actually the team that introduced the least amount of updates over the winter... so figure that one out.

Staff Member
Ricciardo has lost another engine during FP2 for the Spanish GP.

Contributor
So much for Renault's "focus on reliability"!

They are looking even more hapless than Honda, especially when you consider how much more recent experience they have than the latter.

Staff Member
Apparently the proposal to increase the engine allocation to 5 is going to be rejected next week.

"Formula 1's Strategy Group will next week reject a proposal to increase the engine allocation for this season to five, AUTOSPORT has learned."
"AUTOSPORT understands Mercedes and Red Bull are in favour, but on cost grounds Williams, Force India, McLaren and Ferrari will vote against."
Click to expand