Contributor
It was a very stage manager victory it has to be said. I hope Alonso comes back when there is a competitive LMP1 catogey and shows us he really is good enough to be a winner.

Car number 8 turned it's wheels before being lowered in the pits. Illegal but no penalty.

Car number 7 misses a pit stop with around two hours to go taking it off the lead lap and leaving car 8 free to run home.

Toyota the only hybrid team and through ACO equalization rules the only LMP1 team in with a hope of winning.

Congratulations to Alonso and car 8 on their fantastic win.

Premium Contributor
I hope he never wins the Indy

Contributor
I think it's semi impossible to implement team orders at the Indy 500.

Congratulations to Matt Adore.
A bitter victory, at least they didn't urge a driver of the #7 car to crash. They let it run out of fuel; the safer option.

After the race in Spa, it was quite clear that they would do the same in Le Mans. It's come to no surprise that motorsports has an image problem, because these kind of tactics would be frowned upon in any other sport.

Contributor
Well, I thought he did a good job- his night-time stints to claw back a 2-minute deficit were quite impressive (even “Mr Le Mans” thought so). And I hope he wins the Indy 500 too- he (& the Hulk, etc.) are bringing back the tradition of the complete driver, which can only be a good thing in this age of corporate biomatons.

RasputinLives said:
I think it's semi impossible to implement team orders at the Indy 500.
Click to expand

Valued Member
There's a bit of sadness since Alonso was definitely a deserving winner, and Toyota deciding to interfere to ensure his victory rather takes the shine off it.

The average stint times confirm that he was the fastest of the six Toyota drivers. But his successful night stint - incredibly fast and consistent as it was - was aided considerably by how slowly the #7 car was being driven at that time.


Alonso took over the car for his second stint at 1:30am. After Buemi was penalised for speeding in a slow zone, he had a deficit of 2m17s to the #7 car. Two and a half hours later when he handed the car over to Kazuki Nakajima, the gap was down to 42 seconds. But it wasn't that he was driving exceptionally quickly - both his daylight stints were marginally quicker - it was that the #7 was being driven 1.5 - 2 seconds per lap slower than it had been. Crucially, once Nakajima had moved the #8 back into the lead, the #7 resumed lapping in the 3m21s bracket.

All of which could subtract from Alonso's achievement. I find the fact that he was the fastest throughout the race very impressive. It's just a pity we didn't get to see whether he could have won without extra help.

Contributor
Like I've said elsewhere - I have no doubt that Fernando Alonso is a supreme talent who is more than capable of putting in an awesome performance to lead a team to a win at Le Mans. I just hope he comes back and does it against competitive none rigged opposition so I can get excited about it.

Valued Member
Jenson was Mr. Consistent, for a change, and got a lot of laps in despite not quite making the finish.

i just cant get excited over the le mans victory. because it just seem a hollow victory & a means to an end for Alonso. it will have a question mark on,because they were only racing themselves. Toyota shouldnt been allowed to be the only hybrid LMP1 as how can we in the same LMP1 category have a gap of 12 laps, that was Toyota with their engine turned down I'm sure, its like an F1 beating F2 car. then trying to make out like it was some kind of achievement. i mean no offense to #7 toyota but it was stacked in the own team, because you have Seb Buemi in my opinion the best driver outside F1 & Alonso 1 of the best in F1. V Mike Conway Kamui koybiashi & JM lopez. It was hardly equal. then i cant help but think of the conspiracy theories, because everything just felt too stage managed #8 wins with Japanese taking the flag. it was just too much of a perfect script for sport

but i will give credit where credit is due, that night stint from Alonso to reduce the gap from 2 mins to 40 secs was highly impressive & won le mans there

Contributor
Did anyone else notice what to me seemed obvious about the Toyota drivers? It wasn't about Alonso, he was only the vehicle which Toyota used to get their success. Both cars had a Japanese driver for the final stint and this is what Toyota will be pushing, especially for Nakajima who comes from a 15 minute drive to Toyota, the fact that it was Japanese drivers who finished first and second.

Staff Member
Premium Contributor
Yeah, but it was all about Alonso, that's ALONSO in case we hadn't noticed.

Illegal fuel rig.
I think this is called 'doing a Benetton' except of course they got away with it. 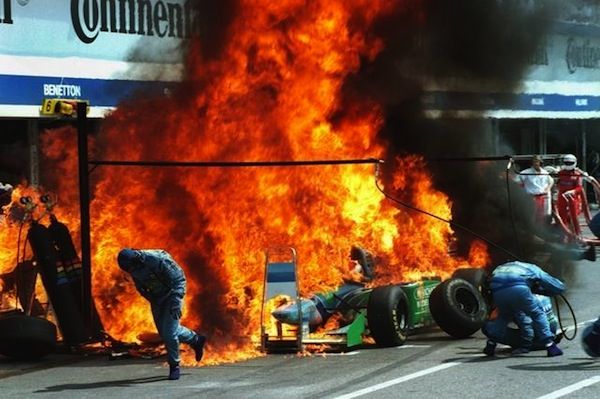 Contributor
They should of been thrown out the race or even the championship.
Interesting summary for anyone who enjoys dragging up the past. Link.

That was pretty ballsy for G-Drive. When your pitstops are six seconds faster than every other team, and their cars are identical to yours, you can expect that to attract attention, no?

Contributor
It clearly did. 6 seconds over 37 pit stops adds up.

Staff Member
Premium Contributor
3 Minutes and 42 seconds to be exact.