Valued Member
Next weekend sees the 83rd running of the most famous motor race in the world. This year LMP1 has 14 entries, works teams from Audi, Porsche, Toyota and Nissan and Rebellion Racing and Team ByKolles also preparing cars for the senior category. All the runners in LMP1 will be on Michelin tyres but there the similarity ends. Audi have a 4 wheel drive turbo diesel hybrid, Porsche have a 4 wheel drive turbo petrol hybrid, Toyota a 4 wheel drive naturally aspirated hybrid petrol engine and Nissan a front wheel drive turbo hybrid petrol engine. Rebellion and ByKolles will use Toyota naturally aspirated petrol engines prepared by Advanced Engine Research of Basildon in Essex. The engine rules in LMP1 are a based on the total power output of the internal combustion engine and the hybrid system. The 4 wheel drive system is not full time, the drive to the front wheels is only activated over 120 kph.

LMP2 has 19 entries with cars from Ligier, Morgan, Oreca, Dome, Gibson, Alpine and BR Engineering. They will use tyres from Dunlop and Michelin and engines from Nissan, Judd, Honda and SARD (a Japanese tuning company who prepare Toyota engines). LMP2 cars are heavier than LMP1 and don't have hybrid systems. They are limited to 5 litre naturally aspirated engines and 3.2 litre turbo or supercharged units. LMP1 cars must have closed cockpits LMP2 can have open or closed.

Here's the entry list, you may recognise some of the drivers: 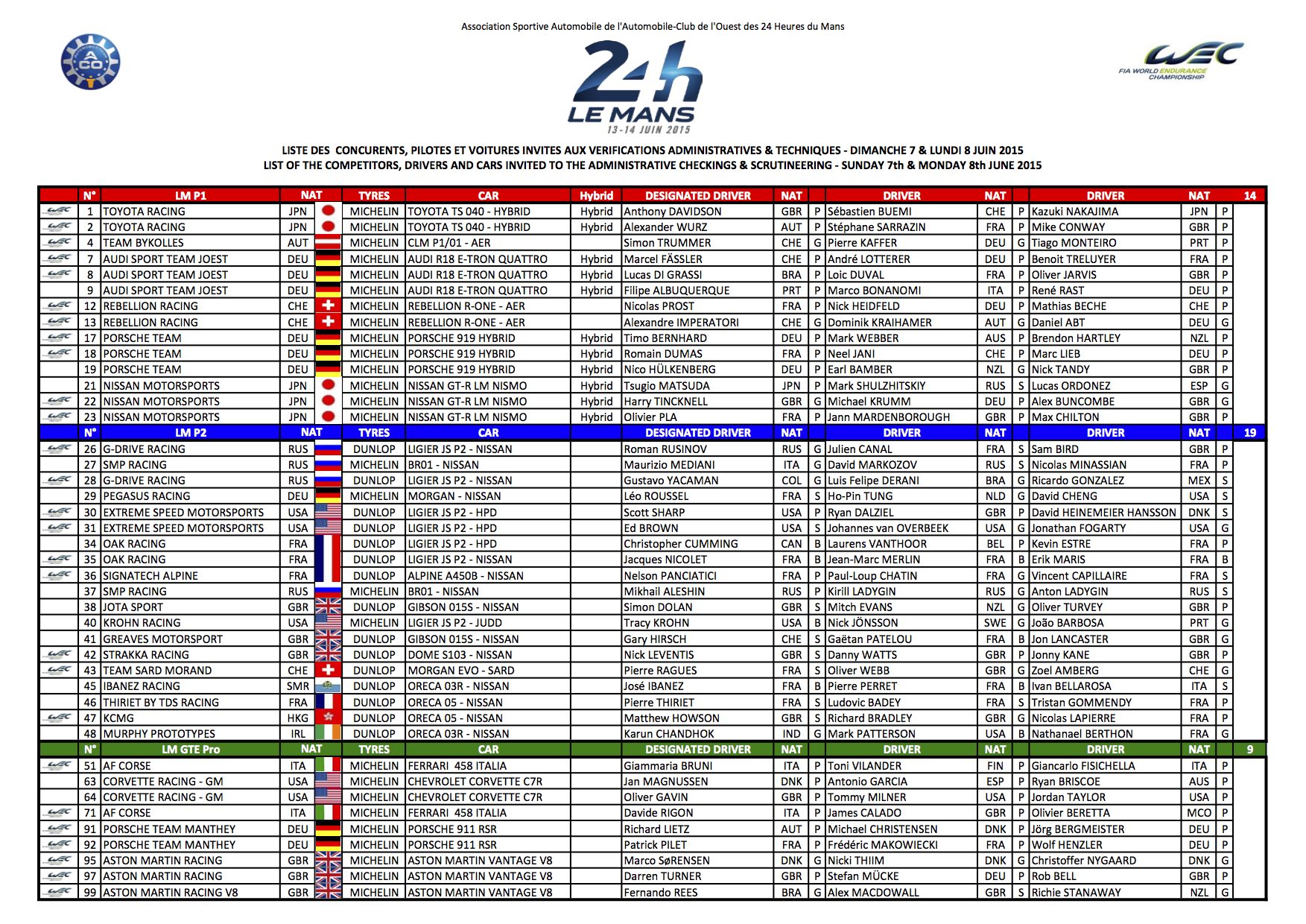 Qualifying is this week (10th and 11th) and takes place during daylight and in the evenings. If you have never seen these beasts running at night, take time out to watch some of the qualifying on Eurosport. The race starts at 3pm CET on Saturday 13th and, strangely, finishes on Sunday at 3pm CET.

At the front, expect a titanic battle between the Audis and Porsches but don't rule out Toyota as the race can have a really high level of attrition and sometimes cars spend long hours in the pits having major work done to them. You will see cars with huge speed differentials racing on the same track without any major complaints from the drivers about problems with blocking or the need for blue flags. LMP1 have white headlights, LMP2 yellow so the GTE boys know just how fast the cars coming up behind them, flashing their very expensive headlights are.

Try and take some time to watch the race. Although an endurance series these guys really do go flat out in each driver stint and will hit some incredible speeds along the Mulsanne straight, even with the chicanes.

Valued Member
Terrific races (across all classes) in prospect this year. Hopefully Nissan's test day pace wasn't representative, and they will be there or thereabouts in the race - will probably need high attrition to reach the podium, though.

Here's a link to Andy Blackmore's fantastic spotter's guide. Look out for Aston Martin no.97, which will be unveiling a top secret "Art Car" livery specially for this year's race. 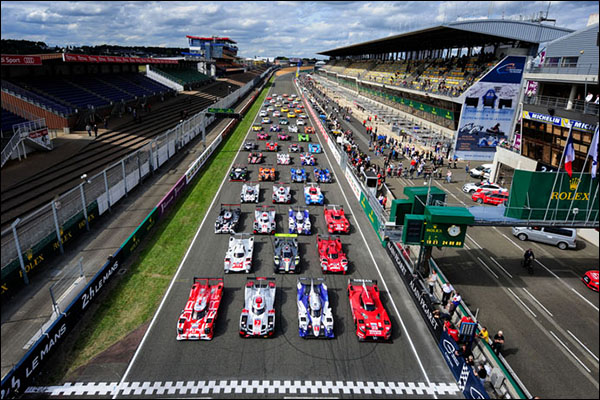 Valued Member
Radio Le Mans has the three preview podcasts led by John Hindhaugh up and available to listen: episode 1 covers the GT classes, episode 2, the LMP2 battle, and the LMP1 class in episode 3.

Contributor
No garage 56 entry this year?

Valued Member
Sadly not. Apparently there was at least one application, but nothing that the ACO considered innovative enough - which is probably to their credit. So the 56th garage is occupied by a conventional entry instead.

Valued Member
The "art car" Aston has been unveiled. To be honest I'm glad I'm not driving it, I suffer with migraines.

It's like looking at a bad trip, at least a good chunk of the race is at night.
Last edited: 9 June 2015

Valued Member
For viewers in Britain, Eurosport is the appointed broadcaster as usual. Apart from two half-hour breaks for the "24 Minutes" summary programmes, coverage should be continuous throughout the day and night.

Am I the only one who thinks the art car is pretty cool? Like yeah, no way in hell I'd buy or even drive a car with that paint job but it looks really REALLY different from anything else I've ever seen, even on art cars. Looks like it would function great as testing mule camo (a la Red Bull testing this year). And its a fascinating way to interpret the space of the race car. Anyways I'll just go on appreciating art all by myself.

Valued Member
I wonder what it would look like if you viewed it through 3D glasses?

Staff Member
Premium Contributor
I was thinking that myself.

On another question. What do the driver ratings, platinum, gold, silver and bronze mean?? I see Max Chilton is rated Platinum so it can't be that important.

Staff Member
Premium Contributor
Cheers for that mate. Other than the criteria leading to a classification, it doesn't amount to much else then.

Take a look at this, it's really cool

Contributor
This may well prove to be one of the truly epic Le Mans of all time. The Porsche vs Audi aspect is particularly interesting as it amounts to fratricide. I expect the Porsches to show their speed early and lead probably the entire first half of the race. I still expect Audi to take the win as Joest is still the Audi team and has either 13 or 14 Le Mans races already under his belt, including a large number of Porsche's overall wins.

It seems strange to be here and not have the expectation of seeing the great Kristensen going for another record-shattering win. The place seems a little empty without him.