Contributor
As the tire smoke from the Hybrids fades and clears you'll be able to glance over and see the battery on the electric single seater series has reach 100% and Formula E 2017/18 is ready to go. First stop is Hong Kong for a double header. I have very little memory of the track from last year but I remember the crowds being large which is probably why we are kicking off with a double header. The track will fit the usual bill of being a tight street circuit with lots of 90 degree corners. Some people love that and some people hate it but as we've seen it does lead to close racing in Formula E.

So whats new this year? Well the power outage has been upped from 170kw to 180kw which means the cars should be faster this year (or the race distances longer). Abt has now become the full works Audi entry as the German giants 'go early' on the big manufacturer Formula E pile on, BMW are here too as the official 'sponsor' of the Andretti team - although there are rumors they are more heavily involved than they are letting on. Renault are still here but this will be there last year as they become a full factory Nissan entry next year, the calendar issues that have plagued the series have been addressed so we are at least getting a race every month with no massive gaps and the the field has had an influx of LMP1 drivers come to see what all the fuss is about. In truth this is a transition year for Formula E as its the last season we'll see car changes (we think), the season before the new Mclaren built battery with so much more power is introduced and the last season of the current Spark chassie. The 2018/19 chassie by the way will look like this! 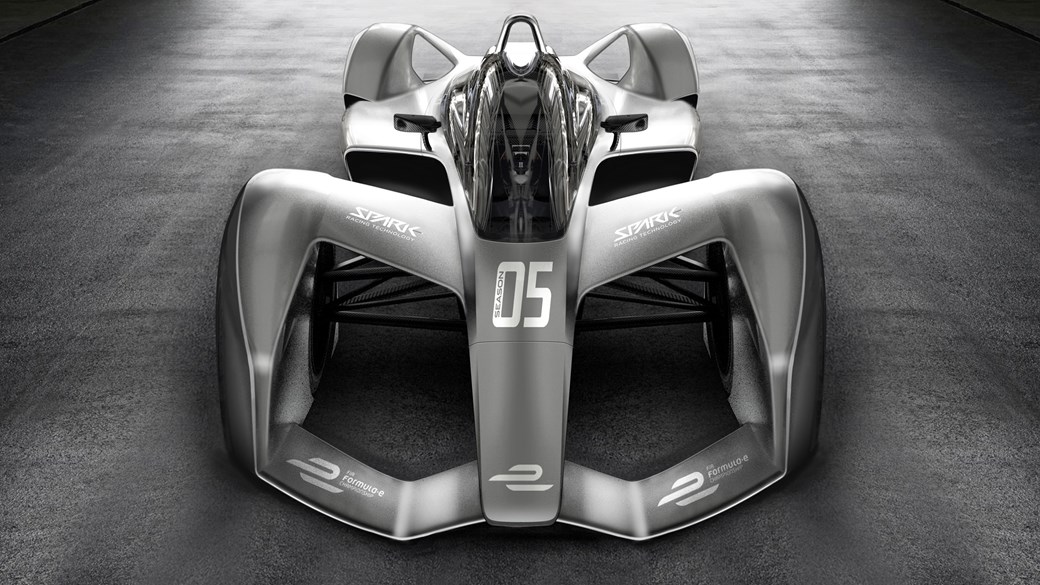 Lets not jump ahead of ourselves though as we have a whole season of action to look forward to and Formula E never seems to let you down if you enjoy close wheel to wheel racing.

From testing it looks like we'll have the same battle at the front as we've had for the last few years with current champion Di Grassi going up against Buemi whilst their well connected team mates languish behind them. The difference this year is that its Audi who looks like they are in front and not Renault. Audi have a new one gear system that really seems to be working for them (something they copied from Virgin) whilst Renault have stuck with the 2 gear system. To be honest I'm just looking forward to seeing what mood Buemi is in after he cost himself the title by skipping a round to drive in WEC last year. He was a very angry chap. If you've not seen the time he walked down the pit lane and tried to pick a fight with nearly every one he saw then here it is (if you did see it then watch it again!).


There are 3 teams lurking just behind these front two that could surprise us and get in the mix. They are Mahindra, DS Virgin and Jaguar. Mahindra, the little Indian company thats got in with the big boys, are fastly becoming nearly every Formula E fans favorite team due to their interaction with the fans (my signed free shirt from testing last year says that!) and whilst they have Quick Nick who is the less offensive of the F1 refugees (i.e. he is worth his seat), their real secret weapon is Felix Rosenqvist who stormed into the series last year and showed how talented he is. If that Mahindra is good enough I can see Felix pushing for the title. DS Virgin are pretty much in the same position as they've been since day one, nearly at the front but not quite. Sam Bird has won races every season and I have no reason to doubt he'll do that again. His new team mate is Alex Lynn, who is often thought of as the poor man's Sam Bird. Lynn has pace but often messes up when in the pack - this doesn't bode that well for Formula E. The outside shot this year is Jaguar who continued to improve and get on the pace all last year and seem to have taken a step forward. Back for a second year for them is the immensely talented Mitch Evans, it remains a mystery to me as to why he never got an F1 drive. Joining him this year is everyone's least favorite driver ever Nelson Piquet Jr. As much as we all hate him we shouldn't forget that he won the title in the first year as he was head and shoulders above anyone else when it came to saving power - I think if he gets a sniff at a win he'll prob take the chance.

Alex Lynn isn't the only rookie in the field with Andre Lotterer, Edoardo Mortara, Neel Jani and Luca Fillipi all joining the grid. We also have a crazy situation of an Andretti seat being shared between Tom Blomqvist, Alexander Simms and Kamui Kobayashi. This seems par for course for Andretti though. To be fair to them Kobayashi is a one off for Hong Kong because of a sponsor influence. I can't see any of these guys really having and impact on the front of the race but I'm a big fan of Lotterer and believe he and Vergne at Techeetah are probably one of the strongest pairings. Problem at Techeetah is they are a customer team of Renault and get next to no testing - as we saw last year by the time they've figured the car out the title has walked away from them. With Merc set to come in the series its interesting to note that Venturi are running two drivers from the Merc young driver program!

Thats as much as I can tell you about the new season as its always very hard to predict. As usually all the races are shown live on the Formula E website. In the UK they are being shown live on Eurosport and all the races at least 'delayed' live on CH 5 with that well known sports presenter Vernon Kaye.

I'm sure it surprises none of you when I say I love Formula E. I invested in it from the start but actually I keep coming back because the racing is good. Even the dull races bring action and something to get excited about. So are you guys dreaming electric or do you think the whole things needs a bulb change?

Contributor
Are they really going to put out cars looking like something from the deep waters of Blue Planet II?

Contributor
I think it looks pretty cool if I'm honest. Of course it will be ruined by the Halo but so will all single seaters.

By the way - factoid - the fuel used to power the charge of a Formula E car is so clean it ca be safely consumed by a human. It's all animal fats so I Wouldn't advise it but there you go.

RasputinLives said:
....the fuel used to power the charge of a Formula E car is so clean it ca be safely consumed by a human. It's all animal fats ....
Click to expand

I hope that the vegans don't get to hear of this: there was enough fuss about a small amount of one cow that was used in several million five pound notes.

RasputinLives said:
With Merc set to come in the series its interesting to note that Venturi are running two drivers from the Merc young driver program!
Click to expand

Just to stir this pot even further Venturi have today announced a partnership with HWA who ran Merc's DTM entry, their GT entry and produce their Formula 3 engines.

I think we know what's coming. Don't be surprised if Pascal Wehrlein suddenly turns up driving one later in the year!

Valued Member
Merc are already making noises about packing in F1 after 2020 so we knwo where they are going. Back on planet earth, I'm looking forwrad to Formula E this season although I suspect it will be an Audi versus Nissan battle with the remainder up for the minor placings.

Contributor
I tend to agree. I can't see past Buemi vs Di Grassi part 3 but I think our erstwhile moderator and chief cider_and_toast might think (or hope. different with his Jaguar leanings.

Staff Member
Premium Contributor
I want to see Jag challenge for the top 3 this season. I think that's realistic.

They've got a strong driver line up and the rate of development of the car over last season points to a team on the up.

Contributor
Problem they might have is I reckon that the field is going to be a lot closer this year. I Wouldn't be surprised to see race wins for half a dozen of the teams.

i hope we get a good close battle but i cant see it. but Buemi has been on a different level all 3 years missed by a point 1st yr, won it 2nd yr & shouldve retained it but for 2 disqualifications & missed 1 event for WEC. also in the last 2 years / 20races he competed in. won 9 & finished on podium 3 times thats 60% success rate

Contributor
They say Audi is the superior car in race trim this year but it's anyone's game on one lap pace.

If you want to have a go at predicting the pole sitter and the top ten then you can sign up for the new predictor game launched on the Formula E website - free to play.

Contributor
I Don't know if anyone wants to play or not but I set up a Clip The Apex league if you do.

Anyone got any idea where the last two laps can be seen?

Anyone got any idea where the last two laps can be seen?
Click to expand

You can listen though.

Yes my Channel 5 Freeview recording stopped 2 or 3 laps from the end. I think they cocked up their programme end marker.
Last edited: 2 December 2017

Valued Member
There was quite a lengthy red flag period which would cock up all the PVR timings.

rufus_mcdufus said:
Yes my Channel 5 Freeview recording stopped 2 or 3 laps from the end. I think they cocked up their programme end marker.
Click to expand

yeah we had a 20 min red flag but i dont know channel 5 coverage overran on a event that had happened. because surely they knew