If Senna had lived

Just throwing this one out there, just to get people's thoughts. Had Ayrton Senna survived the crash that caused his demise, how many more world titles do you think he'd have won? My personal view is that it may have been another 3. I think he would have won the 1994 season in which he died, as Damon Hill came very close, and as much as I respect and like good old Damon, I don't think he was ever in the same class as Ayrton. When you consider the Williams domination of the next few years, surely it could have been possible for Ayrton to have won the next couple or more titles in a row. It could also have affected the amount of titles that Schumi won as well.

Valued Member
I think he'd have won four in a row if he'd stayed with Williams, 1994-97, and then probably retired. So many other things would have changed, though.

I think Senna would have come back to win in 94 and because of that Renault would not have given their engines to Benneton for the following season(meaning the team would never become Renault!) and therefore Senna would have won in 95 as well. At this point he'd prob have fallen out with Frank over wages and because he now had his 5 titles would sign a deal to go and spear-head a Ferrari rebuild. Leaving a young Michael Schumacher to go to Williams - probably alongside some young up and comer from indie cars name Jaques Villeneurve. Schumi would prob have got at least one world title out of that before the Renault demise and a probable move to Mclaren Mercedes for 98 or 99.

We know that Senna was about 1 second a lap faster than Hill ... and it's very hard to imagine Senna being 1 point behind Schumacher going into Adelaide for the finale.

Further, Senna was going to talk to the FIA about Schumacher's Benetton B194 after Aida...but at the next meeting Barrichello had his nasty shunt on Friday and Ratzeberger was then killed on Saturday...

Therefore, not only would Senna have been World Champion in 1994, but Schumacher's illegal advantage would have dissappeared earlier, leaving Hill to finish 2nd in the WDC ahead of the German.

Clearly, Benetton were cheating their way to the WDC...and when Schumacher speared into Hill at Adelaide, i'm quite sure Senna would have been up the road and ahead of them at that time.

The dynamics would have been changed, though, meaning Schumacher wouldn't have found the need to hit Hill after dumping it into the wall.

Schumacher ought really to have tied the title up long before Adelaide, in truth. The margin over Hill in reality was greater than the championship standings would suggest.

Valued Member
In the two races Senna survived in 1994, these were the Championship points: 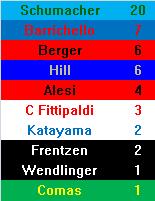 Now, I know what happened, but we have every reason to believe he may not have finished all the races.

Contributor
No-one has won two titles with Williams, Senna would have been no different. One bad season and he would have been thrown away. I think he could have won in 96, but Schumi would then veto any move by Senna to come to Ferrari and he would just be an old man who is unlikely to cling on in lower teams.

Balls.Senna would have creamed Schumacher in 94 plus he was already in negotiations to go to Ferrari.Whether he could have moulded it into the team that Schumacher did is up for debate.Personally,I don't think he would have his temper would have got the better of him.

As for WDC's,at least another 3.

tooncheese said:
but Schumi would then veto any move by Senna to come to Ferrari
Click to expand

Schumi wouldn't have moved to Ferrari if he hadn't been so dominant in the sport.

Contributor
If Senna had lived, he would be retired by now; done his autobiography, including an entire chapter on the 'whipper snapper' Schumacher; extended his charitable foundation and become a Godly, elder statesman of FI - appearing occasionally from his retreat to pass opinion on the current state of FI.

It was for money £$ nothing else.Stop kidding yourselves.

I f Senna had being getting his ass whupped by a kid he would have walked away IMHO.

Contributor
That's what Schumacher did when Alonso came along. Then Hamilton came along, but Alonso is still here. Props to Alonso and further props to Schumacher for then coming back and getting whupped by loads of kids. All the top drivers are going to get whipped by kids sooner or later. There is always someone better coming along. You can only ever be the best of your generation.

When I competed in BMX I was at the top of my game. If I were to go back to the sport on my A-game from time gone by, I wouldn't even qualify.

I don't believe Senna would have won in 94. In Schumacher's hands the B194 was a good car. It was built for his driving style, so much that Herbert, Lehto & Verstappen found it a very difficult car to drive. As has been pointed out, Schumacher would never have pulled the Silverstone stunt on Senna, wouldn't have been banned for 3 races, and would most likely have wrapped up the title before Adelaide.

Regarding Ray's observations on the legality of the B194, TC was never found on it by the FIA. Option 13 related to launch control, which Ross Brawn apparently proved could not be activated. I recall in Autosport from after Imola that the FIA requested source code from the first 3 finishers, but had difficulty obtaining code from Benetton & McLaren (Ferrari it seems were more obliging, although the finger of suspicion regarding TC had already been pointed their way). When Ford Electronics relented and supplied the source code along with McLaren, both were found to have potentially illegal software, option 13 on the Benetton, and a fully automatic upchange on the McLaren. Benetton were stitched up over the black flag at Silverstone, where the FIA ran roughshod over their own rules in a bid to reign Schumacher in and keep the season alive.

Ayrton may have had a chance in 95, as the Williams was pretty good. I think he stood a good chance of winning that one, then I think he may have called it a day. If he had stayed into 96 he probably would have won that one too. He may have ended up with 4 or 5 WDCs to his name.

"which Ross Brawn apparently proved could not be activated"

I'm sorry Dario,but that's BS.It could be used by using a sequence of buttons.

Irishgreen said:
"which Ross Brawn apparently proved could not be activated"

I'm sorry Dario,but that's BS.It could be used by using a sequence of buttons.
Click to expand

No BS here. If that was the case Benetton would have been kicked out. It's funny the one event that most people quote as proof of launch control is Magny Cours. As the code had been picked apart and option 13 found, they would have had to be might dumb to use it subsequently if it was operational. Option 13 was hidden in the menu rather than removed to avoid compromising the software. The '94 cars were well down the development road before some of these gadgets were outlawed. I read somewhere (I think Autosport again) a quote that "there were a lot of cars with a lot of illegal devices". The B194 was as legal as any other car out there.

Are you including Senna's car????

Valued Member
Another ending to the sentence "if Senna had lived..." is that Roland Ratzenburger's death was "driver error" and a "rookie mistake" and someone would have died in the subsequent 16 years.

And, please don't get caught up in the Senna as God storyline. Schumacher, sooner or later, would have taken his crown.

@TB
I don't believe Senna was god.But in my humble opinion he was the greatest driver god ever put on this planet.
As for Schumacher "taking his crown" not for many,many years in my opinion.

But then,what do I know.