The penultimate Race of the season is upon us, at 1 of the greatest circuits on the calendar got a brilliant atmosphere with the stands so close to track, circuit right in the middle of the neighbourhood, very enjoyable track with elevation changes, such great history synonymous with carlos pace who the circuit was renamed after to honor him in 1985 after his death in 1977 after but of course Ayrton senna the greatest Brazilian driver of all time & a driver who transcended F1 became a global icon & its all to play for nothing to play for

interlagos itself comes from the fact that it is located in a region between two large artificial lakes being the english name of between the lakes, which were built in the beginning of the 20th century to supply the city of sao paulo with water & electricity. funnily the circuit has the great depression to thank for existing because appartantly The land was originally bought in 1926 by property developers but because of the 1929 stock market crash & great depression that followed, the housing was shelved & it decided to build a racing circuit instead, 9 years later construction began on circuit inspired by Indianapolis & Brooklands. it wouldnt be til 1956 that it was 1st properally raced on with a endurance race. F1 wouldnt arrive until 1972 on the then 8km circuit albeit in a non-championship pretence as a test to convince the FIA that its organizers could successively organise a GP 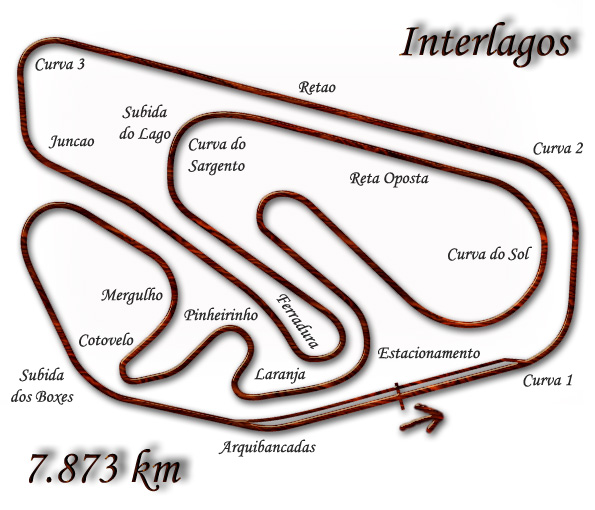 although we would only race there 7 times. because the 8km layout was very unpopular with drivers, with complaints of bumpy track surface and the inadequate barriers, deep ditches, and embankments, to such an extent the final race in 1980 very nearly cancelled after driver protests. which lead to spending the next Decade at Jacarepaguá. but after 10 years & a 15 million revamp + the hometown of at the time Senna who risen to god like status. we rejoined the modern circuit that we know today 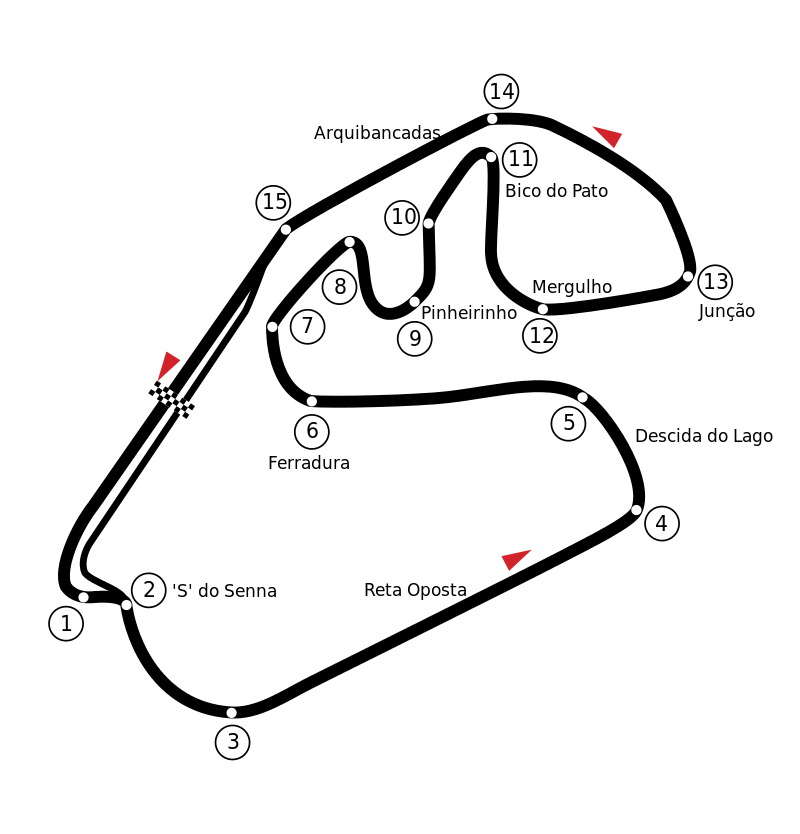 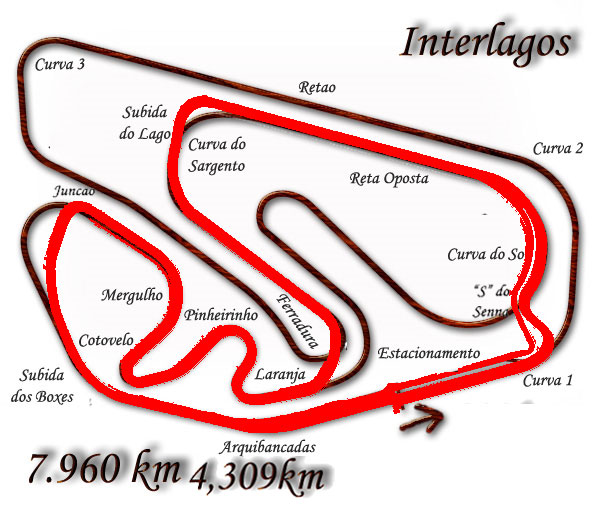 1 thing you can usually guarantee there is always action & rarely a dull grand prix espically now it has been moved towards the season finale back in 2004. who could forget
Senna victory 1991, when he only had 6th gear & exhausted on the podium
Barrichello in 1999, who looked on course for brilliant underdog victory as he took the leading from ailing mclarens & pulling away from schumacher. until engine gave way heartbreakingly
2001 - when Montoya burst on the scene & was overtook schumacher brilliantly, had the race in the bag but then a controversial moment involving verstappen (surely not

) as he was trying to lap him Montoya was taken out of the race & forced to retire
2003 - the race where the monsoon came down & turn 3 became a car park due to aquaplaning, a confusing finish where nobody knew how to interpret the rules following a late crash (thankfully we learnt from our lessons

) which meant nobody was stood in correct position on podium & fisichella got the trophy 2 weeks later in imola
2006 - season finale where Alonso became the youngest double champion, &schumacher incredible drive through the field in his final race for ferrari
2007 - when Kimi Raikkonen pulled off the most incredible comeback having being 17 pts behind with 20pts available
2008 - the greatest finish to a F1 season there ever has been, Massa winning his home race & being world champion for 30 seconds. until "is that glock"
2009 - Button brilliant drive through the field from 14th after wet qualifying to finish 5th & clinch his only world title, incredible fairytale season & sing iconic "we are the champions"
2012 - which was voted the greatest race of the decade, with championship between vettel & alonso on a knifeedge & remembered for being the race, hulkenburg shouldve won in his force india
2016 - another epic wet race & verstappen incredible wet weather drive where he went from 14th to 3rd in 10 laps
2018 - where Verstappen looked on course for comfortable win when tables turned & Ocon who was being lapped made a stupid move took out the race leader. let to some very aggressive scenes in weighing area
2019 - a race that had absoultely mad final 5 laps where Hamilton took out albon who couldve won, then Gasly outdragging Hamilton to the line for 2nd & Sainz getting the joy of his 1st podium following a post race penalty for Hamilton
2021 - the greatest drive of his career potenially as he was disqualified for DRS infraction from qualifying. went from 20th to 5th in 24 lap sprint race & then after 5 place grid penalty. came from 10th to 1st. to win & keep his title hopes alive
Last edited: 9 November 2022
Click to expand 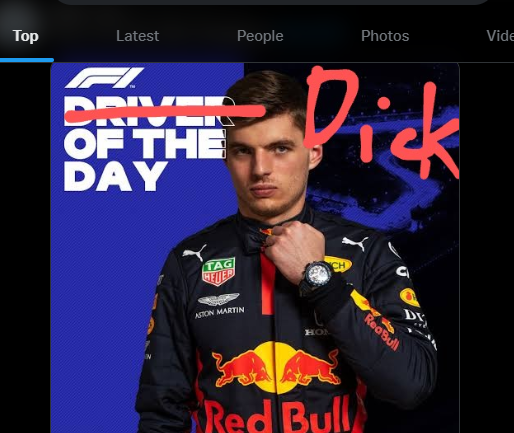 Has Verstappens 5 second penalty been added ?

Verstappen's actions might just have his fan base imploding

He served it in the pitstop.

I've not heard the interview but Max's response apparently suggesting he knew the gap between him and Hamilton was disappearing and he decided to keep his foot on it ... make what you will of that but any other driver he would not have gone for

It sounds like he will do anything to stop Hamilton winning

where to start with that race, brazil always delivers the best racing. over the moon for George, he's struggled recently in races but he's found something this weekend as that was brilliant victory under great pressure & like watching him in F2 & in sakhir when fate cruelly took the race away from him, as he built the gap & withstood Lewis who determined to retain his record which is gone now during the late safety car & who wouldve thought it would be him that would have the honour of being the 1st driver to have "god save the king"

Hamilton / Verstappen what is it about them as they only seem to crash with each other. i dont know whether its a backhanded compliment that they rate each other so much they cant give an inch that they do to other driver as they believe to be "superior". Brundle made a good point that Verstappen entitled to some more room. but i would say Verstappen was lacking racecraft for me because he shouldve backed out like Russell did yesterday & go around outside of Turn 3. it was eearly similar to ocon incident in 2017. but i think stewards where wrong to penalise him because he had already punished himself & it was 50/50

Riccardio i dont know what to say. normally you can find something positive & try to see both sides but that was just terrible & so weird as he looked like he recovered & then went for 2nd bite & hit Magnussen

but alonso was fantastic 17th & disaster of yesterday what a drive to 5th i have issue with seat blockers in F1 you have to wonder if they are getting rid of the wrong driver at alpine. albeit they had no choice as it was huge cock up as alonso at 40? is driving very well. give him the right car he could win a race
Last edited: 13 November 2022

that with Verstappen was shocking, i think the worst part of it is that it was for 6th he wouldnt give up 6th when nothing matters. he just burned all the bridges he's had with perez next year as well for nothing or settle some petty argument

i will defend verstappen to a point because i would be pointing fingers at red bull & christian horner. because what happens with culture over there because this is dejavu as when vettel v webber in malaysia all over again, when he was told to hold position & disobeyed the order, then when quizzed about it he wasnt even sorry just pure arrogance because he thought he was bigger than the team & untouchable. this is feels the same

this is dutch tvs response, which i will take with a large pinch of salt, as i think its more he doesnt like taking orders & if your going to crash deliberately your going to do a schumacher. not put it in the barrier taking off our rear wing, potential damage to gearbox & getting T boned in a blind corner 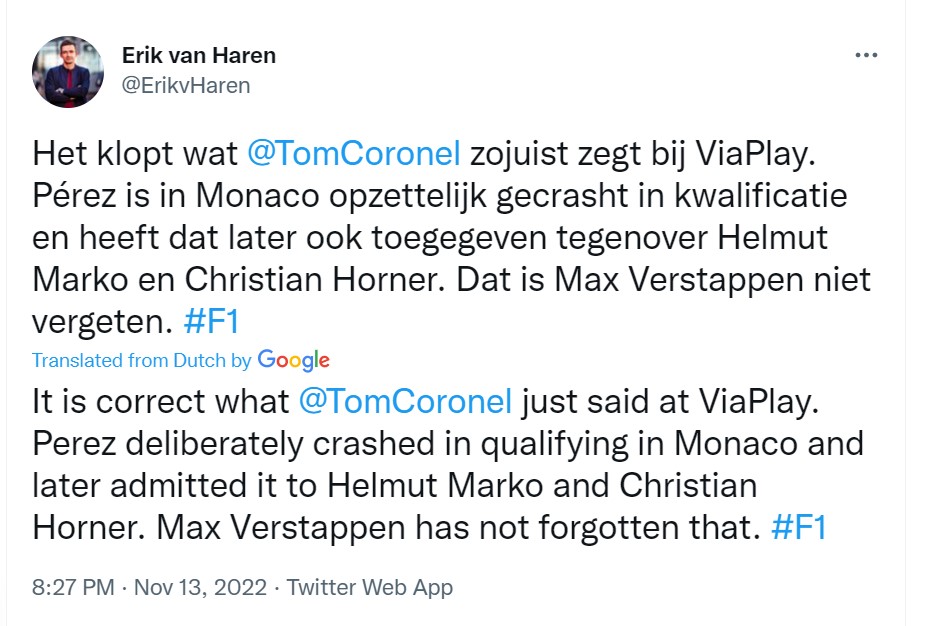 Il_leone said:
I've not heard the interview but Max's response apparently suggesting he knew the gap between him and Hamilton was disappearing and he decided to keep his foot on it ... make what you will of that but any other driver he would not have gone for

Max said he knew they were coming together, but didn't care. It cost Lewis a win, and he didn't have the car to get to the podium anyway... That is why I think the stewards were right to punish him.

Whatever the reason, it's childish. He sounds like a spoiled brat.
Sergio helped him on other occasions, last year as well as this.
Ex Max fan here since last night... 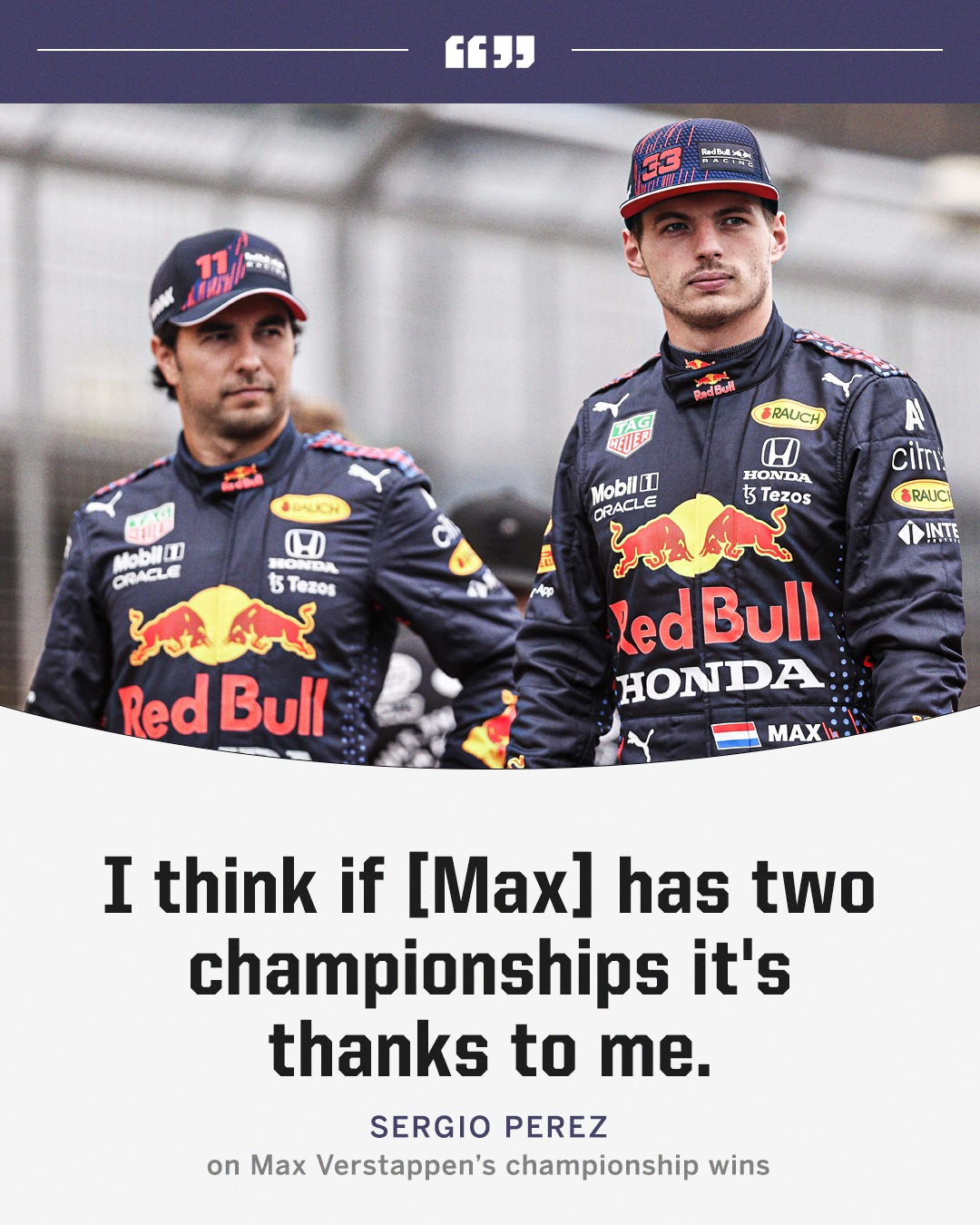 Max is upset with anyone who is in front of him, the unwritten Max rule, I am entitled to be in front, I'm the best, my dad said so.

Valued Member
I think Perez is over egging his involvement in the race wins and championships Max has had in the last two years, unless he's been deliberately driving slowly.

But he did not do disobey team.orders but just as ruthless but certainly would not stab his team in the back to prove his point

Il_leone said:
But he did not do disobey team.orders but just as ruthless but certainly would not stab his team in the back to prove his point
Click to expand

Staff Member
The FIA should look into the comments from Verstappen related to his clearly deliberate ramming into Hamilton.

To be honest I went around the outside and I immediately felt he was not going to leave space, so I just went for it.

He didn’t leave me space so I knew we were going to get together.

It cost him the race win, for me it gave me five seconds.

It wouldn’t have mattered anything for my race because we were just way too slow.
Click to expand

They won't, but they should.

Staff Member
Verstappen should watch this for what to do when attempting to overtake at T1/T2 in Brazil.

Hamilton clearly knew he wouldn't be able to put it up the inside and make the move stick, so he waited a lap and did it cleanly.

Brogan said:
This race was Hamilton's best chance of preserving his win every season record.

Even though Hamilton was one of my Teams main rivals a few years ago I'm still kinda sad to this record go away. Maybe we will get a story book ending with Hamilton winning the last race with Verstappen no where near the front. One can hope.


Brogan said:
Perez is a fool if he thought Verstappen was ever going to help him out in any way.
Click to expand

I feel bad for Perez. I don't think he crashed on purpose in Monaco, the spin looked real. Verstappen and his dad are just whiners. After everything Checo did to help his teammate last year this is how he gets repaid. Sad. Verstappen as team player absolutely sucks and his move on Hamilton was never on. He even admitted to doing it on purpose, so that should be at least a 5 place grid penalty for the last race. I'm sick of him and Red Bull for not being able to manage their own driver. I hope Perez will cause problems for them going forward in regards to staying in front of Max whenever he can.