Contributor
Ok I got my holiday dates mixed up somehow and I wrote the official Germany quiz way earlier than I needed to because I thought I was on holiday and I wasn't ...so...anyway here is a bonus quiz. and here is the link to the official quiz. LINK.


Going for GOLD.
The heat is on. The time is right.
Its time for you, for you to play your game.
People are coming, everyones trying.
Trying to be the best that they can.
When they're going for going for GOLD.

Welcome contestants. I will read a series of clues the quicker you buzz in the more points you will receive. Work your way down the List. If you think you know the answer and want to risk hitting the Buzzer for big points, Be aware just one wrong answer and you will be frozen out until the next question.

So if you're ready.. fingers on buzzers. 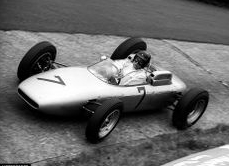 Contestant 1 has buzzed in. Lets see if they are right.
Answer : The Porsche 804

I raced karts, Formula Ford and GM Euro series, German F3, Sports cars and F3000 before F1
I was second in The German F3 championship in 1989 behind Karl Wendlinger but in front of Michael Schumacher
I got my first F1 race with Sauber in 1994
I replaced Damon Hill at Williams in 1997
I won in Imola 1997
I raced for Jordan in 1999
I won for Jordan at Magny-Cours and Monza
I've also raced for Prost, Arrows and again for Sauber in 2003
158 GP, 3 wins, 2nd in championship 1997
Contestant 1 has buzzed in. Lets see if they are right.
Answer : Heinz-Harald Frentzen

Final Question. The German Grand Prix, but what year ?

Webber clashed wheels in the first corner with Rubens
For which he got a penalty
Hamilton picked up a punture after contact in the first corner
Bourdais retired with hydrolic issues, his final race at Torro Tosso
Sutil's Force India hit Raikkonen as he emerged from the pits
Nico Rosberg just missed out on a podium in his Williams Toyota
Timo Glock brought his Toyota home in 9th
Jenson's Brawn finished 5th
Vettel finished 2nd
Webber claimed his maiden win
Contestant 1 has buzzed in. Lets see if they are right.
Answer : 2009 German Grand Prix (Nurburgring)

Again, wouldn't have got the Q1 answer in a million years.

I agree with teabagyokel on question 1.

Nothing for Q1 either.

Valued Member
I guessed at q1 for 10 points. I said Sebastian Vettel.

16, Q1 was actually impossible, played it safe for 6 with Q2, went all out for Q3, gambles pay dividends!