Contributor
So F1 has returned to our lives again for the 2015 season, the second year of the new V6 regulations. Once again, I will be running the CTA Race of the Year competition, tallying up the results from the "out of ten" polls made after every race. I've decided to simplify things this year - there won't be a most disputed race competition and I'm just going to use the plain old mean to award the scores for race of the year. So there's only one number that matters in the tables now!

As the poll from Australia still has some votes trickling in thanks to its prominence on the front page, I will delay announcing the results from that until next weekend (just before the Malaysian grand prix). In the mean time, though, let's have a look at the history of CTA race of the year!

2011: Japanese Grand Prix, 7.3 out of 10. The out of 10 polls only started towards the end of 2011, by which time Vettel's dominance of the season was set in stone. In fact, the Japanese grand prix was where he won his 2nd championship. It was Jenson who won this one, though, in another race that epitomised Hamilton's difficult season after another clash with Massa. My memory isn't good enough to remember much more about the race...

2012: Brazilian Grand Prix, 9.1 out of 10: A classic end to an F1 season. Vettel had a much better car but Alonso had somehow dragged his Ferrari to places it didn't belong during the year and was still in contention for the championship in the final race at Brazil. What followed was instant drama, with rain in the air and Vettel coming together with Bruno Senna on the first lap, which left Alonso with a great chance of stealing the title. Vettel fought his way back to 4th through the rain, though, and won his 3rd title. Meanwhile, Hamilton looked on course to win his last race for McLaren before a coming together with Hulkenberg, and Schumacher completed his last ever F1 race.

2013: Hungarian Grand Prix, 7.8 out of 10: With the second half of the season completely dominated by Vettel, there were not many particularly good races in 2013. Hungary was the last point in the season where there was any hope someone else could win the championship, with Hamilton taking his first of what will certainly be many wins for Mercedes. He had to complete a few critical overtakes to get the win, whilst Vettel was left frustrated following other drivers and not able to pass. Grosjean pulled off one of the best overtakes I've ever seen, only for it to be ruled as illegal as he marginally went outside the track limits.

2014: Hungarian Grand Prix, 9.3 out of 10: Hungary again, surely not? The 2014 race in Budapest brought rain to the party to spice things up in one of the 3 races won by Ricciardo. Rosberg built up a big gap in the early stages, only for it to be taken from him by a safety car, causing him to fall back a few places and giving the flawless Ricciardo his victory. Hamilton, meanwhile, started from the pit lane in qualifying but nevertheless managed to fight his way through the field and somehow even finish ahead of Rosberg, thanks to some robust defending towards the end (which left Rosberg with a sense of injustice that lead to the incident at Spa).

All of these races were crap, so I'm not going to bother to describe them!

All the Races Rated by CTA:

There are some caveats here. 2012 comes out as the best year but I could not include Monaco due to the format of that poll. Monaco 2012 would have been a contender for the worst race of that year, if not overall, so if it was included it's very likely that 2014 would come out on top. 2011 is only the last 6 races of the season.

I will update this thread through the season with the results for 2015. Who will take the title? Can Hungary take it for the 3rd year running? Will Russia avoid the wooden spoon? We'll have to wait and see...

If Valencia 2011 was polled, it would have gone into the 3's for sure.

Another thing to notice: A lot of the bottom 15 are Vettel wins
Last edited: 21 March 2015

Staff Member
Premium Contributor
Some really interesting data sets. I think it's clear to see that the top races are won by a the less dominent drivers in a season while the bottom, less popular races are won by the in form drivers. Hence we see lots of Vettel and some Hamilton 2014. I don't think it's so much to do with driver popularity but to do with winning predictability. It will be interesting to see how this year develops on that basis.
Last edited: 22 March 2015

Contributor
Here's the result from Australia - 5 out of 10. The previous 3 years have had scores of at least 7 out of 10 in Australia, so it's by far the worst start to the season since we've started doing these polls on CTA. 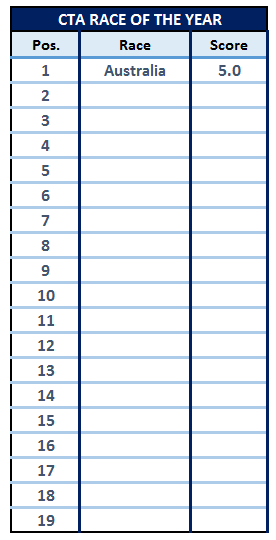 Contributor
But Australia is in the lead though..

Contributor
Not for long, hopefully.

Staff Member
Premium Contributor
Let's not forget that this years figures may be affected by the new profile position for polls. While the sample should be far more accurate of opinion it will also be unlikely to match the trends of previous years. The affect on the average score won't be harmed by the "auto 10" brigade with over 80 people voting, for example.
M

Contributor
Mephistopheles Your unwavering sense of optimism never ceases to amaze me... ahem.

Contributor
I think you will remember that I did not give every race a 10.
Nice to be a Brigadier though, far exceeds any rank I ever held.

Contributor
Well you're right, there will be an effect. I just think it will be small.

All those top races are ones that Vettel didn't win

Valued Member
I wonder if he can improve his best win's position this weekend?

Contributor
It's looking like it will be close to 8 out of 10 so yes, he probably will.

Staff Member
Premium Contributor
It's quite funny that the first serious candidate for over all race of the year is due mainly to the fact that it wasn't won by a Mercedes.

The audible sigh of relief travelled twice around the globe and measured 3.5 on the Richter Scale in Brackley.

Contributor
7 of the top 10 races are from 2012. That surprises me. I guess thats clearly the front runner in 'best rated season' if thats being looked at.

Edit - although I've just noticed it has the worse race too!
Last edited: 30 March 2015

I have average scores for each year in the original post, 2012 does come out on top but it doesn't include Monaco as that poll had all sorts of weird options. Monaco 2012 was dull so if that was included 2014 it's likely it would have beaten 2012. 2013 and 2011 were heavily dominated by Vettel so lag behind and there were no polls before 2011.
Last edited: 30 March 2015