With no deal in place for 2020 this could well be the last British Grand Prix to be held at Silverstone for the foreseeable future. News stories out today suggest Liberty is now actively pursuing a London Street race to replace Silverstone for next year. This is just criminal in my opinion, the removal of good race tracks in place of street tracks and all for the purpose of money is just driving F1 into oblivion. Lets see how this one develops. Hopefully it is just a negotiating tactic by Liberty.

Strange one for me this race, I have lots of happy memories of visits and I love watching the coverage of what I truly think is one of the best tracks on the calendar. Yet actually visiting Silverstone is a mixed bag, yes the race is good, great views over a large percentage of the track, but the facilities particuarly for campers have always been under invested and a poor experience. In someways I can see why Liberty want to give them a kick up the ass just as Bernie did several times over the years.

I've been to Silverstone 5 times over the years but after the mud baths in 2011 and 2012 I swore I wasn't going back unless they put proper roads in the camp sites. They still haven't. I guess it's all irrelevant now, if the F1 circus is heading to London in the future it really will be a sport only for the rich as you will not only have the ticket cost but London hotel prices to add in as well. For old time sake I have added a link to my 2012 post below, lots of nice photos and a diary. GL's Silverstone Diary

On a lighter note.

What can we expect from this weekend? Well free live race coverage YAY. It's the only CH4 race to be shown in full and live for every session this year. Also if you love seeing Mercedes win, and who doesn't, I suspect that Mercedes will be back on top as they have always done well here in recent years with the exception of last year as Lewis ended up at the back after a first lap collision. Indeed Mercedes have won 5 out of the last 6 races here and Lewis has won 4 out of the last 5. Ferrari may need a bit of luck as they had last year if they are to win again. 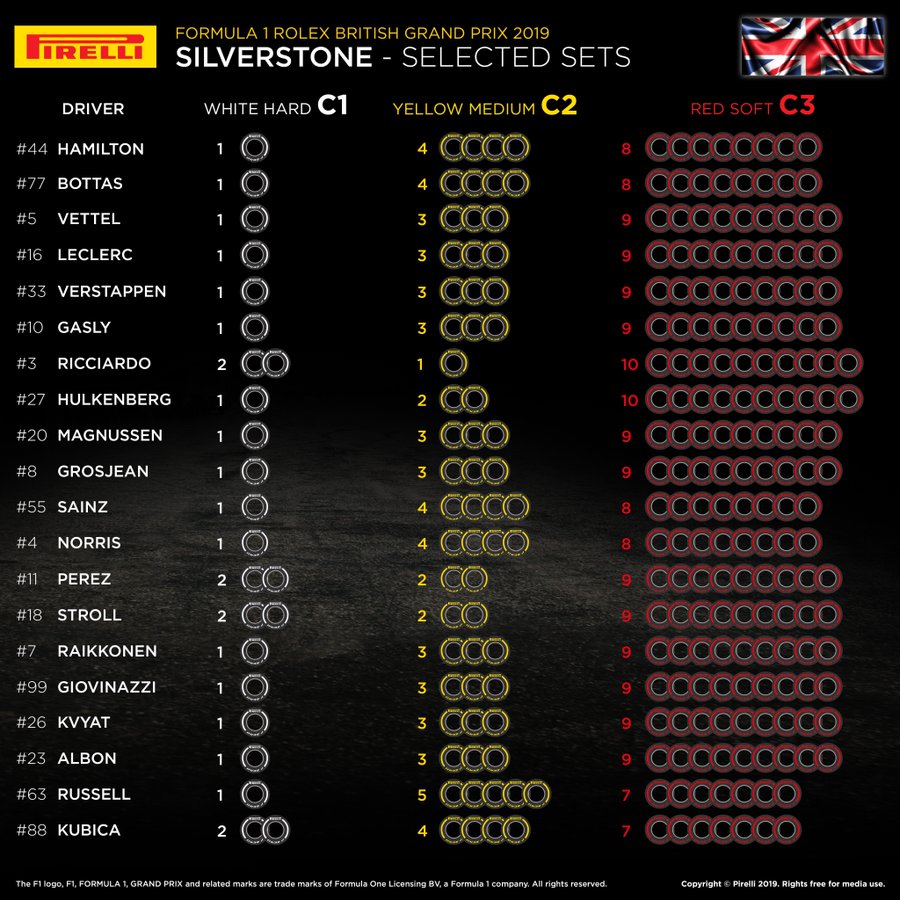 Contributor
Is it me or is it going to be the 'last race at Silverstone ever' nearly every time we come here? Good luck on finishing a London street circuit! As Formula E found out, local residence not too keen.

As much as I enjoyed the last race I can't see any other result than Lewis winning by a country mile in this one.

Greenlantern101 said:
the removal of good race tracks in place of street tracks and all for the purpose of money is just driving F1 into oblivion.
Click to expand

nice write & liked looking at your diary. ive said before that I unfortunately british gp will take a sabbatical in 2020. come back in 2021 at Silverstone, as been said before good luck so many people have try at London gp & if formula e a quiet environmentally friendly series in a park so they didn't have to close any roads. angered the residents so much. good luck letting a F1 car in there

Contributor
I wonder if Donnington could host a British GP if Silverstone has a forced year out and London says no.

Contributor
Good write up and I loved reading of your experience Greenlantern101, Thanks for sharing that again. Oh the mud and the rain and the vehicle that looked like a bit like a tank

According to the weather I've seen so far it should be about 23C and mostly sunny and dry. Yes Mercedes look like they should win it easily, but this is F1 and as good old Murray often used to tell us, 'anything can and probably will happen'. We have to believe that or there would be no point in watching it

Greenlantern101 said:
I wonder if Donnington could host a British GP if Silverstone has a forced year out and London says no.
Click to expand

why not i can't remember anything bad happening last time

Contributor
Donington is a good track but facilities would need improving. I'm a for it though as it's 30 mins drive from my house.

RasputinLives said:
Donington is a good track but facilities would need improving. I'm a for it though as it's 30 mins drive from my house.
Click to expand

Not on race day.

your not wrong, i remember the BTCC queue was over an hr to get in (that was VIP). hour to get there & hour to queue. then going out there was a mile long queue

Staff Member
Premium Contributor
It would never happen but I'd love to see racing back at Brands Hatch.

As for facilities, sod em. They waste too much money on all that garbage they lug around the world anyway.

A couple of caravans and a gazebo should be all the teams are allowed. That would save millions right there.

Staff Member
Premium Contributor
If that's a criteria for hosting a British GP, I look forward to Exeter's application.

Contributor
Yeah but East Mids is better as it has one boarding gate for Ferrari team members and another for all other F1 staff.

Seriously, who would want to go to Luton? The only good thing about the place are the roads that lead out of it!