And so, the F1 Circus returns to its traditional European opener in the outskirts of Barcelona for the 48th running of the Gran Prix de Espana, with 25 editions having previously been held at the Circuit de Catalunya. The track has remained relatively unchanged, barring the addition of a chicane before its speedy final turn in 2007, and is home to one of the sports most iconic images as Nigel Mansell and Ayrton Senna battled just inches from each other down the pit straight during the inaugural race there. More recently it was the scene of the magically bizarre saga of Williams ending its victory drought in 2012 only to have their garage erupt into an electrical fire shortly after the champagne was popped.

Mercedes remains the dominant force in Formula One with Nico Rosberg riding high and putting himself in legendary territory on his current win-streak. The tides have well and truly turned since the Austin meeting last year and the man seems destined to follow in his father's footsteps once again in his quest to capture the World Driver's Championship. Several other outfits have reason to be pleased as the cars return to base. Haas (Grosjean) overcame a dismal showing in Shanghai to once again find their way solidly into the points. Renault have shown themselves capable of putting points on the board as well, and McLaren finally seem poised to make themselves relevant again.

Others may not be so thrilled with recent developments. Although Kimi Raikkonen found his way onto the podium in daylight for the first time since 2013, Ferrari seemed closer than ever in China, only to be further back from the Silver Arrows again in Russia. Sauber continue to look hopeless and it's hard to see how morale is going to pick up in that camp anytime soon. Esteban Gutierrez again showed himself to be unfit for the position of Grand Prix driver. And its hard to ignore the trials and tribulations of Car 44.

Will we finally see a Lewis Hamilton resurgence in Spain? There's a long haul to go in 2016 yet, with this race marking the (nearly) quarter-mark in the campaign. One has to believe that things will come good for Lewis at some point and though his opening four races have been messy, 57 points is a respectable tally considering the dramas involved. Barcelona is by no-means a Hamilton favorite, although he has managed 5 podiums with a win in 2014. At the very least, he'll be hoping to have a clean weekend with regards to reliability.

Truth be told, Formula One could use a non-Merc victory, and this track has given us 9 different winners in the past 9 years, so who knows? Why not watch and see? 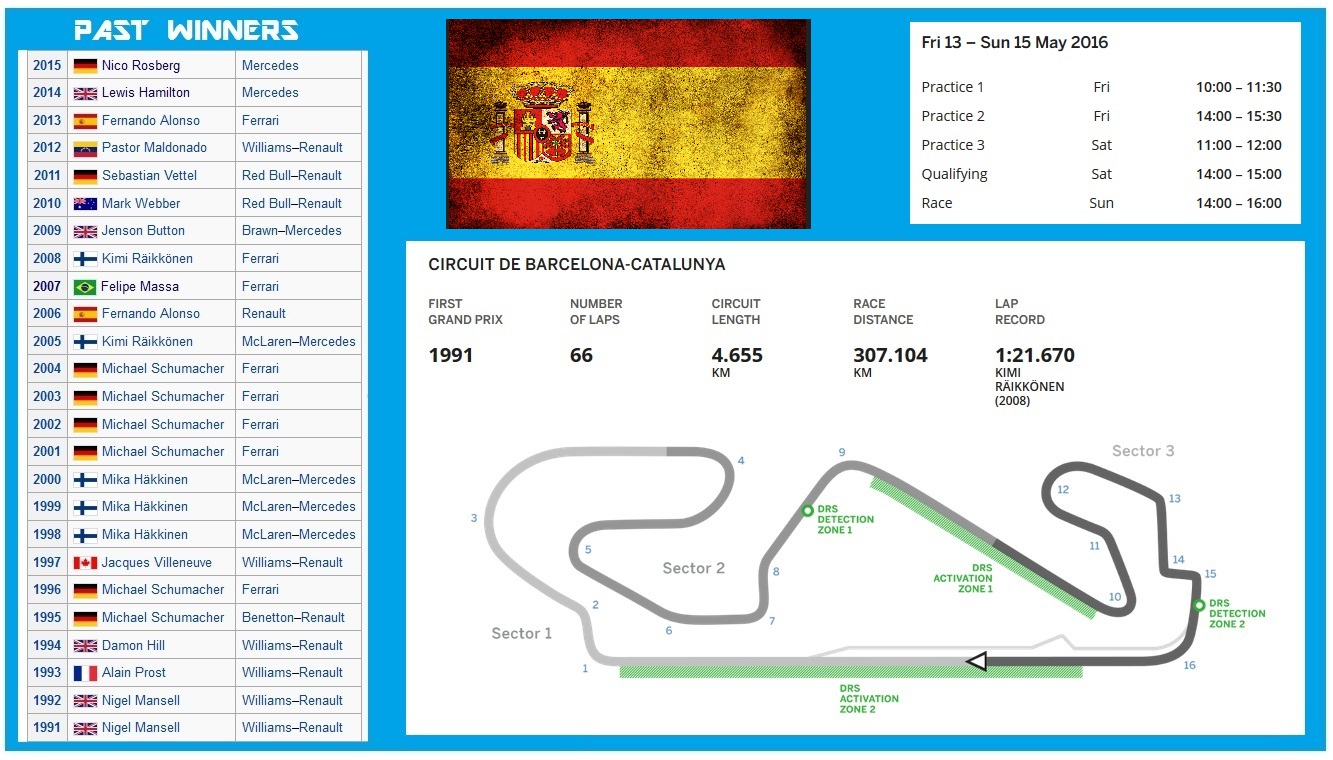 Contributor
Not only did Kimi find his way onto the podium, but he actually talked in paragraphs rather than in-monosyllables.
Last edited: 2 May 2016

Valued Member
The relative performances of Ferrari/Mercedes and Red Bull/Williams from Barcelona to Sochi will tell us a lot about how powerful the engine is compared to chassis performance. Sochi has always been an engine circuit, Barcelona is the big high-speed corners circuit of the year.

I've given up pretending to know what will happen.

teabagyokel said:
Barcelona is the big high-speed corners circuit of the year.
Click to expand

Just goes to show how far they've gone when it comes to neutering what made historical circuits great in the first place over the past 25 yeas or so.
When Barcelona was inaugurated in F1 in 1991 when asked what he thought about the track G Berger said "It's OK but there aren't any fast high-speeed bends.". And that was when they still had the double right-hander opening onto the straight...

Then again back then they had the old Silverstone, the Peralta, the fast esses at Montreal, Signes, not to mention the Osterreighring and Dijon's Pouhas curve just a few years previously...

the definition of fast bends has certainly changed a lot this past generation. The heart-in-your-mouth corners have well and truly gone....

Contributor
Barca's produced a few tame-ish races recently, but I love it because I go every year, this will be the fourth on the trot. Trackside of course means you have no idea who's on what tyres, what pit-stop strategies etc, so I'll watch it again in more detail when I get home. The trackside FM radio has rarely worked in my experience, and I can't be bothered to have my head in my phone for all the latest info all afternoon. Much rather get battered in the sun with my mates

It's one of those circuits that seems to have produced better races in the last few years. It used to be one of my least favourite circuits on the calendar but it all seems a bit random these days.

Contributor
Certainly will, it'll be a pleasure Greenlantern101. Seats are front row of Grandstand A on the inside of turn 2. The grandstand has large grassy space in front of it (our play area) and we should get a half-decent view of turn 1 as well. Last year we were on the inside of the track in Grandstand L between turns 2 and 3 which also has a big 'play area'. We didn't use our seats all Sunday, had the run of this huge grass space to loll about on, excellent, so hopefully the same again this year but with a better view of turn 1. I'll take some pics.

Looks like lots of medium tyres in this race. Ferrari and Haas going quite racy with lots of softs. We'll see the orange tyres in the Hamilton/AUS or Kvyat/RUS extreme circumstances. Teams with 2 oranges will be testing them.

Contributor
I have to say I've always viewed Spain as a boring entrance point to the European season. Something you have to get through like a doctors waiting room.

However this year I'm quite looking forward to the weekend. The races have been getting better here, it will be the first time we'll really see where the cars stand in comparison to each other and as an added bonus the GP2 and GP3 are back.

Valued Member
Where's a moderator when you need one...

Anyways back on topic. Kvyat needs a good drive in Spain or he's toast. What do you do in a situation like that? Play it safe or risk your neck?

Spain is a difficult place for a driver to make a difference. I expect a two by two team situation.

Staff Member
Premium Contributor
The moderator is trying to enjoy his first foreign holiday with his family for over a year.

Freddie is on topic because he says Barcelona a lot. Now play nice (for at least a few more days) and try to leave me out of it.

Contributor
I'm going to miss the qualifying on Saturday

Valued Member
You know full well that we will be looking at the Noah principal in qualifying Greenlantern101. I suppose the only question is which of the silver cars will be on pole.

Just to spice things up a bit in the midfield Force India are planning to bring significant upgrades for Spain. I wonder if they will be able to nudge closer to the Williams cars.

Contributor
Well massive wooden ark racing was one format they didn't put forward for the qualifying format FB who knows.

I would predict a Hamilton pole but no doubt he will start from the back of the grid when his engine turns to scrap metal again.
Last edited: 11 May 2016

KekeTheKing said:
Truth be told, Formula One could use a non-Merc victory, and this track has given us 9 different winners in the past 9 years, so who knows? Why not watch and see?
Click to expand

Will we see a tenth? That would mean Red Bull (Ricciardo or Verstappen) or Williams (Bottas) would have to win. (All other drivers for teams with a (remote) chance of finishing on the podium have won it in the past.)