After the excitement of Spain, with a new Grand Prix winner added to the list, we now move to the French Riviera for the jewel in F1's crown. It would appear that Ferrari's place as the next best team after Mercedes has been taken by Red Bull. I suspect we will see a reaction from the red team but do they have the capacity move back ahead?

Monaco hasn't been a happy hunting ground for Lewis Hamilton with only a single win back in his McLaren days. Nico Rosberg has won the last three races at what is, in truth, his home race. Sebastian Vettel has only won here once as well which shows what a lottery this race can sometimes be. Kimi Raikkonen hasn't won since 2005, also in a McLaren.

Mercedes will continue to be the class of the field but Monaco can be a great leveler where fractions of an inch can be the difference between winning and sitting in a pile of carbon fibre wondering what happened.

Max Verstappen must be on cloud nine, can he take this confidence in to the race around the principality? Daniel Ricciardo will have something to prove after his teenage teammate's achievement in Spain. The Toro Rosso boys will also have something to prove; Carlos Sainz that he deserves a drive in the senior team and Daniil Kvyat to show he should have kept in place at Red Bull.

I'm sure Force India will be hoping for some serious points, Williams will continue to be poor and will probably be even worse round the twists on Monaco. Haas will have their first experience of French sunshine, Renault will have something to prove at the closest thing to a home race for the French team. They could well be battling it out for the minor points places.

At the back Manor and Sauber will battle for the wooden spoon. Sauber look to be working hard to ensure they get this as they continue struggle financially. Manor, at least in Wehrlein's hands, hasn't look too bad given their budget. I wonder if Haryanto will have to ask for a special dispensation as he hasn't got within the 107% time.

Fun in the sun? Monaco is always more exciting in the wet, I wonder if we will see a sprinkling of rain just to spice things up?
Last edited: 16 May 2016
Click to expand

Contributor
I'm hoping we can beat last year's overtaking record and get to the heady heights of 11 overtakes.

This is the 1 grand prix I don't look forward to.

Please can we have rain.

Sorry Greenlantern101, I love it and look forward to it every year. All that history is wonderful. The worst part for me is the Indy 500 starts about 3 hours after Monaco finishes, for me on this side of the world that means no sleep.

Contributor
I love Monaco as well. I see it like a big ass action summer blockbuster. The content is probably not the best but boy does it look amazing.

I am home alone all Sunday of the race so for once I will sit down and watch the entire build up and aftermath as well as the race. Most likely with a bacon sandwich and a pint of homebrew.

I have a sneaky feeling for a Red Bull win on this one. 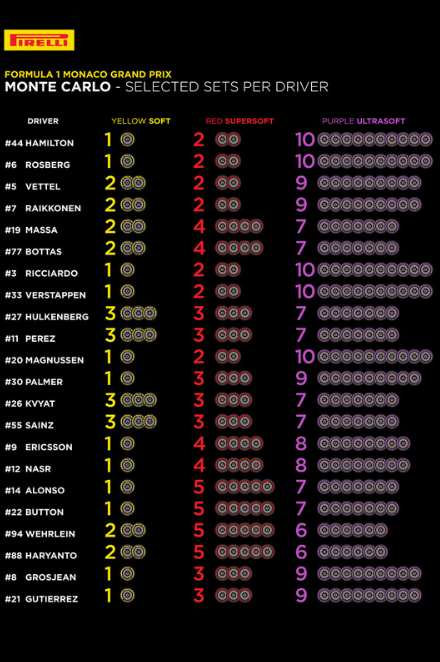 After what happened in Spain I think Mercedes bosses have advised their drivers; "yes, you can race each other ... until turn 1, then hold positions". It kinda feels like 89 all over again, doesn't it?

It seems Rosberg continues to be bookies favourite;

Let it be rain

Olivier said:
After what happened in Spain I think Mercedes bosses have advised their drivers; "yes, you can race each other ... until turn 1, then hold positions". It kinda feels like 89 all over again, doesn't it?
Click to expand

But that was the other wy around back then wasn't it? It was "You can race each other but only after Turn One".

Although to be fair given the personalities involved I doubt very much either Senna or Prost ever paid the slightest attention to whatever race instructions they were given during races...

Given the pace the cars have shown in previous races this year relative to 2015 we may well witness a new circuit record being set in qualifying this weekend. So far there has been a mean difference of 2.39% between the 2016 pole lap and 2015 pole lap. The median difference is even higher at 2.97%, and the largest difference has been 3.44% which was at Bahrain.
If this years pole lap is even 2.39% faster than last years then we could be looking at a pole lap in the region of 1:13.3, with the current circuit record being a 1:13.5 set in 2006 and all but matched in 2011. It's possible we could see a pole lap in the 1:12s.

I doubt the race is going to be anything particularly special but I am very much looking forward to seeing how fast the cars can go come qualifying.

The difference in qualifying should in fact be even greater than tat with them ultra-softs...

Valued Member
Someone needs to try putting softs on asap and running to the end. No-one is passing you.

Valued Member
2011. How often this race is lost by strategists who fail to recognise that there is no race.

Contributor
I'm seem to remember RayFromToronto had an opinion on that race back then about tyre wear. You might have missed it because he didn't talk about it much.

Yeah but you don't know what would have happened at that race had it not been prematurely stopped? Not Probably not have been an overtake for the lead but quite possibly a crash between the leaders instead.

Contributor
Possibly but Weren't Alonso's tyres in a worst state and Button right behind him on fresh. They'd prob have crashed into each other and let Vettel get away with it.

The 2011 grand Prix is my favourite circular argument of all time. I remember someone even blamed Petrov for ruining the race as he didn't get out of the car quick enough to show he wasn't hurt thus not triggering the red flag.

Valued Member
It was just one catastrophic crash away from Webber winning three Monaco GPs. Reckon he'd ever shut up about that?

Premium Contributor
Does it ever rain in Monaco?

Premium Contributor
Well lets hope it pours for the race then