Battle for the drivers championship recommenced in Monaco and next we are off to one of Lewis Hamilton's favourite and most productive races at the Circuit Gilles Villeneuve in Montreal. Only Michael Schumacher has won more races at this track than Lewis.

But wait, Red Bull are having a resurgence and back in 2014 Daniel Ricciardo recorded his maiden win. Only kidding, expect this to be a battle royal between the two Mercedes drivers for both pole and the race win. Lewis has exorcised some demons after Monaco and Nico looked to be back to the sort of form he had at the start of the 2015 season.

Red Bull are taking the fight to be "best of the rest" to Ferrari and with the upgraded Renault engine might even have gone past the Scuderia. Canada has not been a happy hunting ground for either Vettel or Raikkonen and it will be very interesting to see how the red cars stack up against the fizzy drink machines. What money on Max Verstappen have some sort of interaction with the Wall of Champions at least once during the weekend.

Williams must hope that Canada will better suit their cars than Monaco did. Force India are pushing them to be next best after the big three and will be boosted by Sergio Perez's podium in the principality. Toro Rosso can certainly mix it with Williams and Force India but last years Ferrari engine might not have quite enough puff to allow them to keep up on the faster sections.

McLaren look to be getting some form back with both cars scoring points in Monaco. Haas and Renault will be next up. Jolyon Palmer will have to get a wiggle on or I suspect he might well be out of a driver at some point in the near future.

Last, and probably least, Sauber and Manor will be at the back. After the fun between the two Sauber drivers in Monte Carlo I expect them to be a little more circumspect in Canada. Over at Manor, Pascal Wehrlein needs to up his game against Rio Haryanto if he wants a better drive for next year.

Canada often gives us a fun race, I wonder what we will get this year?
Click to expand

Contributor
I have to say I always get excited about Canada races but the last couple have been a little dull.

Can't see. Past a Lewis win on this one with him being mighty on this track and the Merc being just as mighty engine wise. However Rosberg had brake issues in Monaco and Canada is a killer on brakes so maybe that might spice things up.

I think the Red Bull resurgence might be stopped in its tracks (at least for one race) but I think a cheeky pint on another Perez podium might be worth a shout.

Valued Member
Williams will probably be in the mix for best-of-rest at a circuit like Montreal, too.

Staff Member
Premium Contributor
They need to do something. Their season has been poor so far.

Contributor
Tyre selections are interesting. Both Renault and Haas have decided not take any of the Supersoft compound. Instead they've opted for 3 sets of the softs and 10 sets of the ultrasoft. Most other teams have gone mostly ultrasoft but have taken at least 2 sets of the other compounds on offer.

Not sure if that is a brave move from Haas and Renault or daft thinking.

Premium Contributor
If Max Verstappen hits "The Wall", I would think his days in the big team, might become numbered.

Valued Member
Looks like a clear split of ultras for quality and softs for decent race stints.

Valued Member
Montreal is terrific. Back to earth for Red Bull, though I wouldn't be surprised if they're ahead of Williams. I will if they're quicker than Ferrari...

As for the title, my guess is that Hamilton will be championship leader leaving Silverstone and ease away comfortably from there.

Galahad said:
Montreal is terrific. Back to earth for Red Bull,
Click to expand

I don't know... traction is also crucial in Montreal, and judging by the way Verstappen was gaining on Raikkonen every time they exited the chicane before the main straight in Barcelonathey could yet be quite strong in Canada too.

Plus it'll be a good opportunity to gauge how that upgraded Renault unit is doing on the long straights. We might yet get a little surprise on that front?

I hope we do. I've been wrong before, many times. But, I just can't see it. I think Mercedes have a little more left up their sleeve in the engine/power unit stakes than they've shown to their rivals.

Contributor
Renault and Haas not bothering with the supersofts for Canada: 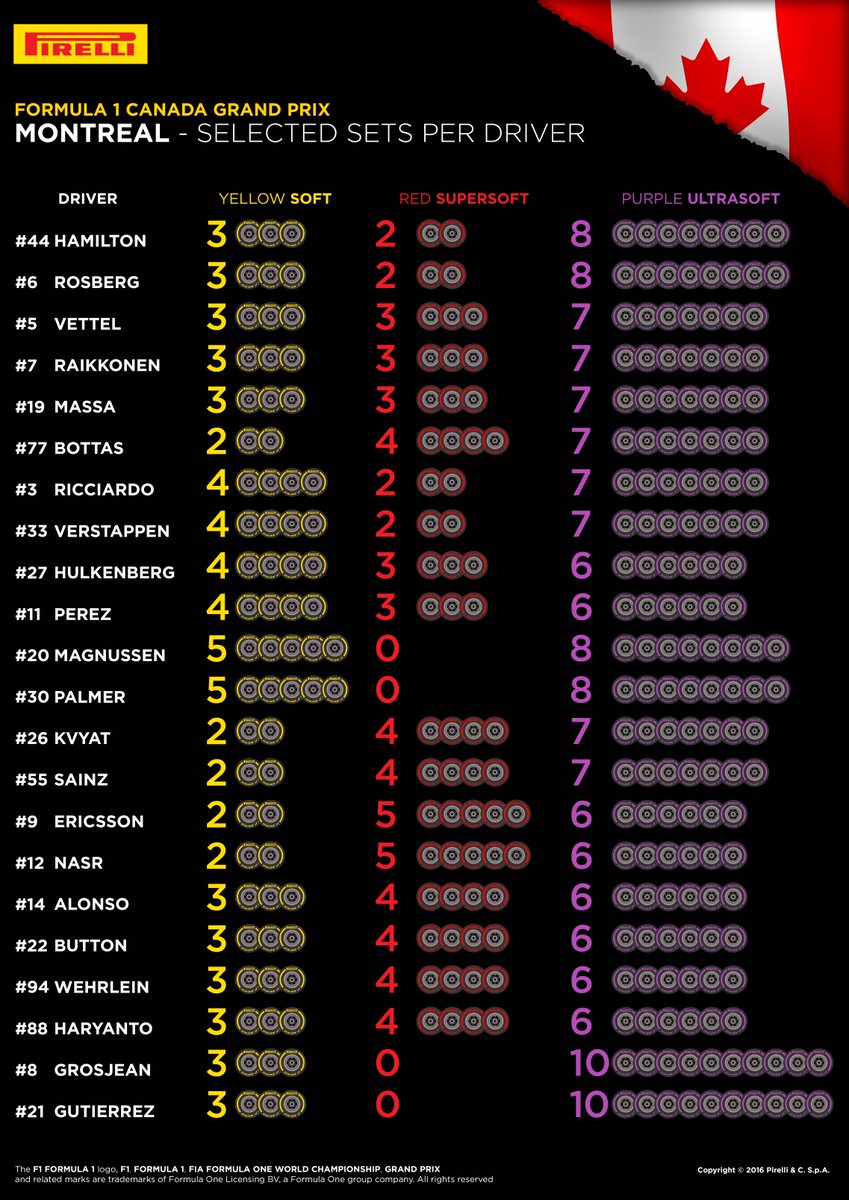 Valued Member
Wonder if anyone will 'do a Ricciardo' and hold on supersofts for Q2. I suspect that'd be better than starting on the ultras.

Premium Contributor
The three tyre choices are really interesting. Is this a Pirelli experiment ?

Valued Member
I suppose the "third" tyre is an experiment everywhere.

Staff Member
Premium Contributor
Massa and Bottas are the only teammates to have different numbers of tyres. Not an earth shattering difference but at least they seem to be trying something.

Valued Member
I reckon Haas and Renault are going for a 5 stop strategy given it worked so well for Button in 2011.

cider_and_toast said:
Massa and Bottas are the only teammates to have different numbers of tyres. Not an earth shattering difference but at least they seem to be trying something.
Click to expand

Usually from what I have seen from the earlier situations where teams have had different tyre allocations for their drivers, the difference will be equalled after practice.

I assume Williams have a test in mind on which one is better tyre to take after ultrasofts which have been used in the start with the likely situation of both Williamses being in top 10 in the qualifying.

Both Pirelli's mandatory race compounds are softs though - that's why every team has at least two of them and the same reason leads to no supersofts for Haas and Renault.

Apparently Pirelli have decided to rename their tires for this season. We now have:-
Purple - in future this will be know as "Ice" impossible to heat without melting
Red - now known as "walnut" - these definitely taste better than they perform
Yellow - now "carbonized epoxy resin" it looks black so drivers and teams might confuse them with real tires
White - "stone" as useful to an F1 car as a trailer full of rocks
Orange - now "wurtzite boron nitride" seeing one of these actually used in a race will be rare and most likely end up a very expensive mistake (similar to the ring stone it imitates)

Ferrari are bringing a turbo upgrade to Canada. No tokens used as the FiA has approved this for reliability reasons. Bottom line is it will allow the SF16-H to use their electrical power to boost drive power for around 5 seconds longer. Very useful to for both defense and attack.

In the current config the eletrical power is being used to keep the much bigger 2016 turbo spooled up. A solution has been found so now the power used to keep the bigger turbo spooled can be diverted to the wheels and should last about 5 or 6 seconds. That's the theory anyway as reported here GP CANADA: la Ferrari porta al debutto il nuovo gruppo turbocompressore - FUNOANALISITECNICA