So the F1 circus rolls into Singapore and pitches its big top tent for the 7th time in the region for F1’s original (and best) night race. It was seen as a bit of a gimmick when it was brought in but I have to say I’ve always enjoyed the spectacle of the cars under the lights and it works especially well with imagery of the super connecting highways running round the track and the bright lights from the skyscrapers and hotels. Whilst the track lay out could be better it has not left us with a shortage in excitement over the years and whether it be Alonso and Vettel going the whole Grand Prix nose to bumper, Hamilton and Webber tangling after the safety car or, of course, Alonso’s infamous Piquet Jr assisted win at the first race, we’ve never been short of things to talk about.

Who has form here? Well the aforementioned Alonso has always gone well here (although I doubt we’ll hear him brag about the 2008 race) and the circuit is a bit of a car leveller so I expect him to have a great race.

Singapore has always represented the start of Vettel’s purple patch of form in previous season so you would also expect him to have a good showing, whether that showing will be as good as his team mate Ricciardo remains to be seen. Where the championship challenge is concerned Nico Rosberg has always looked good around Singapore and came very close to winning it twice in a Williams. Rosberg would have won the second time if not for a silly error crossing the pit lane line. Hamilton meanwhile has always been quick here but has constantly appeared to find trouble around the track and not pull off the result he looked set to get. One driver who has never had a good time around this track is Kimi Raikonnen. Whether that’s due to too many Singapore slings who knows but its something he really needs to turn round with the way his current season has been going
.
Singapore is also notorious as a race of attrition with the tight street circuit nature not leaving much room for error and therefore the race racks up the number of retirements from a crash situation as well as the number of safety cars. This could of course leave the door open for the teams at the back to pick some points up. The safe bet on that would be Bianchi bringing the Marussia home for a good result but the Sauber has been looking a little bit more steady of late and they really need to be if they don’t want the embarrassment of finishing behind Marussia in the constructors championship this season . The problem for Sauber is though that you’d bet pretty heavily on both their drivers actually being the ones to get involved in the accident. Romain Grosjean might certainly be a good bet to add to his points tally whilst team mate Maldonado might not look such a good prospect. Its hard to predict whether Caterham will be around for the points as its hard to predict who will be driving for them. Everyone who gets in the car appears to be quicker than Ericson so I guess it depends on who they put in and their form. If its Roberto Merhi you’d be hard pushed to think a rookie would make the full distance without an error.

The main midfield battle at the minute appears to be Mclaren and Force India with Mclaren on the way up and Force India on the way down. Perez had a great race at Monza but is known to get in the wars around Singapore and Hulkenberg has been strangely subdued in the last few races. Button is usually good around street circuits so should show well here and his rookie teammate is looking increasingly quicker at the moment and would have scored good results but for 2 penalties in the last two races (one of them maybe fair enough and one of them just stupid). I hope this doesn’t put KMag off his defensive driving style as its exciting to watch and should work well around this track even though he’s never raced here before. Another driver who hasn’t driven round here before is Kvyat, but judging on the speed he managed to catch these guys at Monza he should be in the mix with them. He will need new overalls after the brakes failing him at turn one with two laps to go in Italy.

For me Singapore is the Asian Monaco and a very shiny jewel in the F1 crown but I do understand there are others who have a different view on that. Never the less I’m sure we are all looking forward to what should be the next instalment in the Hamilton/Rosberg title scrap.
Last edited: 7 September 2014
Click to expand

My money is on Ricciardo.

Valued Member
I think Fernando deserves a win this season but I doubt it will happen. This could be his last chance.

Contributor
FB have you heard Kimi is planning to crash into the pit wall then?

Although Williams don't appear to want to show up their engine suppliers factory team this year. Its all very polite between the two teams.

I can see an Alonso win, probably in exceptional circumstances. A McLaren win is starting to look more likely though, and that's saying something.

Valued Member
Ron must have been doing a sex wee in his pants at Monza this weekend, I think McLaren will struggle more on the high downforce circuit that is Singapore though. I wonder how close Red Bull will be to the Mercs at this race?
M

What's one of them then?

This track is amazing, at day time.

I disagree that Rosberg would have won without that pit exit line mistake. 2nd place was almost certain, but to beat Hamilton that day he would have needed something extra compared what he showed in early parts of the race.

Contributor
Funnily enough, despite the lack of straights, this could be one of the best races for McLaren as their lack of downforce is less of a handicap. They had reasonable performances on other street circuits. Red Bull will be reasonably close to Mercedes and Ferrari will be alright too (although Räikkönen probably dislikes the track a lot). I also think Toro Rosso will be quite strong, the car seems to have a lot of mechanical grip. Singapore may be the best opportunity for Sauber to score points. 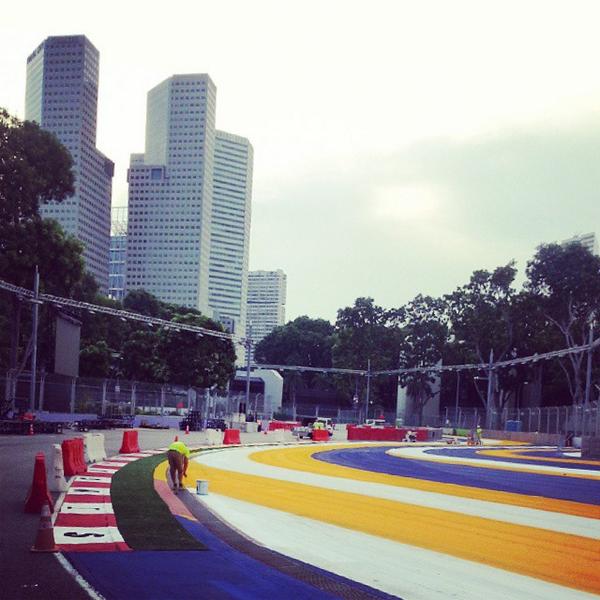 they could run it without lights!

Premium Contributor
Which bit do you drive on!!!

rufus_mcdufus said:
I can see an Alonso win, probably in exceptional circumstances.
Click to expand

That's been done already, I doubt he'd get away with it twice.

He already did get away with it twice Chad Stewarthill . Crash gate and the idiotic Red Bull strategy in 2010.
Last edited: 12 September 2014

Titch said:
Which bit do you drive on!!!
Click to expand

Here are the times.

I always assumed they used big industrial painters to put the artwork on the tarmac, not some poor schmuck with a 3 inch brush and a 5 Ltr tin of Dulux from B&Q, it would take ages..........

Contributor
It's Singapore, endless folk willing to work for a pittance.

Contributor
The average salary in Singapore is 7447 SGD per month.

The exchange rate against the pound is approximately £1 = 2 SGD