Valued Member
All this talk of pole position and Lewis Hamilton not winning from it has made me think. What does wins from pole tell us about a driver?

Firstly, the overall leaders. Michael Schumacher has won 40 Grand Prix from pole. Ayrton Senna has won 29. Then there are 6 drivers on between 10 and 20 Grand Prix wins from pole:

Hamilton has won 9 races from pole - thats far from a bad record - he is equal 10th overall with Ascari and Lauda.

So, of those 12, who converts the highest percentage of their poles: 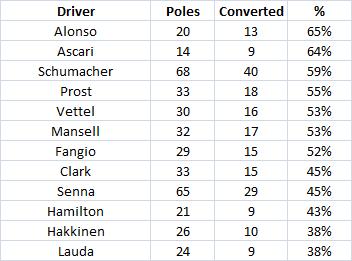 Clark and Fangio were driving, of course, in an age of higher unreliability. Ascari, ironically, probably wasn't - the majority of his poles were in 1952-53 when his F2 Ferrari package wasn't required to be pushed to breaking point in order to win.

But it is somewhat surprising to see that the surest converter of poles to wins in that lot is Fernando Alonso.

Contributor
Doesn't surprise me at all and if I were a 'little more technical' I might have known that already!

Pole is undoubtedly an advantage, but as your chart points out, it is only worth having if you can do anything with it - Schumacher has only managed a 59% conversion rate (and Senna, even lower at 45%), so this would highlight the fact that the fastest aren't necessarily the best overall.

Contributor
I would like to see that side by side with % wins not from pole and also % wins from all starts.

ExtremeNinja said:
I would like to see that side by side with % wins not from pole and also % wins from all starts.
Click to expand

I've been told before that I can be too demanding.

Contributor
Interesting figures. However they can change fast, for example had Hamilton had better luck he may have won in Australia and Malaysia, this would have changed his conversion rate from 43% to 52% and put him on parr with Fangio.

Contributor
Before i saw that chart i would have thought that Michael Schumacher would have had the best conversion rate.

no-FIAt-please said:
Interesting figures. However they can change fast, for example had Hamilton had better luck he may have won in Australia and Malaysia, this would have changed his conversion rate from 43% to 52% and put him on parr with Fangio.
Click to expand

Yes, but he didn't - a conversion suggests a degree of control (at least to me) which was lacking on those two occasions, so it's irrelevant.

Taking Jen's comment a step further, I think the real value of those figures is that they show clearly that a conversion of a pole position to a win is, on average, a 50/50 proposition and never a foregone conclusion. I would hope that this put to sleep the idea that a polesitter is a "choker" when he doesn't win the race. A very useful chart.It's in my back pocket for later use.

I think another even more interesting stat would be number of wins not from pole, probably more impressive (to me anyway) than the number of wins from pole as it may suggest a driver who can win in not necessarily the best car (or is more of a racer than a qualifier).

Contributor
Goodness, TBY might have his work cut out here!

This is an interesting statistic, but Im not sure what it actually tells us without taking other things into consideration. Such as how many poles the driver got, how long it took the driver to get that many poles,what percentage of poles the driver got compared to his team mate/mates,how good a car has this driver been in? I'm sure there's more. Does the driver with a higher number of poles but a lower conversion rate extract more out of an inferior car over a lap?How to compare a driver who gets over 60 poles and converts half of them, with a driver who gets 5 poles and converts 4 of them? Or the driver with 15 years of F1 racing in different teams with 2 or three years racing in the same team.What about the driver who only gets one pole in his career but converts it? Its mind boggling when you sart on this isnt it?

You know teabagyokel Alonso is not one of my favs but I have said for a few years if you give Alonso a car with any hope at all he will find and get more out of it, probably has this ability more than any other driver in the current line up. A "passion" driver and good match for Ferrari.

ExtremeNinja said:
I would like to see that side by side with % wins not from pole and also % wins from all starts.
Click to expand

I'm kinda missing Stewart and Piquet in this table, but I don't know where to find their pole-win conversionrate.

Any way, it seems as like Vettel really needs a pole to have a good chance of winning. Whereas Lauda and Prost were very well able to win while they didn't have pole.

I've now added an extra column with the % wins not starting from pole. Vettel and Hakkinen at the bottom and Fangio and Schumacher at the top.

Funny to see where Senna is. With all the stories I heard I'd expect him to have a much higher % of wins not starting from pole, but it's only a 1% difference with Vettel.

What would interest me is how many races overall were won from pole. Then you'd be able to see if a driver is doing better than statistically expected.

Josh said:
Funny to see where Senna is. With all the stories I heard I'd expect him to have a much higher % of wins not starting from pole, but it's only a 1% difference with Vettel.
Click to expand

If someone is on poles relatively often, it's less likely to win when you're not on pole.
Below is a table with the %starts on pole. Once again Fangio is leading...

It seems to me that Fangio was overall the most complete driver. Closely followed by Clark. Then Schumacher and Prost (where Prost had the 'disadvantage' in his early career of fierce competition. With that I simply mean that in the early 80s there was no dominance, because reliability was poor. If his Renault was reliable he could have won a lot more races. But the same goes for Piquet and his Brabham or Jones and his Williams).

Of course it's hard to compare era's. Much more races in a season nowadays, and more reliable cars. But IMO if you look through the era's the chances of a good driver getting a good percentage are pretty even, with the exception of circa 1973-1983. In these years there were a lot of good cars and reliability was often an issue.

Contributor
Womat. You rock. Cheers for your efforts.