Contributor
The political situation in Bahrain is escalating again with more protests taking to the streets and human rights president Alkhawaja on his 58th day of hungar strike, with his deteriorating health looking like he will die in the run up to the Grand Prix on the 22nd April.

Alkhawaja's deteriorating medical condition has become a focus for activists in Bahrain, with the media reporting that the police had to use tear gas to disperse protestors in Manama on Friday night.

If Alkhawaja were to die before the GP the protests could become even more extreme, and what better place to protest than at the F1 circus with the eyes of the world watching.

Damon Hill has been very vocal in expressing his beliefs in the Gardian and on Radio 4 that F1 risks destroying its reputation by being 'indifferent' to the plight of the Bahraines. The former BRDC president and world champion has urged a rethink on hosting the Bahrain GP.

Contributor
I bet it will be called off during the Chinese GP weekend.

Valued Member
I think they'll call it off at Shanghai.

Contributor
I hope it will not go ahead. Even though I voted a particular way I really have no idea.

Contributor
I hope it doesn't.

The more F1 races I see, the happier I am, but I get this nasty feeling that the F1 circus is trying to be used as a pawn in a political game of chess in Bahrain.

My Summary of Events in Bahrain

Staff Member
Team personnel have apparently been given two tickets out of China - one to Bahrain, the other to Europe.

What a crazy situation. 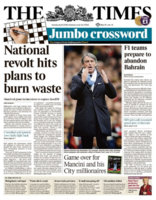 What the betting that those travel recommendations will be changed the week after the Bahrain GP?

Contributor
They haven't been updated in over 10 days anyway. I'm concerned to think that the Foreign and Commonwealth Office can't be bothered to give current information.

Valued Member
The Sports Minister was on 5Live this morning saying it was down to the FIA and sport and politics shouldn't be mixed. There's an old argument.
T

gethinceri said:
They haven't been updated in over 10 days anyway. I'm concerned to think that the Foreign and Commonwealth Office can't be bothered to give current information.
Click to expand

It hasn't changed in 10 days but it has been updated to be current as of today.

Contributor
I know, but are we sure that the situation has not changed? They have information regarding future demonstrations that ends in March, have there been no demonstrations in April? If not then I might buy a ticket.

Contributor
Jailed Bahrain hunger-striker feared dead: lawyer
(AFP) – 2 hours ago
DUBAI — Jailed activist Abdulhadi al-Khawaja was feared to have died, his lawyer said on Monday, after Bahraini authorities turned down repeated requests to contact him.
"Authorities have been refusing since yesterday (Sunday) all requests, made by myself and by his family, to visit or contact al-Khawaja," Mohammed al-Jeshi told AFP.
"We fear that he might have passed away as there is no excuse for them to prevent us from visiting or contacting him," he said, adding that no information was available on Khawaja's health.
Jeshi said the last time he contacted Khawaja was on Saturday, a day after he was moved from the interior ministry hospital into a military hospital in Manama.
Khawaja, a Shiite who was condemned with other opposition activists to life in jail over an alleged plot to topple the Sunni monarchy during a month-long protest a year ago, began a hunger strike on the night of February 8-9.
Bahrain's largest opposition formation Al-Wefaq reiterated its calls for his release on Monday in a statement accusing authorities of "completely ignoring his deteriorating health which has reached a dangerous stage."
Demonstrations in solidarity with Khawaja have multiplied across the tiny kingdom where youth groups organise almost daily evening protests in Shiite villages.
Bahrain's national airline Gulf Air, said its page on a social network website was hacked early on Monday. The page was back a few hours later.
Denmark has asked Bahrain to send Khawaja, who is also a Danish citizen, to the Scandinavian country. Bahrain's official news agency BNA reported Sunday that Manama had turned down the request.
But Danish papers quoted the head of the foreign ministry's consular service, Ole Engberg Mikkelsen, as saying that "a (formal) reply will come through diplomatic channels and not via a news agency or Twitter."
Mikkelsen said he did not know when Manama would send its official reply.
"Unfortunately there is not much time. It is a case where the clock is ticking," he said. "We are continuing our efforts to convince Bahrain that it is in everyone's interest that he be extradited."
Front Line Defenders, a Dublin-based NGO, warned that Khawaja could now die in jail, while Al-Wefaq has said refusing a transfer to Denmark amounted to having "signed his death" sentence.
T

greenlantern101 - Not in any way undermining the seriousness of the situation, there are a couple of aspects to this.

The first is that, under international law and several conventions governing inter-government activities concerning citizens (including consular assistance, extradition, and repatriation), in dual nationality cases a dual-national of country A and country B cannot plead the "nationality A" card in respect of activities he/she took in country B, and vice versa.
As a citizen of country B the fact of additional nationality of country A is not relevant in country B. Country B may extend diplomatic courtesies to country A in such a case but it has no legal obligation to do so, and country A has absolutely no rights to expect anything more than minimal politeness.
This is not the case if said person was in country C, in which case he/she would be entitled to play either or both "foreign national" cards in accordance with his A passport and B passport.

Secondly a hunger strike is the most potent weapon a protester has because it's the most unreasonable in terms of any possible resolution that may or may not result.
Anything resulting from it (ranging from letting the hunger striker die of his own volition, through force feeding, to capituation by the government being protested against) will be equally villified by just about everyone inside and outside the country and, whatever the outcome, makes the resulting situation untenable for all concerned.
Far more effective is to mobilise support (via friends and allies) inside and outside the country, if possible, or to mobilise support of a reputable NGO such as Amnesty International. It's slow but given time it can be effective without alienating just about everyone.

Contributor
Looking at the news over the past couple of days and events close to the site itself I would say its extremely unlikely this will go ahead. To be honest I was very supprised it was put on the calender in the first place especially so close to the beginning of the season.

Another report from the "unnamed team principal"
T

The Guardian today merely quotes a leading member at one of the teams (who has broken ranks with FIA and FOM) in its article.
I guess it's still possible it's not a Team Principal but just a (senior) staffer expressing an unofficial/unapproved opinion under the cloak of anonymity.

Another report from the "unnamed team principal"
Click to expand