So its thats time again, the offseason is almost over as this time next week, we will be a few hours from Bahrain qualifying where all the guessing stops & we know the pecking order. although we have had some rescheduling before we had even started because Australia has been moved to the end of the season instead of the start & test got moved 2 weeks later. but i believe this years season opener unlike 2020 will go ahead as scheduled, not have a dramatic press conference 3 hours before FP1 was due to take place & austria will go back to being 9th round not the season opener

but hopefully we have got a great season to look forward to firstly we have the longest F1 season in its history, 23 races which is massive. jackie stewart on winning world championship in 1969 & 1971 were collectively only 22 races. shows how far F1 has expanded. in those 23 race we will be going to imola & portimao getting a 2nd chance after stepping in so well during the pandemic last season. finally get to have our 1st look at zandvoort albeit 16 months later than we thought, but vietnam is the casualty of the pandemic, because that has been binned & weirdly the only evidence of the it will be in F1 2020 video game & go to saudi arabia for the 1st new race not designed by herman tilke since 1995 argentine GP . also after an enforced sabbatical in 2020 we will finally get back to Monaco, Baku, Canada, unfortunately france, Singapore, Japan, USA, Brazil, Mexico & Australia in 2021

maybe just maybe. we could have our 1st interteam title battle since 2012, which is ridiclous to think that F1 has gone 9yrs, you cant imagine hypothetically going into jerez 1997. as the 1st title battle since prost senna 1989. it seems massive gap but that what we have currently have & as great as lewis hamilton as been, just like Schumacher or Vettel domination its not great for the sport as a whole. but maybe we have got season long fight between red bull & mercedes, likely the young pretender v the old expert. that we have been hoping for ever since max won the spanish gp in 2016. (but young pretender might be stretching it as Max would be 6 weeks older than vettel was next sunday, when he won his 1st world title in 2010 & in abu dhabi if he won, would be only 3 weeks younger than alonso in 2005) but besides that we have best teammate to verstappen on paper since riccardio & Bottas who if he could string a season together instead of just individual races could have a chance.

down the rest of the grid it doesnt look like there is much change , mclaren still look the best of the rest, Alpha Tauri could have jumped ahead of ferrari looking very good with great pairing of gasly & tsunoda who is highly rated, Aston Martin mayve dropped abit after struggle in testing. Williams look like they are on the way back & Haas the signs dont look good as they had stop developing the 2021 car before testing. as nice as it is to have a schumacher back on the grid, so could be a hard year for Mick Schumacher but it didnt do George Russell any harm. could help him to make his mistakes & learn out of the limelight. which if he was in the midfield with that surname could do more harm than good

on Bahrain, well we all hope that it wont be as eventful as our last trips to circuit 4 months with grosjean accident then heartbreaking bad luck from russell after stunning debut drive then perez rollercoaster ride from retiring from 3rd on the penultimate lap to 7 days later getting taken out then getting back to the pits coming through the field to win his maiden victory & that all 20 drivers are safe come the end of the race. the trends bode well because 7 of the 9 winners since 2012 have won the world title after winning in Sakhir & also bar 2008 (crash & 13th) & 2010 (4th). world champion has stood on every sakhir podium. but in aload of pre season uncertainity, i guarantee 1 thing 2021 season opener cant be any worse than 2010 the last time Bahrain started the season. it was such a dull affair that there was talk about a mandatory 2 stop to bring some entertainment

but welcome to 2021, hope that you enjoy another year of F1 & the last before the biggest overhaul of F1 regulations since 1998
Click to expand

Alpha Tauri, and Mclaren appear closer to the front

Alpine will be interesting to watch as the sole Renault powered teamand Alonso's return alongside Brivio who moved from MotoGp to F1 to lead the team. They have yet to look like front runners so could Alonso bring in 1 second a lap and dont forget Ocon ..Verstappen's long time junior rival who also wants to remind everyone he is a frontrunner

Valued Member
Is anyone else feeling uncomfortable about the hype around Red Bull? I've had my hopes dashed too many times before.

Even if they do win, it's a long season in prospect and you'd have to back Mercedes to get any issues with their car fixed quickly.

I hope McLaren can make a step forward although managing the change of engine might set them back a bit initially, should be a very strong and well-balanced driver lineup.

Aston Martin in F1 still feels wrong and, like Jaguar, looks to me like it could turn out badly. Still I hope Seb can provide a few better results & memories to take into retirement than were possible last season.

Galahad said:
Is anyone else feeling uncomfortable about the hype around Red Bull? I've had my hopes dashed too many times before.
Click to expand

yeah its more hope than expectation as we badly need a competitive season. not 1 running away with it

Staff Member
Premium Contributor
This season is an odd one. The teams will be looking to 2022 from an engineering point of view. The current financial climate isn't good for anyone so there is less likely to be the incentive for big, expensive updates. Finally, with only three days of pre-season testing there hasn't been much real time data coming in.

A quick Google of articles after the Bahrain test shows few media outlets sticking their necks out to interpret how things went.

Merc did seem to have an issue with its gearbox but other than that, I don't think we've seen too much to suggest a huge change in the status quo.

Red Bull's big problem may not come from its gap to Mercedes but whether they will be swallowed up into a battle with Ferrari and McLaren.

there is something about McLaren that i like. have ever since they got Mercedes engines & Riccardo. felt even from avu dhabi they will win a GP this year

Galahad said:
Is anyone else feeling uncomfortable about the hype around Red Bull? I've had my hopes dashed too many times before.

Even if they do win, it's a long season in prospect and you'd have to back Mercedes to get any issues with their car fixed quickly.

I hope McLaren can make a step forward although managing the change of engine might set them back a bit initially, should be a very strong and well-balanced driver lineup.

Aston Martin in F1 still feels wrong and, like Jaguar, looks to me like it could turn out badly. Still I hope Seb can provide a few better results & memories to take into retirement than were possible last season.
Click to expand

cider_and_toast seen your the most optimistic about Ferrari. i was fascinated what you seen that..

Contributor
I don’t suppose we’ll have to worry about rain. 😄

I'm not about to get my hopes up over Red Bull yet, but I do think there is something to the aero changes and the high rake car of Red Bull having a legitimate advantage over the low rake, longer wheel base Mercedes. The bigger question is going to be, can Red Bull and Max especially, mount a season long fight against Hamilton and Mercedes?

Contributor
I am certain that Red Bull will be faster than Mercedes.

At least until the morning of March 26th anyway. 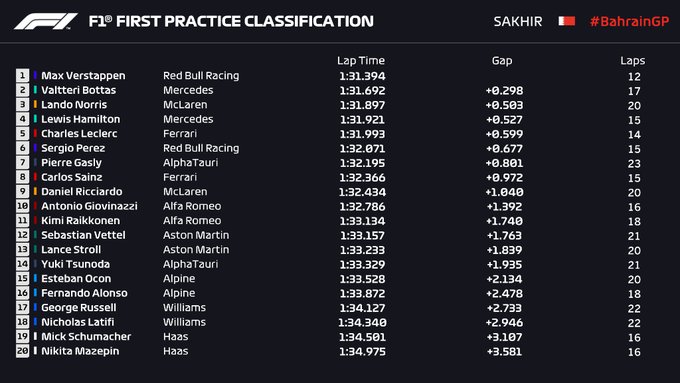 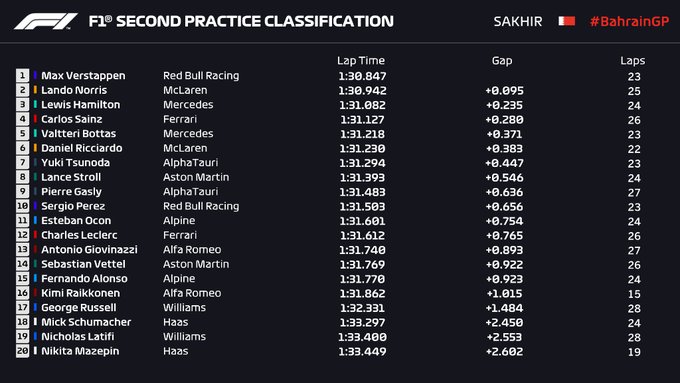 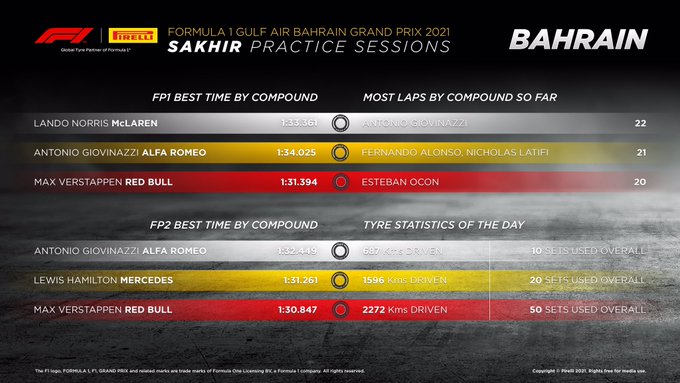 Contributor
The best driver on the grid is only 15th. There must be some sort of mistake.

Johnny Carwash said:
The best driver on the grid is only 15th. There must be some sort of mistake.
Click to expand

Alpine are just sandbagging. Be prepared for the best driver on the grid to blitz everyone tomorrow.

Seriously though, will we even make it past this weekend before Alonso is bemoaning the fact that if he was in a Mercedes or Red Bull that he’d win every race and it’s all Alpine’s/Renault’s fault he’s not at the front of the grid?

aaron8831 said:
Alpine are just sandbagging. Be prepared for the best driver on the grid to blitz everyone tomorrow.
Click to expand

He’s keeping his 6/10ths of a second a lap up his sleeve for tomorrow.

Johnny Carwash said:
The best driver on the grid is only 15th. There must be some sort of mistake.
Click to expand

how delighted is Riccardo now. he has played an absolute blinder.

although alonso id thought in testing that they were 7th best & seemingly true
Last edited: 26 March 2021

Renault chose an appropriate name Alpline... they really do have a mountain to reach the top

The gap between Stroll and Vettel is interesting to note⁹

very excited about this race. as people know im always exited for the 1st race & then cant be bothered for 2nd race. as the 1st race was terrible

but i think this is the season we have waited for since 2010 as 2012 was just alonso producing a miracle in a similar way to if max was within 20 laps of 2020 title. but a proper head to head with multiple teams. i still think Hamilton will take pole . but similar to 2018/19 in Singapore Belgium Italy or even turkey 2020 when his talent overachieved what car was capable of.

which is overshadowed because he has the best car