"Just noticed @jensonbutton unfollowed, thats a shame. After 3 years as teammates, I thought we respected one another but clearly he doesn't."

Valued Member
I don't think he ever followed lewis. I could be wrong, but I follow both of them, and never noticed any cross chatter.

Contributor
Who's stopped following who? Sorry I don't use twitter

Valued Member
Apparently he didn't, and in that case Hamilton has thrown his toys out of the pram for no reason! Great way to burn bridges there

Contributor
All of the "sneaky", "conspiracy", "McLaren anti-Hamilton snakepit" stuff from the Hamilton fanatics seems less and less like nonsense and more like bare fact by the minute. Yep, I really just said that. As someone who has followed Button for the last few years I am falling back into the realms of thinking that he's an arrogant self-interested tosser, as was the prevalent opinion in much of the media before he got his second race-win. Perhaps we have all been romanced by the Brawn story.

It's only Twitter of course, and the whole thing is very childish and generally unimportant, but if it's true then it tells us that Jenson is a nob and Lewis is emotionally immature.

Valued Member
Wow, not noticing he was never followed? For three years? Not really something that I would be that upset about, besides, I think that respect should run far deeper than a follow on Twitter. I just tweeted as such.

I'm pretty sure he was never following him in the first place as I once used Button's twitter to look if there were any others of interest to follow and I don't think I saw Hamilton on there.

Anyway it's not very professional to make comments like that about your teammate in public....

Contributor
What a load of whackness this whole thing is then. Here's what I think happened.

Meaning of Joke: Now Jenson has another teammate to be slower than.

Valued Member
Many of the people I work with are on Twitter,facebook, LinkedIn etc, I do not follow/ friend many of them. Not a mark of disrespect, arrogance or anything, other than I choose not to share parts of my life with some people. I really cannot see what all the fuss is about.

Here you go, Lewis getting upset over nothing. 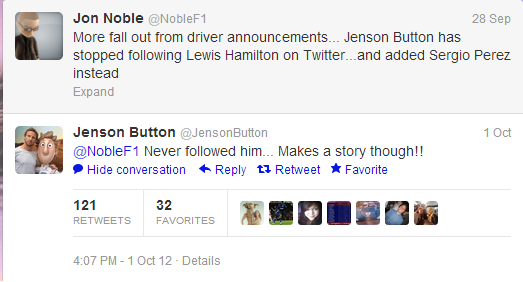 Contributor
I don't use twitter much at all. I only friend actual friends and family on Facebook and I use LinkedIn to connect with colleagues.

I, given the above, I can only again conclude that somebody made a joke that was misinterpreted and that went fairly viral. As sad as it is, or as difficult for some of us to understand Social Networks are as integral to young people lives and much more so than the telephone. In the modern rules of engagement unfollowing someone on Twitter or defriending someone on Facebook is the same as getting incoming phone-calls blocked from somebody.

The whole thing is a storm in a tea-cup, quite obviously.

Contributor
Don't these two meet pretty regularly at race meetings? To say nothing of corporate days. Why would they need to follow each other on Twitter or be friends on Facebook?

My bad, just found out Jenson never followed me. Don't blame him! Need to be on Twitter more!

Valued Member
Lewis has just tweeted "my bad, just found out he never followed me"

No probe there then.

Edit: MCLS must have a faster refresh than me!

Contributor
MCLS and The Pits have just posted:

"my bad, just found out he never followed me"

Contributor
Do Button and Hamilton qualify as "young people"?

I have a Twitter account but have used it very rarely, I also have a Facebook account which I use fairly often to keep in touch with two societies that I am a member of. I find it more convenient to pass info around than emails to a mailing list which would need to be updated from time to time.

Contributor
Lewis is younger than Jenson. I am the same age as Jenson and I consider myself a young person.

Emails are not social media. They are a means of direct communication.

lewis probably followed jenson,so he assumed jenson followed him.
so when he saw jenson didnt follow him,he thought jenson had unfollowed him.basically he thought jenson had turned his back on him,so lewis was a bit hurt.
its not a big deal,but lewis should have asked jenson about it before tweeting,unless they dont really talk anymore,who knows.
lewis has been lashing out alot lately,he's very frustrated.i think lewis feels alot of the team is against him,so thinking button was too really got to him.
we'll see what happens in the remaining races.if button becomes quicker than lewis in quali for the rest of the season,then clearly mclaren only are focused on making sure button finishes the season on a high.
lewis shouldnt have tweeted anything like that,because he should have known it would be blown out of proportion.
to me it just looks like a misunderstanding.but like i said,lewis should have just spoken to jenson about it instead of tweeting about it.
lewis is too spontaneous it seems.

Staff Member
Although it's all rather silly, it's interesting nonetheless that in three years Button hasn't followed Hamilton yet he follows Perez just days after the announcement and Perez isn't even a member of the team yet.

I think that speaks volumes about Button's feelings towards Hamilton.