Im currently in the French Alps skiing and attempting snowboarding. I'm in the same area as I was in the summer when I posted pictures in the cycling thread.....except this time the only way to get to Italy is on skis. The road is only open from about May to October, sometimes we ski over to Italy fro lunch, the food and wine is cheaper over there.

Here are a few pictures of the beautiful scenery in the winter. Only taken with my phone I'm afraid, it's easier to carry around than a camera when skiing. 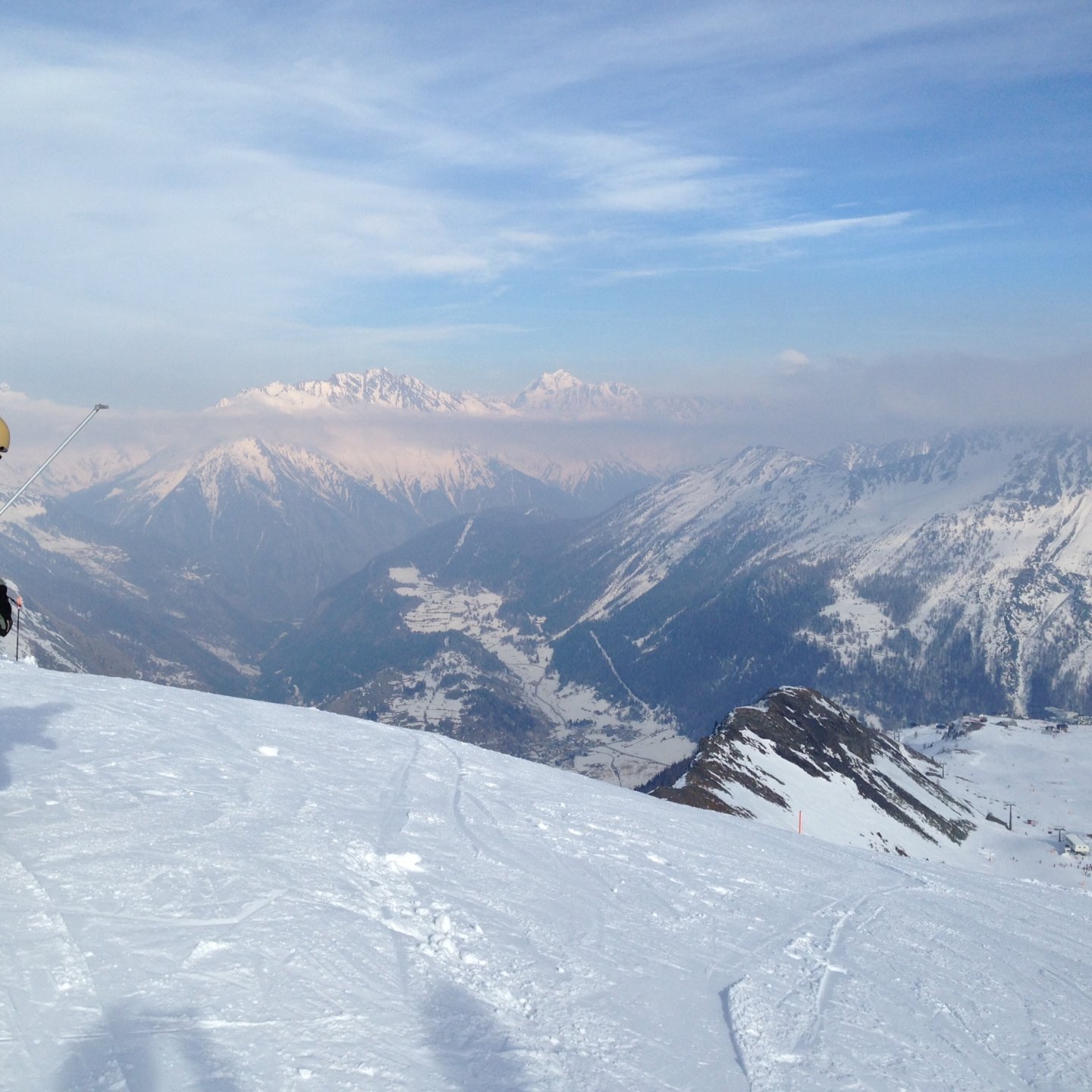 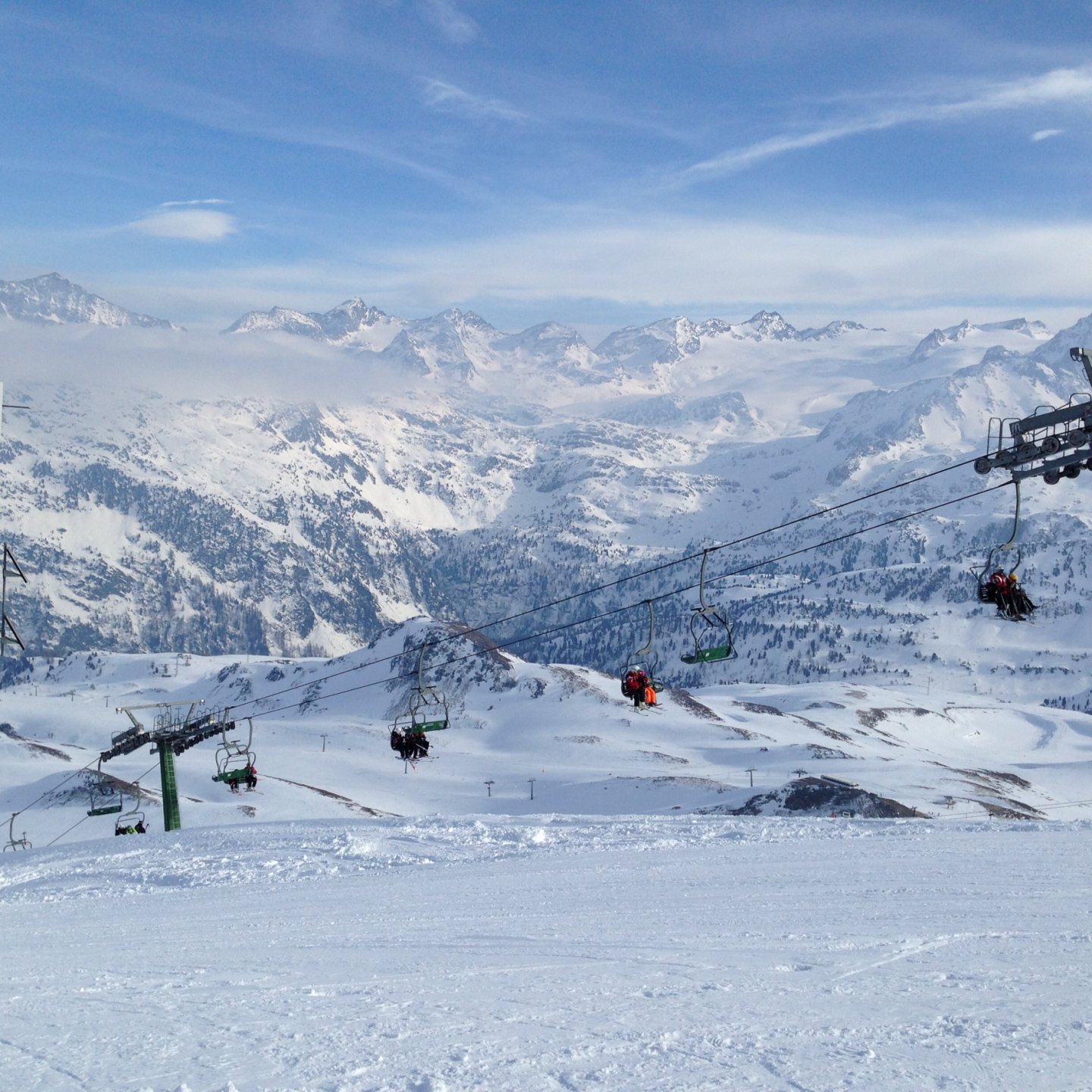 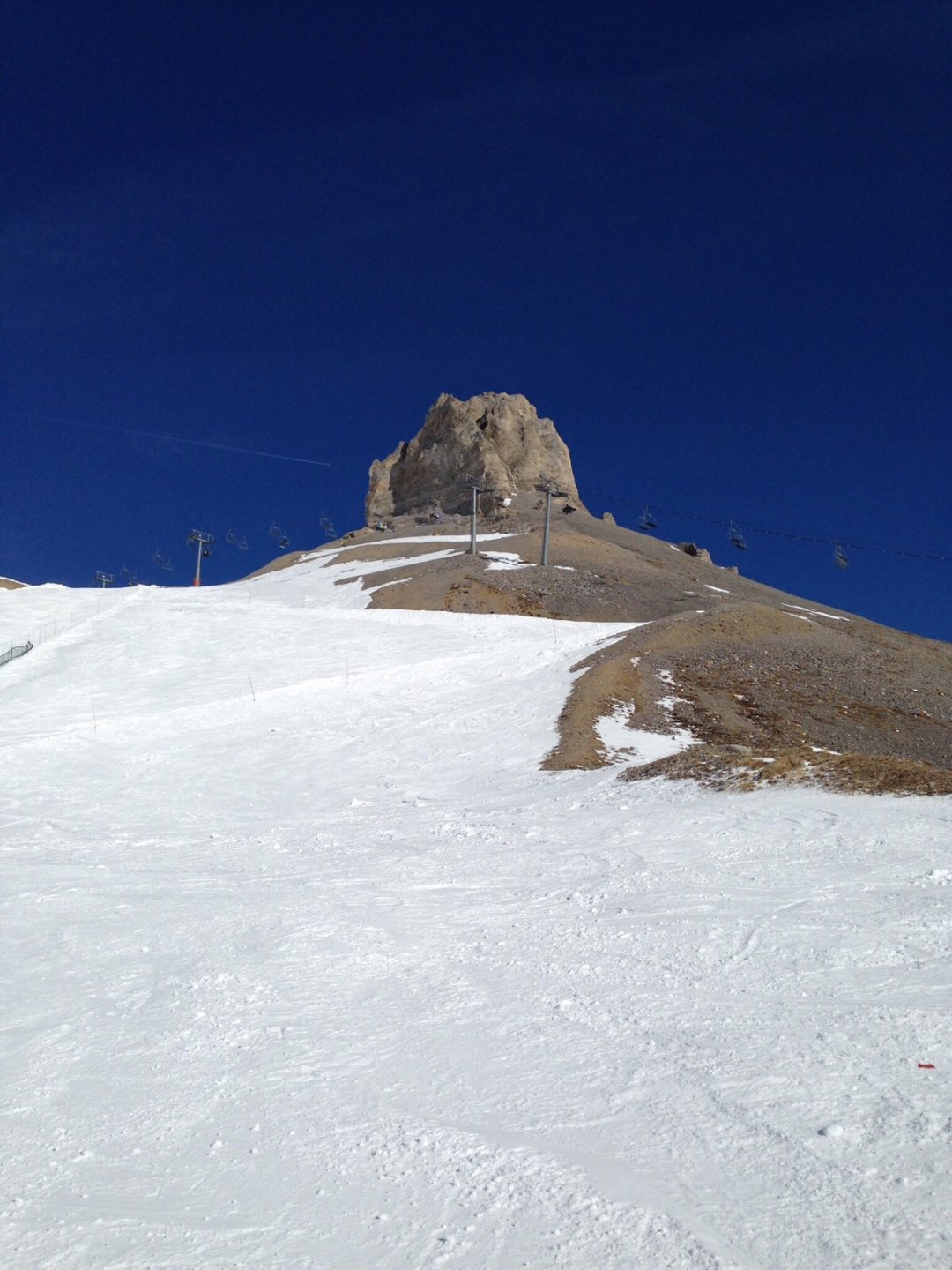 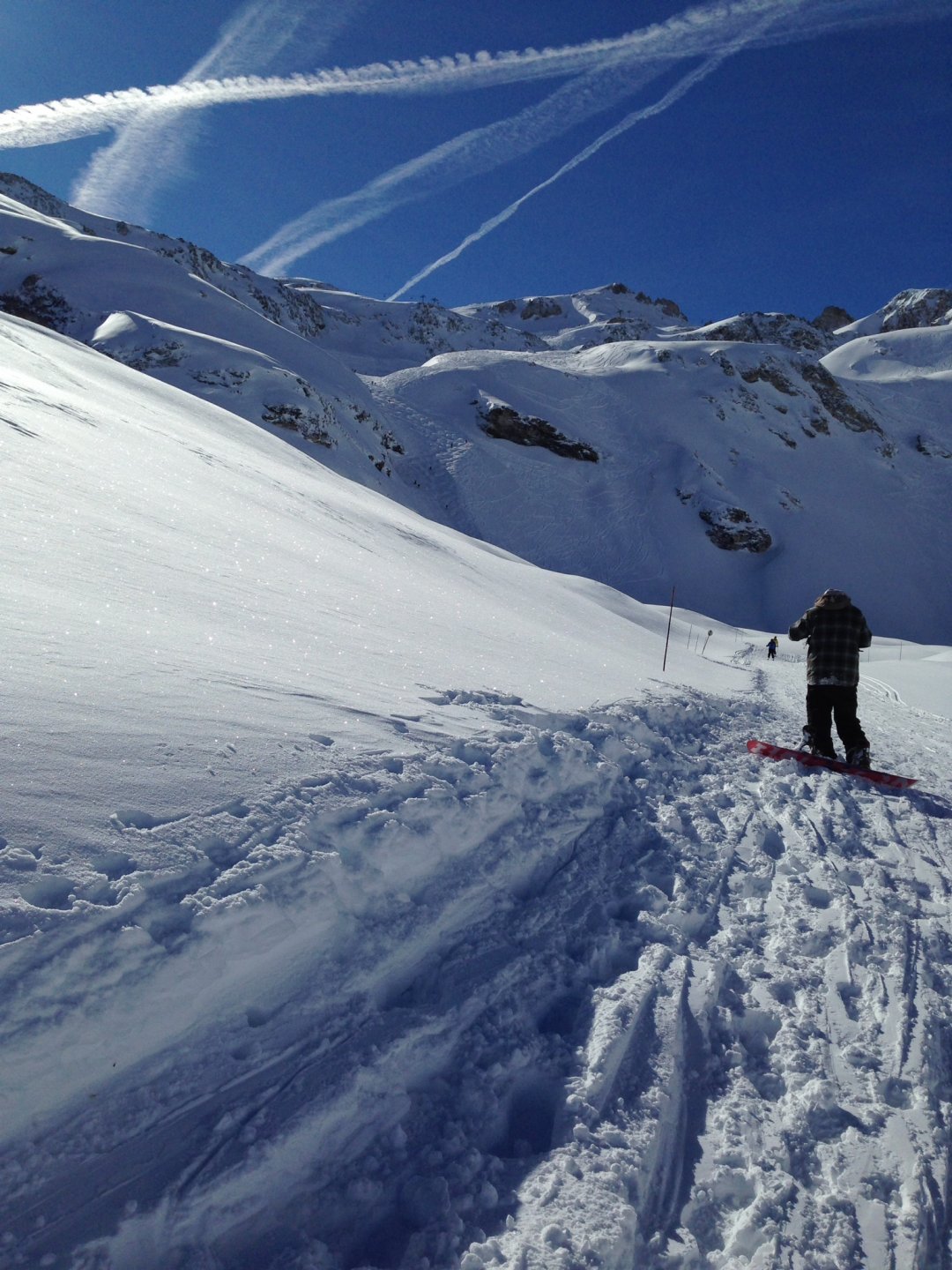 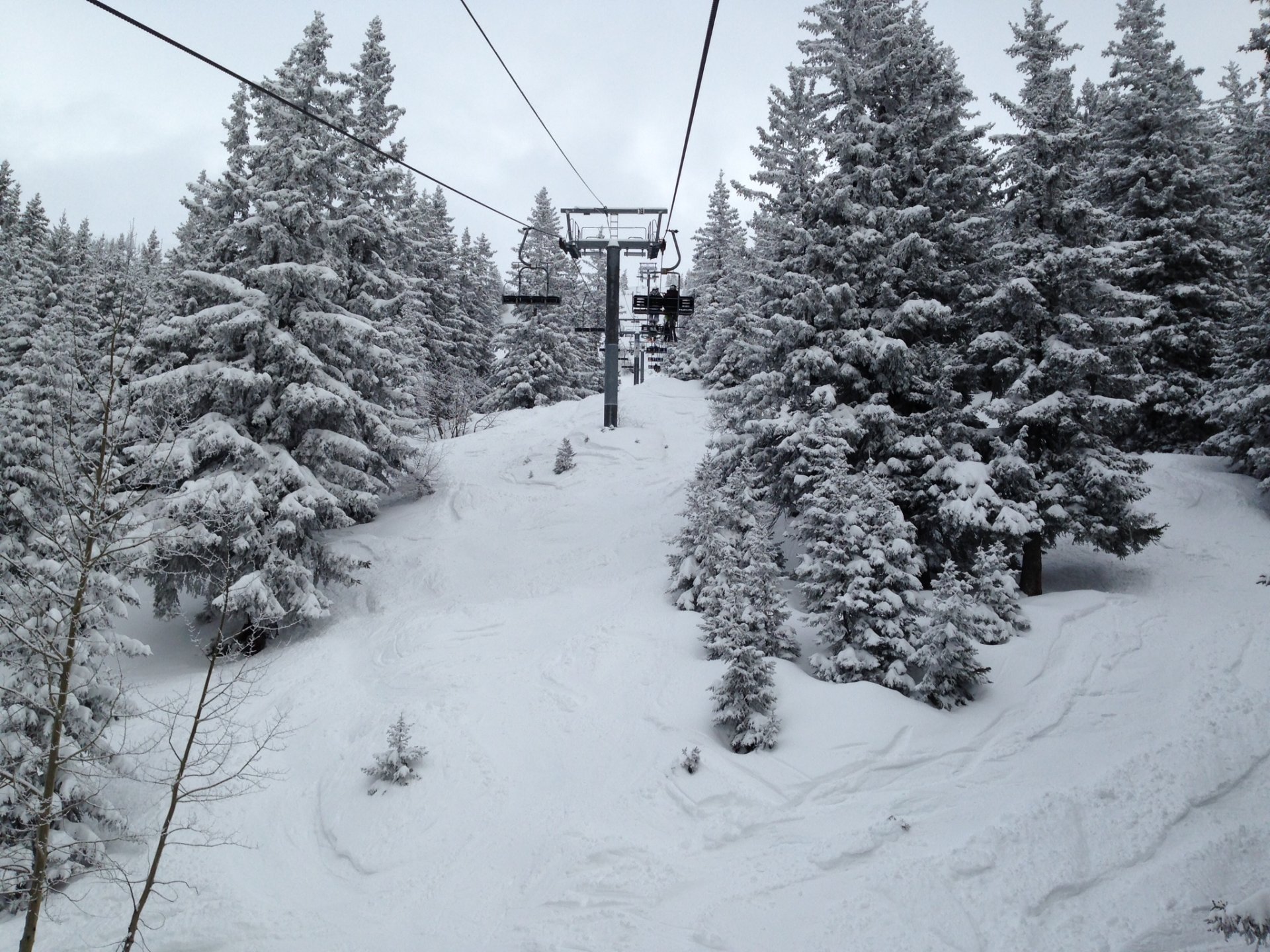 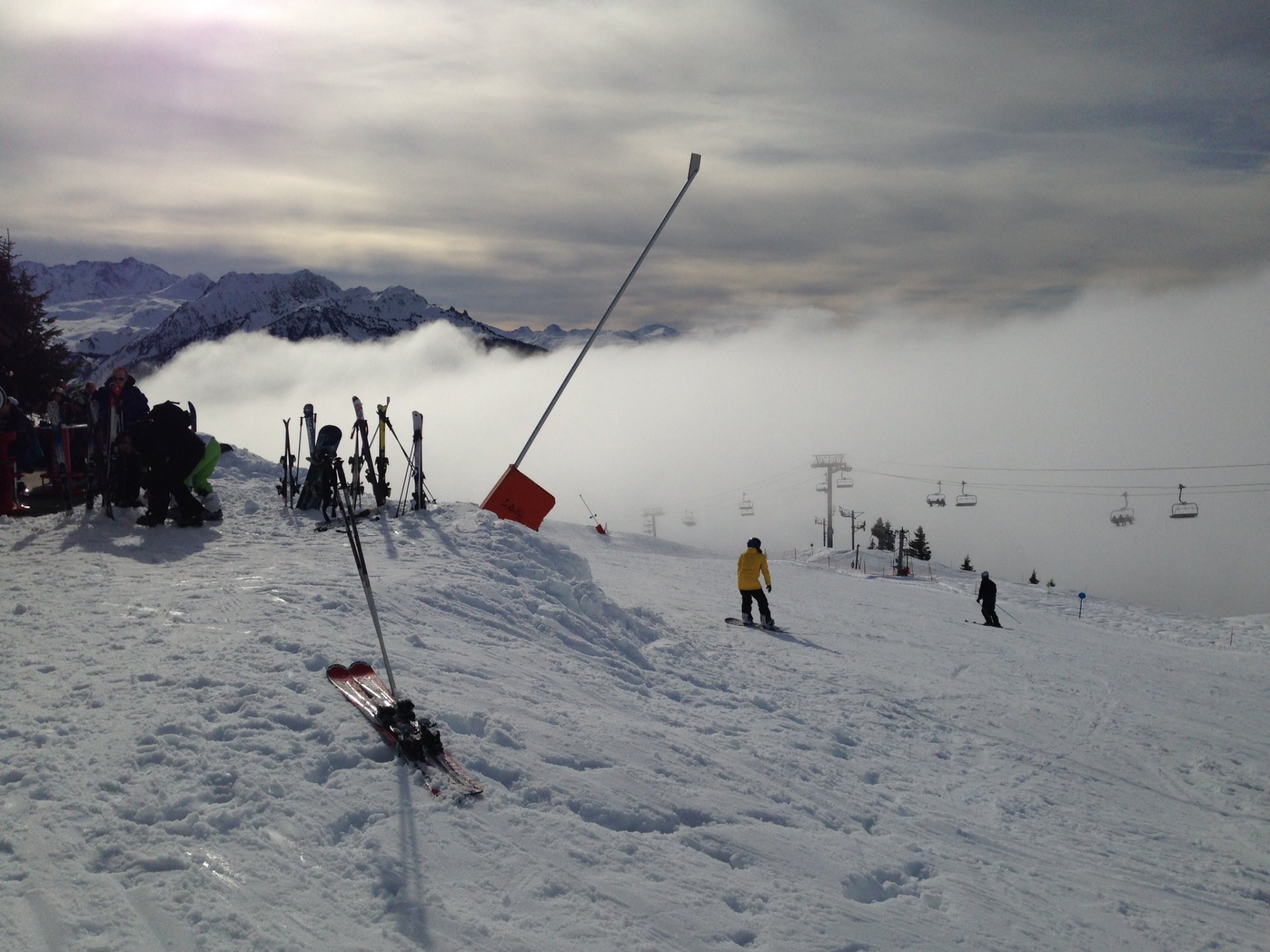 Contributor
Hopefully you are always wearing a helmet and obeying "closed" signs. We don't need you to emulate Michael Schumacher!

Yes. I'm now a fully helmeted skier. And not a massive fan of off piste skiing. I don't think my skis are really fat enough. So I stay mostly on piste.

Did you hear that awful story about the teacher that led pupils onto a closed piste , climbed over the 'piste closed' netting . He took them on a hard black run in high risk Avalanche conditions and caused an avalanche. Two children died.
So yeah. It pays to obey the piste instructions, those guys know what they're doing. 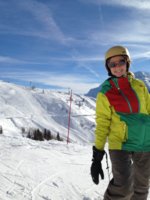 Contributor
I never heard that particular story, but cannot say that I am surprised, having been a member of the US Ski Patrol for over 20 years (One plus: it lets you ski for free at any area in the US).

One of the most unpleasant duties I have had in my entire life (and there have been many) resulted from two skiers skiing off piste. I was called to the site of an avalanche almost two hours after it had occurred, burying two skiers. One of their families was there before I arrived! It was at the confluence of THREE avalanche chutes. I took a look at the other two chutes and saw that the cornices on those chutes had not yet broken loose. Thus I was left with no choice but to tell the family in attendance that, given the circumstances and with the time that had passed since the event, we were in a body recovery mode, not a rescue mode, and that I was not willing to risk the lives of my crew unnecessarily. Therefore, they had two choices: either we blew the cornices on the two remaining chutes, or we came back in the early spring to search for the bodies!! I will never forget their (quite understandable) hysterics!

That's a horrible situation to be in. The thing is when people act recklessly/thoughtlessly/ stupidly etc on ski slopes, they don't only endanger themselves but others too.
I'm sitting having breakfast now, it's snowing and has been on and off all week. They've been blasting the slopes continuously since before 7 a.m. to make them safe. It makes the chalet shake sometimes the blasts are so big.

That incident I mentioned earlier happened only a couple if weeks ago. I believe the teacher is being charged with manslaughter.
The school party were from Lyon and had split in two. He took the best skiers ( they were very good) and two other teachers skied with the rest. He' d climbed over that fence and taken them down that closed run the day before as well. The run had been closed since Christmas as unsafe, marked in different languages and had a 3' high and 50 metre long netting fence closing it off. It wasn't by accident that he strayed on to it, it was deliberate. Going altogether on that unstable run caused the Avalanche. Another man was killed . The teacher was injured, there were lots with broken bones and on the way to hospital two other children had to have their hearts restarted. As a teacher myself I find it completely unbelievable that he did that. Took that risk with those children.

Lol. The skiing comes about due to living in Austria for two years many many years ago. The international school I worked at ran trips every Sunday to ski slopes for the kids and teachers could go too for free. Also easy to have weekends and weeks with the slopes just a drive away.
Then, once the youngest child was old enough to ski we took them every year, cheap packages or driving over with another family. It's now part of winter. Both kids are proficient skiers and snowboarders. I can ski and am attempting snowboarding, albeit very, very badly!

The term "middle class" is relative to where you hail from though. To the locals I guess those that don't go skiing are seen as middle class.

Contributor
Lovely pictures racecub . If it's cheaper in Italy though, why don't you stay there, and ski the other way ?

Thanks Titch.
I have a chalet on the French side which we have been slowly renovating over the last 13 years. It's half of a Savoyard farmhouse , very old where the cows used to be on the ground level and their body heat would heat the house.
The other thing is, you can drive to the French side quite easily from the UK, but in winter the pass to Italy is closed so, you'd have to go round a longer way and through the Mt Blanc tunnel for the Italian side.
And it is quite nice skiing over to Italy for lunch , when friends and family come to stay that's the favourite thing they like to do.

In the summer from the chalet, over the top and right down the Italian side of the mountain to where you can get on the motorway takes about an hour...of very, very twisty road. From there it's easy to get to Genoa and the Italian coast, Milan ( Monza ) , Turin. Lots of places to explore.

Contributor
Sounds lovely. I'm assuming the cows have moved out now? Or have you kept a few for extra heat?

Lol. Yes cows all gone. But sometimes there s a smell of cow in the air. So I think some places still have cows inside.

Unless of course there is someone in your entourage whose aftershave isn't quite what it should be?

Haha. That's one to consider!!

In the summer i mentioned cycling up to the Col and the French/ Italian border. Today I was at the same place but on skis. This is the same restaurant in summer and in winter. The road is only open about 5 months in the summer. 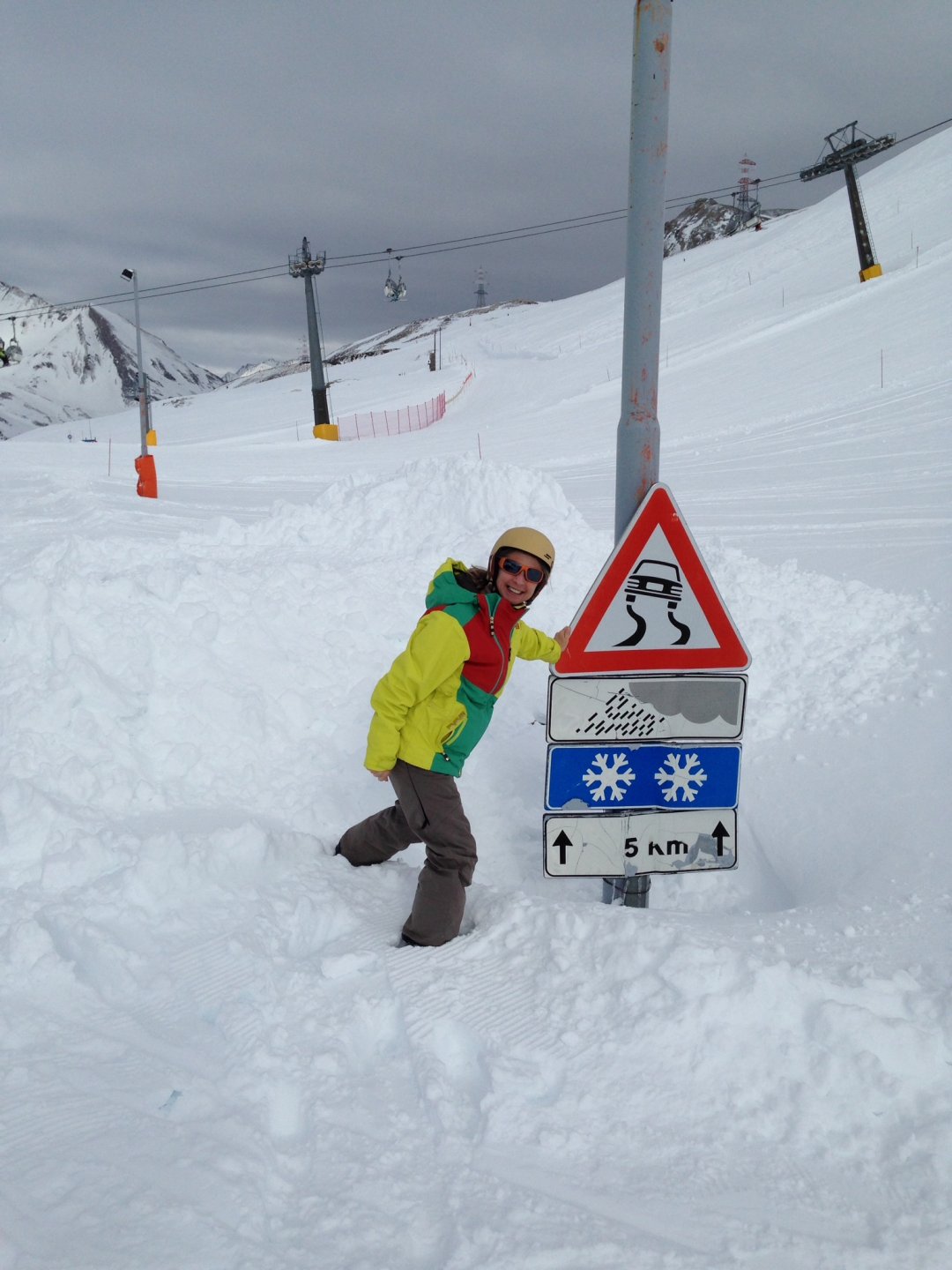 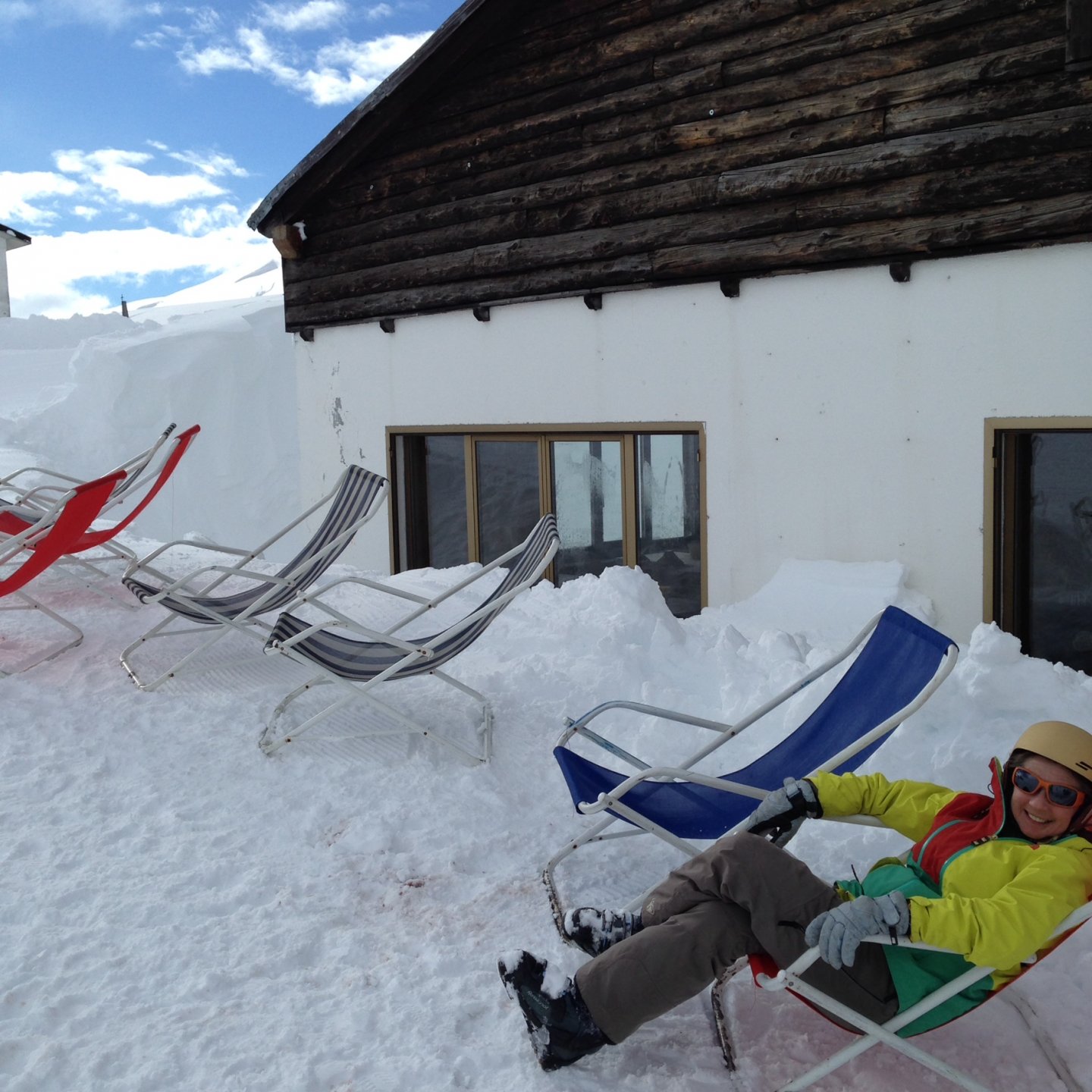 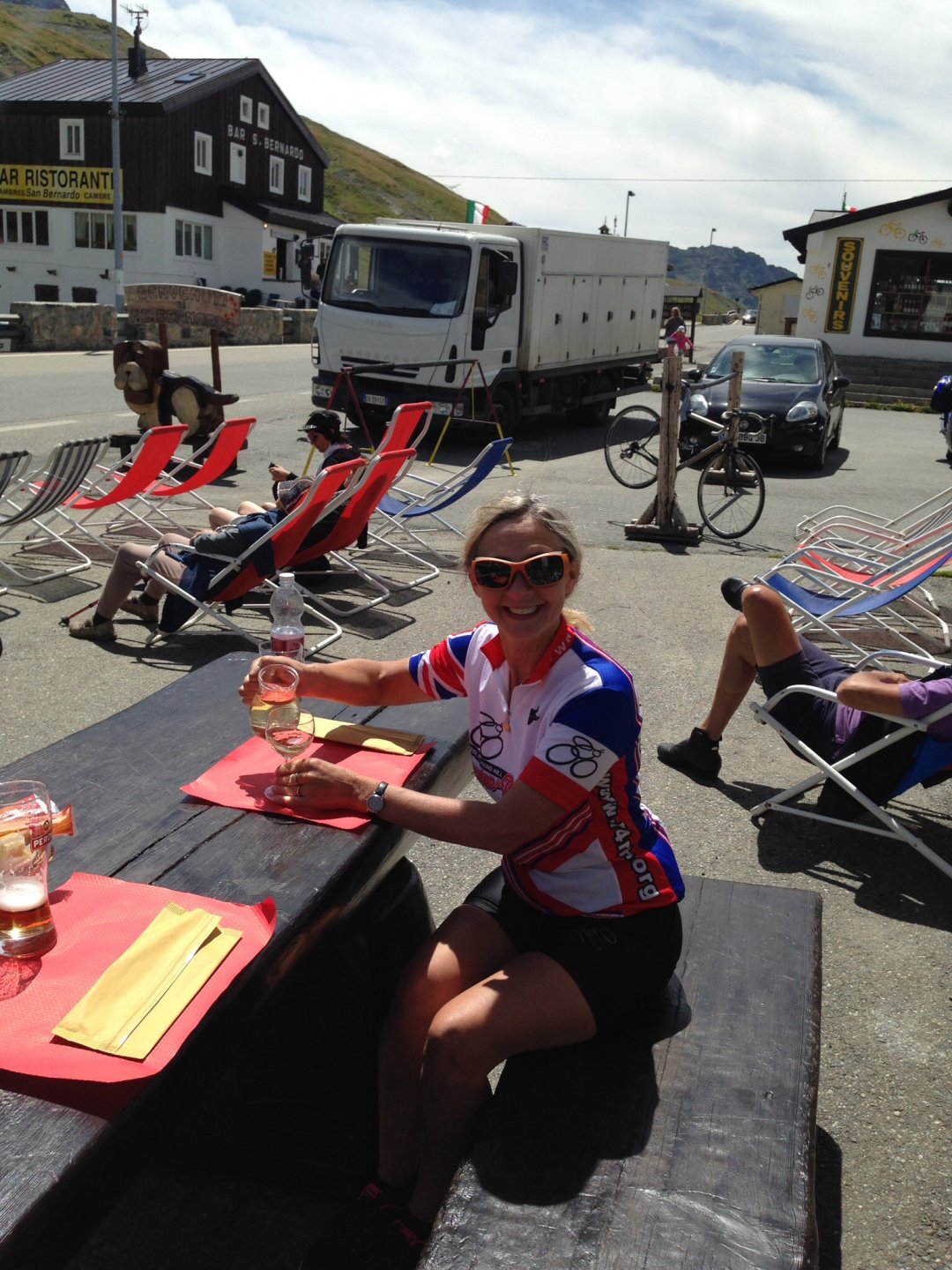 Contributor
Nice pics racecub . Brings back great memories of skiing in the Alps.

I just spent the weekend in Vermont where it was -18F and blowing a gale. Because this is America and everything is more dramatic, today was 70 degrees F warmer. We could have had your winter / summer pics about 2 days apart here... Unbelievable really.

It was good skiing, but it wasn't the Alps.
C

I gave up trying to ski and snowboard in the same time period a while ago as it just confused my brain too much and I kept making rooky mistakes when switching from one discipline to the other...

I love the area you are in, have been around there a number of times for holidays on both sides of the mountains. It is beautiful there and for some reason I find it very peaceful to me even when it is packed with skiers. Something about being surrounded by the mountains just makes me relax and take it all in

Funny you should mention boarding canis, I'm trying to learn it. I've got a board and boots and if the weathers iffy I'm trying to get a handle on boarding on the baby slope. I've only been on a couple of times. I fell off the drag lift three times and eventually wobbled up about six times. I can do heal side turns but not toe side . Might have another try today. It is very different to skiing.
I know what you mean about the peacefulness. I love it!

jez101 woah! That sounds crazy weather! I hate it when the winds really strong, it stings.
C

Valued Member
racecub boarding is very different and yes, heal side is a lot easier than toe side to control. The hardest thing is trying not to lean forward on the toe side as this will stop the board turning as you ease off the edge and only cause you to catch the heal edge and end up on the floor

Have fun with the snowboarding as once you have the basics it is easy to progress and get better. Just no freestyle jumps until you are confident in the landing of them

Contributor
I love the fact that they have the deck chair things out in the snow. A sort of devil may care attitude.