Valued Member
I asked www.random.org to give me 10 random numbers between 1 and 913, and I would write a question about the World Championship Grand Prix which takes that ordinal. 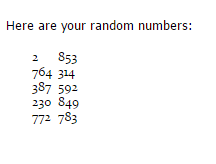 1. What did Bob Gerard become the first person in World Championship history to do at the 1950 Monaco Grand Prix (2)?


He became the first person to finish two races in the same position (6th - bonus half point if you got the right position).
2. At the 2011 Singapore Grand Prix (853), the top five were unsurprisingly Vettel, Button, Webber, Alonso and Hamilton, in a mirror of the final championship. Which driver, by finishing sixth, broke the Championship link?


4 of them were Laffite/Depallier in 1979 (Arg, Brazil, Spain, Belgium) but the fifth was at Brands Hatch in 1980 (Pironi/Laffite).
5. The 1983 European Grand Prix (387) at Brands Hatch saw Nelson Piquet, Alain Prost and Nigel Mansell step on the podium. For 1/3 of a point each, name their team-mates!


Riccardo Patrese, Eddie Cheever and Elio de Angelis
6. Which driver was the only qualifier not to complete lap one at the 1996 German Grand Prix (592) in only his second outing at Hockenheim?


Jos Verstappen
7. Ferrari did not appear at the 1973 Dutch Grand Prix (230). Name either of the two engine suppliers who were not Ford Cosworth.


Twice. Here and in Abu Dhabi, where he retired on Lap 1
9. Which constructor scored the most Constructors' Championship points at the 2007 Spanish Grand Prix (772), without them being retrospectively confiscated?


18. In most of which Ferrari were behind Sakon Yamamoto because shenanigans...

Contributor
0.
Pushing the boundaries, mainly the lower one.

2, but I was one out on a couple questions!

Premium Contributor
1 and I didn't cheat !

Valued Member
In the spirit of the quiz, I scored 362.

Staff Member
Premium Contributor
Also 3 and 2/3. Got the other third (Prost's team mate) spot on then changed my mind at the last minute. Also got 3 down to a 50/50 and then went for the wrong one.

Contributor
4, although I was close for Q10.