When people have previously discussed a potential Kimi Raikkonen return to Formula 1 and in the last few days how it will actually go, a lot of people come to talk about motivation and hunger and say it isn't there, they mainly point towards 2008 + 2009 and say he drove awful seasons then having already become world champion.

Ignoring 2008 I'd like to just talk about his 2009 season, for me he was one of the best 3 drivers of the year along with Button and Hamilton. (thats just my opinion!!)

Ferrari like McLaren had just spent every last moment developing the 2008 car to death right up to the last race in 1 of the closest fought driver championships of modern times and had barely spared a 2nd thought for the 2009 model. And when it arrived it, like the McLaren, was awful and by all acounts a real handful to drive. Again like McLaren they had all the initial KERS balance issues to sort out as well instead of focusing on downforce etc. And with the testing ban it was hard to change it much. Unlike McLaren they just wrote the season off halfway through the year to focus on 2010 so the car never really got much better past that point and he was left to deal with what he had.

Now lets look at all ferrari results that year.

Okay Badoer had not raced since 1999 but he had been test driver for the 2,000's and done thousands of miles every year up till 2009 so he wasn't comletely rusty, but he certainly looked like a civillian. He may be a grey area but then there is fisi.

Fisi had been racing in F1 since 1996 and had been racing for force india up till Monza and had at the previous round gotten their 1st ever pole, points and podium so he certainly wasn't out of touch but he could not score in it either.

Massa in 2008/9 was one of the best drivers in F1 at that point IMO and ferraris golden boy at the time (how times change), and his results were not much of an improvement on Raikkonens in the 1st half of the year.

So this all shows it was a dog of a car and a real handful, yet he got their 1st podium at the traditional drivers circuit.

After Massa was out I believe he could then get free reign a bit more over the car as the new lead driver and then ferrari really was carried by Kimi back to some salvation with a run of 4 podiums with a win. Plus a further 2 point scoring finishers at the end of the year. Despite them no longer developing the car.

I would say he was very motivated and driving that car to positions few other drivers in the world could have gotten it to. I don't think 2009 can be used as a reason to say he wasn't that great or his motivation wasn't there. I think he put in a blinding performance that year.

what are your opinions on his 2009 season?

Contributor
I thought he was probably the 3rd best driver in 2009, after Button and Hamilton. A good season overall and unfair that he wasn't retained in 2010, but that was decided by his 2008 performance and his salary.

Contributor
I think the 2009 season is very underated, and I would rate it above Hamilton's. In a car that wasn't developed, he managed to win a race, score a string of 4 podiums, and finished behind 1 point behind Hamilton who had the second fastest car in the second half of the season.

The team was quite baffled on how he got the most out of the car, he also made a statement that. "Once the team listened to me and made the changes I wanted, the results got better".

Valued Member
People inside Ferrari who have been interviewed subsequently have said that Kimi's unwillingness or inability to lead the team effectively was a problem, so I don't think it's entirely a myth. Whether it really is as important as all that, remains to be seen. Certainly McLaren thought for many years that it was worth keeping him on.

Anyway, here's his qualifying performances in the 2009 car. Above the line is Kimi quicker, below is him slower. Badoer was so slow in Valencia he's off the chart. 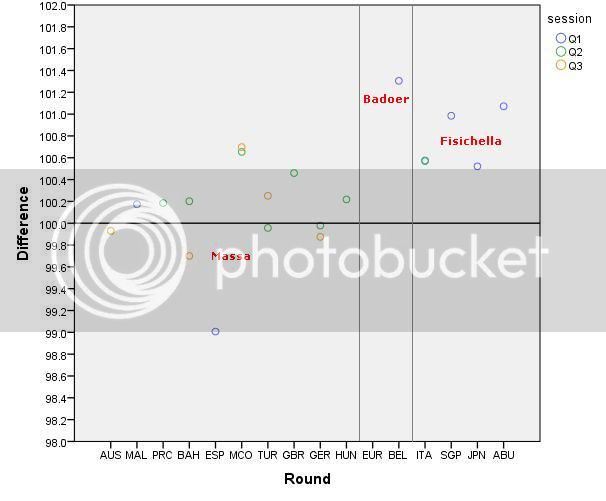 Valued Member
I think Kimi's 2009 season was very, very good. I don't take your point about Monaco because Ferrari were 3 & 4 (and it won me the Fantasy League too

) and quite fast there, but his run from Hungary to Monza was special, and he really did embarrass Fisichella, who probably didn't so much wrong and is in Le Mans because of it!

Contributor
You've got to admit that Fisichella struggled in the Ferrari because he hadn't tested KERS.

But agree Kimi's 2009 season was probably better than Hammy's tbh. I really do think the critics didn't do him any favours.

Contributor
Wasn't he behind Massa on points up to the point where Massa had is accident?

tooncheese said:
Wasn't he behind Massa on points up to the point where Massa had is accident?
Click to expand


Also I seem to remember Massa had to lose a number of positions at the Spanish GP because a computer problem displayed that he had less fuel then he actually had. It's difficult to judge whether or not Massa would have beaten Raikkonen because do we use out opinions of him in 2009 (good, possibly great driver) or do we use our opinions now (ok but nothing special) because we don't know if the crash changed him or if it is that Alonso is just a lot better than both Massa and Raikkonen.

no-FIAt-please said:
.... or if it is that Alonso is just a lot better than both Massa and Raikkonen.
Click to expand


I hope that you are wearing your steel helmet!

Bill Boddy said:
I hope that you are wearing your steel helmet!


Haha, I don't believe it either but it is a possible explanation.

tooncheese said:
Wasn't he behind Massa on points up to the point where Massa had is accident?
Click to expand

At the time of Massa's crash

Someone mentioned he was doing better than HAmilton which he was until BRazil. I think the problem with Kimi was Luca felt he showed a carefree attitude and was looking for a leader in Kimi and did not find it especially when the team were in dire straits early in the season. When Kimi turned up you did not know what to expect. At drivers track like Spa and Monaco it would be the old Kimi but at other places you were scratching your head thinking where was he .
Malaysia is a good example of somehow him agreeing to switch to wet tyres on a bone dry track and absolutely shredding them in one lap but surely a man being paid $50m should be able to make that call about the tyres he was going to use . Some said it was Schumacher who suggested this but its hard to believe that Kimi agreed to it !

Valued Member
No steel helmet needed, Alonso is better than Massa and Raikkonen, its a complete no brainer. Kimi and Felipe can be fast on their day but Fernando is consistently quick. That's why Ferrari gave Kimi the boot at the end of 2009 and employed Fernando.

Anyway, I digress from the point of this discussion.

Personally I think Raikkonen, at least in the second half of the season was a match for anybody and better than Button (who's abilities in 09 I don't massively rate, although since then I think he's become one of the very best.) Maybe winning the title made him less eager, in 2005 he could drive stupendously fast at every race and come back from bad results to do it again and again. A match for anybody.

If finally achieving the ultimate goal took away his hunger, a break - and subsequent fall in stock - could well rejuvinate him.

EvilWhippet said:
Personally I think Raikkonen, at least in the second half of the season was a match for anybody and better than Button (who's abilities in 09 I don't massively rate, although since then I think he's become one of the very best.) Maybe winning the title made him less eager, in 2005 he could drive stupendously fast at every race and come back from bad results to do it again and again. A match for anybodyIf finally achieving the ultimate goal took away his hunger, a break - and subsequent fall in stock - could well rejuvinate him.
Click to expand