Given its the Spanish Grand Prix this weekend, we are all reminded of the brilliant final corner that was lost in 2007 when the ludicrous chicane was added to the track. Here are some other corners that have been lost - either through circuit revisions, or removal from the calendar.

Osterreichring - Bosch Kurve: The most challenging corner on one of racing's most beautiful circuits. This long right hander did not have any run off (until 1988, after F1 abandoned it) and was approached at 210 mph with the fastest cars in qualifying. I can't recall any major crashes here, however the sight of 1000 hp cars tacking this beast of a corner was something special. The corner currently lies under a pile of dirt, having been removed in the 1996 rebuild to now the Red Bull Ring.


Silverstone - Club Corner/Bridge Corner: The old Silverstone (pre 1991) was a series of fast kinks with little run off, but lots of satisfaction for the drivers. Club Corner was the second of the ultra fast right handers, following the fast Stowe Corner. Both were taken at over 150 mph on a real hot lap. The loss of Club in the 1991 rebuild was a sad day, however fans were greeted to another great corner: Bridge. A blind approach and turn in at 180 mph was one of the best sights at Silverstone. The addition of the Abbey chicane in 1994 did neuter this corner somewhat, however it was always discussed. The corner now lies dormant, having been "retired" following the 2010 reconstruction. 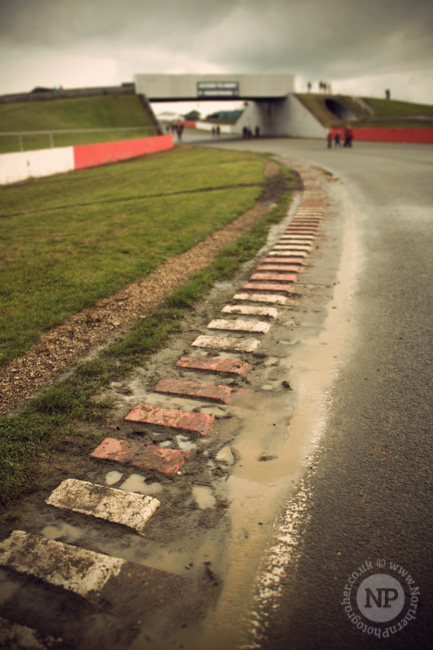 Mexico City - Peralta: The fast banked final corner was one of the most challenging corners in F1, even with reduced banking in 1992. It was the sight of Mansell's epic pass on Berger in 1990 and Senna's big roll in 1991. One of those corners that the drivers both hated and loved at the same time. Now its a flat shadow of its former self, destined not to be used if the Mexican GP does indeed return in 2015.

Kylalami - Crowthorne to Sunset Bends: The old Kyalami was a short track but contained some of racing's most reveered corners. The first few corners from Crowthorne to Sunset was a challenge to any driver in any race car. The downhill run into Crowthorne was a haven for last of the late brakers. The following 2 corners, Barbecue and Jukskei sweep were right on the limit, 155 mph with no grip. A real challenge to perfect. Sunset Bend was a long right hander that rewarded accuracy. Sadly its the only one of these 4 famous corners remaining, houses now covering the other 3.


Spa - Eau Rouge: Yeah I know its still there, but its no longer a corner. The "real" Eau Rouge was a much tighter version, with no run off at the top. The drivers would aim at a wall they could not see.


Suzuka - 130R (the original): The current 130R is a shadow of its former self. The old turn was much tighter, blind and with no room for error, as Allan McNish demonstrated. This corner was a special moment of the season. The remodelling of the corner was a travesty, its not really that hard anymore.

to think of what they've done with the Osterreichring...
Frankly the assassinated Mozart. Or something.

The old last corner of the Barcelona circuit would be a candidate for corners we'd want back.

Contributor
The Karussell on the Nordschleife.

Contributor
I'm with Johnny Carwash, the Karussell with modern downforce, that would be something.

Contributor
Villeneuve at Imola. I would have said Tamburello, but for safety reasons that doesn't seem possible. Although it would be probably flat-out in a modern car, the current travesty that has replaced it stifled racing at the venue for years, not allowing the possibility of passing at the Tosa hairpin. Si while it's not the most challenging corner in the world, for the sake of racing, I would bring Villeneuve back.
(Just as a side-note, they've removed that awful final chicane at Imola; so now it's just a flat-out run from Rivazza 2 to Tamburello).

Valued Member
Turn 8 is a classic killed long before it had a chance to become a real classic.

The chicane at Magny-Cours is sadly missed (Imola?)

Unpopular opinion - the back section (Turns 18-24ish) at Valencia would be nice. Attach it to the end of Abu Dhabi, maybe.

Just airlift Istanbul Park to a patch of farmland outside Lille, let's be honest.

Calling them "corners" might be pushing it, but the banking sections at Monza must have looked fairly daunting to say the least...

So many good circuits gone, let alone corners. I'm going to go ahead and nominate the esses at Watkins Glen. After seeing the corner in person (from afar, as the track was closed for the winter) the elevation change is just unreal.

Contributor
Tarzan at the (by me, anyway) much-lamented Zandvoort. Off camber and made for great passing opportunities, providing the driver had the cojones.

Definitely so, yeah. Click on any link to do with past dutch Grand Prik and you'll see plenty of brilliant (and not so brilliant attempts) overtaking action at Tarzan.

Contributor
Turn 2 from Interalagos, really wide banked corner, with the only run-off being a grassy bank. With ground effect they were pulling 10g!

Burenville, Masta Kink, and Stavelot are all fearsome corners, and one after the other (albeit seperated by huge straights) at the old spa which all should have been preserved.

Tarzan has been preserved during the renovation of Zandvoort, just not in F1 anymore. But it is sad to see so many great circuits gone due to the changing layouts for safety's sake. Yes I understand safety is much more important, but its just sad to see them go. Not sure how many circuits today we will be able to look back on like this. ****ing Tilke.

More run off areas, corners being modified to less challenging even though the cars can handle the corners much better than days before.

Cars can't even race in the rain anymore otherwise it will get red flagged or be behind a safety car. Look at Fuji 2007 compared to Korea 2010.

Korea 2010 changed the whole scenario for wet races which is a damn shame.

I 100% agree with that. There were some things that had to change for sure, but not to the scale at which it has. There is almost no risk in Formula One anymore. I'm not talking about the risk of injury or death, but rather the risk of your race being over if you put one wheel wrong. Nowadays, too fast entering a corner you go wide onto the tarmac runoffs and lose maybe a couple of seconds. In the past, you either lost your race or lost a minute in the pits. As for the rain, what the **** are the full wets for these days?!?!?!?!?

Memorable corners that are on the current calendar, and thus not lost:

Grand Hotel Hairpin and pretty much all of Monaco
Wall of Champions in Canada
The Silverstone ones I guess
Eau Rouge and some other corners at Spa
Parabolica, the Lesmo curves, and Curva Grande at Monza
Senna S at Interlagos

Suzuka is a great circuit as well, just doesn't give us any memorable corners with the death of 130R.

This gives us 7 memorable circuits out of 19.

The Ostkurve chicane that was used in the 80s (the left-right flick where Piquet and Salazar had their ding-dong) was quite spectacular...