Its all gone very quiet on the Briatore front, hasn't it? Having made a song and dance about how he didn't have a life ban from Formula One and he could return, as Pat Symonds has, in 2012, it seems strange that Briatore hasn't washed up in the sport.

So what is going to happen? The rumours of Mark Webber to Ferrari suggest that he might be involved in that team next year - are Ferrari going to make Stefano Domenicali the scapegoat for their failure to win the title and bring in an Italian three-time Constructors Championship winner?

Or is Briatore simply a persona non grata within Formula One as he is within football? Do FOM believe his return damages the brand (for no great payout).

I, personally, believe we have not seen the last of him.
Click to expand

Contributor
TBY - You do realise by creating this thread you've given FB the perfect oppotunity to print THAT picture again don't you?

Flavio is like a bad penny and will always resurface somewhere but I have my doubts about it being Ferrari. I think like Harry Rednapp taking the England job despite nothing being proved it'll be concluded he'll just be a bit too dodgy for the brand.

I actually expect Flavio to take up his job of managing drivers again and I think the delay may have come from the fact he's probably grooming the next lot of young drivers right now. I do think you're right though that before long he'll be back in the paddock steeling screen time again.

I certainly hope that's not the case. Briatore is a shady character that deserves to be forgotten and personally I think F1 is much better now with him gone. Some people love to hate Ferrari, I just can't imagine what will happen with Briatore on board. They will lose a lot of fans for sure (including me). Just the thought of it makes me feel

Valued Member
I'm torn over Flav. He did a few things he shouldn't have, some of them really rather bad indeed. But he was opinionated and passionate. Horner, Whitmarsh and Domenicali are so boring as to be virtually invisible.

Contributor
Flav's one of those people you love to hate, but you can't deny that the man isn't passionate about the sport. Just like must people in the world you have two sides to yourself, Flav's a big character like Ron Dennis and i do think some people miss him in the paddock. Maybe if he came back on less money and keeps a low profile and not get involved in too much contraversey, i'd like to see him back.

Nah, just live and hope really. But it'll never happen as he's not the type to do what i said.
T

HammydiRestarules
There's a difference between sharp practice (or being good at stretching the margins of the task you're set) and outright cheating and when it comes to the definitions of those Ron Dennis never cheated in that in so doing he put one driver (plus spectators and marshalls) at risk when he accepted some Ferrari paperwork, as opposed to Briatore who coerced NPJ into the Singaporegate incident that could realistically have turned really ugly on track.
One (RD) was a paperwork exercise, the other (FB) risked real peoples' lives.
I see a difference, ethically and morally.
I'd accept RD back in F1 but not FB.

HammydiRestarules said:
Flav's one of those people you love to hate, but you can't deny that the man isn't passionate about the sport.
Click to expand

Is that what you meant or was the double negative an accident?
T

For the record my previous post outlined my opinions of how I considered the incidents mentioned from public statements and were not intended as statements of fact about matters of which I can have no knowedge..

Contributor
I know why FB keeps posting that picture now!! FB clearly stands for Flavio Briatore and it is misguided self-promotion! (I don't buy that FatBloke red herring he has thrown us in the past)
T

ExtremeNinja said:
I don't buy that FatBloke red herring he has thrown us in the past
Click to expand


sounds a bit sizeist if you ask me, might be something for the mods to look at?

Mind you, if he looks as fit as his avatar

Check the usernames thread and you will see that FB is an abbreviation of FatBloke. I'm not sizeist, or fattest. In fact looking at the photo FB keeps posting of himself I would say that he is fattest. Sorry, couldn't resist. Better get back on topic quick as I feel I'm on unstable ground here.
M

Contributor
roadie-- a "paperwork exercise"??!! It resulted in a $100 million fine!

Hopefully neither individual will ever darken the door of F1 again.
M

Contributor
I am not a one to believe in conspiracy theories but I honestly think that Ron Dennis was innocent of any wrong doing, I would rather have faith in him than that fascist Max Rufus Mosely any day of the week..

But maybe I should save that for the Ron Dennis thread..

HammydiRestarules
Are you serious what you said about that womanising bastard Flavio Briatore?

Did you not read what Nelson Piquet Jnr said about his ex boss " He knows absolutely shit about F1!"

All Flavio is interested is doing backhanded deals where he earns from being a team manager and at the same time take 25% of a drivers pay...Renault did not have a problem of it when they were successful with Alonso until he started to take short cuts and it seriously damaged their brand

He is only loved by Alonso and Webber who both know Flavio will give them what they want a decent F1 seat which is a small price to pay for 25% commission... all the other drivers have been treated like pawns in his driver management policy and not really considering their careers so as long as he earns 25%

Flavio was only interested in the glamour of the sport with babes and celebrity status and leaves the track stuff to the engineers like Brawn, and Symonds
M

Contributor
I'd rather let captain hook give me a rectal examination than see Briatore back in F1...

Contributor
He's got a special attachment for that.

Valued Member
Here's a picture to get the tongues wagging... 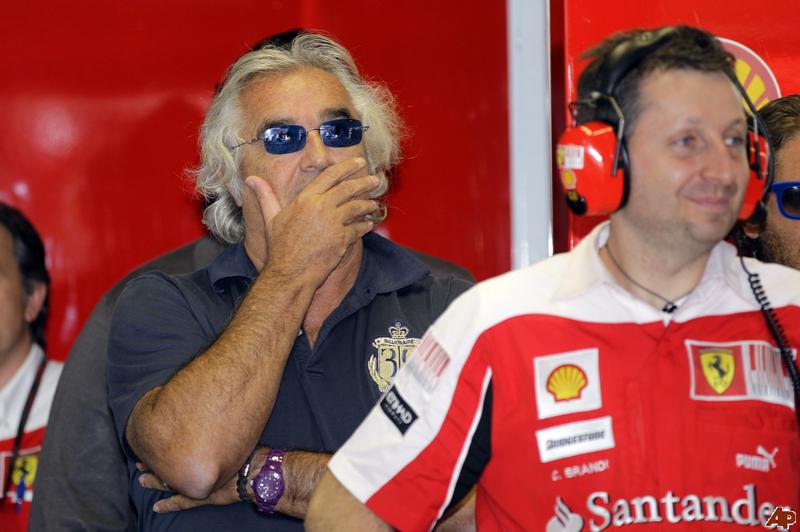