After its 70th birthday celebrations F1 now moves on for yet another glorious Grand Prix in the newly independent country of Catalonia..........what? It's not? Ok. After its fake 70th birthday celebrations F1 now moves on to the wonderful city of Barcelona in the plague ridden country of Spain. Unfortunately it will put a delay on the season as all the British based personel who attend the race will have to self-isolate for 14 days on their return. I mean there is no way they'll be able to get round that one is there?

Spain is notorious for being a boring race due to all the testing they do on the track and the data they get. Lucky for us and "the show" they weren't able to do the testing their this year due to the high level of people either fighting for their life or falling over and dying with mutated bat disease. Good news for F1 eh? The draw back on that is the Merc cars are roughly around 20,000 light years a lap in front of the rest of the field. However the baking heat might give us some dodgy rubber for Verstappen to jump on and shake that up who knows? If not we can always enjoy the battle for 5th which, as Sky like to tell us, is very exciting.

Local boy (kind of) Carlos Sainz will be hoping to score big in the revived McLaren and to get the better of current wonder kid Lando Norris. The other local hero Fernando Alonso will most likely pop up our of his disinfected sterile bunker to come remind us that he'll be back in F1 next year, Carlos is better than his results suggest and that Renault will be taking on Merc next year.

Spain will probably bring yet more speculation on whether Alex Albon will get to stay in the Red Bull seat. Albon will either qualify well and crash, which will make everyone question his race craft, or qualify crap, come back up through the field and get people saying "if only he could get his qualifying together". The victim of all this last year was Piere Gasly who is currently having a career and media persona turn round and stringing together some great and consistent results. I expect this to continue as well because the guy is happy at the moment and his junior career shows his best stuff comes out when he is comfortable.

Ferrari will most likely continue to face a nightmare with LeClerc maybe pulling out an unlikely result. Sebastian will continue to chug round like me at my old job in that last month when I'd handed my notice in. I mean what was the point? Alfa Romeo will be there too but we'll probably not notice. George Russel will probably do at least three things during the weekend which will make people say "I would love to see what he could do in a competitive car". A Haas will crash after some sort of brake failure and Renault will be either feast or famine.

It will be interesting to see whether F1s only covid victim Sergio Perez will return. If I'm the Spanish authorities I wouldn't let him in. If he doesn't return then the Nico Hulkenberg love in will continue without much substance. It's very similar to the time Nick Heidfeld replaced Kubica last minute at Renault and people were actually putting bets on him to win the title. Everyone seems to love an old dog come back. However I always think of the words of the late great Joe Strummer - "if you've been trying for years we've already heard your song"

So that's my little round up of the race to come. Feel free to expand it with better information than I can give. I hope we all enjoy the multi-millionaires racing round oblivious to a world pandemic in machines that are physically destroying the planet. Enjoy.
Click to expand

Contributor
It’s going to be in no particular order for the podium Bottas, Verstappen, Hamilton.

RasputinLives said:
the British based personel who attend the race will have to self-isolate for 14 days on their return. I mean there is no way they'll be able to get round that one is there?
Click to expand

Yes, the British personnel will be allowed to drive to Belgium to check their eyesight.

what happens to sky f1 team or anyone apart of the F1 Bubble who lives in England, as they are in Spain right now. will they have to self isolate on their return to england because if they had to they will obviously miss Belgian GP. or do they have spend their week off in Spain & Belgium. to be available

F1Brits_90 said:
what happens to sky f1 team or anyone apart of the F1 Bubble who lives in England, as they are in Spain right now. will they have to self isolate on their return to england because if they had to they will obviously miss Belgian GP. or do they have spend their week off in Spain & Belgium. to be available
Click to expand 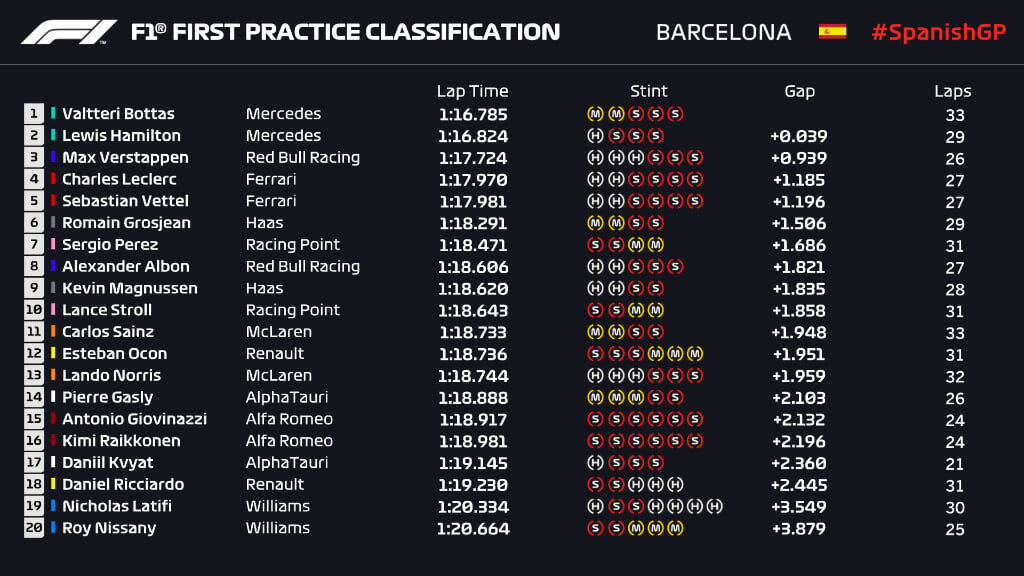 Contributor
A full second clear in FP1. That's when they usually sandbag!

Ferrari either low fuel running or their car is specifically designed for the test track.

we have a bit of optimsium as they were a full second clear in qualifying. we know what happened

Contributor
If our only hope is that the tyres are basically chewits that have been left in the sun then the sport really needs to look at itself pronto.

Premium Contributor
You can buy bags of them in Ferrari F1 outlet shops, they are little rubbery bags of sweets / candy. They have a rather burnt flavour. I wouldn’t recommend them.

Staff Member
Are you sure those aren't just bits of rubber from the tyres Titch? 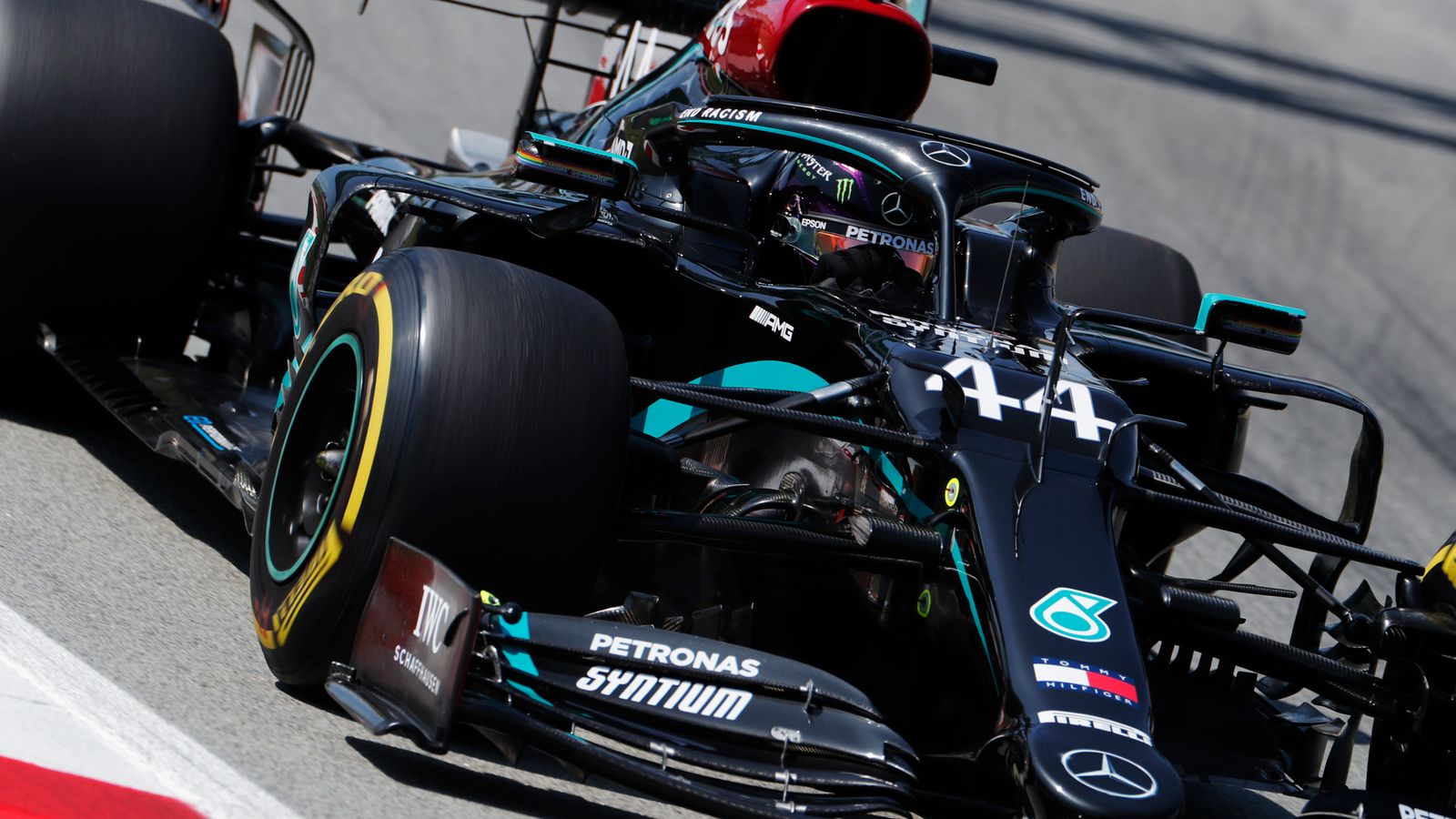 Lewis Hamilton hit form to top the timesheets ahead of team-mate Valtteri Bottas in second practice for the Spanish GP.

It also should be taught in schools as a prime example of a journalist trying to make something completely uninteresting sound interesting.

Valued Member
New chassis for Vettel and he's matching le Clerc. Who would have thought it?

Contributor
It's not the old 'my chassis had a hole in it' line is it? Worked against Webber I guess.

Staff Member
Chassis' should be limited like other components.

That would stop them riding the kerbs.

Staff Member
Premium Contributor
If the kerbs were as high as the average British Road traffic calming scheme and there was a bed made up of 300 tons of finest gravel waiting for them if they strayed off line then they would never leave the tarmac in the first place. 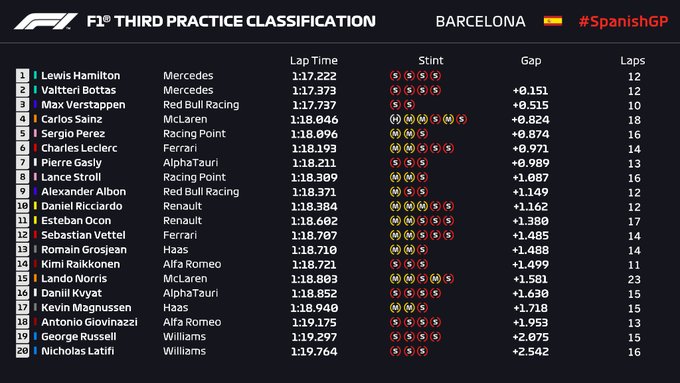