Contributor
Bernie is the CEO of FOM and controls the rudder on F1 and its future. When he goes it is going to leave a black hole sized vacum in F1. The big question is who will take over as CEO in Bernies place ?

Earlier this year he tipped a woman to replace him at the helm of the sport in 'three to five years'
At 81 years old you have to assume this wasn't just a flippant comment and he is already grooming his replacement.

• Lawyer Sacha jane Woodward-Hill a curent board member and director at FOM.

• Judith Griggs senior executive of Allsport management, who deal with advertising within F1.

• Michaele Mouton currently in charge of the FIA's women in motorsport commission.

Who ever lands the role I just hope the transition is smooth and not forced due to Bernies ill health or sudden death. Hopefully he will retire and hand things over sooner rather than leaving it until its to late.
M

Contributor
Attila the hun would be more flexible.

Contributor
Its going to be Flavio isn't it?

Contributor
The whole issue here goes back to Max selling out F1 to Bernie, I'm sure the alleged 300 Million GBP backhander had nothing to do with it. No CEO, if doing their job properly (and legally in many countries), should be focused on anything other than profitability. Unfortunately its the sporting aspect that taskes second place. 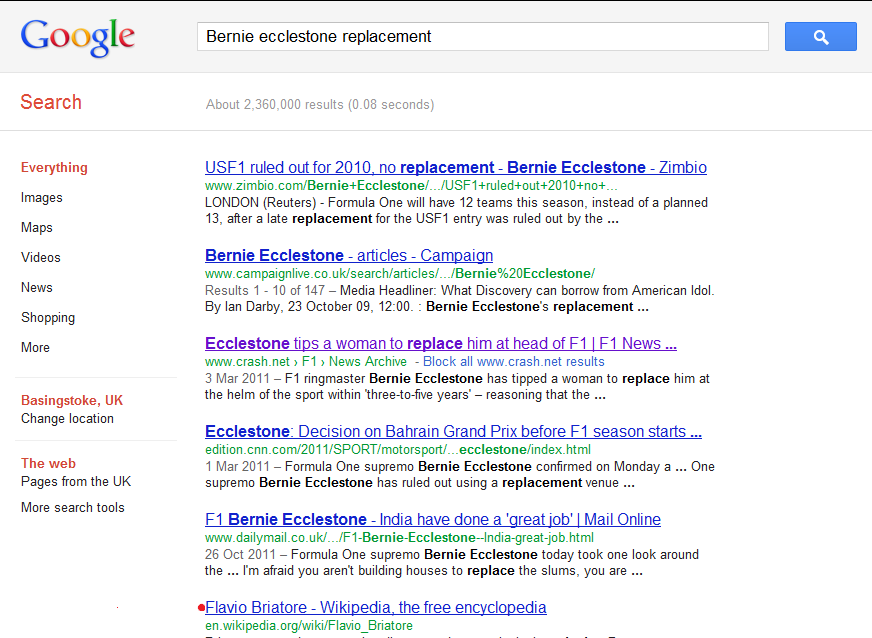 Contributor
Oh dear, I voted Tamara as a joke. The shocking news is that I wasn't the 1st. Anyone catch her new tv show? She's trying to show how hard her life is as a Billionaire Heiress.

I was watching it but fell asleep! But I think Schumi or some other legend driver would be awesome! Failing that Mr Tilke.. or Tamara

On a charge! I would rather have.... MARTIN BRUNDLE! He would be awesome!

Premium Contributor
I watched part of the Tamara Ecclestone show last night. She did not impress me, well, I suppose she did, more as an air-head than anything else. She seemed to be shocked that marketing experts thought that they knew more than she (a total novice) did.

Takes after her father in some ways, but will she have the flair for getting the dosh.

I thought about picking up that tenner you offered if Seb didn't win in Singapore, but the German ruined my chance of a free pint.

Contributor
If Tamara Ecclestone takes over from her dad, F1 will be in big trouble that girl would be a ruining the sport.

I'm tipping Michaele Mouton to take over, with her been part of the FIA i think she'd be a good replacement.

Greenlantern101 said:
...Earlier this year he tipped a woman to replace him at the helm of the sport in 'three to five years' ....
Click to expand

Around that same time, Bernie also suggested they should position lawn sprinklers around the circuits to water down the track at irregular intervals to spice up the competition.

Bernie's yogurt is long since past its "Best if used by" date. This is as nonsensical as demanding that F1 use only women drivers for the upcoming season.

More's the pity that the Murdoch/Slim/Agnelli deal to rescue F1 from CVC died on the vine.

Valued Member
Who was the America bloke being touted as Bernie's replacement? I think I wrote an article about him.
M

Contributor
Tamara would make all the drivers wear nice shoes.

Blog Zbod said:
...More's the pity that the Murdoch/Slim/Agnelli deal to rescue F1 from CVC died on the vine.
Click to expand

James Allen reported a couple of days ago sources at Bloomberg are saying the Murdoch/Slim/Agnelli/FOTA consortium's interest in buying F1 is only mostly dead. There's a big difference between mostly dead and all dead. They only have been temporarily distracted by the Murdoch involvement in the NOTW phone hacking ugliness.

Blog Zbod said:
There's a big difference between mostly dead and all dead.
Click to expand

I'm thinking that line comes from The Princess Bride. Not that I've ever watched it ...

Contributor
When you think of Bernie been replaced you just can't imagine it. He's been Mr F1 for years and it would feel strange for him to be replaced by somebody. You know it one of those catch 22 things where you want him to go but you can't imagine F1 without him.