In between all the back biting and sniping about budget caps and accusations of cheating the F1 circus rolls on with the second race of 2022 in the United States of America. We are back to Austin, Texas and the Circuit of the Americas, which has now hosted an American Grand Prix since 2012.

F1 racing and the United States has a chequered relationship. If you look back through the history books you will see that the Indy 500 was part of the Formula one World Championship until 1961, despite few (if any) F1 teams or drivers taking part. In 1959 the F1 teams did venture out Stateside and a race was run a Sebring in Florida. Included in the line up for this race were 6 American drivers, some of who rocked up in front engined Indy cars. Unsurprisingly these cars weren't very competitive, and the more nimble, rear engined F1 Cooper cars won the race.

I have taken this quote from the Wikipedia page which perhaps shows the very different attitudes to racing car design between Europe and the US at this time:

The night before practice began, Cooper Team Manager John Cooper, and his drivers Jack Brabham and Bruce McLaren, came across Ward at the hotel in Sebring. Ward, who had won the Indy 500 that year and would win it again in 1962, told the Cooper team members he was in Sebring to drive a dirt track car.

"Sure. And have you guys got a surprise waiting for you! Why, on every turn I'll blow you right off the road!" Ward gushed.

The Cooper team soon realized they could not explain things to Ward. He insisted, "I know what a Midget can do and I know it can take a corner faster than any of those sports cars you have in Europe. You might be faster on the straights, but when it comes to turns you just won't have a chance. Sebring's a lot of turns, isn't it?"

Well, to the Europeans' amazement, Ward's car made it through the technical scrutineering, perhaps a tribute to his Indianapolis reputation, but during the first practice lap, Bruce McLaren and Jack Brabham arrived at the first turn in their Coopers about the same time as Ward. The rear-engined cars sped through the turn, while Ward seemed to almost come to a stop. Afterward, Ward shook his head and said, "I've got to hand it to you. Those European buggies sure take corners fast!"

The 1960 race took place at the Riverside International Raceway in California, and a full compliment of F1 teams turned up. Despite this there was little interest from the locals and a spartan crowd mean that the race organiser had to pay the prize money from his own pocket.

For 1961 the race found a more appreciative audience at Watkins Glen in New York State, and race took place until 1980. Other locations in the US ran races during this time, with perhaps Long beach being the most popular. My main memory of Long beach was that the start was at the opposite side of the circuit to the finish, meaning that the race took place over 79.5 laps. I assume this is the only F1 race to have a formal half lap distance included?

F1 has bounced around various other locations over the years, some better than others. Detroit produced some good races, Phoenix in June, ironically named the Iceberg Grand Prix (after the sunglasses manufacturer who was the sponsor) when the air temperature was in the late 30's was something to behold. They moved the race March for the next couple of years, but still no one came to watch.

There was then a hiatus until 2000, when F1 bravely ventured in to the home of American singles seater racing, Indianapolis. The circuit was a hybrid of the famous oval and a twisty infield section and for six years F1 and the US public started a bit of a love affair. Then, in 2005, the Formula One teams showed their natural tendency to destroy anything good, with an unwillingness to compromise over tyre issues affecting nearly 60% for the grid, and we had the sad spectacle of all of the Michelin shod teams peeling off in to the pits at the end of the warm up lap, leaving six cars to contest the "race". F1 struggled on at Indy for another two years, but the damage was done.

From 2008 to 2011 the Formula One World Championship again did not have a race in the United States until the Circuit at Austin was built. It's development, it's relationship with FOM, and the local authorities, was quite rocky before the first race even took place, but we now seem to have a fairly stable home for F1 in a country which is not a natural partner of international sport. Long may it continue.

Here are the timings on Sky.

I'm going to see The Orb on Sunday night so will have to watch it when I get back. Don't suspect I'll miss too much though, Max Verstappen pole, Max Verstappen win, Max Verstappen fastest lap. God bless the FF button!
Last edited: 18 October 2022
Click to expand

here a question i was trying to figure out, why is qualifying 3 hours later than the race. like having qualifying at 5pm in Britain & race at 2pm

also indy 2005 if you discount the days where people have died at a grand prix, because for obvious reasons that is far worse. is indy 2005 the darkest day in F1 history. when for id say worst time greed overtook the sport, when bridgestone teams refused to install a chicane for driver safety . because Ferrari saw the pound signs when they were very uncompetitive, knew it was a certain victory barring disaster & Minardi, Jordan knew 1 of them would be guaranteed on the podium. it was case of

the fans & sport as long as we are successful
Last edited: 18 October 2022 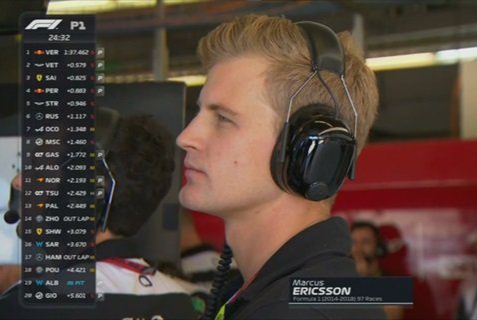 Riccardio out in Q1 has stopped being a shock. but ocon that seems terrible 18th i think 8 tenths off his teammate up in 7th

as well as great lap from Sainz. thought should mention Stroll & Albon. brilliant lap up to 5th, 8 tenths quicker than vettel. then albon taking arguably the slowest car into the top 10

only the 3rd time since Australia

Contributor
5 sec penalty for George Russell is a bit light for taking out Sainz.

i agreed til i saw the replay. then it wasnt as bad as I thought. Russell did take too much speed & lock up. but sainz did almost stand still as Brundle says after being stuck behind by Max

but the penalty was correct
Last edited: 23 October 2022

grateful for bottas. as this was turning into a cakewalk for verstappen until he spun it in to the gravel

very reckless driving there from stroll. abit reminiscent of russell & bottas in imola. you cant move to left & try to defend your position at that high speed.

Valued Member
Haven't watched it, should I bother?

FB said:
Haven't watched it, should I bother?
Click to expand

yes, but its a race of 2 halves until bottas spun on lap 20? absoultely dreadful. afterwards it was it was quite entertaining

FB i was surprised because that race director came highly recommended from the WEC. but they seemed to obsessed by the book. but didn't help the drivers werent happy with the inconsistencies of have them alternate

i thought it was harsh. but apparently it was because the wing mirror was broken. Haas have a point & i was going to mention in the above point the stewards have had poor day because he says he they were approved

Valued Member
I watched the highlights, it was still dull.