Staff Member
Premium Contributor
Penalty and sending off was unfortunate but can't disagree with it. Under the new rules it was hand ball.

The best thing about it was listening to the commentary team discussing the football history of both sides.

If you didn't already know, Jonathan Pearce grew up in Bristol and is a huge City fan.

i didnt know that about Jonathan Pearce very interesting. i cant comment on the commentary because i now sync up the Radio Sheffield coverage to the tv pictures. because i just prefer them to the commentary who have seen 1 before compared to every week for the last couple of decades

that was a alright performance for me, considering we just made consecutive FA Cup quarter finals its not to be sniffed at. as a month ago we seriously wonder if we would win any game & so 6th quarter final since our city rivals were last in 1. is to be applauded

but we werent at our best, but it very typical of what ive seen from us behind closed doors. we are very inconsistent with the tempo. even before the behind closed doors in early rounds of cups. we just cant replicate the intensity we used to play with but as many premier league players have stated, it feels like a training game. so maybe thats a thing. you saw why we are in mess we are in. it was back to times when we really needed to be better in final 1/3rd. as either making the wrong decisions, didnt get it on target, crosses to nobody. being on top in games without ever making it count. we shouldve beat fulham + west brom 4-0 & 5-1 instead 1-1 & 0-1.

we got lucky that VAR noticed it was player behind the goalkeeper that handled it. even despite my opinion that VAR has to go or be scaled back, it should work & it certainly had it good points. there are times when i been pleasantly surprised by the technology, gave it is due praise. but the cons heavily outweigh the pros. its the cause of more anger & problems. the forensic way VAR is being used, ridiculous offside decisions, Heung min son fraction of his heel last week being the last of thousands.

Contributor
cider_and_toast all you need is for Nigel Pearson to get you promoted, keep you up for a season, and then be replaced by Claudio Ranieri and you then win the premier league.

Staff Member
Premium Contributor
That would be unbelievable. (but never likely to happen)

Pearson wasn't in charge tonight, he gets officially announced tomorrow and yet somehow, the team that hasn't scored in 6 games and lost 7 on the bounce, suddenly wins 3-1.

As they say "Football, its a funny old game*

cider_and_toast said:
That would be unbelievable. (but never likely to happen)

Pearson wasn't in charge tonight, he gets officially announced tomorrow and yet somehow, the team that hasn't scored in 6 games and lost 7 on the bounce, suddenly wins 3-1.

As they say "Football, its a funny old game*
Click to expand

That must be the dead cat bounce staring already.

Johnny Carwash said:
cider_and_toast all you need is for Nigel Pearson to get you promoted, keep you up for a season, and then be replaced by Claudio Ranieri and you then win the premier league.
Click to expand

dont forget the season after you have to stab the manager you gave you the greatest season of your life. in the back & ironically suddenly start trying under someone called Shakespeare

i thought id post this from our rivals discussion on the blades board. because i love the ending, because i was reading this emotive speech & lists this horror for rotherham fans
- outright destruction of a football team
- costly bloodbath, that rotherham have no chance
- scarred for life
- rotherham begging for no moore
- tomorrow you meet your executioners

so im thinking their going to predict a battering. 5-0, maybe even 6-0. no what they predict is outright destruction of a tight 2-1 home victory. you really cant make it up. how in their wildest imagination where anything is possible. wednesday only win 2-1

what was even better they lost in 96th minute to rotherham. i cant remember a better football day all season. absoulte joy 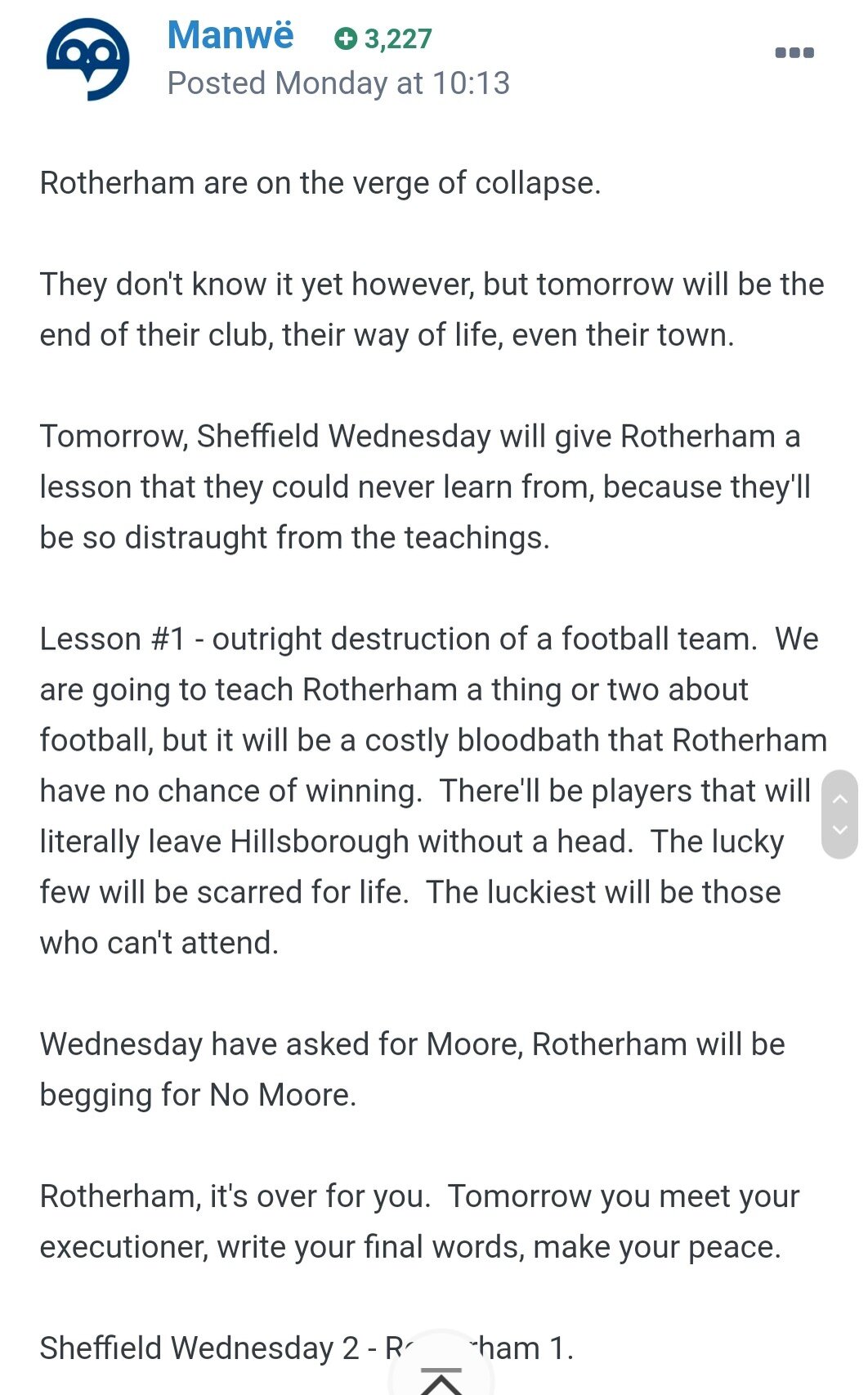 Contributor
It was all part of the plan to get him fit for our Euro 2020 campaign this summer. 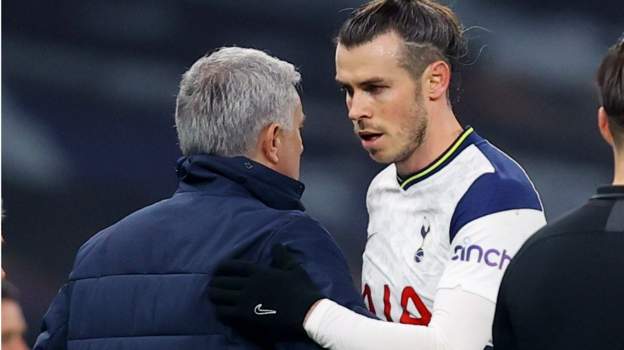 Gareth Bale has recovered from the "psychological scars" that led to his slow start to life back at Tottenham Hotspur, said boss Jose Mourinho.

By that I take it he means getting off his backside and playing football again after 12 months of sitting on his ass and laughing at Real Madrid, saying he was happy to take his massive wage and do nothing if they were not going to play him?

Contributor
His golf swing got better though cider_and_toast

Staff Member
Premium Contributor
Yeah, I think there were guys on the PGA tour who didn't earn as much a week to play golf as he did.

Contributor
Harry Maguire with a miss that is worse than Ronnie Rosenthal. 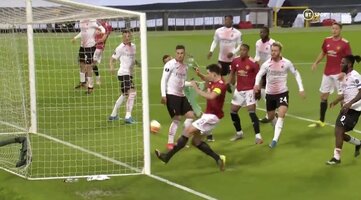 Staff Member
Premium Contributor
Clearly Wilder has gone because he's fallen out with the owners. Utterly pointless time to leave. Yes he's had a poor season but I don't know too many calling for him to go and would have given him every chance to get the Blades back up.

yeah the club has completely taken leave of their senses. its on a par with ferrari sacking leclerc last season. he was the only 1 making very best of a bad job

Staff Member
Premium Contributor
It makes no sense to me at all.

Listening to 606 on Saturday a blades fan rang in and echoed the thoughts of many that, while this season hasn't been great and relegation was a certainty, Wilder would have no problems rebuilding in the championship and getting United back up.

Look at Sean Dyche, he got Burnley promoted, then they were relegated, they kept him in charge and were promoted again with ease and ever since they've being doing well in the Premiership.

im sure ill be right next August but i just cant get into this Leicester game. its weird because ive seen end of Heath, Warnock, Robson, Blackwell, Speed, Adams, Wilson, Morgan, Weir, Clough & Adkins.

but this feels empty. alot like after gary speed tragedy