When my mind turned to the Spanish gp I was thinking that Fernando Alonso was of course the big name there. Then I tried to think of other successful Spanish drivers and I drew a blank. I can name other Spanish drivers of course, but not one who was what you might call successful. So I got auntie google to give me a hand and I was surprised to find that there hasn't been another Spanish F1 champion, ever, not even another gp winner which astounded me to be honest.

However Spain has had lots of F1 races at various different tracks over the years, indeed in 2013 they celebrated their centenary of hosting F1 races, yet apart from Fernando Alonso they haven't managed to produce an F1 champion. Then again they've never produced a winning team either, their only team entry being the HRT Team, formerly Hispania Racing and Campos Meta 1 (no, I don't remember them being called Campos Meta either). Sadly the team, started by a former F1 driver who had an unsuccessful F1 career in the 1980s, Adrian Campos, didn't last long and didn't make much of an impression on F1 in their brief stint from 2010 to 2012, though they had some decent drivers. The best result they could manage came in the Turkish gp in 2011 when Vitantonio Liuzzi finished as high as... 13th. Not even in the points, bless them. Even Daniel Ricciardo couldn't get them into anything like contention for a shoey. There was almost a second Spanish F1 team when in 2009 Joan Villadelprat announced his Epsilon Euskadi team, but they never actually made it onto the grid despite doing their best to get there over a couple of seasons. For one reason or another the FIA never granted them the chance to even turn a wheel in anger despite them having a team, a car, a budget, even a wind tunnel and solid plans in place to compete for up to four seasons according to them.

Google and I did some more digging then and I found that although we've had other Spanish drivers in F1 they really haven't done that well despite being in some decent cars over recent years, Carlos Sainz Jnr. just hasn't had the impact of his former team mate Max Verstappen, though many say he's his equal if only he'd been given the same chances. Pedro de la Rosa and Alfonso de Portago (mid 1950s) are the only other Spanish drivers to ever to grace an F1 podium. Marc Gene hardly shone in the sport and Jaime Alguesauri, who at that time was the youngest driver in F1, had a lacklustre time at Toro Rosso before he was dropped and that was the end of his F1 career. There were several other Spanish F1 drivers over the years but none of them really made much impact. Most didn't score a single point, one never even got beyond qualifying. Only Paco Godia who raced intermitantly in the 1950s managed a grand haul of 6 championship points. Back then points were much harder to get as we all know so he did fairly well, these days all you need is a 7th place finish and you've equalled his no doubt hard won 6 points. Emilio de Villota was entered for fourteen races over four years and only managed to start two of them which just shows how tough it was back then to even make it to the starting grid.

Maybe it is just a lack of interest by the country as a whole in F1 that has held them back, or perhaps it's a lack of money. Other sports seem more important to them like football, basketball, tennis, cycling and golf. They have produced some magnificent football teams and some fine champions in other sports over the years, they've done well in everything they take part in it seems. Everyone has heard of Alonso, also Nadal, Sanchez Vicaria, Sainz Snr., Ballesteros, Olazabal, and Garcia to name but a few. The Spanish football team have won the Euro's three times in all and in 2010 the World Cup as well. The Spanish Roller Hockey team has had even more success, they have won the world championships fourteen times and been second twelve times having done equally as well in the European Championships with fourteen wins and fifteen second places. So it's odd to me that a country of that size, and one that is clearly interested in a varied range of competitive sports, has had so little influence in F1 over the years.

There's no doubting that Alonso has been one of those characters that divides the fans. He made several questionable choices and moves in his career and I came to realise he's another one of those Marmite drivers, most people either like him or loathe him. However you feel about him he's currently the only winner of an F1 race in a country the size of Spain with the long F1 history it has. I still find that amazing.

To more current matters now. In 2018 your pole sitter was Hamilton and your podium was 1st Hamilton, 2nd Bottas, 3rd Verstappen. Who will be standing there this year? Daniel Ricciardo already has a 3 place grid penalty for his little incident in Baku with Daniil Kvyat, naughty Daniel. Based on last years results it's likely to be another 'exciting' Mercedes one, two result unless Ferrari can finally find that testing form which promised so much but has delivered so little so far.
Last edited: 30 April 2019
Click to expand

Contributor
Spain + motorsport = motorbikes. There have been numerous occasions when all nine podium positions across MotoGP, Moto2 and Moto3 have ben occupied by Spanish riders in the same weekend. They're mad for two-wheels, as are the fans. Alonso and Sainz are the exceptions, plus a few other lesser rally drivers - everyone's lesser to Sainz in rally (except perhaps Sebastien Loeb but he's French). Anyway, they loves them bikes in Spain they does.

I'll be there again this year in Stand A just on the inside of turn 2. Great views down the straight from our seats mid-way up, looking down on turn 1, turn 2 and left to turn three. The spot where Grosjean spun his wild way across the track last year is just out of view, but we heard it well enough and there's a big screen right in front. Stand A has a big grassy area below it, and is very close to the track at at the end of turn 2. Great for a lounge and a change from the seats.

My race weekend report will be the usual mix of gastronomy, alcohol and other nonsense with a bit of F1 thrown in. I expect a boring race and the best couple of days out for a while. Weather looks rather decent although not roasting, probably a good thing. Reckon the Mercs will sail away again and Ferrari won't maximise their chances. But even if they do will that be good enough? Hoping Max provides the spice wherever he can.

Contributor
Duh, why didn't I think of the bikes? Marc Marquez their multiple world champion for one thing

Contributor
Usually one of the dullest races of the year, which is mainly because of the terrible chicane they installed in the final sector stops cars following closely going on to the start finish straight.

Contributor
Maybe this year will be different. We can hope.

Contributor
The mini-straight after turn three, under the bridge and into turn four has seen a few passes over recent years - not many perhaps but a few. I was trawling through some old pics and found this from 2013 - Kimi in the Lotus taking Massa into turn four. Think it was lap two or three, I was on the inside of turn 4 on the grassy slope - not a good place to see much as the cars whizz by and out of sight. There is an ok General Admission spot on the outside of turn four that would have provided an excellent view of the Hammy-Rosberg crash and Grosjean's spin. It'll be rammed by 10am this year. 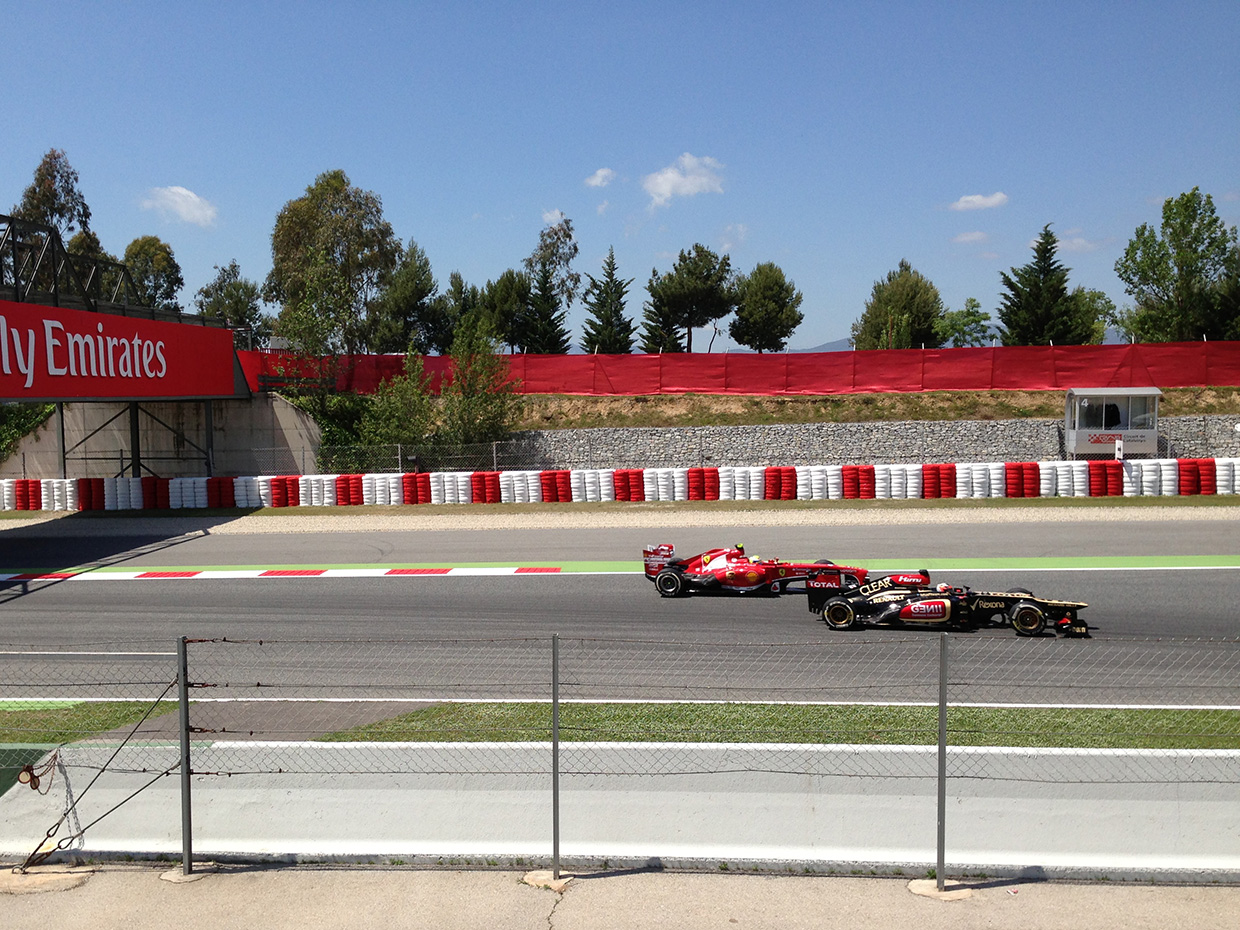 Il_leone said:
This is traditionally the worst race of the year because the cars are reliant on aero and the one place to pass is difficult to get close due to the last corner and being in the dirty air
Click to expand

without a doubt this will make China look like a thriller because not even F2 can make this track interesting. only interesting races i can think of last nearly 20 yrs
2001 Hakkinen DNF on final lap
2012 Maldonado Williams Fairytale
2016 Verstappen maiden win on debut & mercedes Meltdown

what could be entertaining is how are the incompetent ferrari mechanic going to cock up leclerc race this weekend after trying & failing in bahrain. then succeeding in China & Baku. (yes i know he crashed but it was the the wrong strategy from the off even before the crash)

Contributor
It can be a very dull race but we can live in hopes that maybe a well timed shower of rain or something livens it up a bit. This is usually the kind of race where highlights can be a blessing

Not paying Now TV for any of these. Highlights will be fine.
Next live race I watch will be 23rd June for Paul Ricard, in the hope that it isn't shite.

Canada used to be one of my favourites, but in these days of DRS, hybrid power units or whatever it just seems to have got dull. I still like Monaco though - but Barcelona-Catalunya ... eugh.

good point canada used to be the highlights of the season

Contributor
The race weekend is going to follow the same pattern with all the pundits saying that Ferrari were fast here in testing so they will be favourites.Mercedes sandbag until Q3.Mercedes then have a front row lock out.Ferrari are 0.3 behind in qualifying and everyone wonders were their pace has going.Mercedes have another 1-2 finish,Ferrari finish 3-5. Toto Wolff keeps saying Ferrari are faster than the Mercs.

Contributor
Or, this is a track that suits the Ferraris more than others, and one of the red cars at least splits the Mercs in quali.

Wishful thinking? Perhaps. The red team certainly have had problems getting their tyres switched on in recent races - and we are fairly sure that Merc were ‘bagging at the Barca tests - but, I think Ferrari did find genuine pace at Barca pre-season. This gives me some hope.

F1Brits_90 said:
good point canada used to be the highlights of the season
Click to expand

Couldn't agree more, it's sad how dull it's got lately.


vintly said:
Or, this is a track that suits the Ferraris more than others, and one of the red cars at least splits the Mercs in quali.

Wishful thinking? Perhaps. The red team certainly have had problems getting their tyres switched on in recent races - and we are fairly sure that Merc were ‘bagging at the Barca tests - but, I think Ferrari did find genuine pace at Barca pre-season. This gives me some hope.
Click to expand

I hope rather than believe that Ferrari will live up to their testing pace here.

Angel said:
I hope rather than believe that Ferrari will live up to their testing pace here.
Click to expand

Don't you mean you hope Mercedes put the bag of cement they were using during testing back in the car?

FB said:
Don't you mean you hope Mercedes put the bag of cement they were using during testing back in the car?
Click to expand

Contributor
Even if they do all have B-cars, the Mercedes B-car will be still faster than anyone else's I bet 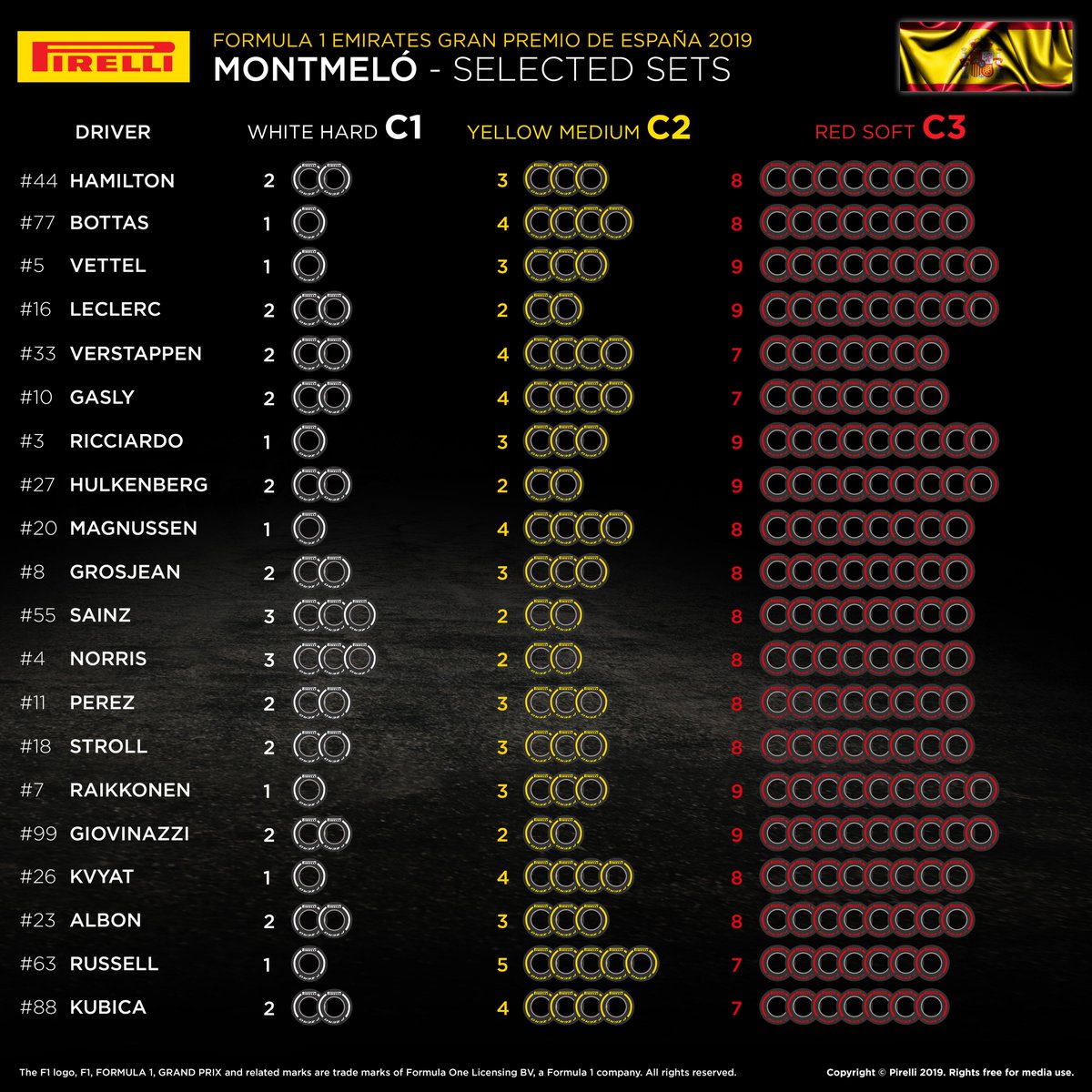