F1Brits_90 said:
good point but F1 has moved on from the mid 00s of the number 1 drivers & number 2 drivers.
Click to expand

And I think one of the biggest image issues in F1 over the last decade is this denial from team bosses that this situation doesn't exist when we all know it does.

If they just fessed up and said "he's our number one driver, and he's number two" then things like team orders would never have been such a problem.

Sorry chap but number 1s and 2s are how F1 works.
Click to expand

we might have number 1 & 2s but in september when it makes sense & it settled on the track now on performance back when in era i was talking about you knew in February that no matter how good a season Irvine or Barrichello had. they were forbidden for challenging for the title. i remember on F1 legends program that even Irvine feels his title challenge in 1999 was potienally sabotages internally because Ferrari didnt like the idea that he not Schumacher would be 1st ferrari champion for 20yrs

Contributor
Well firstly Eddie Irvine is full of bullpoo and secondly if it came down to a three way fight between Hamilton, Bottas and a none Merc driver then he would be shuffled out the way in the exact same way those others you listed were. It's the nature of F1. Team mates are only allowed to fight for the title when the team are so far in front that it doesn't matter.....and even then they got told not too!

As much as the press like to talk about it and Toto likes to talk in the media about it all, Bottas is actually doing the exact job Merc need him to do and the exact job Red Bull wish Gasly was doing for them.

Bottas and Gasly are not doing quite the job they should, the object is to appear to challenge the no1 but really covering their a

Contributor
I think Bottas has done that fine this season.
J

F1Brits_90 said:
good point but F1 has moved on from the mid 00s of the number 1 drivers & number 2 drivers. whether it is public pressure or doubling your chances but ferrari gone with Leclerc & Vettel, Red Bull had Ricardio & Verstappen. Mercedes had Hamilton & Rosberg they want 2 drivers & if 1 cant challenge for title then its pressure will mount for someone who can
Click to expand

Teams also know that "doubling your chances" can sometimes lead to expensive consequences. I'm thinking of Hamilton and Rosberg most recently, Hamilton/Alonso at McLaren and Senna/Prost. On the other hand, Schumacher/Barrichello was a pretty successful partnership and I believe Hamiltion/Bottas is similar.

Interesting stats:
Who is more "economical" driver in this season? 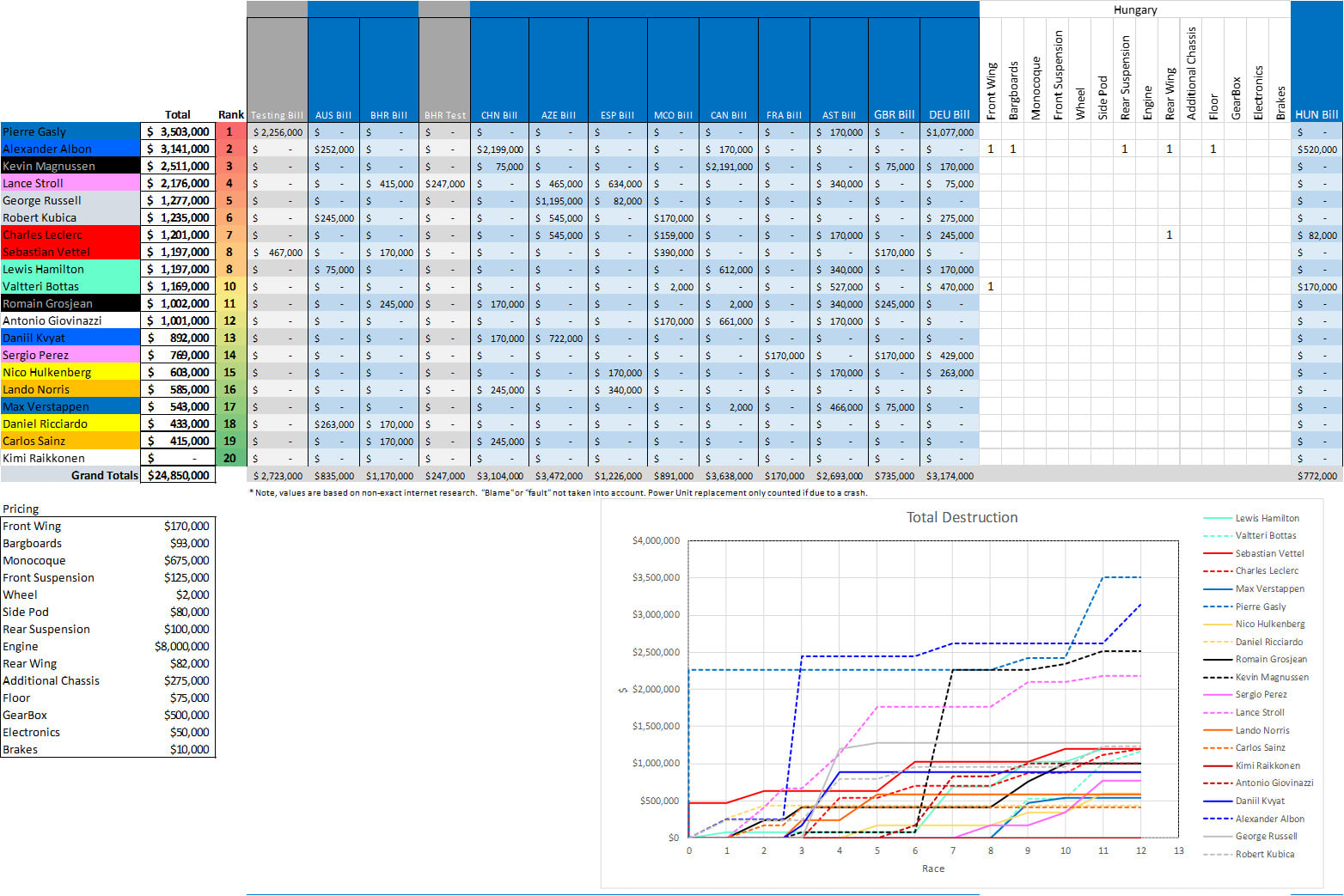 That is probably a chart that Gasly does not want to be leading.
J

Look at Kimi. My respect for him just keeps growing.

Premium Contributor
Great post again olegg -from the headline I thought ‘economical on fuel?’, but it was much more interesting than that!

love this chart, something ive never really thought of


Ruslan said:
That is probably a chart that Gasly does not want to be leading.
Click to expand

although when you take testing out of equesion then he goes 5th on 1.25m at least
Last edited: 8 August 2019

Well, I don't see how he survives his summer vacation, but I have been surprised before by F1 management decisions.
J

Ruslan said:
Well, I don't see how he survives his summer vacation, but I have been surprised before by F1 management decisions.
Click to expand

"Asked whether Red Bull may need to replace Gasly, Horner said: "Our intention is to leave him in the car to the end of the year.""

"Asked whether Red Bull may need to replace Gasly, Horner said: "Our intention is to leave him in the car to the end of the year.""
Click to expand

I can only conclude that they don’t think they have a chance at second in the manufacturer’s cup regardless.

I've heard "our intention is" before, the next is "that was our intention, but after consideration"

You have poles and wins mixed up there. Other than that, the comparison makes it hit home how much more dominant Mercedes' results have been and how disastrous Ferrari's season is in comparison. 5 wins to 0 really hurts.

Ruslan said:
Well, I don't see how he survives his summer vacation, but I have been surprised before by F1 management decisions.
Click to expand

he hasn't, he has been replaced by Albon, Gasly is back to STR

Publius Cornelius Scipio said:
he hasn't, he has been replaced by Albon, Gasly is back to STR
Click to expand

Well, good for Albon....shame for Kvyat, who really deserved it (the only driver besides the big 5 this season who has a podium).

At least Gasly will have a chance to work on his race pace at STR and see if it was a temporary issue.