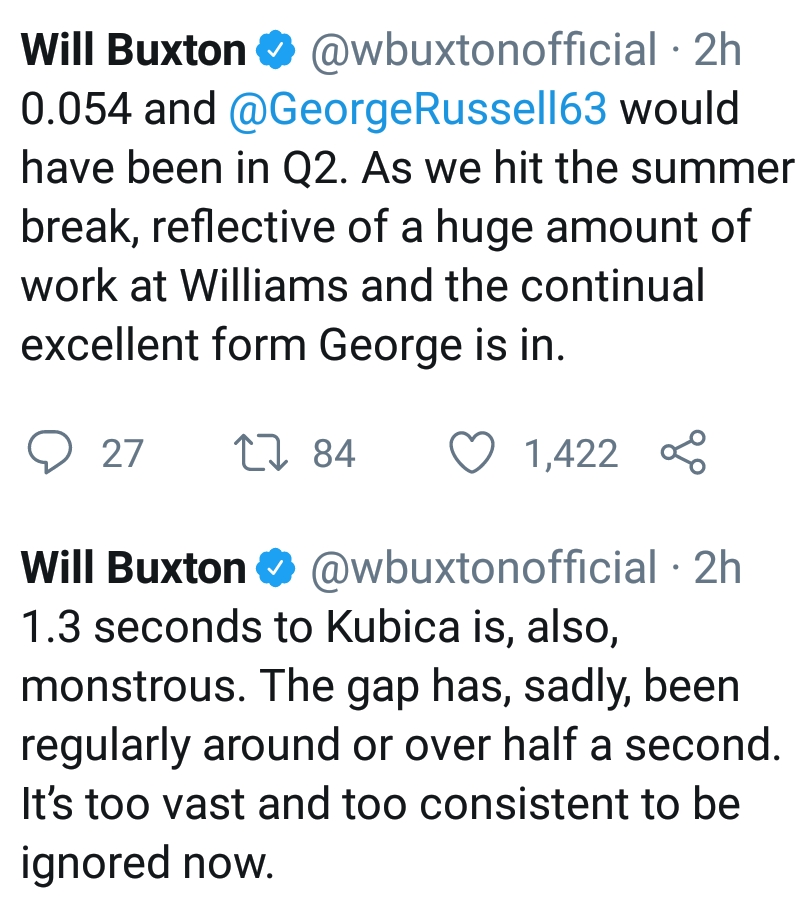 Angel said:
George Russell out qualified both Racing Point cars and Ricciardo!! They have improved that Williams, well not the car they Kubica, obviously.
Click to expand

Saw the interview of George Russell after the race. He clearly was stoked, and believed it was because they finally got the issues sorted out. I gather one of the problems was that they were not able to match the data from the wind tunnel with what was happening on the track. It appears that they got that sorted...so maybe we will now see the Williams moving forward for the rest of the season.

Hard not to like George Russell. He seems very nice and shows no attitude or ego.

F1Brits_90 said:
i know this is weird but i was giving driver of qualifying. it wouldn't be verstappen as good as he was it wouldbe to russell in 16th. what a job he did outqualifying both racing points & Ricarddo. so close to making it into Q2. on track where downforce is more important than power
Click to expand

Well, Ricciardo and Perez tripped over each other in qualifying....slowing both cars down. Ricciardo's fault. Stroll got held up by Giovinazzi, for which he was penalized for.

Yea, but he hasn't been getting very good starts lately.

Ruslan said:
Yea, but he hasn't been getting very good starts lately.
Click to expand

but hes been winning. leclerc & hamilton got fantastic starts but lost

Ruslan said:
Yea, but he hasn't been getting very good starts lately.
Click to expand

F1Brits_90 said:
quite amazing to think, considering how successful & highly rated verstappen has been over the last 3 years. that is his 1st pole position you wouldve thought guy like him wouldve had 1 before. but stunning pole lap on circuit i felt would suit a red bull, absoultely aced that final sector to find a quarter of a second on himself & tenth on bottas. as he was 0.12 up on himself but 0.061 down on bottas. but also thats Bottas luck at the moment. chance of a podium in germany crashed, hungary the lap of his life beats lewis & still 0.018 short of pole.

i know this is weird but i was giving driver of qualifying. it wouldn't be verstappen as good as he was it wouldbe to russell in 16th. what a job he did outqualifying both racing points & Ricarddo. so close to making it into Q2. on track where downforce is more important than power

Kubica 1.3 secs off russell. will he last the season & after some research i knew someone had something about kubica thats turned true back in feb & it was Radical F1 who took a bit of stick

I knew it from the start F1Brits_90 and Unless Claire is staying with Kubica in his Motorhome, She should fire him in Summer....

Contributor
Radical F1 Good to see you here my friend

So that's three drivers now who will be lucky to survive the summer break, Grosjean, Gasly and Kubica.

Not sure why but I get the feeling vintly is rooting for Max, just a hunch

Contributor
Angel my You Bet money’s on Hammy for the win, but it’s so good to see him get his first pole. Was it 2017 in Singapore when he put in that awesome quali lap only to be beaten by Seb, who’s pole lap was possibly one of his best ever, kissing the wall at least once and Seb couldn’t even believe it himself. It’s been a long wait since.

Max has had his numerous doubters, not least on this forum, I hope some of them are coming round now.

Contributor
Now he's calmed down some I am coming round to liking Max again. I was a big fan when he first came into F1, then he acted out and annoyed me with some of the things he did/said but now he seems to have settled down some more I am finding I am rooting for him again at times.

Angel said:
Now he's calmed down some I am coming round to liking Max again. I was a big fan when he first came into F1, then he acted out and annoyed me with some of the things he did/said but now he seems to have settled down some more I am finding I am rooting for him again at times.
Click to expand

that monaco gp FP3 crash has been the making of him because since then. since then he been alot more mature & lot more long term. i think points gained post monaco wouldve had max 2nd in championship. then his drives we will never know if max is over performing or gasly is under performing or both. but to be potential (worst case if he wins) 15pts behind bottas considering the start mercedes had. is nothing short of miraculous

Contributor
I think you're right F1Brits_90 . It does often take something pulling them up sharp to focus a driver's mind and make them grow up. I remember not liking Jenson Button much for a while, then he moved to Honda and had a really tough season which was the making of him in my opinion. Other similar things have occured with other drivers, that is just the example that came to mind.

Max needed to settle down and I'm glad he has, I also think his recent battles with Charles Leclerc has been good for him too. What you say about where he is points wise is true, it's a huge deal that he's got that close to the Mercedes drivers, just think how good it would be for Red Bull if they had two really good drivers. That is with a Honda engine of course, let's not forget that given how bad it was only a couple of seasons ago.

Well, a few thoughts on the race:

1. Hamilton great race....great race planning. It was actually nice to see a dual for the lead between two different teams that effectively went on for the entire race. Great job by Hamilton and Verstappen. His is my choice for driver of the day, having to take care of brakes and tires for the entire length of the race, and did a great job of it.

2. Verstappen: Great race. I do wonder if around 16 laps or so from the end, he overdid things when he ran a few laps as Hamilton's pace to keep him from closing. Was this a mistake in tire management that set him up to run out of tires at the end. Anyhow, great race, but driver of the day has to go to the guy who managed his tires/brakes the best.

3-4. Vettel/Leclerc: Made up the numbers.

6. Simply Gasly: End the race like 100 seconds behind his teammate. This means he was running an average of 1.4 seconds a lap behind his teammate. How can they continue to justify running him, when Red Bull is only 44 points behind Ferrari and taking 2nd in the championship will allow them to pocket another 20 million.

7, 9 10, 11, 12: Raikkonen, Norris, Albon, Perez, Hulkenberg: All good performances by these drivers. There was probably not much more than could have been extracted from the Racing Points or Renault. Norris looked particularly sharp, not sure why he fell back late in the race.

8. Bottas: A perfectly mediocre drive through the field by a perfectly mediocre driver. I think they should (and probably will) sign Ocon for next year. In the end, the collision was sort of his mistake, as he overcommitted in the fight with Hamilton and ended up falling back to the Ferraris. He was hit by the Ferrari, damaging his wing. But, he still had a change to shine...and shine he did not.

Silly season: As far as I can see, there are only 5 drivers at risk:
1. Gasly - who may be gone before Spa (and I think should be)
2. Bottas - who may be replaced by Ocon at the end of the season (and I think should be)
3. Grosjean - who again showed speed today. The question is, who do you replace him with? Who is better and available? Suspect he will continue with Haas in 2020.
4. Giovinazzi - I hope he is bringing lots of money or good ties with Ferrari, because so far, he only looks like an F1 driver out of the cockpit.
5. Kubica - has not put it together. I don't think it is because of his hand.

Right now, I see one driver clearly deserving of promotion: which is George Russell. Not sure there is a spot for him anywhere else.

Have Ferrari finished yet?