cider_and_toast said:
History books will claim that it was the Reagan doctrine that eventually forced the collapse of the Soviet Union through the economic and technological might of the US strangling the economy of the USSR in to submission.
Click to expand

Well, I haven’t done a survey of what people are writing now, but I doubt that many history books are claiming this. It is a popular political theory among certain elements. Not sure it carries much weight with most historians.

Beatles probably had more impact than the Hungarian GP, but it certainly helped.

Staff Member
Premium Contributor
Edited after feedback from our readers:

Contributor
It wasn't just Mercedes who had a bad race in Germany as we know, Renault had an unhappy time with neither driver finishing. Apparently their bad luck is continuing after one of their trucks crashed on the way to Hungary. They got the truck out under yellow flags, a safety car wasn't needed 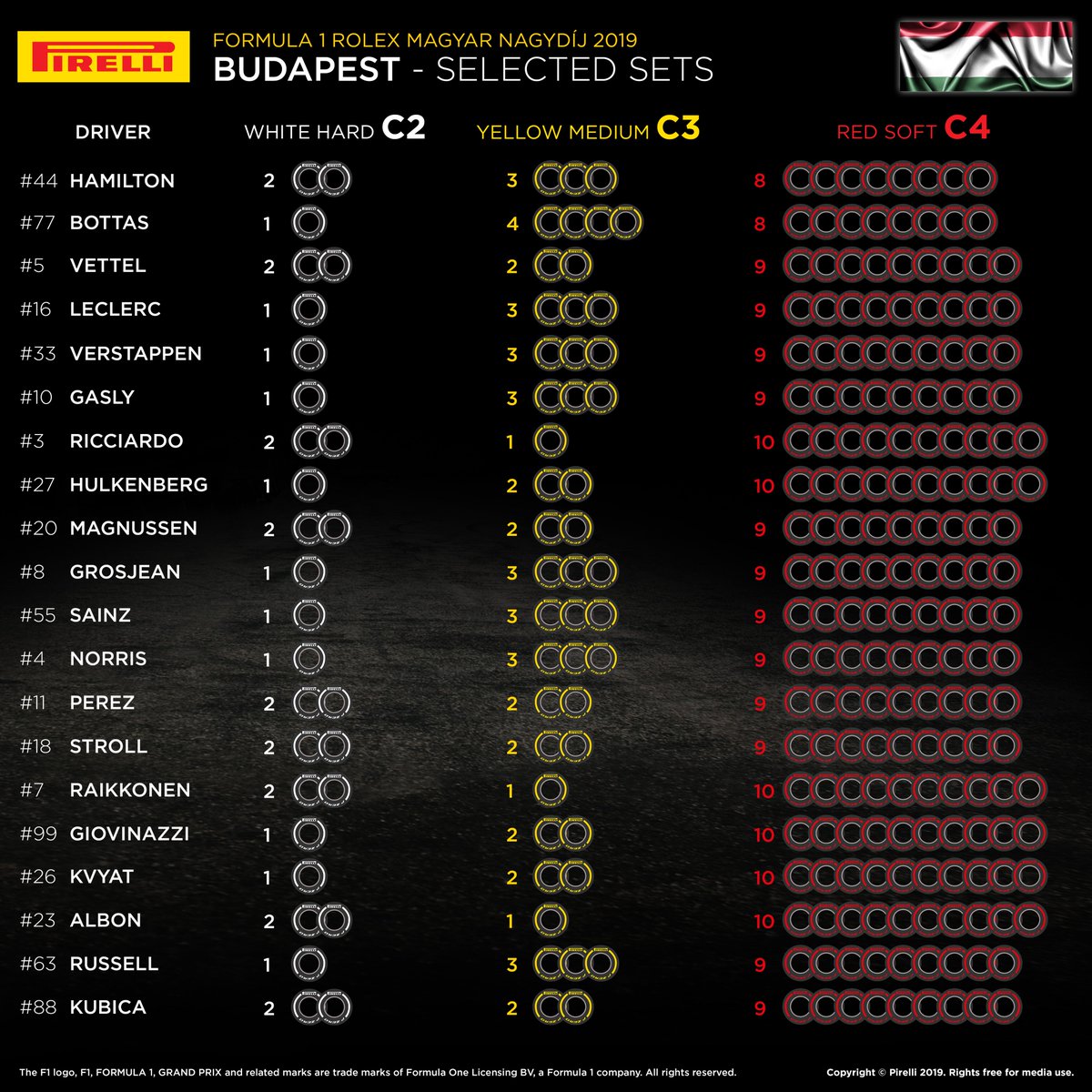 Boring track given its slow medium speed corners and there is no room to pass bar first corner if you dare to brake late like Riccardo
The wet races seems to mix things up a little . 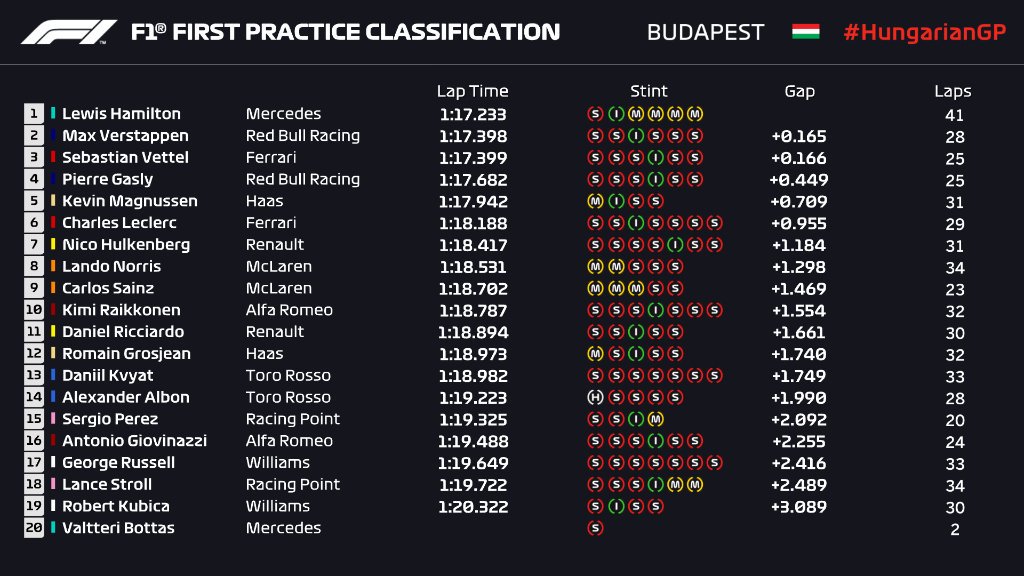 Contributor
No real running for Bottas, that's not going to help his situation. It was close at the top too, just 0.2 between 1st and 3rd and only 0.001 between Verstappen and Vettel. Then there is Gasly, enough said. Should make for an interesting qualifying if they continue to remain that close.

Contributor
I can’t remember, was it a good or bad race last year?

Titch said:
I can’t remember, was it a good or bad race last year?
Click to expand

Hamilton cruised to victory so if you like Hamilton it was a great win.If you don’t like him it was boring. 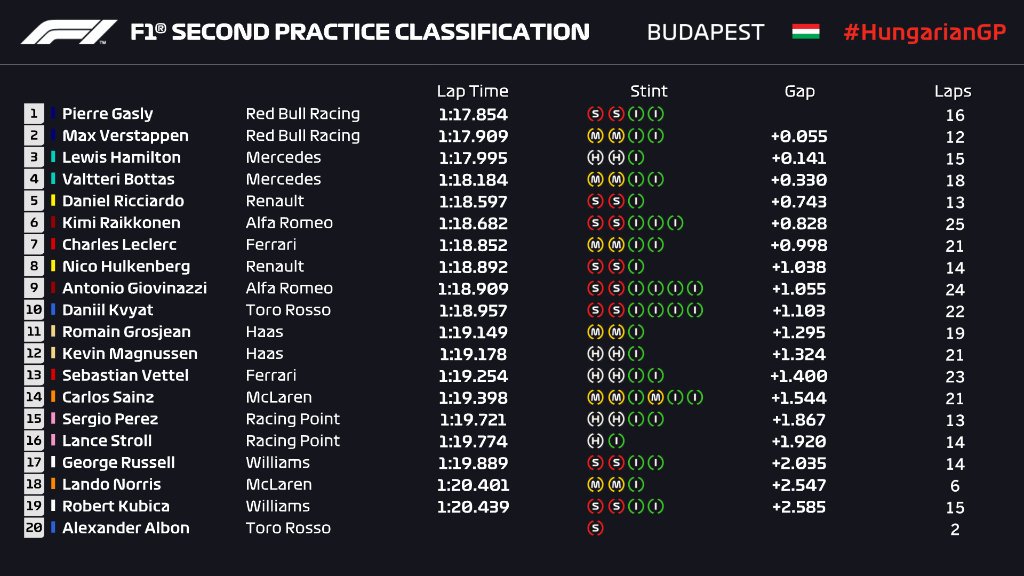 Well, I watched FP1 at mostly fast forward x2. The times are deceiving. Hamilton looked comfortable early on with a margin. You note that he ran mostly mediums. Verstappen actually spun once. At one point half-way through the session both Verstappen and Gasly were running serious laps and Verstappen was 0.6 seconds ahead. Then Verstappen spun and I suspect took it easy the rest of the session. Horner was interviewed, and continued to stress that they were making no driver changes "...for this season."

Titch said:
I can’t remember, was it a good or bad race last year?
Click to expand

I can't remember either, that suggests it wasn't a great race or surely we'd remember it

Johnny Carwash said:
Hamilton cruised to victory so if you like Hamilton it was a great win.If you don’t like him it was boring.
Click to expand

Contributor
Should this be in the Silly Season?

Contributor
FP3 delayed by 10 minutes due to work taking place on the track.

BBC Sports F1 web site: It looks like they've poured an industrial amount of white sand at Turn Four to clear up some oil, and are sweeping it around. 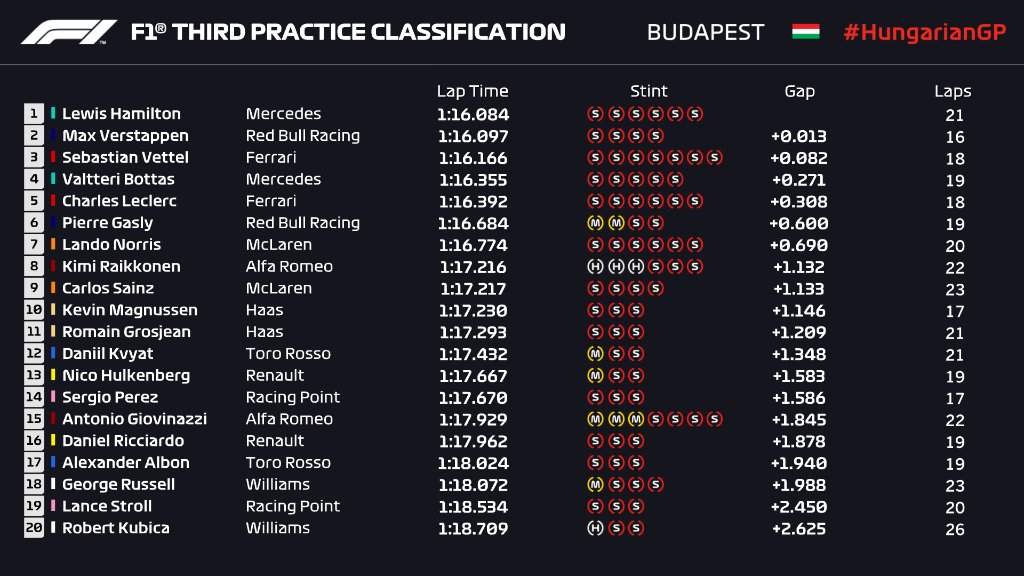 Contributor
That Ferrari must be another car that has been built to be solid. Congratulations to the mechanics, from what we saw and heard they took it in their stride, got on with the job and got the result.

Congratulations to Max Verstappen as well, it has been some time coming but has worked out to be at a circuit where overtaking happens infrequently. A shame that Red Bull don't have a second driver to go for the team championship.

Well, Gasly qualified only 0.878 seconds behind his teammate.

Contributor
George Russell out qualified both Racing Point cars and Ricciardo!! They have improved that Williams, well not the car they Kubica, obviously.

quite amazing to think, considering how successful & highly rated verstappen has been over the last 3 years. that is his 1st pole position you wouldve thought guy like him wouldve had 1 before. but stunning pole lap on circuit i felt would suit a red bull, absoultely aced that final sector to find a quarter of a second on himself & tenth on bottas. as he was 0.12 up on himself but 0.061 down on bottas. but also thats Bottas luck at the moment. chance of a podium in germany crashed, hungary the lap of his life beats lewis & still 0.018 short of pole.

i know this is weird but i was giving driver of qualifying. it wouldn't be verstappen as good as he was it wouldbe to russell in 16th. what a job he did outqualifying both racing points & Ricarddo. so close to making it into Q2. on track where downforce is more important than power

Kubica 1.3 secs off russell. will he last the season & after some research i knew someone had something about kubica thats turned true back in feb & it was Radical F1 who took a bit of stick


Radical F1 said:
- Kubica will not see the end of season. 1 Day too old, 1 Hair too Bald.
Click to expand

F1Brits_90 said:
you make a good point. it could go pearshaped i remember hearing something cant remember if it was testing or a podcast. but someone made great point. kubica up til now its a brilliant feel good point & we are proud that he has got back to F1 which seemed impossible. but once qualifying starts that ends & he becomes just 1 of 20 drivers & if russell outqualifies him by 1/2second the sympathy will vanish
Click to expand