BradMan was down to do this thread, as he seems to not be around

I stepped in on his behalf.

Here we are then, the last race of the season and what a season it's been. Ferrari showed so much promise in testing but then it all faded away as we started to race. All bark and no bite as you might say, Mercedes on the other hand took the championship by the scruff of the neck and certainly got everything out of it that they could. They had a 1-2 finish in the first five races of the season and Hamilton continued his winning streak even after that. It was only Vettel splitting them in Monaco that ended the top two place domination by them on the podium up to then. The Ferrari drivers and Verstappen for Red Bull could only manage the odd trip to the podium or the places just off it. It took until Austria for Hamilton not to be on the podium, even if Bottas had been shoved off a little sooner in Canada before returning again the next race.

I don't know about the rest of you but I was finding it all a bit boring and predictable then. Germany was a bad race for Mercedes (by their terms anyway) with Hamilton back in 9th and Bottas retiring. At the next race Hamilton took the win in Hungary though even if Bottas couldn't quite get back to the form he'd had before.

After the summer break it seemed like things had changed. Mercedes still had a very good car but Ferrari had somehow upped their game and so too had Red Bull, at least Verstappen had anyway. By this point Pierre Gasly had been told 'you've had your chance but it's back to Toro Rosso for you my son' and Alex Albon got the nod instead. Mercedes had still been rarely off the podium and of course Lewis Hamilton cruised to his sixth world chamionship in some style, but thankfully for us the other teams have made more of a fight of it, even if at times it felt like it was just the Ferrari boys fighting one another.

Abu Dhabi being the season finale feels somewhat lacklustre due to the championship having been sorted out a few weeks ago, however some of the other teams have a point to prove and places to gain or lose up and down the table. For them it's a vital race to push as hard as they can. After this race we will say 'auf wiedersehen' to Nico Hulkenberg as he exits stage left. He never fulfilled the potential he appeared to show in F1 which is a real shame, however he is of course a previous winner of Le Mans 24 hr. We also say goodbye to Robert Kubica, his comeback to F1 was a brave attempt to recreate his winning run from before his tragic accident, sadly, that wasn't to be and he ended up a shadow of his former self. You have to say, at least he tried.

This coming race could well be wet (kidding). We know it's going to be dry and it's not the most thrilling track of the season. So don't expect too much of it, just let out a sigh of relief that the season is done and start counting down to F1 2020, if you can be bothered to do so. At least with this race if you get bored of the action on the track you can look at the pretty lights on the hotel

In 2018 your pole sitter was Hamilton and the podium was 1st Hamilton, 2nd Vettel, 3rd Verstappen

Contributor
I cancelled my SkyF1 subscription this evening.
F1 has ceased to deliver.

Contributor
A dull track that will produce a boring race, I hope I’m proved wrong but a doubt it.
J

Johnny Carwash said:
A dull track that will produce a boring race, I hope I’m proved wrong but a doubt it.
Click to expand

Agreed. Let's hope we have some excitement to wrap up the season this year. No rain forecast anyway

The Killers are the headliners for the off-track entertainment and if the race is as exciting as their live performances, it should be pretty good.
Last edited: 26 November 2019

Johnny Carwash said:
A dull track that will produce a boring race, I hope I’m proved wrong but a doubt it.
Click to expand

i dont doubt we will get a terrible race early prediction a 4, but that is down to the cars not the circuit because over the years. ive seen some brilliant F2 races on the exact same layout.

whereas catalunya is the circuit because no cars can make that interesting. a reverse grid race would still put you to sleep


Jimbob said:
The Killers are the headliners for the off-track entertainment and if the race is as exciting as their live performances, it should be pretty good.
Click to expand

is jimmy carr & his sweeping brush travelling over too

Valued Member
There have been floods in Saudi Arabia recently (apologies for the source in this link) Moment Saudi Arabia is hit with ice storm and flash flood | Daily Mail Online so who knows what this race might throw up.

Contributor
Bottas getting a new engine and extra parts that will mean he's likely to start at the back of the grid. Good luck to him fighting his way through then. 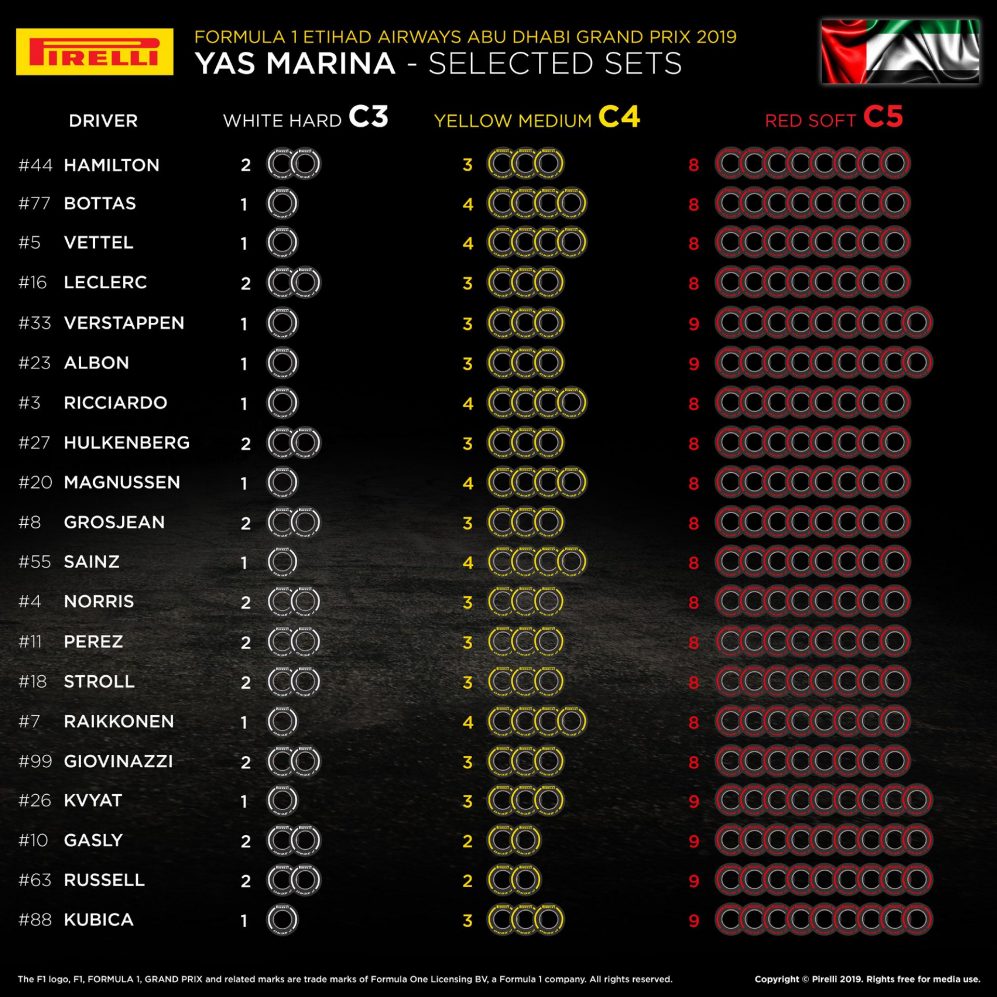 Angel said:
Bottas getting a new engine and extra parts that will mean he's likely to start at the back of the grid. Good luck to him fighting his way through then.
Click to expand

a lot like Leclerc, it will be like old days 1 engine per race weekend. he will be able to whack that engine to max because they wont be saving it for Melbourne. so he will have fun

Angel said:
Bottas getting a new engine and extra parts that will mean he's likely to start at the back of the grid. Good luck to him fighting his way through then.
Click to expand

his weekend isnt getting much better

Contributor
Poor Valtteri, that's a shame for him

Vettel arrives at Abu Dhabi a day late due to his third child being born, so it's better news for him.

Angel said:
Poor Valtteri, that's a shame for him

That is a shame. That couple looked like they belonged together. They had been dating since 2010 and were married three years ago. The Valterri quote on the subject was "challenges my career and life situation bring."

But they are both professional young athletes. Lots of training and travel make up that life and that has probably been the case for both of them. Guessing that there is another reason. Perhaps something to do with the "New Bottas."

Contributor
That announcement sounds just like our daughter and son-in-law. Two weeks later he moved out, the next day his girl friend moved in. Hardly what he was saying a few days earlier.
J

Of course, Lewis went on to win how many championships - three isn't it? - since his last known serious relationship broke up? Maybe we can expect the same from Valtteri.

Jimbob said:
Of course, Lewis went on to win how many championships - three isn't it? - since his last known serious relationship broke up? Maybe we can expect the same from Valtteri.
Click to expand 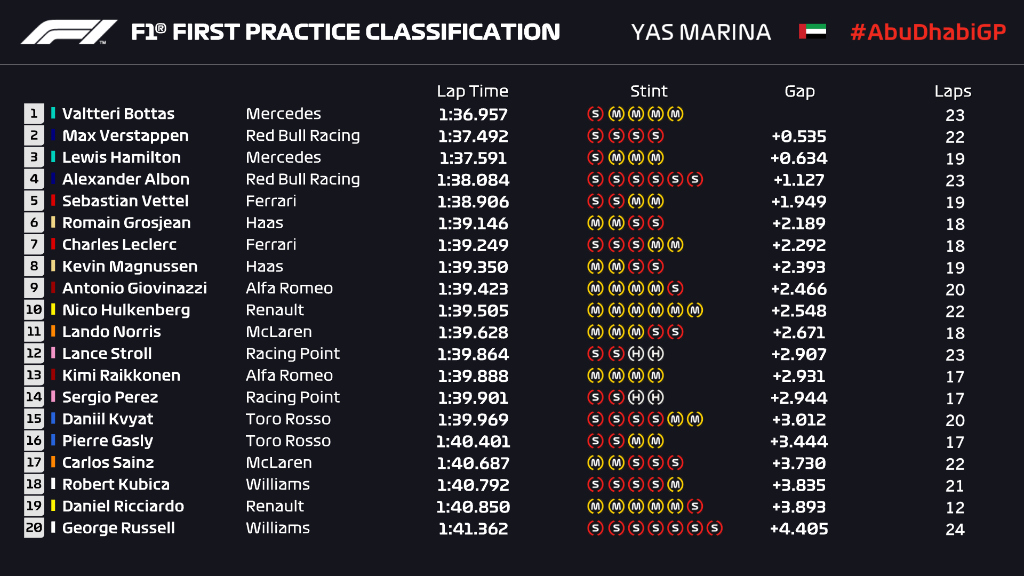 Contributor
Ferrari are putting a new gearbox in Vettel's car as a precaution but they say no grid penalty, I assume that means it's a pre-used one? I can't see how they'd escape the penalty otherwise at this point in the season.