Without a doubt Suzuka is my favorite circuit to drive around (on my PS4) and one of my favorites to watch. It is a proper old school track with lots of tricky technical corners and as we have seen this year the old school tracks are giving this generation of F1 cars the best chance at doing some actual racing.

This track suits Mercedes and Redbull if past form is anything to go by. Mercedes & McLaren Mercedes along with Redbull have shared the spoils since 2004 which is the last time a Ferrari won in Suzuka.

Lewis has 3 wins around here 2 of which came in 2014 and 2015, however Hammy will hope for a better start than last year as he had a shocker dropping to 8th off the line leaving Nico to take the win. I don’t think it will be a walk in the park for Lewis as Ferrari have gained ground.

Seb (3 wheels on my wagon) Vettel has 4 wins in Suzuka all with Red Bull and will be looking to break Ferraris form book in Japan with a win. I certainly wouldn’t count him out despite that 2004 Ferrari stat. He clearly likes the circuit. It does feel like a ‘must win’ for Seb as he is starting to get a little too far behind in the championship battle after Malaysia. However you could easily argue that the Ferrari has had the clear race pace over the Mercedes in the last 2 races. So who knows maybe Seb has the best car in the closing races all he needs is for his luck to change. There is a question over needing a new gear box at this stage after the bizarre crash with Stroll and the strange call to take his steering wheel with him. His behaviour is becoming rather erratic to say the least. But with just 5 races left including Japan we are into the final quarter of the season and Sebs time is running out for the championship challenge. He needs a result here.

Driver silly season is all but over, the big question of the 2nd Williams seat still remains open as does who will be in Carlos seat at Toro Rosso. Hope seems to be fading for Palmer to stay in F1. But I’m sure he will do well across the pond. Personally I’m hoping for a shock announcement of Kubica getting a seat.

So on with the race, another early one I’m afraid. Coffee on standby.

Traditionally Suzuka is a power track which lends itself in favour of the Mercs but in the Red Bull of dominance from 2009-2013 if a car has great downforce then it will be a force to be reckon with.

Valued Member
If the relative paces of Malaysia are continued, the title could well still be interesting. If Mercedes are the third team, Hamilton will need to be at his best to defend his lead. It would be a 2009 situation.

Ferrari really have to win this race if they’re quickest though. Vettel has dropped 38 points he should have had in the last two races.

Mercedes have scored the right results against Ferrari who seems to not make the most of their chances as well encountering reliability issues
Last edited: 1 October 2017

Contributor
I do hope that Ferrari don’t collect penalties because they have to change bits on the car, courtesy of Stroll. If they do it will be the final proof that some F1 rules are totally illogical.

Titch such as not getting disqualified for deliberately driving into someone... Anyway the incident today was just bizarre and you can't blame Stroll ( a former Ferrari academy driver incidentally).

i found tricky get up for 8am. out of practise was up for Martin gridwalk so had no idea about kimi issues so dreading 6am.

But as i said Bottas is under huge pressure cant have another weekend like Malaysia . because as Martin brundle says f1 is a piranha pit. if your not performing there are many queuing to jump in to take your place espically that mercedes seat. Vettel, Verstappen, Riccardio, Ocon Wehirlein & Alonso have all linked or expressed interest last 12mths

Contributor
Oddly enough, I can see Max & Danny getting on a roll now and winning the rest of this season's races. Lewis might well thank them by the end of the season, if he can keep close enough to Vettel each time to prevent him stretching too far into his points cushion.

Valued Member
Certainly will if Vettel keeps throwing wins away.

I'm looking forward to it, up at 0530, and into the garage with a nice strong cup of joe for engine/suspension rebuilding with the F1 on in the background just in case something interesting happens.

ive worked out that lewis statistically wise only has to beat vettel once in 5 races, because even if vettel wins all 5 races & lewis finished 2nd. he will only win title by a point. but also will say that lewis can finish behind him in every race as if a red bull takes a victory in 1 of the 5 races ith vettel 2nd lewis 3rd. then vettel fate is out of his hands because of 3pt gap of 2nd - 3rd not 7pt gap of 1st - 2nd. but highly unlikely vettel can win all 5 without some mechanical failure because Austin with long straights suits Mercedes to a tee. although I will say that's if It wont be straightforward but I feel lewis will get some bad luck in final 5 races, because titles aren't routine wins, just when & damage limitation done

Valued Member
If Malaysia is indicative, they won’t be finishing 1 & 2 every week regardless. That increases the probability of Hamilton losing a race in the first corner somewhere.

Look at the 2010 Korean Grand Prix as an example of what can happen. There were three different title favourites throughout that race...

The spoilers are Red Bulls who have no interest other than winning races sticking two fingers to both Mercedes and Ferrari for not giving them better engines to say the least. An extra incentive is now to provide Verstappen with a bulletproof car seeing both teams supposedly are going to enter a bidding war for him

Contributor
Sebs gear box has been repaired didn't need repaired so no penalty.

Staff Member
Premium Contributor
It does beg the question when does a repair become a replacement?

The only way Ferrari could be sure the box was OK would have been to strip it down and inspect the internals. The teams are supposed to be limited in the number of gear box changes to reduce costs so it gives the impression that the unit is sealed once assembled. Otherwise it would be far cheaper to replace a tiny part in the box than replace the whole unit.

Contributor
I have a bicycle named Trigger's Broom for that reason!

Contributor
6am P2 is on woohoo I'll watch some F1 before going to work. NOPE. Monsoon. 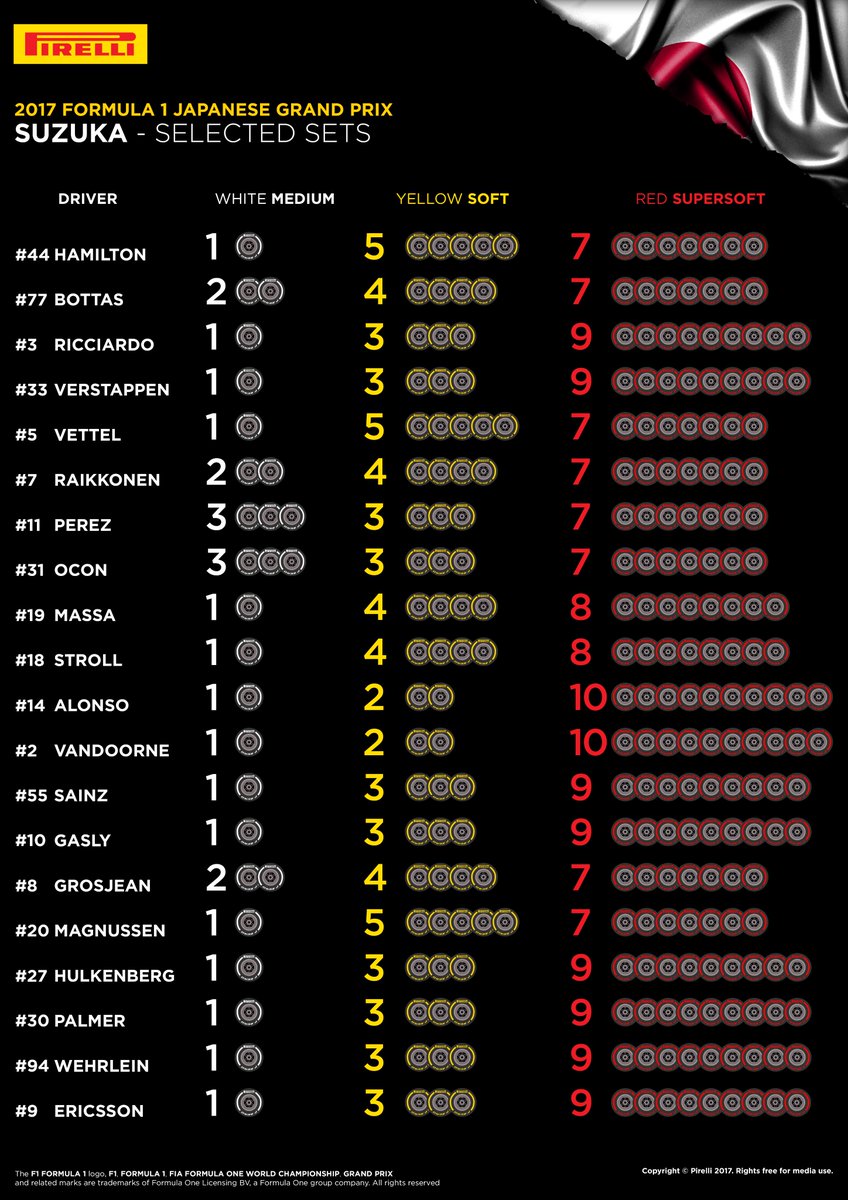