Strewth, Bruce! The Australian Grand Prix is nearly here, ahead of a 2016 season build-up suffering from staggeringly low expectations and the people who are paid handsomely to promote Formula One seemingly trying to kill it with their media comments. So...

Well, the good thing with low expectations is that they can easily be bettered. Although Mercedes may be miles ahead of the field, it is quite possible that Ferrari have closed the gap and actual racing may occur there. The midfield looks rather tighter this year. We have a new team (Haas), Renault are returning and Manor are having a proper go of it!

Add to that a great big unknown with the tyre rules, and a selection of tyres made by each team that will probably look quite daft given that it was made before the new elimination system of qualifying was announced. So tyre strategy and qualification strategy are still rather unknown, which could add some insanity unpredictability.

Melbourne is often a race of high attrition, with the walls too close to the track for those unused to new cars, and unreliability also raising its ugly and seldom seen head. Daniil Kvyat, Valteri Bottas, Kevin Magnussen and Manor will be hoping to actually get to the start this year! Chances of attrition are hit by the exit-stage-left of Pastor Maldonado amid the complete collapse of the economy of Venezuela, but you never know

Despite the existance of Stoffel Vandoorne, the debutants are Mercedes' youth product Pascal Wehrlein, Indonesia's first ever F1 [pay-]driver Rio Haryanto and Jolyon "son-of-Jonathon" Palmer. It seems unlikely any will match Kevin Magnussen's 2nd-on-debut in 2014, however (which was, allegedly, the last time Ron Dennis smiled).

The last five Australian Grand Prix have been won by different drivers - Vettel, Button, Raikkonen, Rosberg and Hamilton. I'd be surprised if Raikkonen won it this year and mystified if Button did. Those same drivers (minus Rosberg) have monopolised pole position here since Giancarlo Fisichella stuck his Renault on pole in a rain-storm in 2005.

Sit back, and lets hope there's something to enjoy. There's life in the old dog yet, despite you, Bernie.
Last edited: 22 March 2016
Click to expand

Premium Contributor
I always love the first race of the season, so if there are any cars left after qualifying, I've got everything crossed that this year will be better than the last few. More mixed up and plenty of racing.

Staff Member
Premium Contributor
Only if Toto gives his permission.

Valued Member
The last Mercedes "academy" driver to make a start in F1, I believe, was Michael Schumacher back in 1991. No pressure then Pascal!

I'm really hoping we will get some decent races this year. The Melbourne track never seems conducive to close racing but then I had low hopes of Sochi last year and that was jolly fun. A decent run between Hamilton and Vettel would be great to see. Meanwhile, Kimi and Nico can nerf one another off behind the leading drivers.

I'm tipping Toro Rosso as the "dark horse" this season and expect McLaren to only be marginally faster than Haas and Manor.

Premium Contributor
I'm expecting nothing at all from MacLaren this year. If I'm proved wrong I will be delighted.

Premium Contributor
By interesting do you mean daft ?

Looking forward to the race, qualifying not as much due to the fact it could be an absurd 1 weekend only idea? & we return back to type for race 2.

Do think Mercedes will disappear off after a few laps after qualifying shananagans are reset with multiple early over takings.

Do think Mclaren may surprise us.

I think the Mercedes' new front wings will both fall off and the Ferraris will sail off into the distance. Well Seb will, and Kimi will have the usual unfortunate incident somewhere near the end.

Contributor
I just hope we get a full compliment of cars to the grid this year. 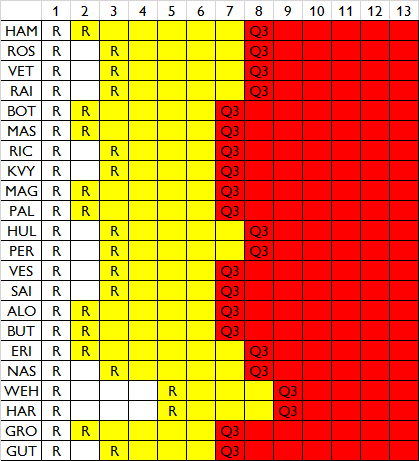 Manor may well be running a long stint somewhere in there, they're really going against the perceived wisdom. Other than them, I don't see many medium tyres making an appearance at all.

It means there is scope for differing selections not just across all 11 teams, but also within each team, as highlighted by Hamilton and Rosberg.
Click to expand

What a load of bollocks!

Staff Member
Premium Contributor
And do tell why you consider the Pirelli supplied information to be equatable to the slang term for the spheroid objects found tucked away in a gents nether regions ??

Contributor
So Manor and Sauber do not expect to get out of Q1, Ferrari and Mercedes think it will be no problem to get into Q3 whilst the rest are expecting to have to work for it.

It also seems to point to plenty of single stoppers.

Please remind me why they have to book their tyres so far in advance.

Valued Member
Well, as I understand it, we may not actually see many teams actually using the medium, starting on the super soft, then moving to the soft. Those drivers who have chosen more than the allocated set of mediums I would assume are keeping options open for the race, and possibly free practice.

do we know if any teams failed to let Pirelli know of their selections prior to the deadline? That may explain the Manor selections?

Personally, I think that it adds a little extra intrigue. Not much, but it is at least a step towards a more free tyre choice, which I have previously been in favour of.

Ted "famously reliable source" Kravitz is predicting the super-soft tyre lasting 4 or 5 laps at Albert Park. I suspect he is actually correct in this regard.
Dare I reiterate my hysterical hemispherical outburst.

I don't know how anyone could make that sort of prediction a fortnight in advance when they don't even know what sort of ambient temperatures we'll get - and they tend to change very quickly down there.

Valued Member
snowy - If the medium is a better race tyre, that will work against Williams, Lotus and McLaren. They can't even test it.

Looking at that table of tyre selections, does remind me of an Olympic Medal table.

That aside, looks like Manor are playing the long games & hoping for 11 other retirees during the race.